We’ve seen all Bollywood actors attending weddings on the silver screen a thousand times. However, it’s a rare sight to catch them at ease, surrounded by their loved ones at the nuptials of friends and family. The real person behind the star letting loose at the sangeet of someone they’ve known all their lives or a warm hug shared with a relative at a reception.

Here are ten times we spotted these tinsel-townies at weddings featured on WeddingSutra.

1. Piya Trivedi, Gaurav Kapoor and more at Rayong Marriott Resort & Spa, Thailand
When Archana and Dheeraj tied the knot, their closest friends from the industry flew in to make the celebrations more special. Pia Trivedi, flanked by the couple, smiles for the camera at their beachside mehndi. Set on the beautiful Eastern Thai coastline just an hour’s drive from Pattaya, Rayong Marriott Resort & Spa, Thailand complemented every mood the wedding presented through festivities that went on for three fun-filled days.

3. Athiya Shetty and the Bachchans at Emirates Palace, Abu Dhabi
At Anushka and Abhishek’s wedding, the power of pink was evident. Athiya looked resplendent in her dusty rose lehenga. First family of Indian film, Amitabh, Jaya and Abhishek Bachchan were also color-coordinated to match the theme. The opulent spaces of the Emirates Palace, Abu Dhabi epitomises luxury living and played worthy host to a glittering guest list. 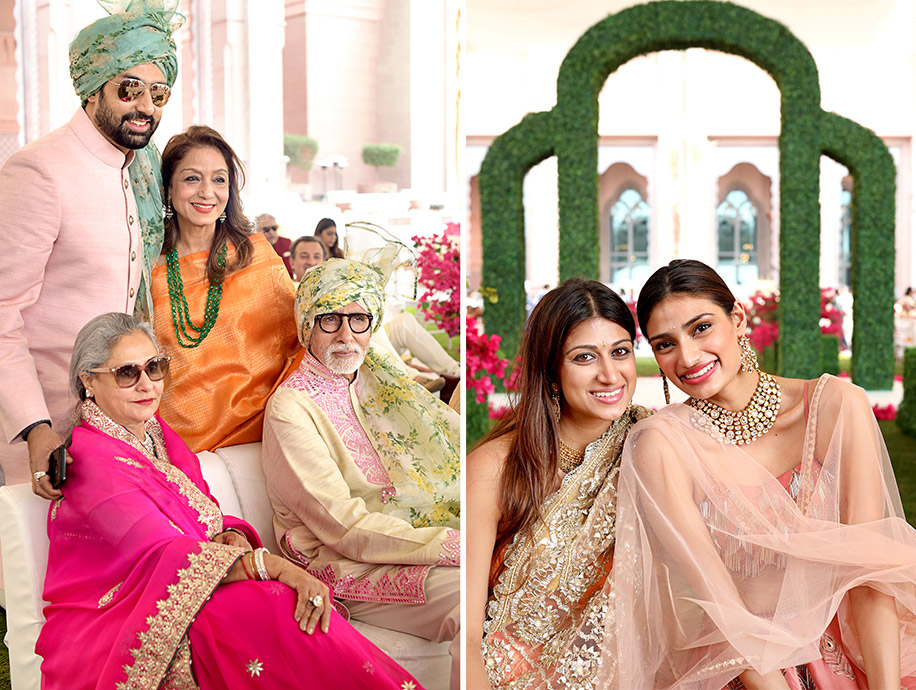 4. Shraddha Kapoor at The Park Hyatt, Dubai
The urge to get into a celebratory mood and indulge in unabashed revelry is irresistible when it’s a close friend who is tying the knot. Shraddha Kapoor is a delight to see as she laughs in an off-white Sabyasachi creation at Eshanka and Harit’s wedding. The Dubai skyline comes alive in these after sunset shots of the Dubai Creek which lies beyond The Park Hyatt, Dubai. A gorgeous, glamorous evening. 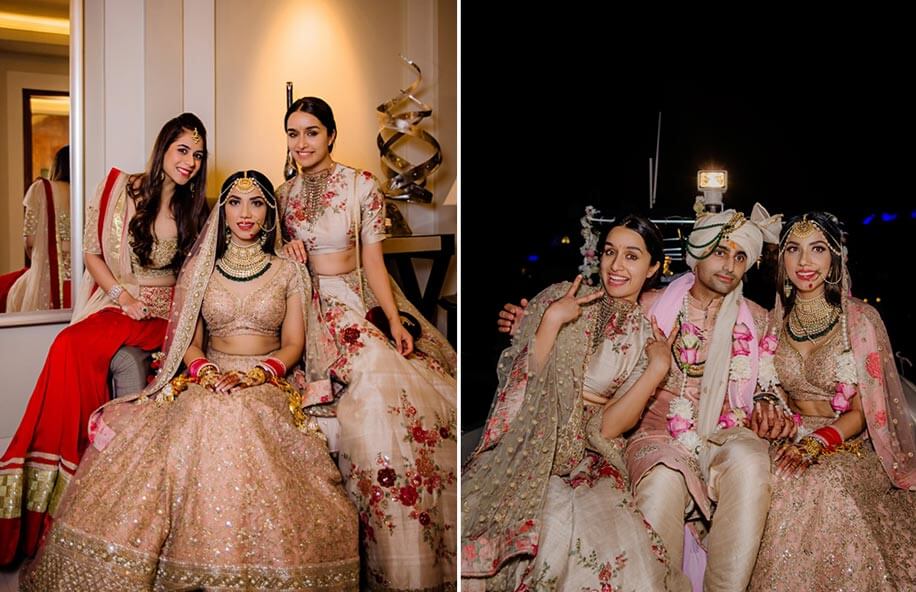 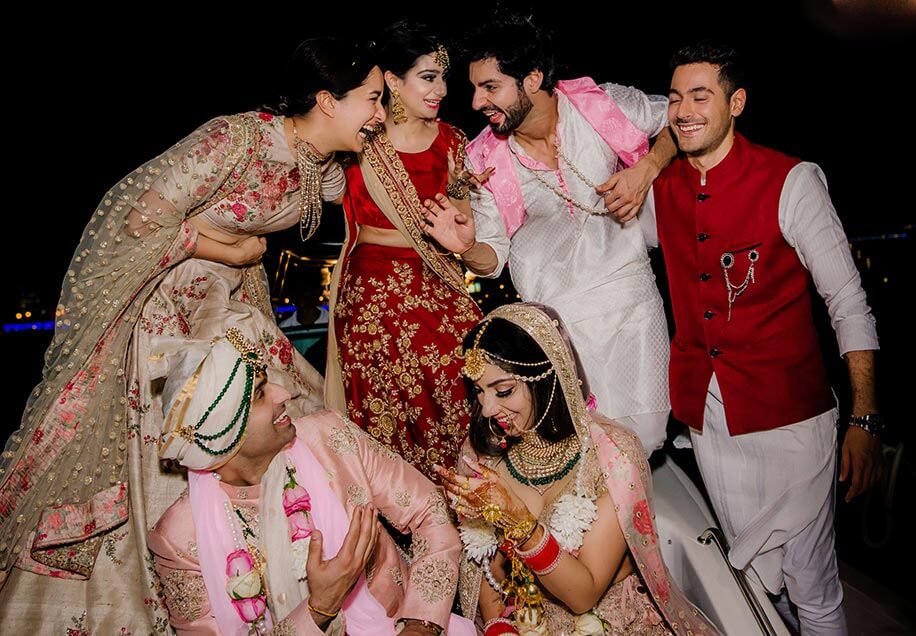 5. Kamal Hassan Shruti Hassan and Akshara Hassan at Goa Marriott Resort &Spa
The vibe is relaxed and easy in Goa where you can send your worries into the wind and let the sound of the ocean soothe you. The Marriott Resort and Spa is a beautifully serene backdrop for what looks like a wild night at Saaksha and Karan’s wedding. Kamal Haasan shakes a leg while daughters Shruti and Akshara pout for the camera and have some fun with the bride.

6. Rohit Bal at Shangri-La Barr Al Jissah Resort and Spa, Oman
The ace designer and enfant terrible of Indian fashion – he’s known for his outré persona and his gorgeous Indian attire that pays homage to the bygone eras of Indian royalty. This is Rohit Bal having a good time at Ananya and Anish’s ‘Brunch and Cocktails’.
A bright day and the sprawling open spaces of the Shangri-La Barr Al Jissah Resort and Spa, Oman was all that this event needed to get its guests in the mood for love. 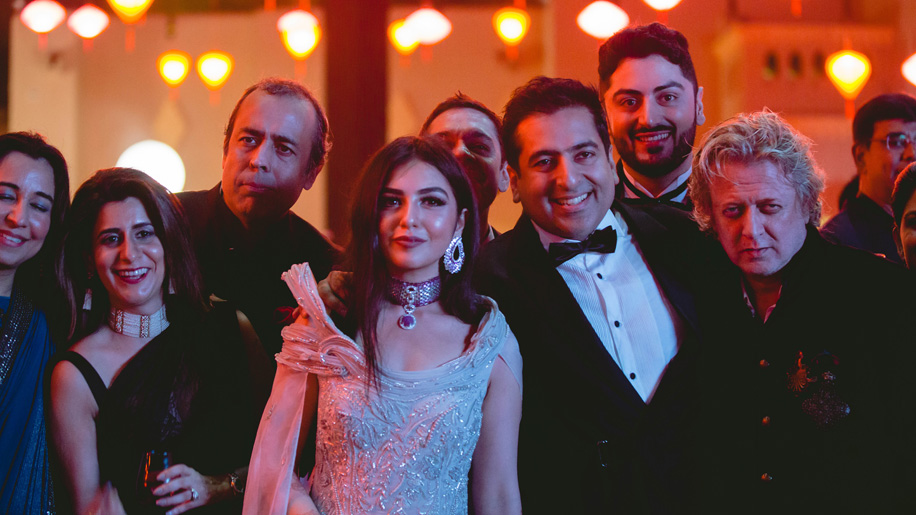 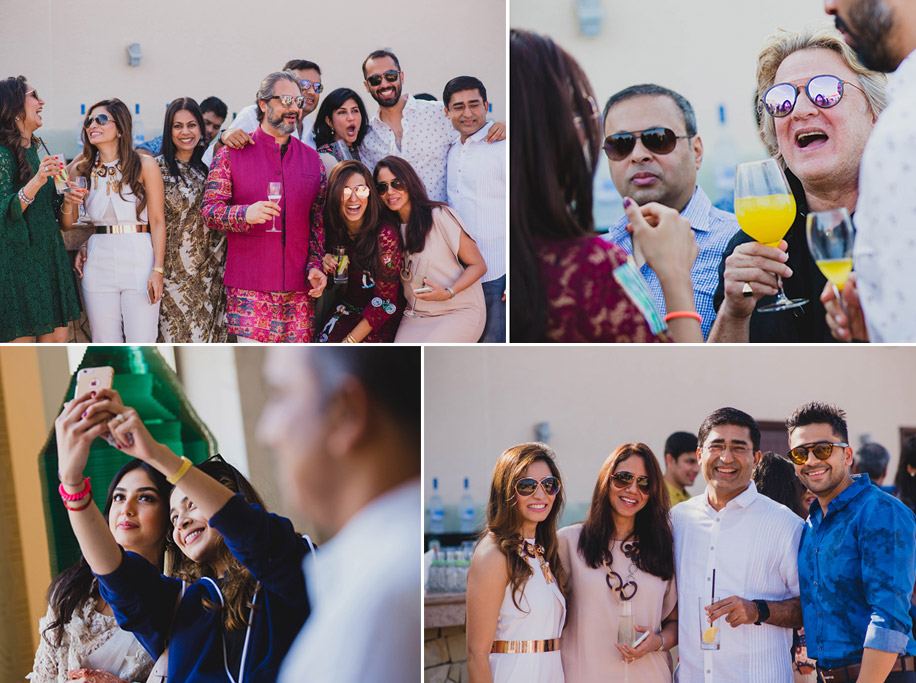 7. Sushmita Sen, Dia Mirza and more on Costa Cruises
Sana and Adel’s wedding was a properly star studded affair. A 4 day cruise through the Mediterranean treated guests to a montage of the shores of Barcelona, Marseilles and Cannes. A series of functions and events saw the likes of the most recognised names of Bollywood such as Sushmita Sen, Dia Mirza, Shilpa Shetty, Malaika Arora and more come together to celebrate their common friend’s big day. 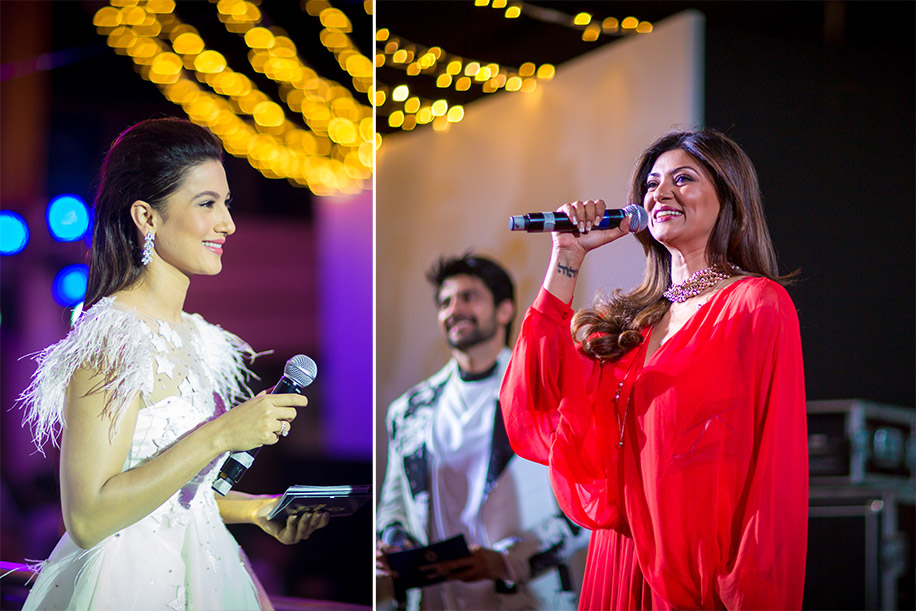 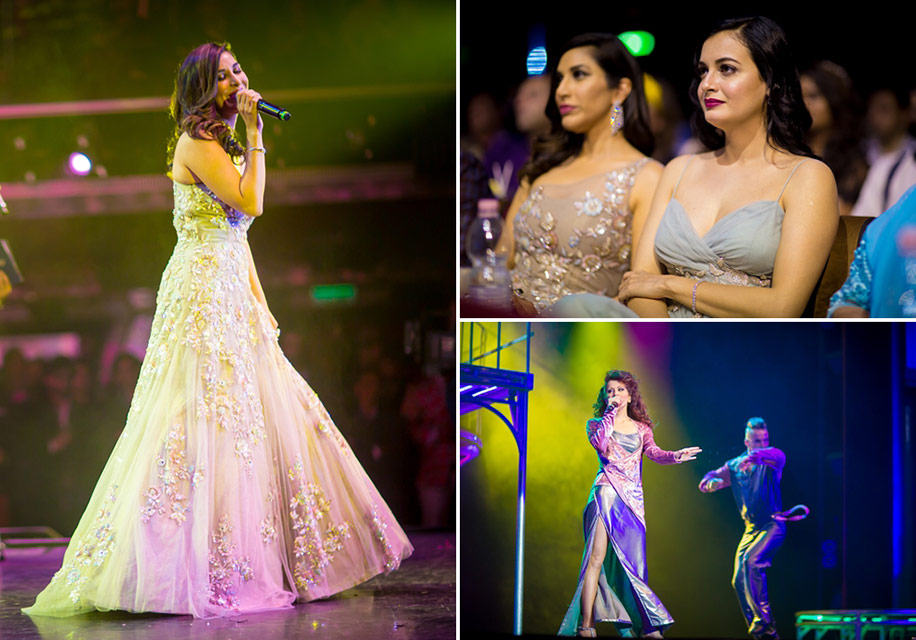 8. Manish Malhotra and Sophie Choudhary, Vienna
If you thought a palace wedding was the grandest way to celebrate one’s nuptials, Sonam and Navin’s lavish celebration may just raise the bar even higher. The duo booked not one, but two historic monuments – the Palais Ferstel and the Palais Liechtenstein – in the gorgeous city of Vienna making their big day an extravagant celebration. The architecture was the star but nearly outshone by many from the Indian glitterati including Manish Malhotra and Sophie Choudhary. 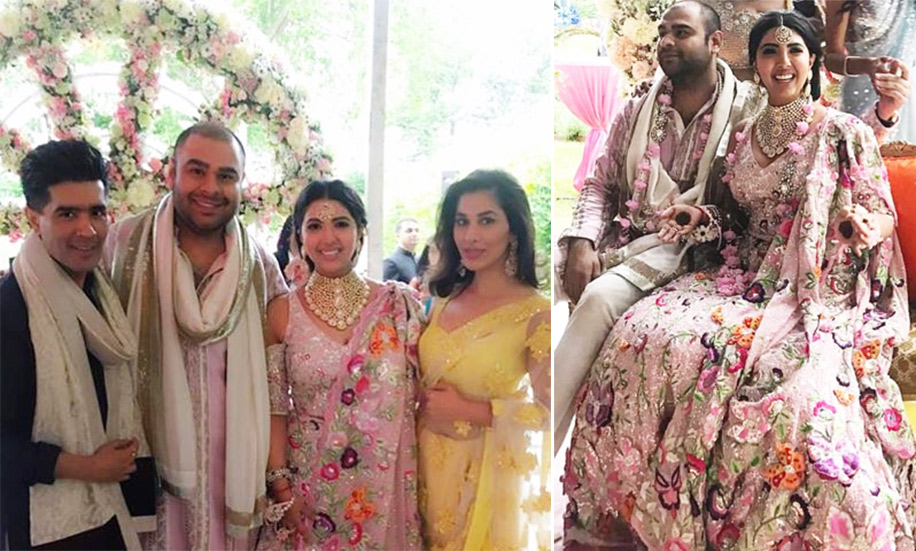 9. The Kapoors at Emirates Palace, Abu Dhabi
When you’re part of one of the biggest Bollywood families ever, it is only fitting that a big, fat Indian wedding is held at the palatial wonder, the Emirates Palace in Abu Dhabi. Look at the opulent interiors, where the Kapoor Khandaan celebrated the wedding, if you can tear your eyes away from Sonam Kapoor wearing Anamika Khanna and a bevy of beauties! Arjun Kapoor looks pretty pleased to be with his cousins too at Akshay and Aashita’s wedding which turned into a grand reunion for the Kapoor family. 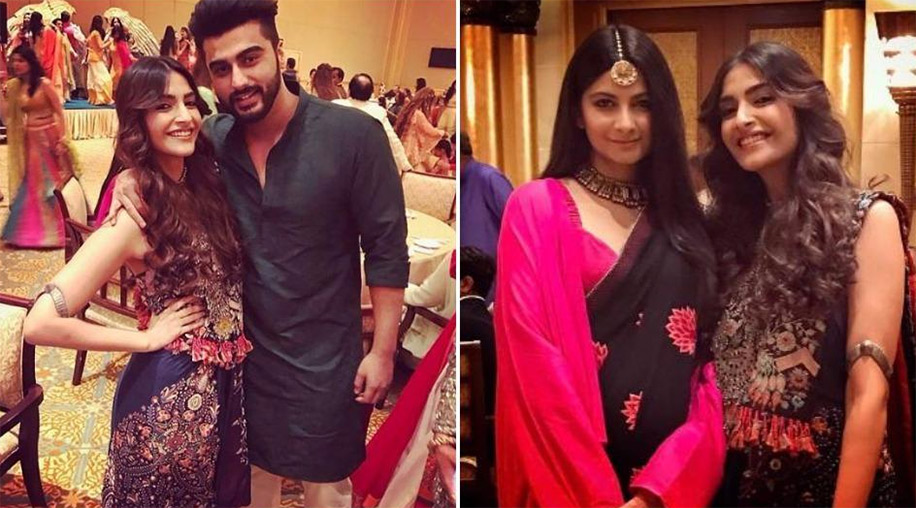 10. Raveena Tandon, Preity Zinta and more, Udaipur
The city of lakes is magic by day and by night. The light turns this high-profile wedding into a fairytale. Covered by the local and international press, the flashlights went off to capture a galaxy of Bollywood stars. We caught Raveena Tandon and Preity Zinta catching up with each other as they celebrated Anu and Sanjay’s union. Others spotted at the wedding were Shilpa Shetty, Manish Malhotra and Sophie Choudhary.

This entry was posted on Wednesday, November 8th, 2017 at 5:59:59 pm and is filed under Celebrity News, Destination Weddings, Travel & Honeymoon. You can follow any responses to this entry through the RSS 2.0 feed. Both comments and pings are currently closed.