A Mehndi Sundowner to Remember

Mehndi celebrations are a joyous precursor to the more emotional main event and offer themselves as a great opportunity to tweak the traditional. Henna Sabhlok did just that when she hosted a Mehndi Sundowner at the family’s private farm in Chattarpur that was nothing short of spectacular.

As dawn broke on the day of the mehndi, the bride was really excited, knowing this would be a day that was out of the ordinary. For one thing, Wedding Duo’s Vishal Chand and Aliya Vij had designed the event. Their inspiration was easy, “The whole evening was an evocation of the bride’s lively, easy-going charm. This was not a single design story but a carnival of elements, an extension of the multi-faceted personality of this young woman. And that’s how a traditional mehndi ceremony was sculpted into an off-beat sundowner, theatrical in every way!”

The décor set the tone to magic. Created to wow a guest list of 600 people, the design was elemental, whimsical and a bit crazy. At the entrance, an ‘Alice in Wonderland’ inspired installation of paper flowers towered over the guests in welcome. The lawns were covered in two canopies – one black, one white. Under the white canopy hung floral chandeliers and lounge seating. Under the black, a surreal dining set up was lit with hundreds of glowing white umbrellas suspended upside down amongst thousands of fairy lights glistening like stars in the night sky.

As backdrop to the bride’s mehndi ceremony, a wall was created out of fresh flowers while giant tea cups overflowing with roses and carnations were hung from a tree wrapped in fairy lights. 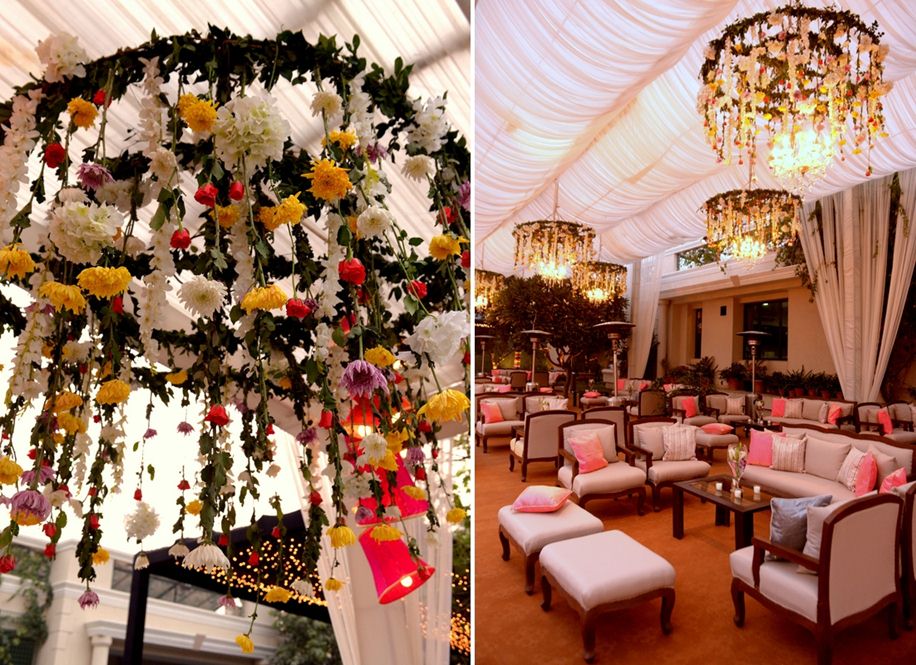 The island bar carried the wedding monogram and over-blown menus of the bride’s favourite cocktails. More whimsy followed with profusions of lycra flowers, Edison bulbs and iron cubes. The bar was further accessorized with shot towers, beer barrels, wine bottle holders and beer caddies. Further down, an elevated wooden hookah corner added a hint of decadence. By the wee hours of the morning the raised scaffolding constructed for the DJ had the bride’s brother and his friends rocking the show! 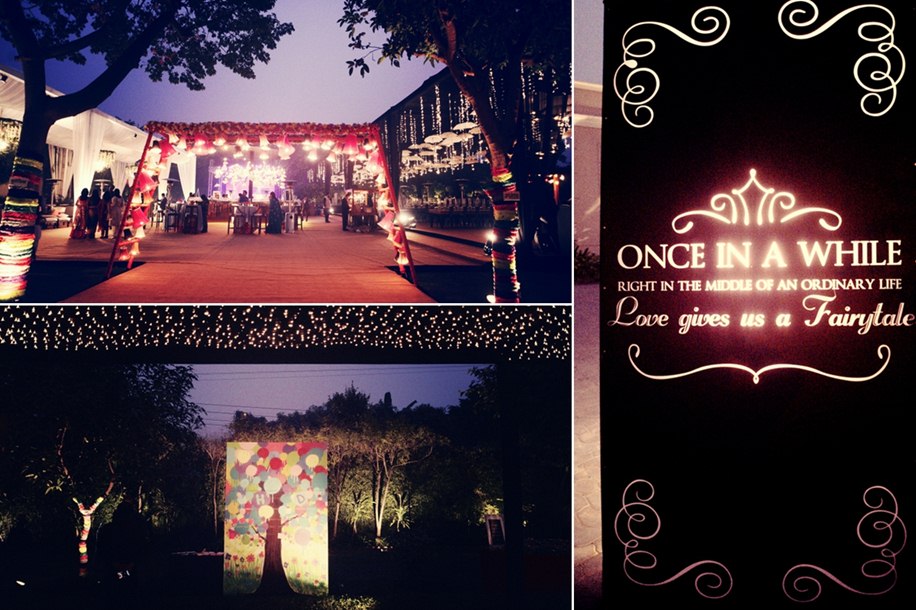 This sundowner mehndi will certainly be regarded as a trendsetter in celebrating the best of traditional customs but with a gorgeous, modern twist. And the happiness and delight on the bride’s face made a memorable evening timeless.

This entry was posted on Wednesday, September 7th, 2016 at 12:39:01 pm and is filed under Wedding Planning. You can follow any responses to this entry through the RSS 2.0 feed. Both comments and pings are currently closed.