A Big Fat Indian Wedding is almost a tradition but even in a country that needs no excuse to celebrate, a Big Fat Indian Engagement is rather unique.

But perhaps Yamini and Vishal started a new trend when they exchanged rings in a ceremony that was preceded by several functions. Their three-day celebration was conceptualized and executed by WeddingSutra Favorite – Evolve Weddings, while Its splendid sights and heartfelt moments were captured deftly by WeddingSutra Favorite – Cinelove Productions. On the banks of the Lake Pichola, the sumptuous Oberoi Udaivilas set the stage for the celebrations. The resort’s architecture pays tribute to the city’s rich heritage while its hospitality is truly resonant with the ideals of Rajasthan, the Land of the Kings.

The festivities began with a grand welcome. In accordance with grand Rajasthani traditions, the sounds of the nagadas filled the air as brightly dressed camels escorted guests to the entrance. As they made their way in, they were flanked by Rajasthani folk dancers whose joyous performances added to the spectacle.

Mehndi
The first function was an easy-breezy mehendi with the tropics as its theme. The Front Lawns of the Oberoi Udaivilas that overlook the lake, formed the perfect canvas for décor elements like life-sized pineapple installations smothered in sunflowers that were erected on the lawns. Large centerpieces comprising flowers and fruit brightened every table. A combination of high and low seating brought a relaxed, casual vibe to the entire event. 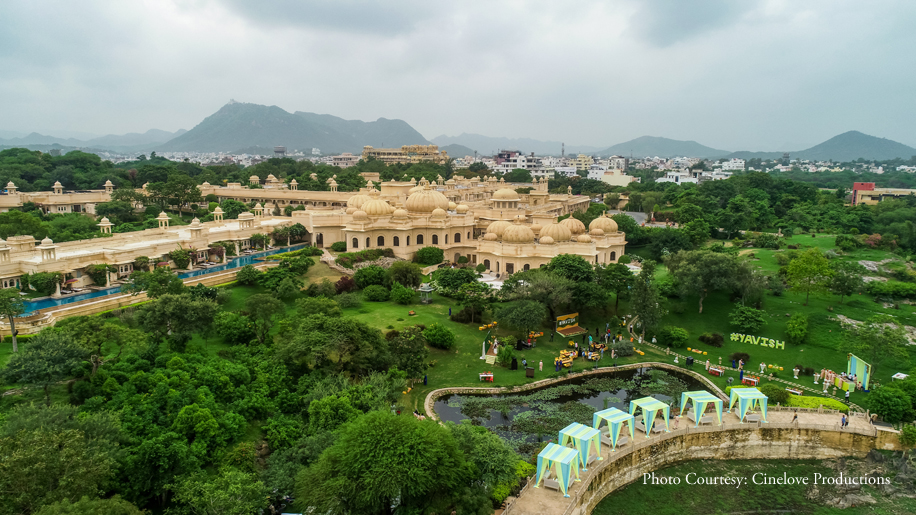 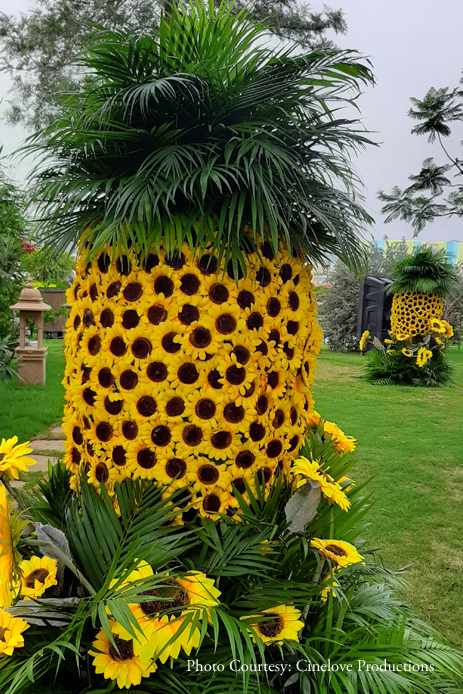 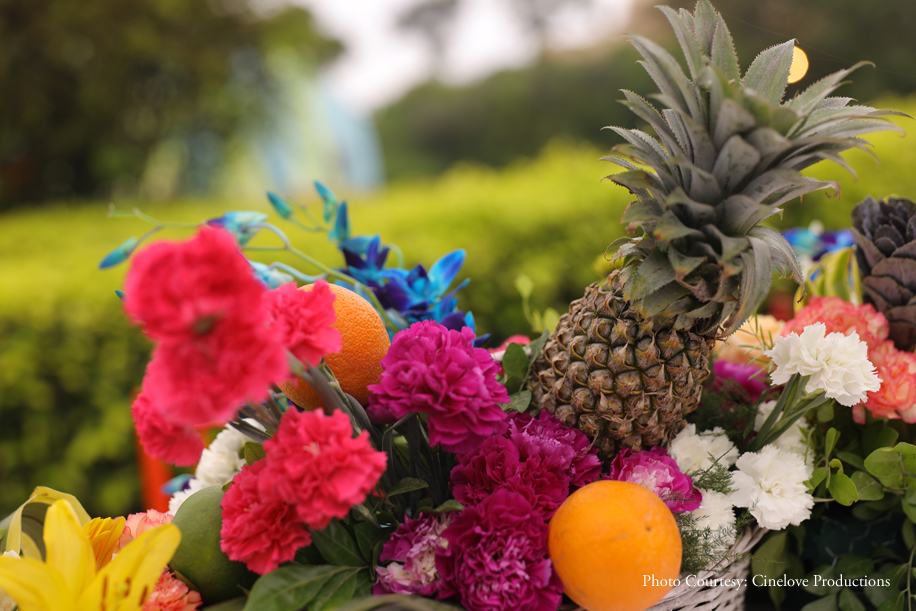 Musical Night
This was no ordinary introduction to the vibrant local culture. The couple’s Rajasthan Musical Night featured none other than folk performer and Padma Shri Awardee Smt. Gulabo Sapera who enthralled the crowds with her enthusiastic performance. Then, celebrity Ravi Kishan who was present as a guest, entertained everyone in his signature Bhojpuri style. The impromptu jugalbandi added to the excitement of the night. The performances ended with a showcase by kalbeliyan dancers which was beautiful. 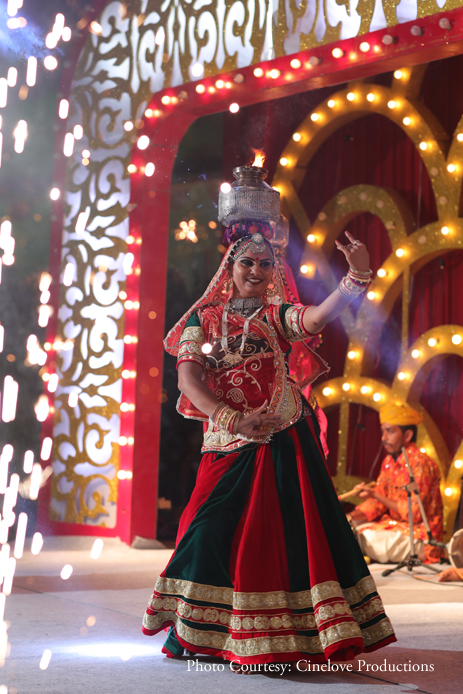 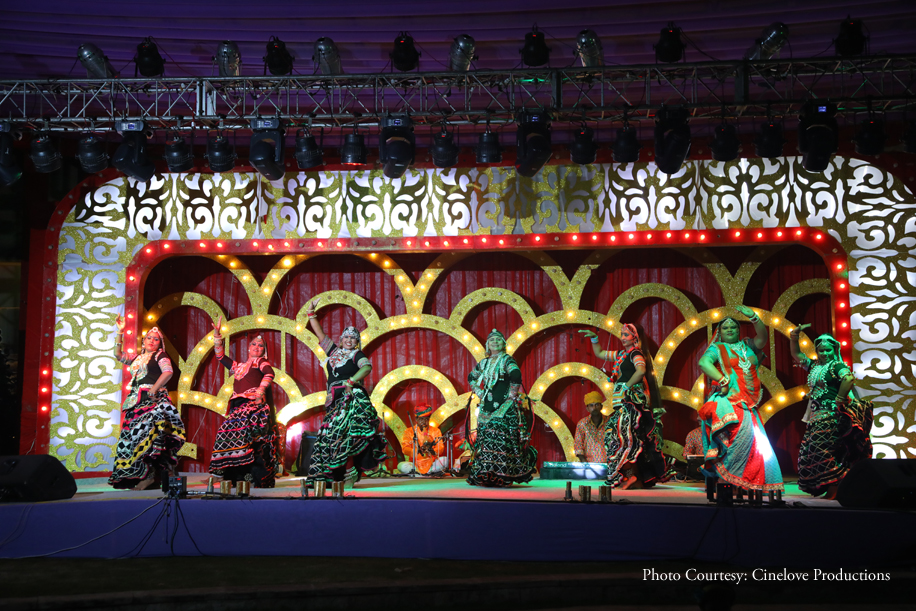 Roka
The following morning began with a Roka ceremony where ten pundits who were flown from Banaras created an auspicious atmosphere with their chants during the pooja. The fragrance of roses and rajnigandhas suffused the air as local varieties of the blooms furthered the regal appeal of the event. 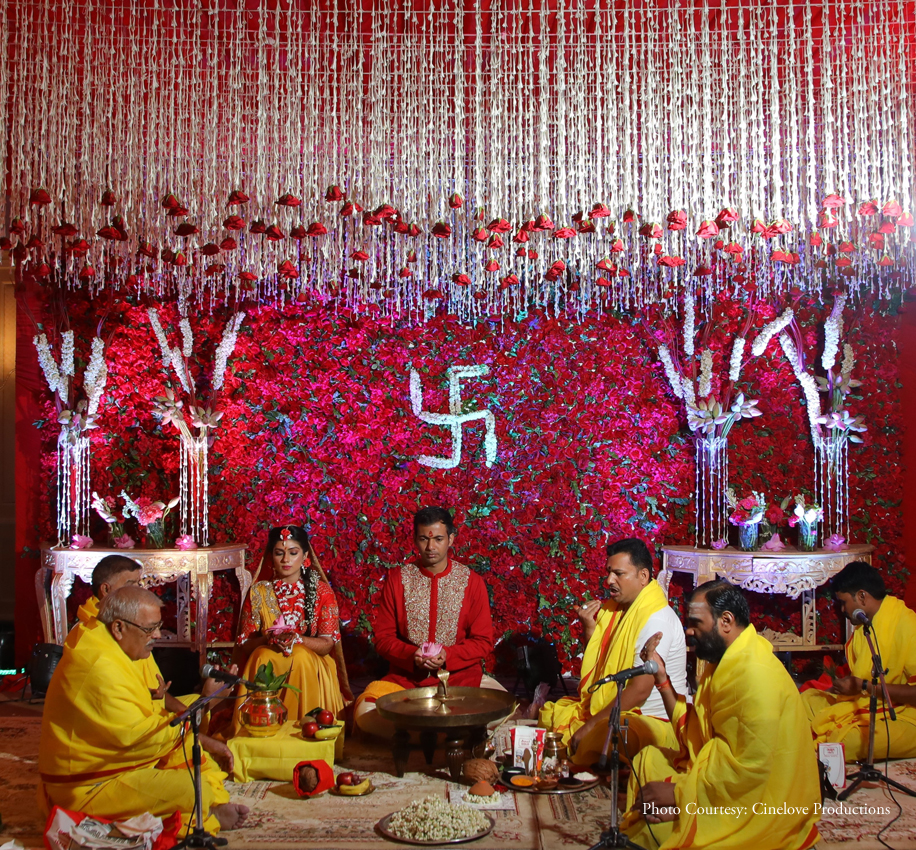 Engagement
That evening, the couple got engaged at the Udaivilas’ Forecourt. Wearing a 30ft long veil, the bride looked stunning as she made her way to the center of the iconic Lily Pond as 400 Pyros around the periphery of the venue brought glamor and drama to the moment.

Then, guests were treated to a riveting performance by singer Shibani Kashyap and a gig by comedian Rajeev Nigam. The fun never had a chance to set as DJ Lalit took over the console and kept the party revving into the wee hours. 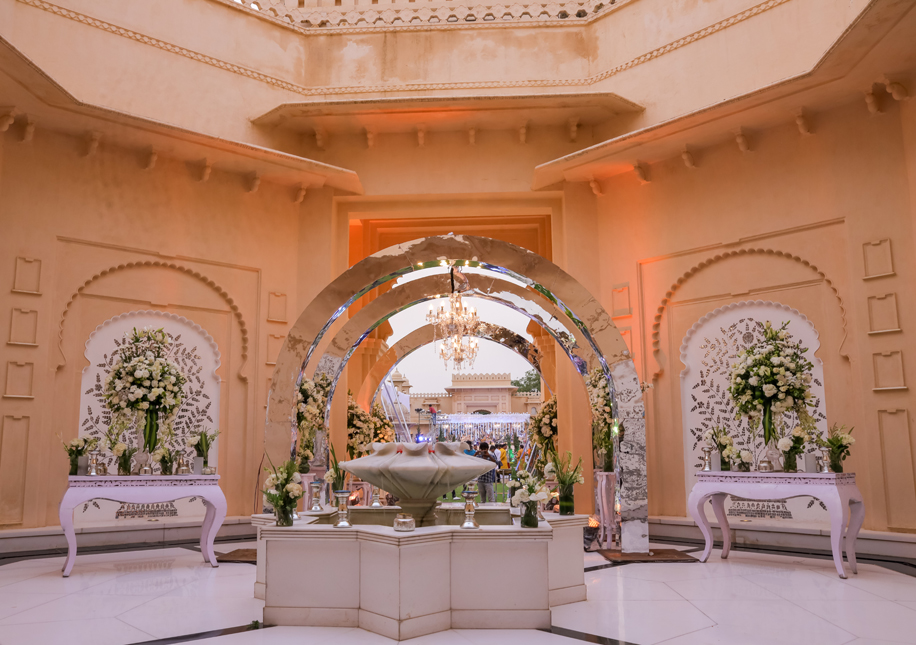 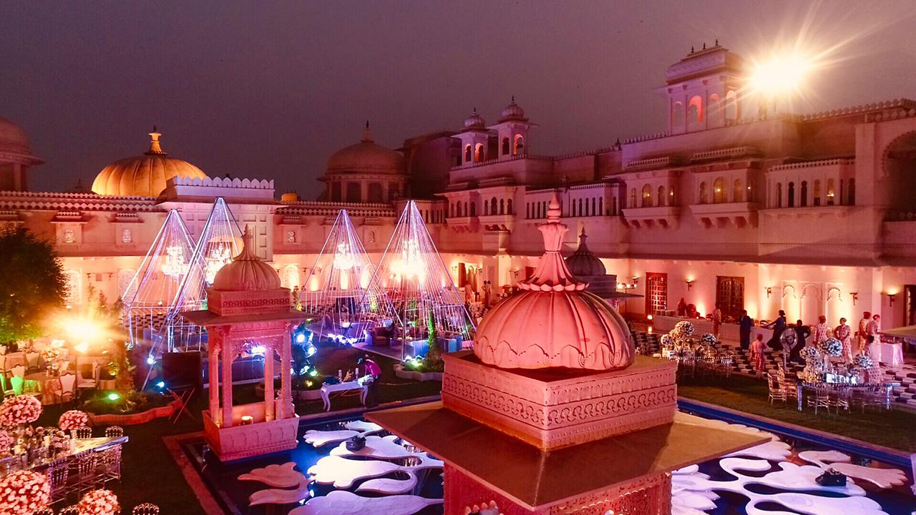 This entry was posted on Saturday, September 7th, 2019 at 8:41:18 pm and is filed under Wedding Planning. You can follow any responses to this entry through the RSS 2.0 feed. Both comments and pings are currently closed.