When VVIP guests arrive on their private jets, and power networking sessions are planned somewhere between the sangeet and the reception, you know it is a wedding of a member of the Billionaire’s Club (B-Club). Take a look at what goes into planning B-Club nuptials, and how India’s top wedding makers are catering to this discerning set.

Move over B-Town (Bollywood) weddings, and welcome to B-Club (Billionaires Club) nuptials where no request is considered too small, and no detail can be overlooked. India’s top wedding planners and bespoke service providers share that B-Club weddings almost always include guests arriving on private jets or chartered planes, privacy is given top preference (hotels, wedding planners and service providers have to sign Non-Disclosure Agreements), and bespoke luxury services are made available that take care of all the special requirements of guests. 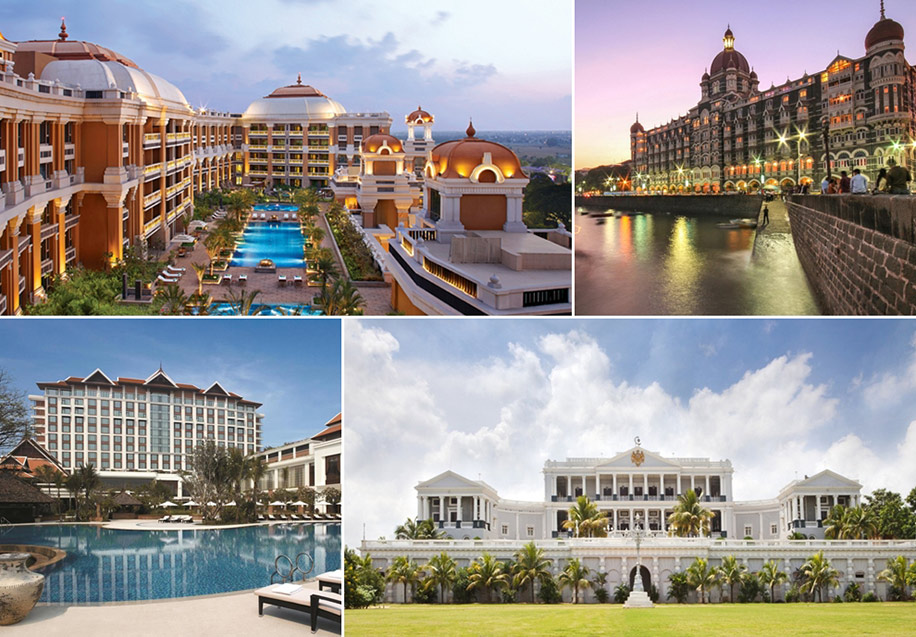 According to Pawan Mirchandani, founder of Horizon WIE, one of India’s top wedding planning companies, “There are destination, glitzy and extravagant weddings – and then there are B-Club weddings which are several notches higher on many fronts. Every little detail of B-Club guests has to be considered when planning these weddings – from their room requirements, meal preferences, accommodating personal staff and security, and even ensuring that boardrooms or meeting rooms are primed for power networking sessions.”

Many members of India’s business families typically go to the same schools (think Cathedral and John Connon School, Dhirubhai Ambani International School and Ecole Mondiale World School in Mumbai; Doon School in Dehradun, and Modern School in New Delhi). Many of them also graduate from the same Ivy League colleges. As a result, B-Club marriages become a sort of reunion for old friends, and more importantly, business contacts.

When it comes to catering for B-Club events, top companies such as FoodLink, headed by Sanjay Vazirani, has served up world-class cuisine at VVIP Indian weddings everywhere from India to Italy. Many B-Club members prefer to fly in their personal chefs to rustle up familiar dishes or serve them especially when they attend destination weddings, instead of relying on the hotel’s staff.

According to Mumbai-based Ekta Saigal Lulla, the trend among the younger B-Club members on the food front is not to invite traditionally famous food people from different parts of India to cater to their weddings. Rather, they prefer flying in their favorite gourmet restaurants’ fare from Mumbai and New Delhi, or dessert specialists from Europe. Ekta elaborates, “Many elite brides and grooms don’t want the typical dosa stalls or ‘chai walas’, ‘paan walas’ and ‘sherbet makers’… Instead, they prefer inviting their favorite pizza, burger, waffle and ice cream brands to neatly package and serve their fare at one or more functions. Even luxury tea and coffee chains find a place at luxe destination weddings, and the menu is planned accordingly. Think English Breakfast tea in the mornings, Masala Chai through the day, and Chamomile post lavish dinners.”

Wedding gifts for guests at traditional B-Club weddings are chosen for impact, not price. Exclusive collectibles from luxury brands such as Ravissant and Lladro still find plenty of traction among the elite. For example, at Shashwat Goenka’s January 2016 wedding, guests reportedly received silver items from Ravissant in their goodie bags, as well as a carpet designed by Paresh Maity, India’s famous Padma Shri awarded painter. Shashwat Goenka is the scion of the RP-Sanjiv Goenka Group. Lladro, the Spanish luxury porcelain company, is known for its sculptures of Indian deities such as Ganesha which are immensely popular as wedding favors. At Swati and Ajay Piramal’s daughter Nandini’s Jaipur wedding in 2009, select guests reportedly got a specially designed perfume made in France. Today, everything, from Mont Blanc pens to personalized Louis Vuitton Monogram handbags and wallets, classic Burberry scarves to luxury watches, gold-embossed Bhagwat Gita collections and limited-edition paintings by prized artists are preferred by B-Club patrons as wedding favors.

Couturiers like Manish Malhotra, Abu Jani and Sandeep Khosla, Sabyasachi Mukherjee and Monica and Karishma (JADE) continue to be top draws among B-Club fashionistas. Makeup maestros such as Mickey Malhotra, Namrata Soni, and Ojas Rajani have their appointment calendars booked by illustrious families who want to look distinct from other well-heeled guests at their multi-crore weddings.

When it comes to entertainment, celebrity dance instructor Rajendra Masterji juggles high-profile bookings from B-Club clients who want him to teach them how to swirl to the latest beats at those high-profile sangeet events.

B-Club wedding memories are captured by talented companies such as Reels and Frames, WeddingNama, The Photo Diary, Stories by Jo Radhik, Cupcake Productions, DotDusk Studios, Ramit Batra, Colorblind Productions, CoolBluez, Hitched & Clicked, among others. According to Anand Rathi, founder of Reels and Frames, “Most B-Club marriages are kept very discreet and all wedding teams especially photographers are given strict instructions to ensure the privacy of photos. However, younger members of the B-Club fraternity are increasingly sharing pictures and videos of the celebrations and customized fashions on channels like Instagram, which is perhaps the only place one can have a peek at the gorgeous but guarded celebrations.”

Wedding venues are, of course, chosen after much deliberation. Here are some exclusive hotspots which B-Club families favor for their nuptials.

1. Umaid Bhawan Palace, Jodhpur, Rajasthan
Umaid Bhawan Palace, which is managed by the Taj Group of Hotels, is one of the world’s largest private residences and includes a private museum and marbled squash courts. Close by lies the well-preserved Mehrangarh Fort which is a popular venue for royal dinners and luxury soirees.

3. Al Bustan Palace: A Ritz-Carlton Hotel and Shangri-La Barr Al Jissah Resort & Spa, Muscat, Oman
Set in the middle of an exquisite garden between the dramatic Al Hajar Mountains and the Sea of Oman, the massive Al Bustan Palace offers picture-perfect outdoor and indoor backdrops for dazzling weddings. With a spectacular lobby and impressive ballrooms, this gorgeous Ritz-Carlton property has become a name to reckon with in the wedding venues sphere. The other jewel in Muscat’s crown is the sprawling Shangri-La Barr Al Jissah Resort & Spa which comprises three hotels in one complex, each with its own distinctive attractions such as ballrooms with crystal chandeliers, the scenic Turtle Beach, and standout architecture.

4. Taj Falaknuma Palace, Hyderabad, Telangana
A regal structure dating back to the 19th century, the Taj Falaknuma Palace in Hyderabad is also the Hyderabad residence of Princess Esra belonging to the Asaf Jah Dynasty of Hyderabad state by marriage. Offering a grand view of the city from its elevated ramparts, this hotel is close to iconic landmarks such as the Charminar.

5. Taj Mahal Palace, Mumbai
With a vantage view of the historic Gateway of India, Mumbai’s iconic Taj Mahal Palace has become the top choice as a wedding venue for many Mumbai-based business families over the years. Built in 1903, it offers stunning views of the Arabian Sea and plenty of impeccable indoor and outdoor venue choices (for members only) for weddings.

6. Taj Palace, New Delhi
The Durbar Ballroom at the ever popular Taj Palace New Delhi has hosted many elite wedding soirees and continues to be one of go-to wedding venues for wealthy families based in the capital. Prized for its location in the heart of New Delhi’s diplomatic enclave, the hotel offers six acres of lush surroundings for dream weddings.

Who Wed Here: Nayan Raheja of Raheja Developers wed Kashish in 2013, and his grand reception held here was attended by the who’s who of India’s corporate and business worlds.

7. Grand Hyatt, Goa
This luxury resort in Goa is spread over 28 acres of verdant gardens and is flanked by a beach where guests can unwind and relax with the waves lapping their toes. Its distinctive Indo-Portuguese palace-style architecture includes regal rooms, spacious banquet facilities and beautiful lawns for magical sunset weddings.

Who Wed Here: Karan Adani, son of billionaire Gautam Adani wed Paridhi Shroff here in February 2013. Paridhi is the daughter of Cyril Shroff, who is the co-owner of one of India’s top law firms. In December 2016, Isheta Salgaocar, daughter of Raj and Dipti Salgaocar, wed Neeshal Modi, younger brother of jewellery baron Nirav Modi. The Salgaocars are one of Goa’s most established business families. A part of this wedding’s celebrations was held at the Grand Hyatt and was attended by Mukesh and Anil Ambani who are Dipti Salgaocar’s brothers.

8. The Ritz Carlton & Emirates Palace, Abu Dhabi, UAE
Located in the heart of Abu Dhabi, Emirates Palace boasts of 85 hectares of beautiful gardens and stunning views of the Arabian Gulf. The Ritz-Carlton Grand Canal in Abu Dhabi is another regal structure in the UAE capital. Its design was inspired by the Italian Renaissance aesthetic. It offers a private beach for seaside weddings, alongside sprawling ballrooms and gardens with the backdrop of the grand Sheikh Zayed Mosque.

Who Wed Here: Hong Kong-based businessman Dhiraj Wadhwani and Sheryl Buxani tied the knot here in September 2013. Sheryl hails from the established and elite Buxani family who sell high-end diamonds and jewellery under the Temptations brand. Anand Jain, the owner of Jaicorp Limited, also hosted his son’s wedding in Chiang Mai which was attended by members of the Ambani family.

10. ITC Grand Chola, Chennai
Located just 8km from the Chennai domestic and international airports, the ITC Grand Chola is a majestic structure that has hosted many glittering society weddings in Chennai over the years. It offers service apartments, banquet halls, and world-class dining spaces.

Who Wed Here: Nayantara, daughter of Chennai-based Bhadrashyam and Nina Kothari, wed Shamit Bhartia, son of Shobhana Bhartia, chairperson of The Hindustan Times Group in January 2014. Shamit is the grandson of noted billionaire KK Birla. and some of their wedding functions were held at the hotel. Nayantara’s maternal uncles – Mukesh and Anil Ambani – made up the glittering guest list.

This entry was posted on Friday, June 2nd, 2017 at 2:32:23 pm and is filed under Celebrity News, Destination Weddings. You can follow any responses to this entry through the RSS 2.0 feed. Both comments and pings are currently closed.