Anupama Shenoy speaks to Mana Shetty and Sharmilla Khanna co-organisers of Araaish. WeddingSutra.com is proud to be associated with Araaish as the digital partner.

Life is a journey about finding that place within ourselves where we are most at peace. Some women arrive at this point through creative pursuits. Others strive for professional excellence or set aside personal goals to focus on family. For Mana Shetty and Sharmilla Khanna, it lies in working for Save the Children India. Every year they pool in their talent and resources to put together Araaish, an exhibition of exclusive lifestyle products. Araaish raises awareness and creates sustainability for Save The Children India, an NGO set up by Mana’s mother, the late Mrs Vipula Kadri. Araaish was set up in 2007 as an ode to her commitment to the empowerment of the underprivileged, and her efforts over 28 years. 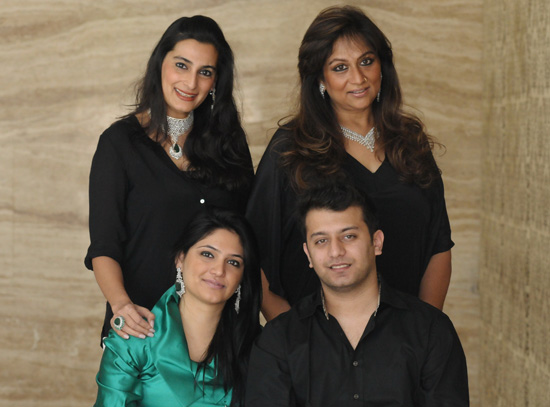 Mana is now totally involved with spearheading the operations of Save The Children India (STCI) which has won several awards and their hospital in Latur, the best NGO-run hospital. While such awards do hold value, Mana sees it more as encouragement from the government to stride ahead. Sharmilla Khanna – event manager & choreographer, Mana’s friend for 30 years had also worked closely worked with Mrs Kabri before co-founding Araaish. “It is very different from all the other fund-raising exhibitions that you hear of,” Sharmilla explains. “It is a fun day for women to shop for exclusive products and relax with good food and music.” Sharmilla merchandises for the show, choosing products on the basis of their exclusivity and uniqueness, and gives direction to the creative energies of the participants.

So how did they come up with this idea? Sharmilla recalls that she didn’t want to do an ordinary fashion show as a fundraiser. “It doesn’t hold any novelty. With so many Fashion Weeks, we wouldn’t get the best participants,” she rationalizes. A lifestyle exhibition, she felt would be a better idea. And what a raging success it has been. Every year Sharmilla is deluged with requests from designers/ stores wanting to participate in Araaish- after all, the exhibition attracts some of the city’s most affluent women with a love for all things creative.

While Mana and Sharmilla’s efforts have transformed lives, they have noticed that being involved with charity has changed their lives too. Now, with Araaish, Sharmilla puts to more use her impeccable aesthetic sense and celebrity status. “It’s not just about raising funds. It is a full-time activity,” she says. Mana feels that being involved with STCI has made her a better person. She feels like a guardian angel to the STCI children who she says shower her with unconditional love. Her own children visit the STCI projects and marvel in wonder at the possibilities that open up for the underprivileged children. “And these moments turn into life’s most special moments”, she quips.

This entry was posted on Tuesday, September 4th, 2012 at 2:41:47 am and is filed under Bridal Fashion and Beauty. You can follow any responses to this entry through the RSS 2.0 feed. Both comments and pings are currently closed.