Denver’s Tremendously Romantic Proposal to Kimberly in Paris – The City of Love!

Indulge us a little – imagine the most romantic proposal you can. Now imagine the romance intensified by at least 100 times! Well, congratulations – you’ve come pretty close to the sweet story of Kimberly and Denver that features an extensively planned proposal which will have you wishing for a love story just like this.

The duo shared with us photographs from Shangri-La Hotel Paris against the backdrop of the clear blue sky and the Eiffel Tower as well as their trip to Paris Disneyland thereafter and we are swooning! 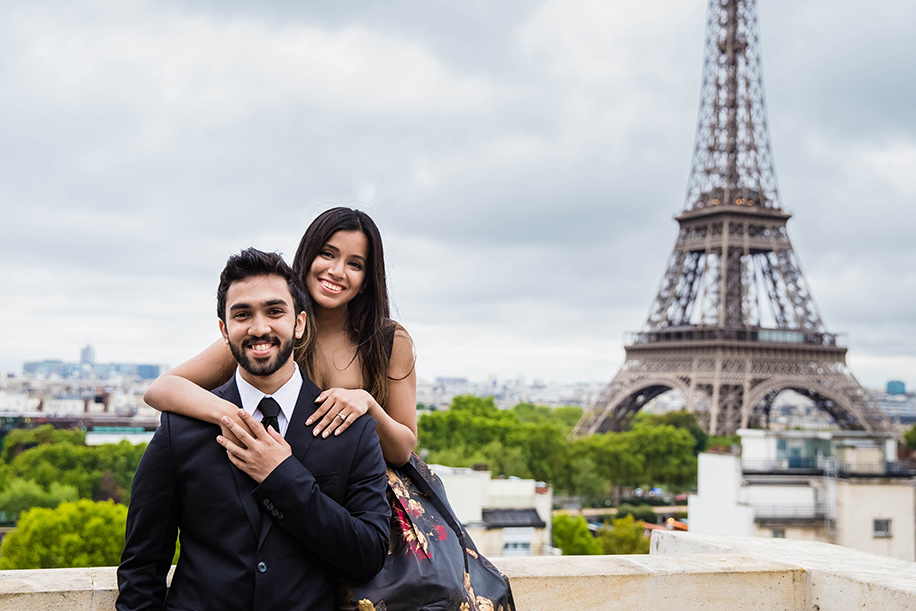 How We Met
Denver and I have been in Dubai all our lives, we studied in the same school and lived three blocks away from each other for the last fifteen years. We always knew of each other but only became close about six years ago, once I moved back to Dubai after graduating from college. Before we knew it, we found ourselves talking to each other for hours until sunrise, and conversations that went on for five hours seemed like they had lasted only five minutes.

In each other’s company, we felt like we were home. Which is probably why it didn’t take him long to ask me to be his girlfriend. He recreated the entire scene from the sitcom Friends where Chandler proposed to Monica; the entire room glittering with candles before asking me to date him. If you hadn’t guessed already, both of us are addicted to the show and the elaborate gesture was so sweet, I said a ‘yes’ immediately!

Proposal
After all the efforts he had taken to propose to me to just be his girlfriend, I should’ve known that when the time came for the big proposal, he would definitely pull out all stops – and he did!

Den and I are food bloggers and had been invited on a Cheese Tour around Southern France. We decided to extend our trip and spend four days in Paris because you can’t go to France and not go to the city of lights! On our first night in Paris, Denver took me to  Paris for champagne at their pop-up terrace bar, followed by dinner at their Two-Michelin-starred restaurant. As I walked into the champagne bar, I noticed it was empty and there was a photographer clicking pictures of the Eiffel Tower. Moments after we were seated, the photographer approached us, introduced himself as the ‘hotel photographer’ and asked if he could take a few pictures of us with the view to which we happily said yes. 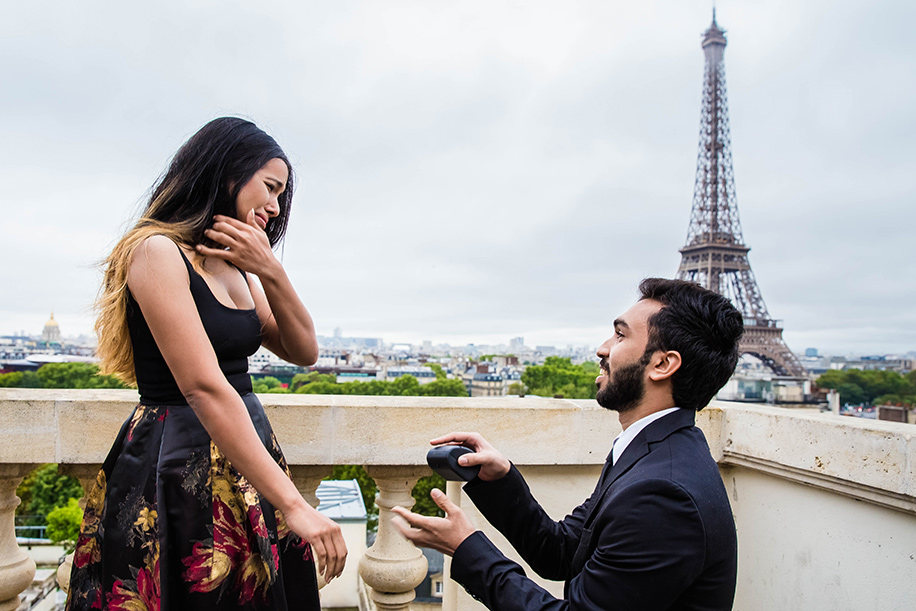 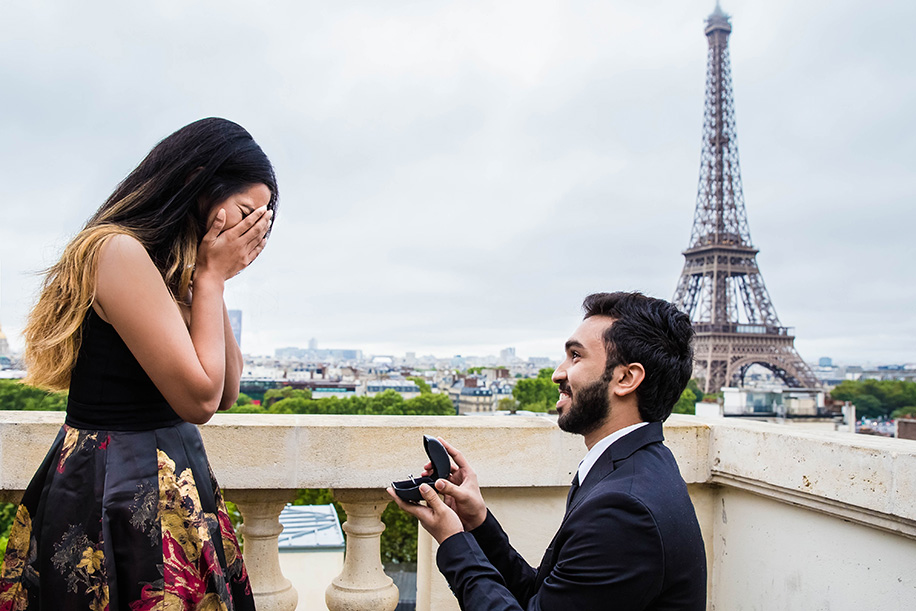 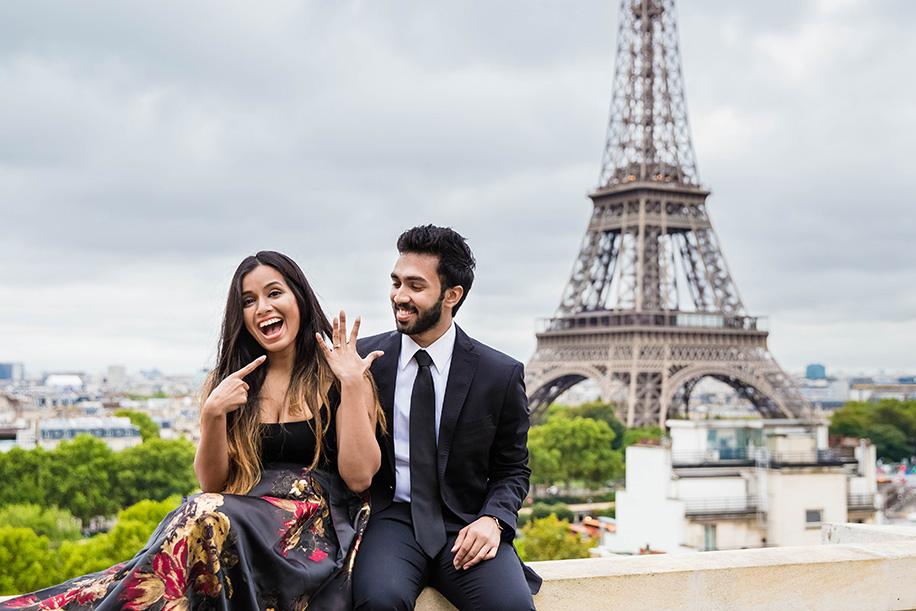 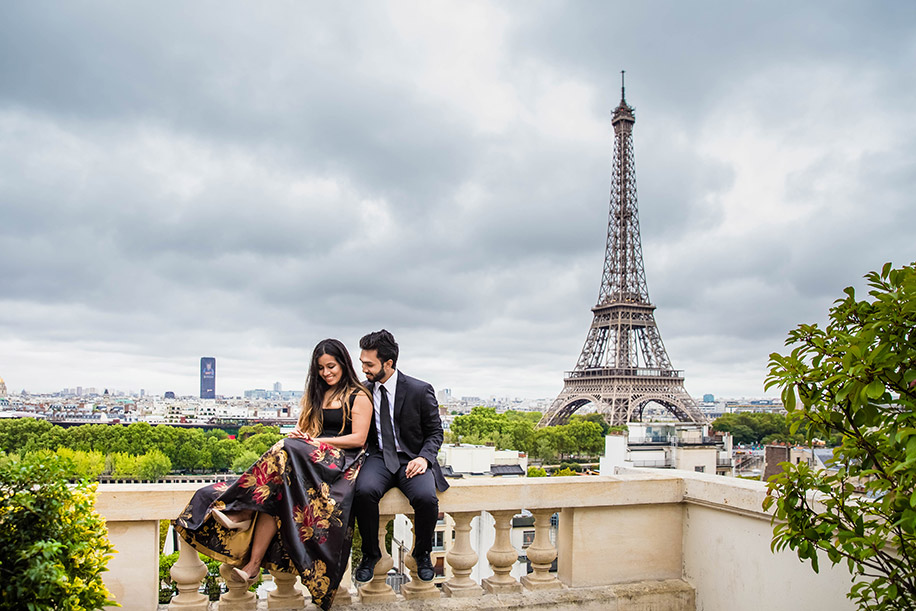 After he was done, he excused himself and left us to gaze at the beautiful sight from the terrace. Within a few minutes, the love of my life decided to take our five-year long relationship to the next level by going down on one knee at one of the most romantic cities on the planet, in front of the most iconic monuments in the world, and asked me to be his wife! Turns out, he had spoken to the management of Shangri-La Hotel Paris and booked their entire rooftop champagne bar which offers one of the best views of the Eiffel Tower. The ‘hotel photographer’ was actually a local photographer hired by him to capture this beautiful moment and I will cherish the memory for the rest of my life!

If you’d like to feature your stunning pre or post-wedding photos, share them with us at editor@weddingsutra.com

This entry was posted on Tuesday, October 17th, 2017 at 12:58:56 pm and is filed under Wedding Proposals. You can follow any responses to this entry through the RSS 2.0 feed. Both comments and pings are currently closed.