“If music be the food of love, play on,” William Shakespeare wrote and Rhea and Dishant would agree. As the couple spent a day doing what they love most – having a long, lazy lunch date at their restaurant, The Daily Bar and Kitchen in Mumbai, they told WeddingSutra how they met while Team Frames N Films captured their romance.

Dishant is the co-founder of The Daily Bar and Kitchen. Rhea runs her own designer label. They met between flashing strobe lights and bone-vibrating sound systems in a Mumbai club where it’s actually really hard to see a thing clearly. Dishant says, “My brother is a DJ and he asked me if I could join him at his gig. It was more of a music festival with over 1500 people attending that night.” One of those 1500 people was a young woman called Rhea. And serendipity struck. Dishant says, “I was standing out with a friend when she stepped out and her eyes met mine. When she looked at me out of all the people there, I assumed she was interested in me. But she actually wasn’t. Still, I couldn’t take my eyes off of her.” When Dishant realized one of the guys from her group was a friend, he chatted with him and at the end of the night they all took a picture together. Then he swung into action, “Fast forward five days later when I added her on Facebook and broke the ice by asking for that picture.”

“When I first met her, I still remember, there was something about her that gave me butterflies in my stomach and made me want to get to know her better. We’re both musically inclined and as part of the restaurant industry, music has been my niche. Once we started talking on Facebook, I invited her to one of the music events I was doing. She agreed but was coming alone so I told a couple of my friends to accompany her as I was busy working at the restaurant that night. Little did I know that a few minutes into meeting Rhea, my friends had started hitting on her! It made me uncomfortable and I had to confess to my friends my feelings for her and eventually I sort of told her that night itself as well. We started dating eventually and even lived together for a year.”

As their bond became stronger, everyone around them could see that they were meant for each other. While romance is made of amorous words and gestures, real love comes from deep understanding, mutual respect and a set of resonant values and ideas. Dishant firmly believes that the love he and Rhea share is truly one-of-a-kind. “I felt an instant connection with her that night and it was inevitable. This made me realize that I finally found my way to the magical labyrinth that would start an entirely new journey for me to happily complete. That said, looking into her eyes sparked more exciting energy within me, as it confirmed the fact that my thoughts were indeed coming to fruition. It has been many years now since that romantic revelation. We have travelled together, supported each other through thick and thin and soon, we will be tying the knot!”

It’s a series of instances that has Dishant firmly believe that platinum represents their love. Dishant explains, “Words can’t express my feelings for her. The magical feeling of having her look at me to the deep connection we share on the back of our resonant values & ideals makes what we share truly one of a kind! How do you mark something you so strongly feel about? Except with something that connotes the best, most precious, rarest – Platinum Love Bands. As strong and unique as our bond, Platinum, I believe is the best way of expressing my feelings; and today, I am elated to share this unique token of togetherness with her!” 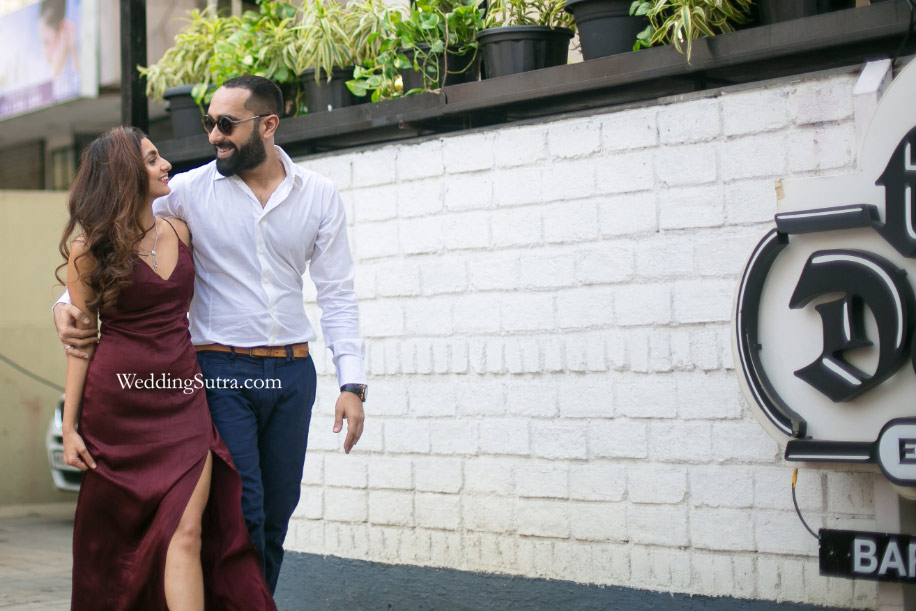 Dishant – “Allow me take you for a lunch date to our home away from home!” 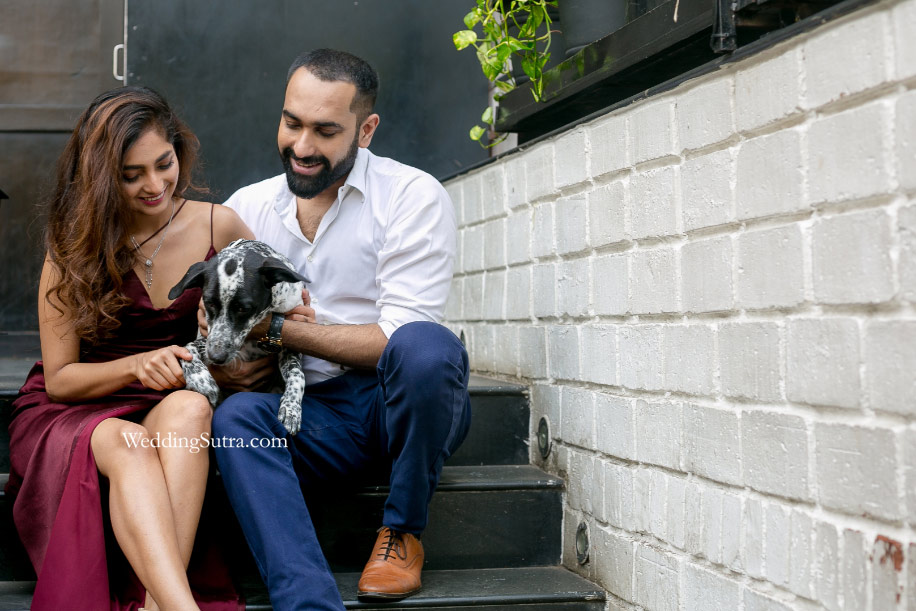 Rhea – “Our little furball is crashing our party? Perfect!” Dishant – “Afternoons are for lazing and gazing into each other’s eyes.” 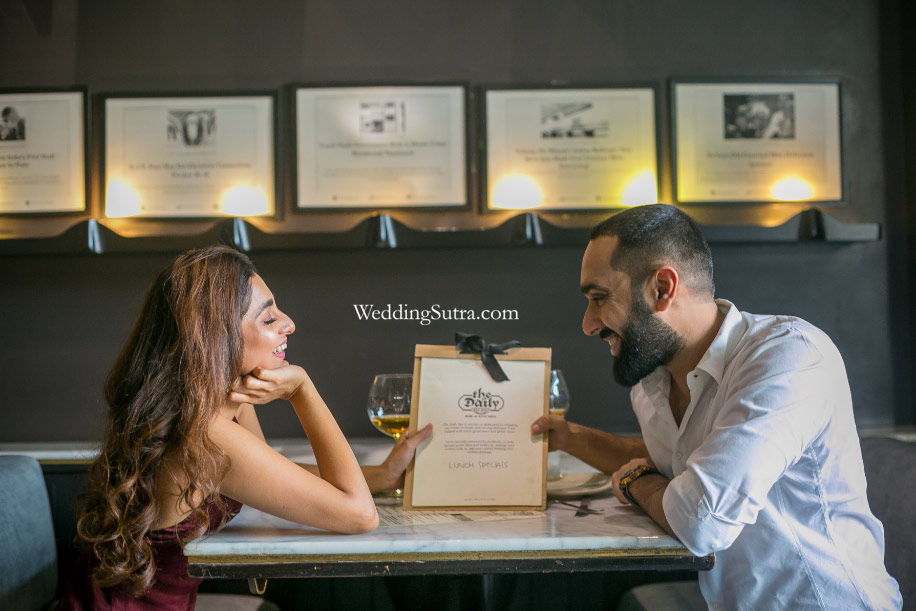 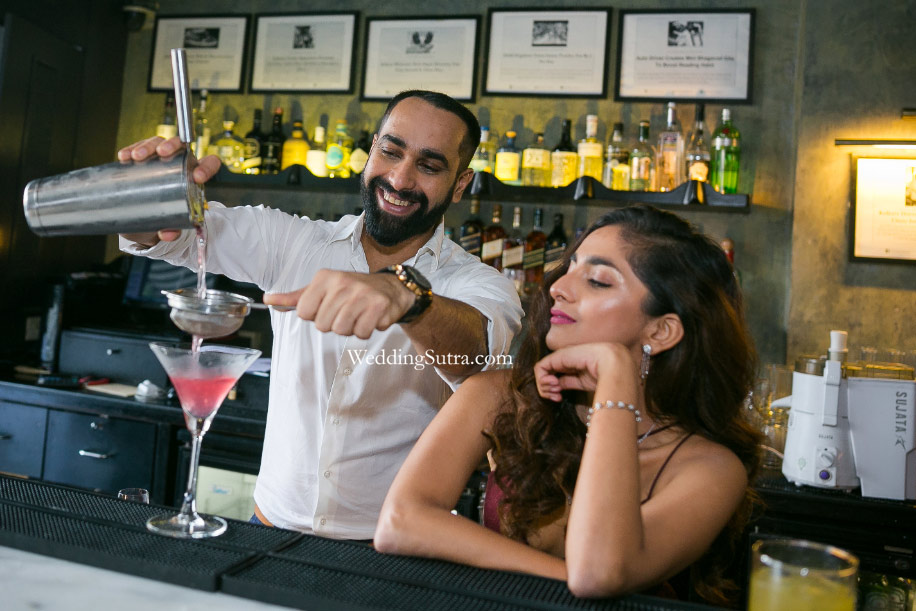 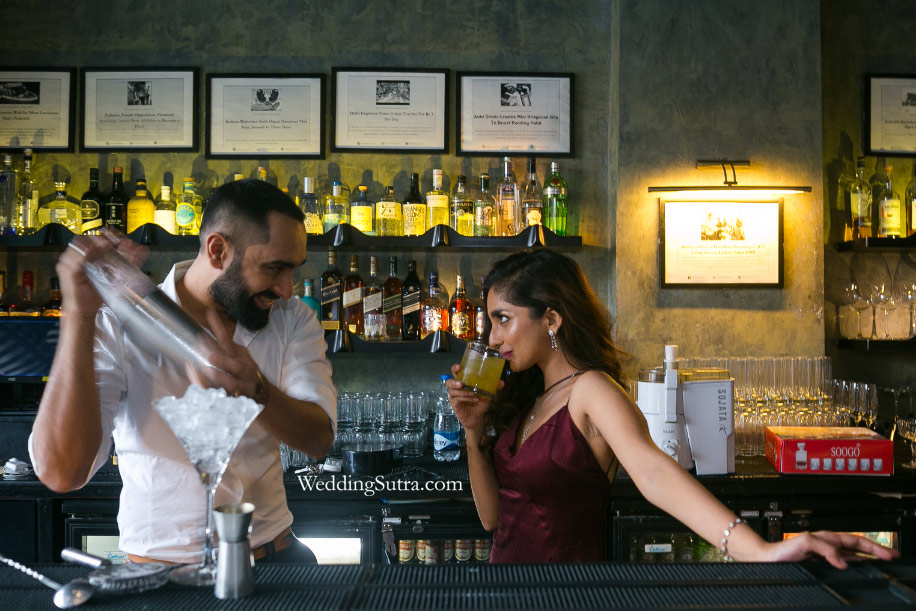 Dishant takes her to the bar, “An alchemy of spirits and a metaphor for love, milady?” Dishant surprises her with some cocktails to stir up the romance! 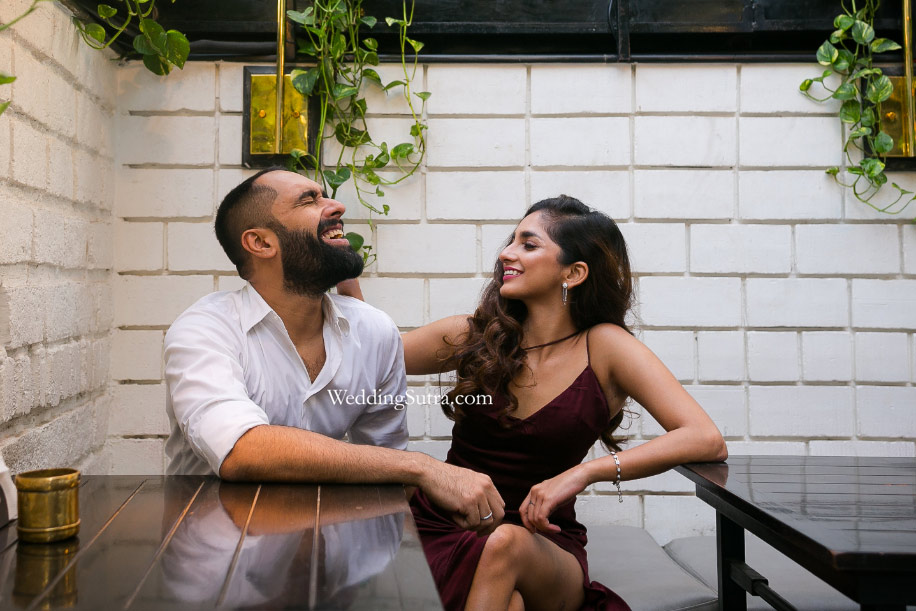 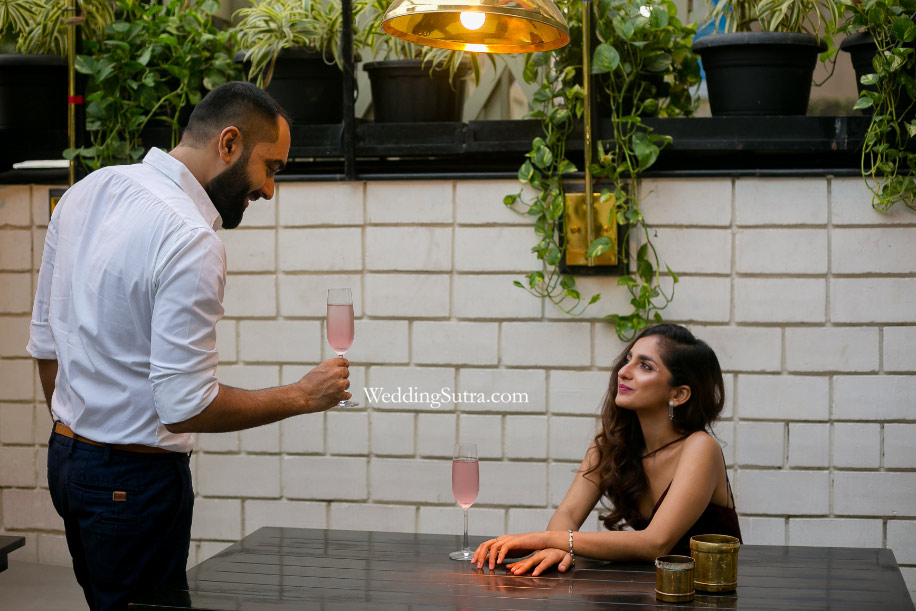 Dishant admits, “Shaken and stirred is how I felt when I first set eyes on you.” 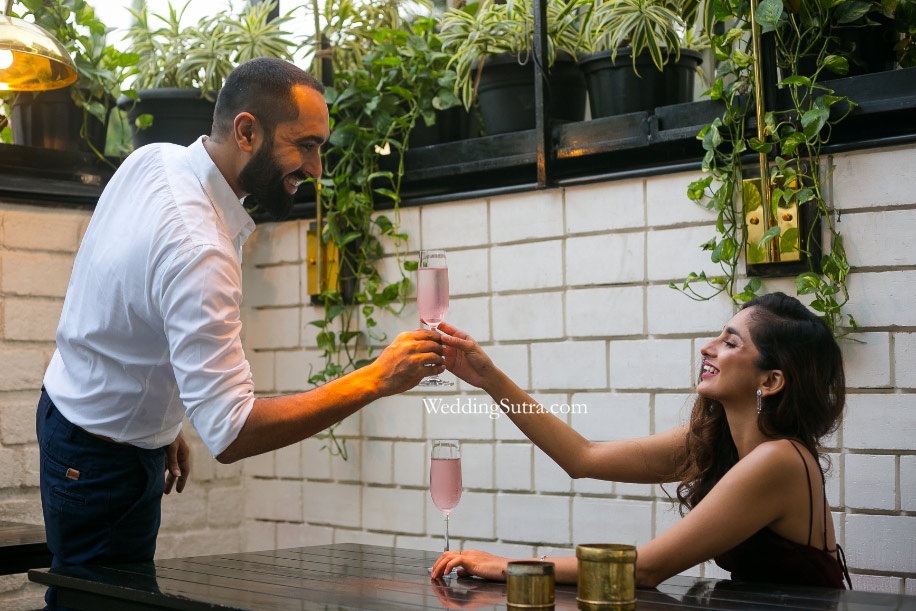 But what is that sparkling at the bottom of the flute? 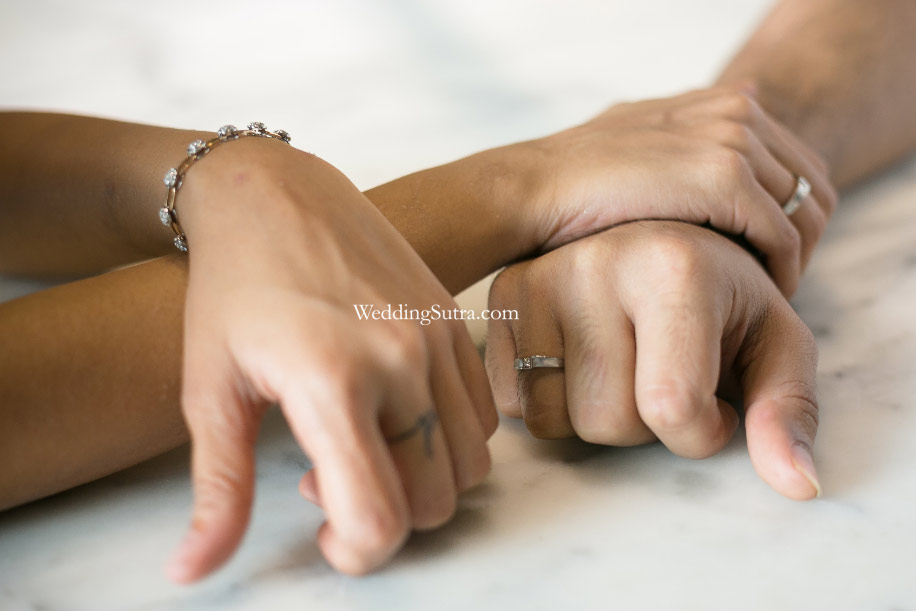 A pair of platinum love bands – one for each lovebird. And of course, whether it is life or lunch or moments of love, we’re including our fur baby too! 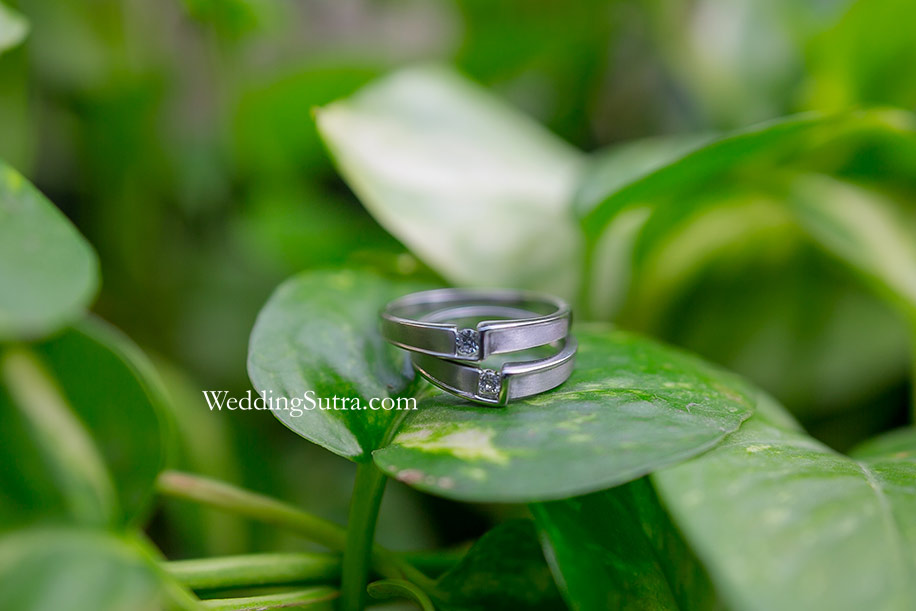 A foundation of everlasting romance sealed with Platinum Love Bands. 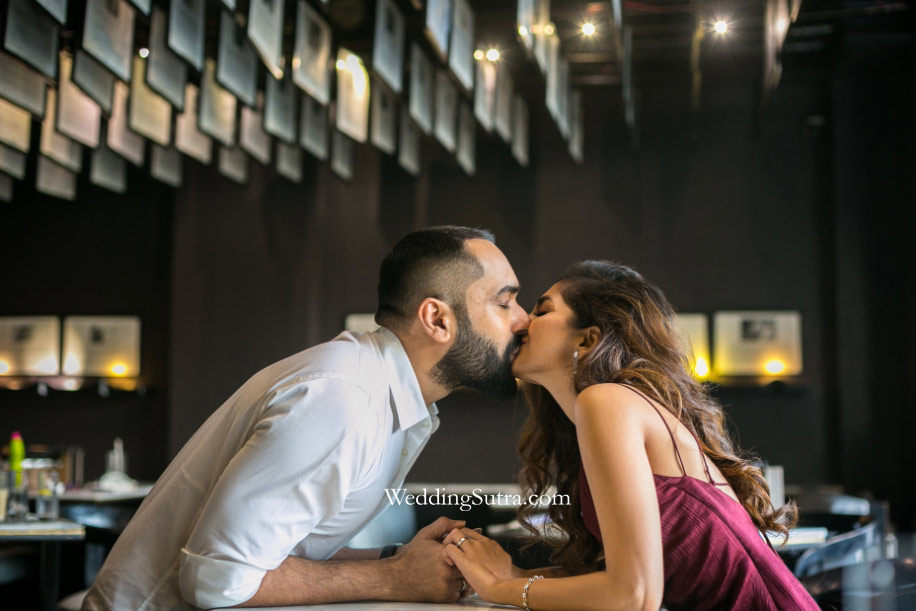 And a promise to love each other forever sealed with a kiss.

As the couple lived their Platinum Day of Love, makeup artist Mausam Gandhi flawlessly used her brushes to keep them camera ready through the day. Capturing their candid moments from behind the lens, Frames N Films highlighted the unique bond shared by the two. And lastly, to tie the shoot together, ORRA Jewellery brought some of their stunning pieces crafted in platinum.

This entry was posted on Thursday, December 13th, 2018 at 4:00:52 pm and is filed under Love Actually, Pre Wedding Photoshoots. You can follow any responses to this entry through the RSS 2.0 feed. Both comments and pings are currently closed.