Honoring their shared love for football, this groom popped the question on the Jumbotron

Nothing says soulmate like finding the perfect partner to share your cheers at every game of your favorite team! Bonding over their shared fandom of Ohio State Football, Janaki and Raag found their game-buddy for life in each other, and Raag’s unique proposal to Janaki was a celebration of that love. Here are a few glimpses of their special story. 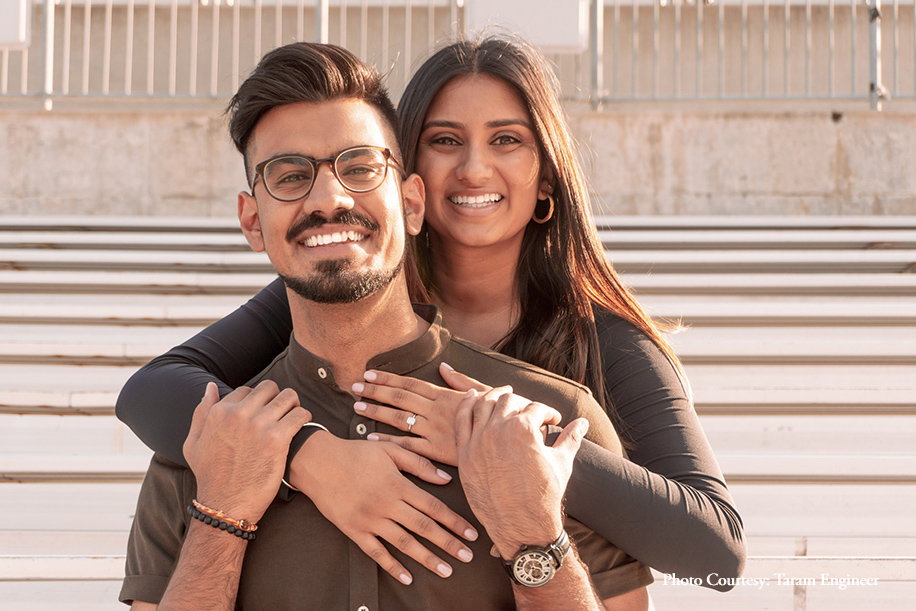 How they met
Janaki and Raag met 6 years ago at Ohio State University through some mutual friends. Soon after, they met again at a trip to an amusement park, and the two spent the whole day bonding. It was after they met at a Mandir event that they started texting, and there was no looking back. As they got to know each other more, they discovered their shared passion for football, and attended every single game of the season that Ohio State played in. It became their annual tradition, one they hope to continue for the rest of their lives. 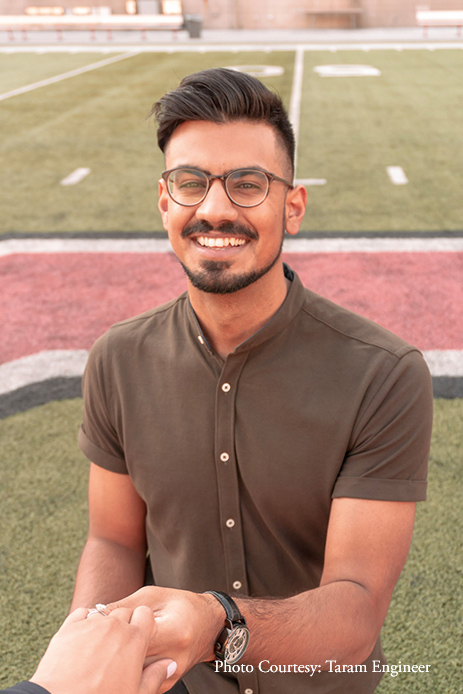 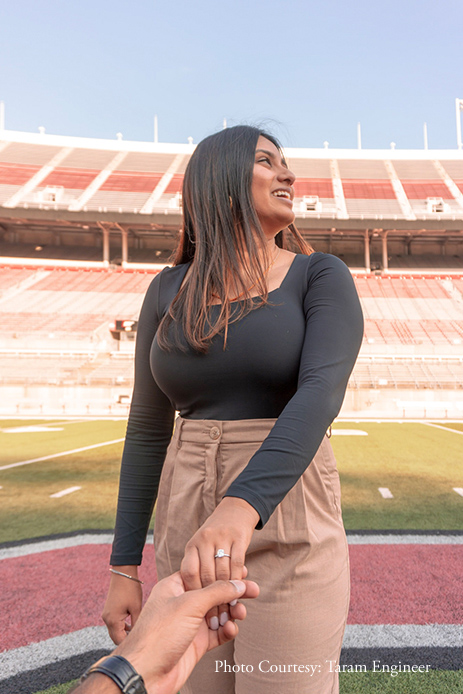 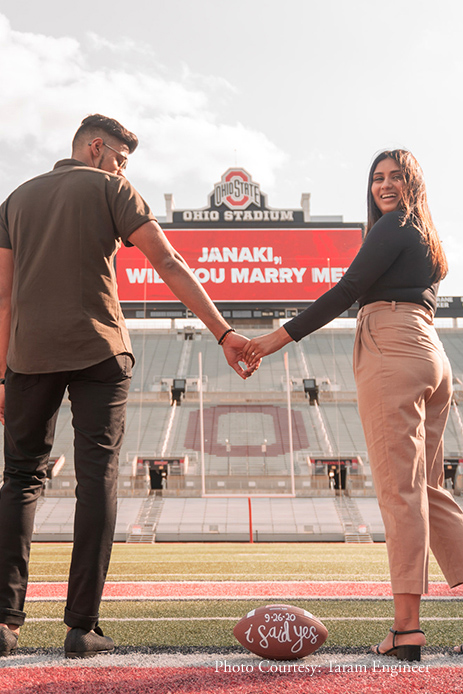 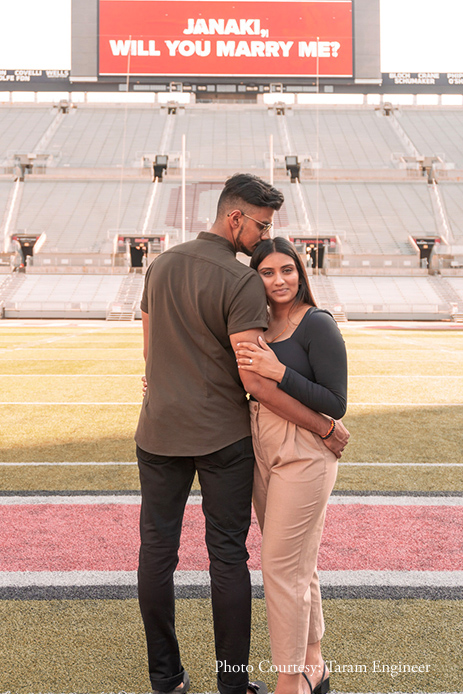 The Proposal
The bride shares, “To maintain the secret, while still keen to know my choices, Raag cleverly told me two weeks before that one of our best friends was popping the question to his girlfriend, who’s my best friend. I was super excited and launched into planning mode, with no idea that I was helping plan my own proposal. Even the rest of our group was in on the surprise, carrying on the charade on our WhatsApp groups. The day came and we headed to the Ohio State Stadium. Our friend, who was supposedly proposing, had asked all the friends to enter through different gates. As we entered through tunnel one, we were guided by a staff member about where to hide. Raag however cut through the field and stopping at the 50 yard line, got down on one knee and pointed at the jumbotron, which flashed “Janaki, will you marry me?” I was blown away and shouted yes with happiness. I knew by then all my friends would be hiding nearby, and shouted for them to come out. Due to COVID restrictions, only 10 people were allowed onto the field. After we took pictures, as we walked out of the stadium I saw all my friends and family standing outside screaming! It was truly the proposal of a lifetime. 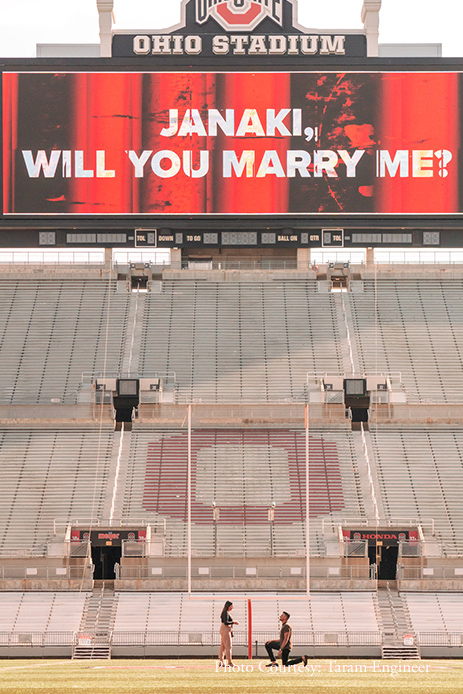 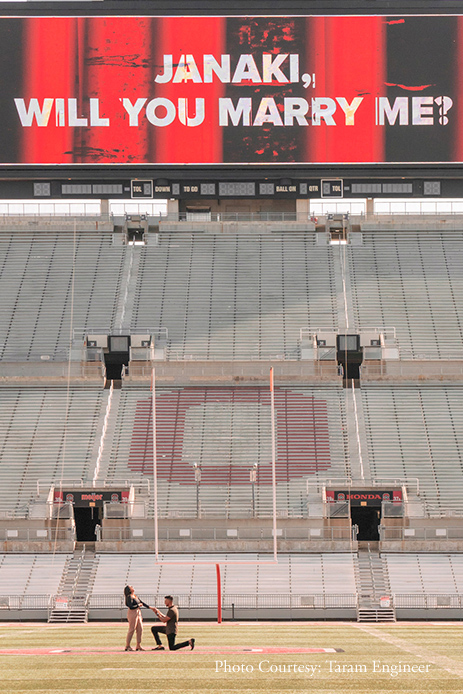 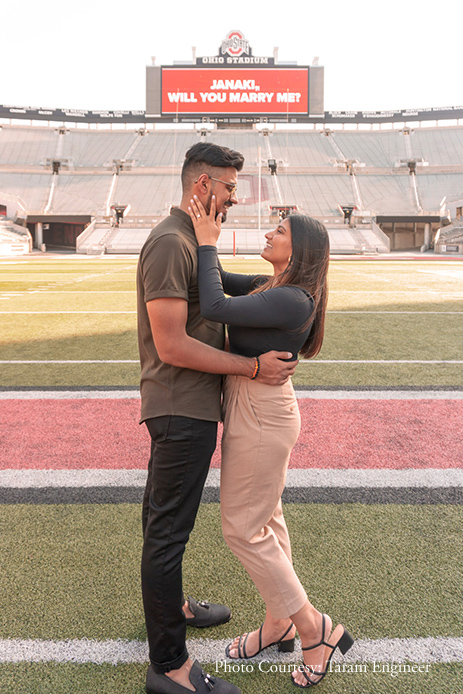 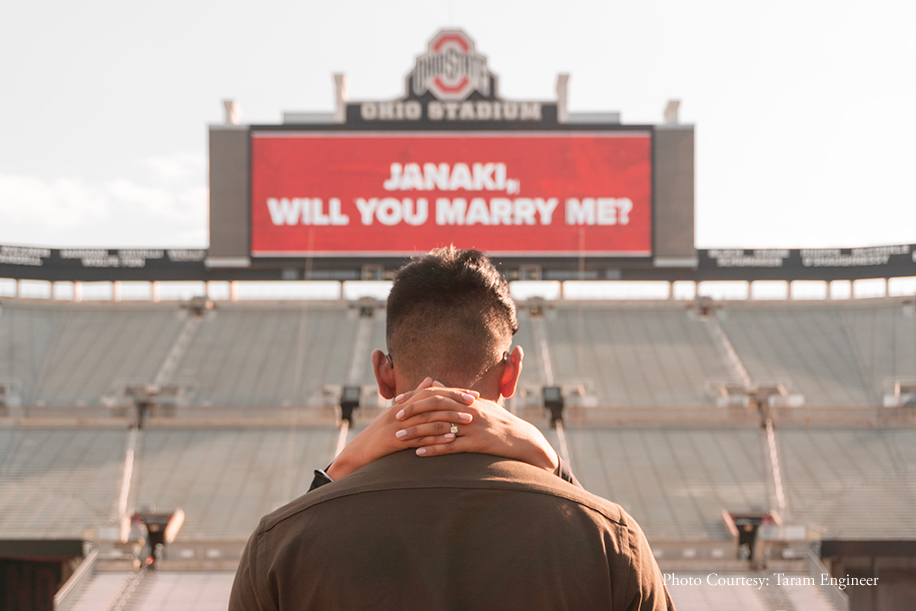 The stadium which has been such a special part of our relationship became even more special, and we will keep this tradition of coming here to watch the game year after year.”

This entry was posted on Tuesday, October 27th, 2020 at 4:47:39 pm and is filed under Wedding Proposals. You can follow any responses to this entry through the RSS 2.0 feed. Both comments and pings are currently closed.