“The women members of Leena Mogre’s Gym are always talking about Timmy Narang, his glowing skin and his hot bod”, says a friend who is a Pali Hill resident and works out at Leena Mogre’s. She adds: “Little wonder Timmy has a complimentary membership to the gym since it started— women turn up at the gym just to see him, and fortunately for him, it’s where he met Esha Koppikar too.” Timmy’s friends say he is obsessed about his skin, diet and exercise routine and he takes his gym schedule more seriously than anything else.

At his pre-wedding functions, the 40 plus groom glowed in his unconventional grooms wear. Our verdict—Timmy can carry off anything, but if most other grooms had worn the same creations—they would look funny. At the pre-wedding ‘Barbie and Ken@ The Disco’ theme bash hosted by sister Ramona, Timmy wore plaid pants and a pink satin belt and tie. Esha looked pretty in a white gown designed by Ashley Rebello. For the engagement Timmy wore a rich pink sherwani with heavy zardozi, teamed with a white churidar.  Esha wore a radiant pink ensemble by Anita Dongre.

For a change, we’re looking forward to see the wear of not just the bride, but the groom too. Tomorrow is Timmy’s wedding and we’re sure he’ll chose something grand yet unconventional—and he’ll look good too—for he’s one of the lucky few who looks good no matter what he wears. 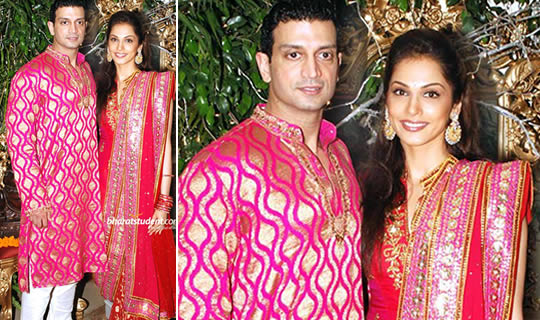 This entry was posted on Friday, November 27th, 2009 at 11:21:16 am and is filed under Celebrity News. You can follow any responses to this entry through the RSS 2.0 feed. You can leave a response, or trackback from your own site.