How the Ambanis & their Wedding Planners Orchestrated the Biggest Wedding Ever

Akash Ambani and Shloka Mehta’s wedding looks so elegant and effortless on social media. Yet, the amount of planning required to host such a grand affair with thousands of guests can only be imagined. We reveal the little details that went into making the event such a smoothly organized success.

Let’s start with the choice of venue – Jio World Centre. This new magnificent landmark at Bandra Kurla Complex (BKC) in Mumbai boasts of super-impressive facilities that include the world’s largest elevators, basketball and football fields, and a spacious, fully-equipped gym. 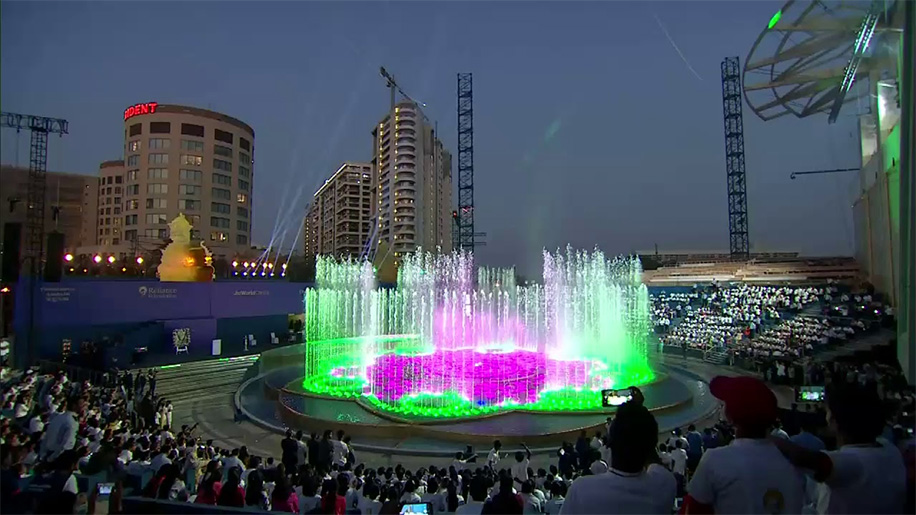 The Ambani-Mehta nuptials were not only one of the grandest weddings witnessed in Mumbai for a long time, but also a momentous occasion for all of the couple’s families, large circle of friends, industry networks as well as senior employees of Reliance Industries and Rosy Blue Diamonds – all of whom were among the first ones to step into this all-new territory.

While the guest lists for the functions on March 9 and 10 were relatively smaller and restricted to Bollywood celebrities, corporate heads and politicians, the reception that was hosted at this landmark venue on March 11 saw a much larger gathering.

The venues that have played host to the biggest and grandest conferences and weddings in Mumbai include- The Royal Western India Turf Club, The National Sports Club of India in Worli (NSCI) and National Center of Performing Arts (NCPA) in South Mumbai, MMRDA grounds in BKC, Bombay Exhibition Grounds in Goregoan, and the lake-facing Renaissance Mumbai Convention Centre Hotel in Powai. However, the inauguration of the Jio World Centre shone brighter than any of the events that India’s financial capital has witnessed so far.

Guests who stepped into this space through Gates 1, 2 and 3 at 7.00 pm were greeted by international security guards with pleasant demeanors. The gates to the main hall and the dinner hall were not open till around 8:30 pm. While waiting, all the guests enjoyed fabulous street food and European fare curated by one of Ambani’s favorite caterers – FoodLink.

What was interesting was to see the core wedding team – comprising some of India’s most experienced event and wedding planners, backstage operations managers, hospitality experts and members of the Ambani family – orchestrating this mega affair. 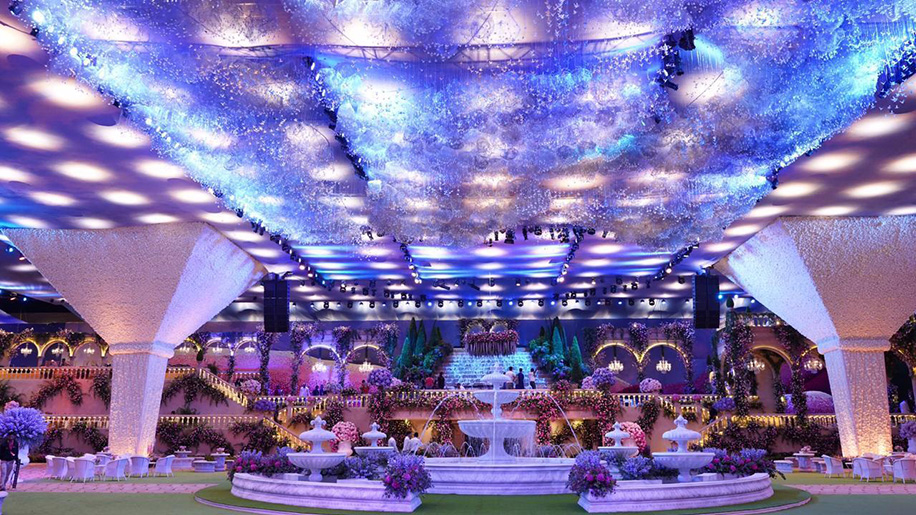 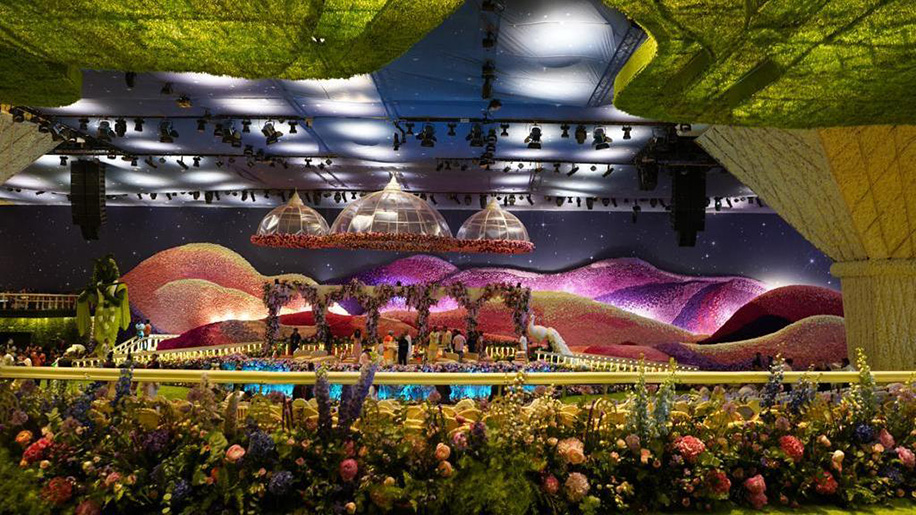 The multiple teams on board for the Akash Ambani-Shloka Mehta nuptials worked closely with Nita Ambani over three months, just after the equally lavish wedding celebrations of her daughter Isha Ambani to Anand Piramal concluded.

a) The guests received beautiful cards designed by Uttara Shah (bride’s side) and EDC (groom’s side) that contained directions to the venue, a clear indication about the entry and exit gates as well as bands that had to be tied on wrists. This made the process of security checks and entries a lot smoother.

b) The building was decorated with exquisite floral arrangements and the roads leading to entrance gates were lit up by fairy lights so that it was easy for guests to locate the sparkling new address even from a distance. In addition to this, all paths around BKC had signages with logos designed for Shloka and Akash’s wedding that directed the invitees to the venue without any confusion.

d) Around the same time (8.30 pm), guests were also allowed to enter the main hall where the Ambani and Mehta families, and the couple, were present on the stage. Serpentine queues to meet the family didn’t cause any stress to the guests due to the polite hospitality staff who ensured that everybody stood in line while being treated to food and beverages that waiters served as people waited.

e) Most guests had to wait for 20-40 minutes before they reached the stage, and as they proceeded, they were politely requested not to take photos to avoid delays. The team responsible for Shadowing the Ambani family and Stage Management (On Cue Productions) along with the Mehta family’s trusted Wedding Planners– Seven Steps were very prompt and alert as they managed the flow of people, ensuring that the wait was not too long.

f) The buffet spread was lavish with three options – Kashmiri, traditional Gujarati, and world cuisine. The sumptuous fare also meant that there were no more than six or seven corners where plates could be picked up from. Keeping this in mind, arrangements were made for another round for entertainment that included a musical fountain show and a performance by singing sensation Arijit Singh. This helped manage the crowds efficiently and ensured that there was not too much rush between 8:30-9:30 pm

g) With so many senior citizens unable to stand in queues, the principal caterers FoodLink had their teams step in whenever required to help them with water and refills. Besides managing the large buffet space, FoodLink also managed the VIP lounges, where over 500 guests were heard to have savored the same cuisines, alongwith thin-crust sliced Pizzas prepared by a chef from Milan, a range of Japanese vegetarian specialities and freshly prepared Bengali sweets by experts from Kolkata.

h) It was a hectic evening as many guests had to move around the different corners of the expansive Jio World Centre. However, many of them marvelled at the way the Ambanis, Mehtas and the newlyweds stayed energized as they greeted the guests with a smile and a pleasant handshake or a traditional namaste. This, especially after so many days of ceremonies, functions and parties.

i) As guests were already informed in the invite, the Exit Gate was number 6, and it would take atleast 10-15 minutes for their drivers to reach the spot. As they waited for their cars and cabs to arrive, guests were invited to pick their favorite candies or relish an array of ‘paan’ (flavored betel leaves) and mukhwas (traditional mouth fresheners) which always make for a delightfully sweet ending. 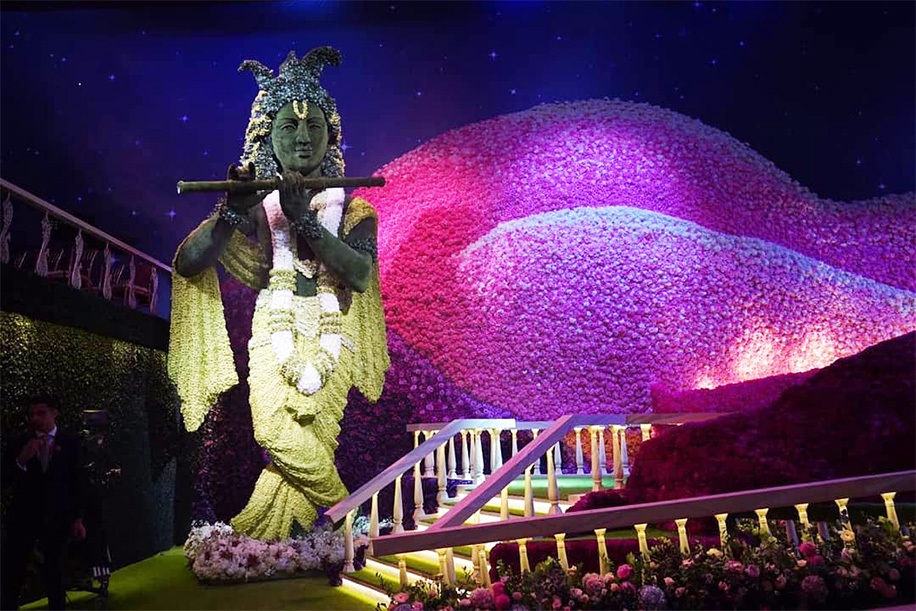 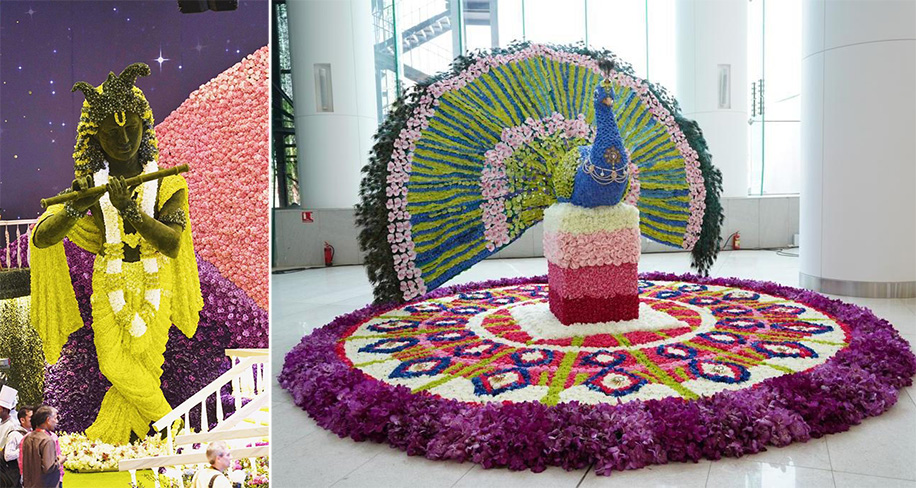 This entry was posted on Tuesday, March 12th, 2019 at 5:21:33 pm and is filed under Wedding Planning. You can follow any responses to this entry through the RSS 2.0 feed. Both comments and pings are currently closed.