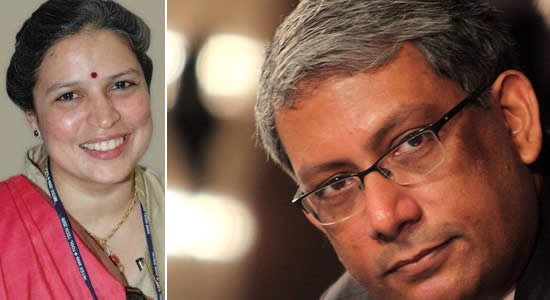 Microsoft’s India head Ravi Venkatesan is marrying Sonali Kulkarni– not actress Sonali Kulkarni. His bride is the President & CEO of Japanese firm Fanuc India Private Limited. It is the first marriage for both the corporate achievers aged 47 and 45 and the simple wedding is at the Trishna Club, near Ulsoor Lake in Bangalore.

According to newspaper reports, over ten years ago Venkatesan a Tamil Brahmin from Pune fell in love with Sonali, who is Mahatma Gandhi’s great grand-daughter. But his family did not permit the marriage, since the bride was not from the same community. So they waited for a decade—and now the D-day is on October 11. Sonali is the daughter of Sumithra Kulkarni, daughter of Ramdas Gandhi. Sumithra, an ex-IAS officer and a former Rajya Sabha MP and her husband G R Kulkarni, the former Dean of IIM Ahmedabad live in Bannerghatta Road, Bangalore.

The who’s who from the world of business, corporate India and politics are expected to attend the evening wedding. The venue Trishna Club (earlier known as Madras Sappers Club) is a majestic place, where a wedding event is being held for the first time—the club comes under the jurisdiction of the Army authorities and they do not usually give the club for events by non-Army personnel. Obviously a special exception has made been for the very special couple! We would love to see their wedding pictures but our guess is that the couple will choose to keep it a very private affair.

This entry was posted on Friday, October 8th, 2010 at 12:38:48 pm and is filed under Celebrity News. You can follow any responses to this entry through the RSS 2.0 feed. Both comments and pings are currently closed.