Mumbai Model Nicole D’Silva married Boston based Pervez Taufiq at a beautiful celebration on 11-11-11 at the picture-perfect Hyatt Key West Resort and Spa in Florida. Pervez Taufiq is the lead singer for Living Syndication, and is also working on a solo album. Nicole’s modelling career began after she participated in the Miss India Pageant 2007.

Taufiq has been visiting India regularly, since he is also the voice for Sony Pix channel in India. He met Nicole two years ago, at Blue Frog whilst out with his friends. They struck up a conversation there, but as they parted ways and went to different after-parties, they ended up at the same places 3 times that evening! The couple have set up their new home in Boston and early next year, they will be in India to host their Mehndi and Wedding Reception in Karjat. 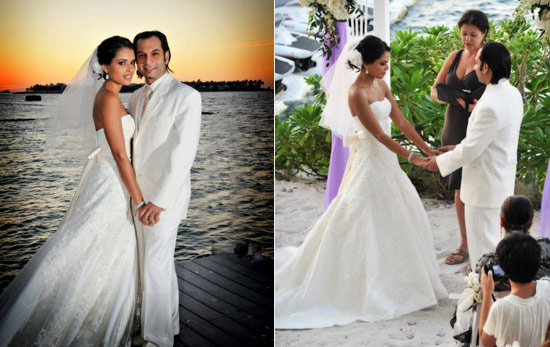 This entry was posted on Friday, November 25th, 2011 at 1:00:25 am and is filed under Celebrity News. You can follow any responses to this entry through the RSS 2.0 feed. Both comments and pings are currently closed.