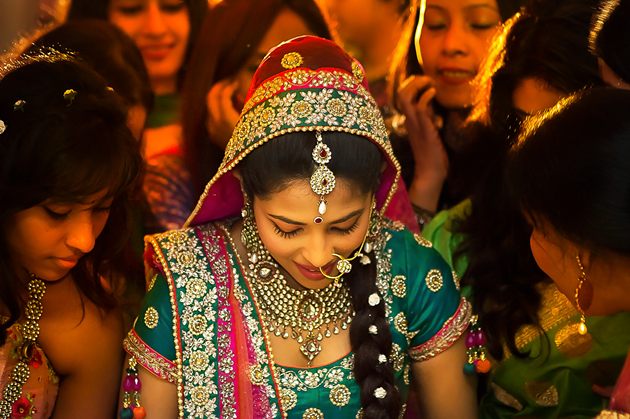 Interestingly, this is one of the first weddings I shot. In 2009 when wedding photography that typically happened was the traditional posed style of imagery. Back then, I had been toying with the idea of shooting weddings just for fun and as a photographer, I was enthused to be able to bring in some story-telling into wedding journalism.

So there I was, armed with what I would now term a very basic DSLR, with no idea what I was doing and how I should be doing it– but determined to create stories from what I saw. I took this image just as Pooja stepped out from where she had been waiting for the baraatto settle down– and was gingerly taking her first steps towards the mandap.  I rushed to be in front of her, and suddenly there was a hush in the gathering and she demurely looked down knowing that every single eye was on her!

This will always be one of my favorite images– everything just came together here. Her friends and family surround her, the strong backlighting by a frantic video-man holding the dreaded halogen lamp rushing in to get his shot, the bride demurely looking at the ground as she made her way forward– this is why the bride’s entry will always remain one of my favorite parts of a wedding. 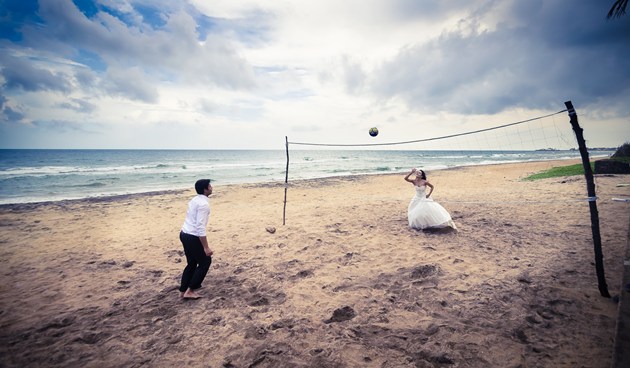 Creating a visual or conceptual imbalance in a frame gets me going – and it’s something I’m always looking for.

This shot just like all the good ones happened by chance. After the Church wedding, we had just wrapped up a post-wedding session at Mahabalipuram beach near Chennai when it started looking like it was going to pour. Just as we were walking towards shelter, we came across this unused beach volleyball court and in the spur of the moment we challenged the bride and groom to a game. I have to say I was lucky– they were totally game (pun intended!) and were so caught up in their match, they forgot I was taking pictures of them! Who won? That’s a secret! 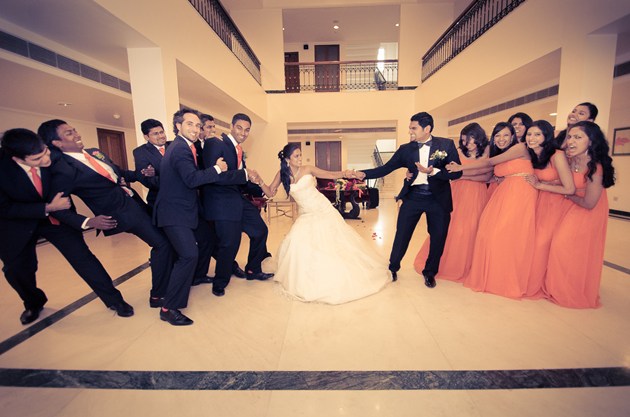 Nothing makes me more excited than creating photos that are fun! In this shot, we had just completed a series of formal shots of the couple with the bridesmaids and groomsmen. We had a couple of minutes to spare, and I knew something was missing. All of them were great friends, and were having a good timeand I knew I had to challenge them to a good old-fashionedtug’o war! I’ve always been lucky to work with some really great couples and their friends– and they loved the idea! The match soon became serious with each side giving it all they got. Who won? Well– with six burly groomsmen behind her…the groom’s side didn’t stand a chance! 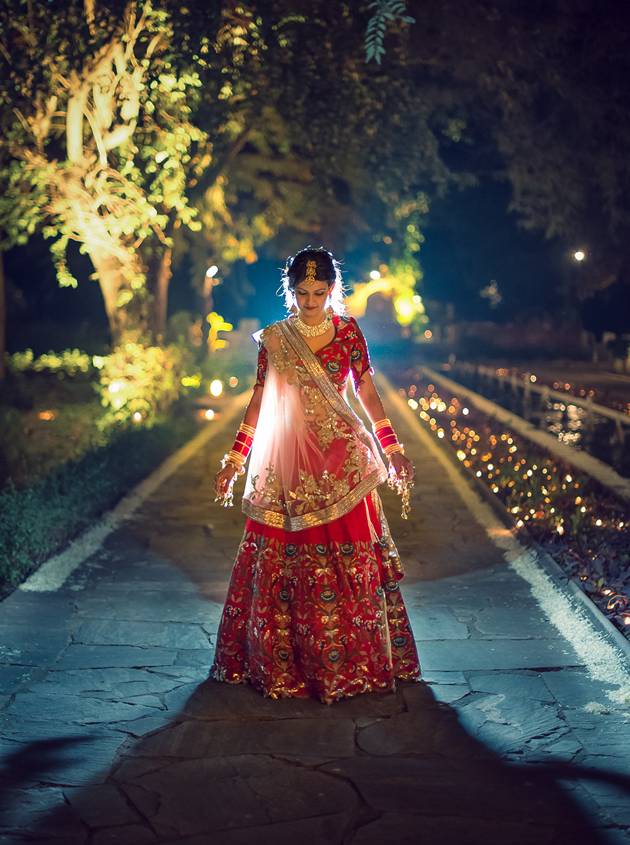 There are times when things come together, and there are times when things really come together! We were shooting a wedding at the Samode Palace in Rajasthan and the evening was coming to an end. I had made a mental note earlier in the day that I wanted a full-length portrait of the bride but to my frustration, I hadn’t been able to find that perfect moment. So there we were, taking a quiet break when the bride Meha walked right past us by on her back way from the green room which happened to be a little away from where the main festivities were happening. I grabbed whatever equipment I had and requested her to stop for a minute– we had a few seconds to choose the spot and setup and get a picture of her while she was walking back. I knew we couldn’t request her to wait for long and Iwas only able to get a few pictures squeezed in of which this is one of them. 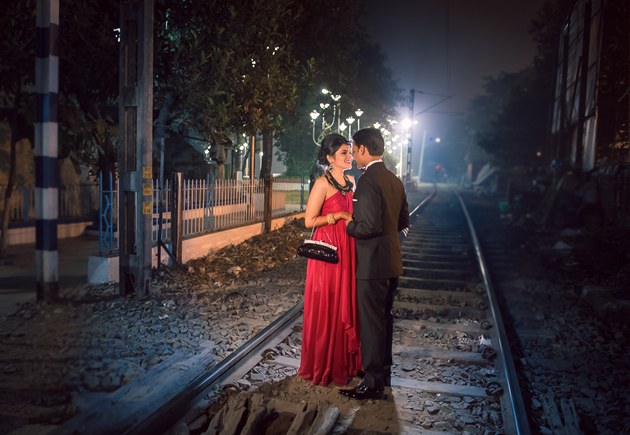 It’s strange how so many of the great images over the years are all ones that happened by a stroke of luck and last minute inspiration. This one is no exception!

While shooting a wedding in Kolkata, one of the functions involved a party on a barge. This sounded like lots of fun, and we arrived early so that we could setup and have a look at the place. After we were all setup, the guests started trickling in, and everyone was waiting for the bride and groom to show up. I received word that the bride and groom would be reaching soon, so I rushed off the barge and reached the jetty.And then…inspiration struck! In the back of my head I remembered that in order to reach the jetty, we all needed to cross this old railway track that adjoined the Police Jetty in Kolkata. I leapt forward and waylaid the couple before they could get too far– and reeled off a few quick shots where they stood. I knew I had the perfect composition – the railway track with the couple on it was just the kind of disruptive beauty I liked in a frame, and I knew I had a picture I would be proud of! 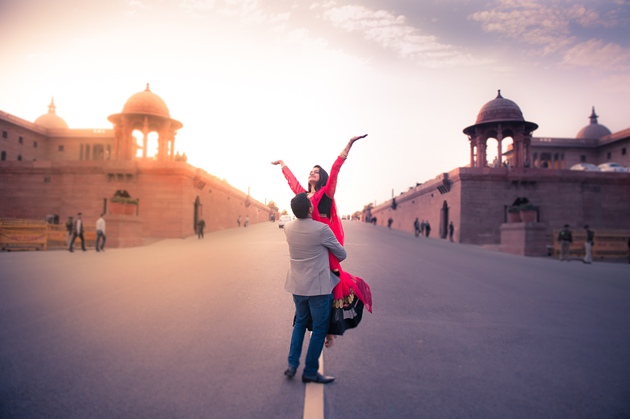 I’ll have to admit, I had the Pharrel Williams song ‘Happy’ stuck in my head the day I shot this.  The couple was adorably in love and the chemistry they shared could literally be poured into a jar and bottled. This picture was shot in New Delhi,near the Rashtrapathi Bhawan (you can see the entry to the north and south blocks just behind the couple). We were walking around the area taking pictures without too much pre-planning, when it struck me that I’d like to create something iconic (hard to think that way what with that magnificent building in the background). I explained the setup to the couple, and walked out to where I wanted the shot taken. With traffic, pedestrians and the ever present security commandos around, I knew we had to be quick and that timing would be everything. I didn’t have much time to compose the shot, and had my assistant signal the couple to jump for joy– and managed to get a few frames in. I could see the unstoppable Delhi traffic surging towards us and we had to shoot and get out of the way…fast!

After we dusted ourselves off, I finally got a chance to look at what we had captured– and I loved it! The sheer joy in Nikita’s face coupled with the perfectly symmetrical North and South blocks in the background was just what I was aiming for!

I hope you enjoyed this collection of images and my notes on them. Here’s another article I wrote on WeddingSutra on how you can look great in your wedding pictures! Also, remember– wedding photos languishing away in a computer is a real crime; nothing beats going through your precious memories as a hardcopy in print. Encourage your photographer to include a coffee table book like the ones available from Canvera!

Arjun is an award winning wedding photographer who believes in creating beautiful, off-beat and fun wedding memories. You can find more information on what Arjun does on his website or on Facebook

This entry was posted on Friday, August 15th, 2014 at 11:41:30 am and is filed under Wedding Photography & Films. You can follow any responses to this entry through the RSS 2.0 feed. Both comments and pings are currently closed.