New Beginnings and Blessings: in Conversation with Luv and Hemali

The first time we met
Luv met Hemali at his sister’s friend’s wedding. Hemali was the bride’s friend, and Luv had seen her around over the years, but never spent time with her. They danced together at the wedding after party. Luv confesses that he has two left feet; he barely even gets on a dance floor. But that night, she had him dancing with her until the early morning hours. “She actually made me dance!” he exclaims in astonishment. Luv really liked Hemali and tried to get to know her. Within a month, he was certain that he wanted to dance with her for the rest of his life. Hemali, however, took five months to make up her mind. The first time we met each other’s parents
Luv and Hemali’s personalities and preferences are a stark contrast, and so are their family backgrounds. He comes from a gregarious Sindhi family while she hails from a conservative Jain background. They began with a clandestine dating period replete with fun incidents like ducking down in their parked car seats at Bandra Bandstand when their friends drove past, and making lame excuses to family and friends while they spent time with each other.

Within a month after Hemali agreed to commit, Luv broke the news to his parents. His father wanted a Sindhi bride for him, so he was apprehensive. But his father turned out to be more open-minded than he’d realized. He told the son to invite his girlfriend over for an informal dinner. Hemali was already having cold feet about meeting the ‘strict’ father-in-law-to-be. She had known Luv’s sister, Megha, and had met his mother before. And then, it didn’t turn out to be quite as casual as she’d expected. She ended up having a one-on-one interview with Luv’s father. “It went on for close to an hour. I was completely unprepared for the kind of questions that he asked because I’d never even thought about marriage before,” she laughs. “My sentences were half complete.” But, as Hemali quips the father had their best interests in mind, and he was helping them understand each other’s expectations.

“He asked why I thought we were perfect together,” she says, “and I said… because we haven’t fought even once in these eight months. When I am angry, he calms me down and when he loses his cool, I calm him down. We have great understanding, great chemistry.” But marriage changes everything, said the father, and he shared some insights and examples. Hemali was numb throughout, she confesses. “I didn’t want to say too much and sound foolish,” she laughs. But, all was well. Luv’s father suggested that they meet up with Hemali’s parents at the earliest.

It turned out that Luv’s parents had even bought her a precious gift, as shagun. And they had already accepted her as their daughter-in-law-to-be before they ‘officially’ met her. But Hemali had her reservations. She told Luv that if her mother did not approve of the alliance, she would not marry him. “I kept postponing the meeting,” she confesses. Over the next four months, she introduced him to her three sisters, one of whom finally told their father that the youngest sibling was in love.

Then one evening in November 2013, Luv insisted on bringing over homemade dinner to Hemali’s house and finally met Hemali’s parents, sisters and her brother-in-law, who had assured his support. “Her father was very ‘chilled out’. He said that if we were both sure about it, he was fine with the alliance,” recalls Luv, so he suggested the families meet the following evening. “I got one chance to meet them, and I took it to Gor Dhana (formalizing the promise to get married) within the hour,” he laughs.

A touching moment from the Engagement Ceremony
At their Kachchi Misri (informal engagement ceremony) in mid-December last year, a team of photographers were shooting the auspicious event. The family obviously wanted pictures with all the friends and relatives. So they had set up a room in the house where the couple posed with about fifty guests. At some point during the photo session, they just looked at each other and gasped. Luv recalls, “In that moment, we both felt as if we were standing on a marriage podium and it felt as if we were actually getting married… and it felt great!”

For Hemali, it also happened earlier during the ceremony when the couple was sitting at the havan and relatives from both sides were feeding them Gor Dhana, putting tilak on them and giving her gifts. “It was the first time that I actually felt like a bride-to-be. I realized that I was now going to be a member of this new family. It was a nice feeling and reality set it!” she states. 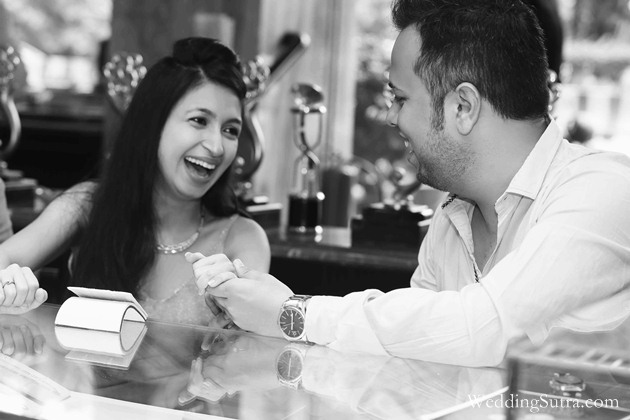 His Mother’s Blessings
“I always had one daughter, but it is a beautiful feeling to welcome a second daughter. I have been waiting for this day and it is finally here. Hemali and Luv are just meant to be. They complement each other so well. Can’t wait to have her home… more fun, more women power! I’m really excited.” 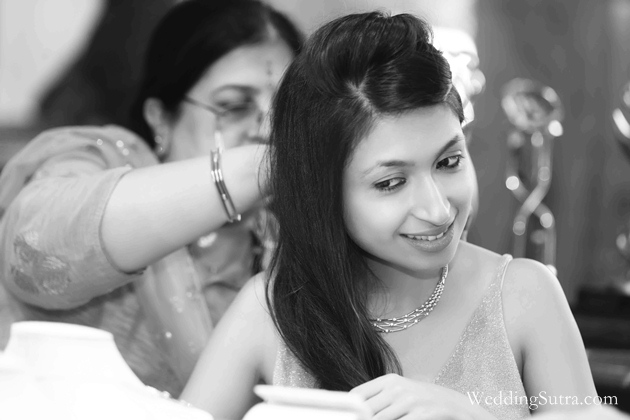 Platinum Evara- The Ties that Bind
Hemali and Luv in Platinum Evara, a blessing of everlasting love. The new range of bridal jewellery crafted to suit the tastes of the modern Bride and Groom. This entry was posted on Wednesday, June 24th, 2015 at 4:34:22 pm and is filed under Precious Platinum. You can follow any responses to this entry through the RSS 2.0 feed. Both comments and pings are currently closed.