While glimpses of the fairy chimneys, blue skies dotted with hot air balloons and otherworldly land formations immediately pin the location as Cappadocia, Turkey’s magical ‘moonscape’ – you could wonder if Nhaveya and Sagar played with time and captured four seasons in one day. 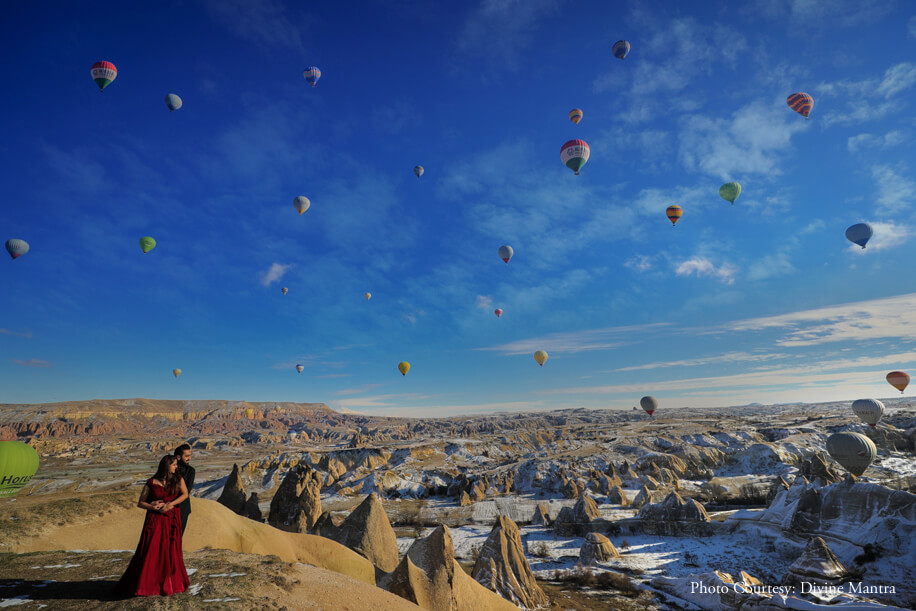 One moment the sky is a summer blue, another moment a tree is turning gold and in yet another photograph, the couple stands, embracing each other in snowfall. WeddingSutra Favorite Divine Mantra has excelled in this pre-wedding shoot that places the couple amid breathtaking landscapes, showcasing both – their burgeoning new love and the ancient, mystical magic of Cappadocia. 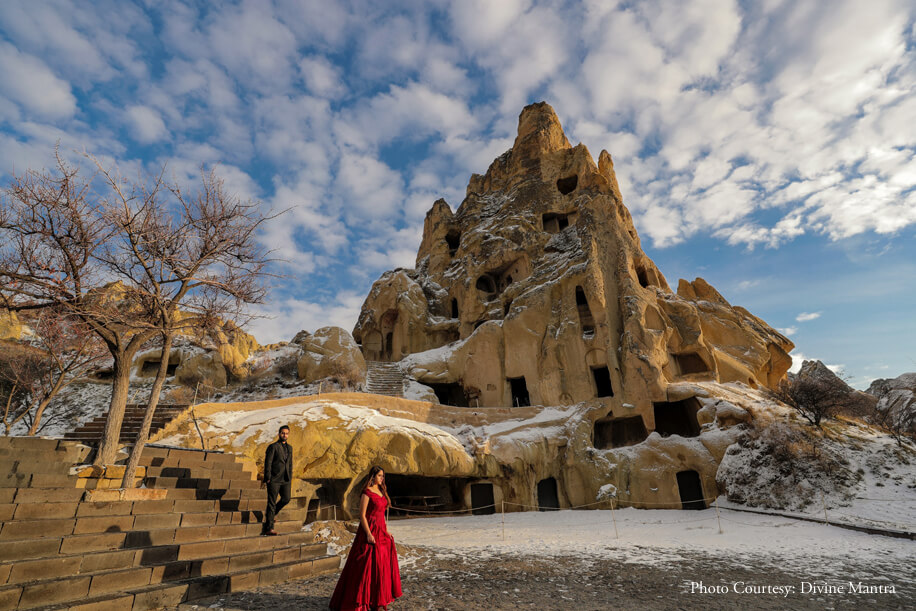 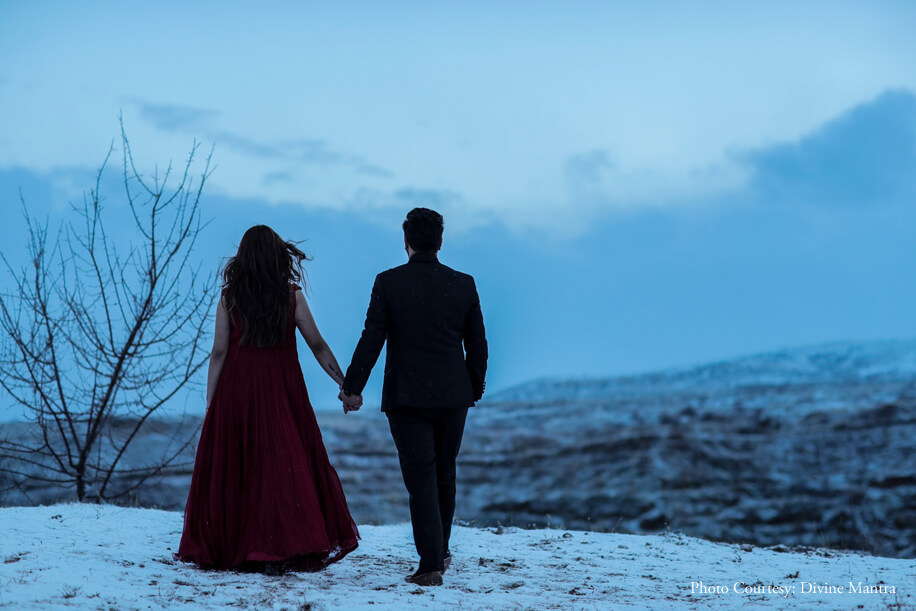 How We Met
“Our families met via a mutual relative and it all began there. I was in Chennai and Sagar is from Delhi and we began conversing on text at first. Our chats began with a few words but then would stretch out over hours. Once we began chatting, we couldn’t stop. We talked for 11 hours at a stretch! It felt like ages but it had been only a week by then and then we decided to meet in Delhi. 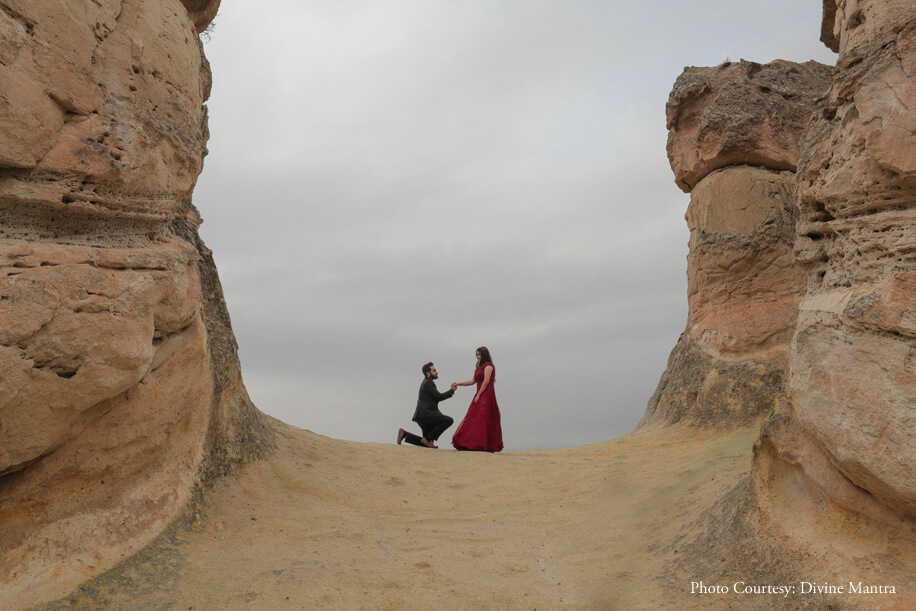 Once we saw each other there was a definite connection that felt very strong. We knew this was meant to be. Despite being an arranged marriage, it feels like we have known each other for a really long time.” 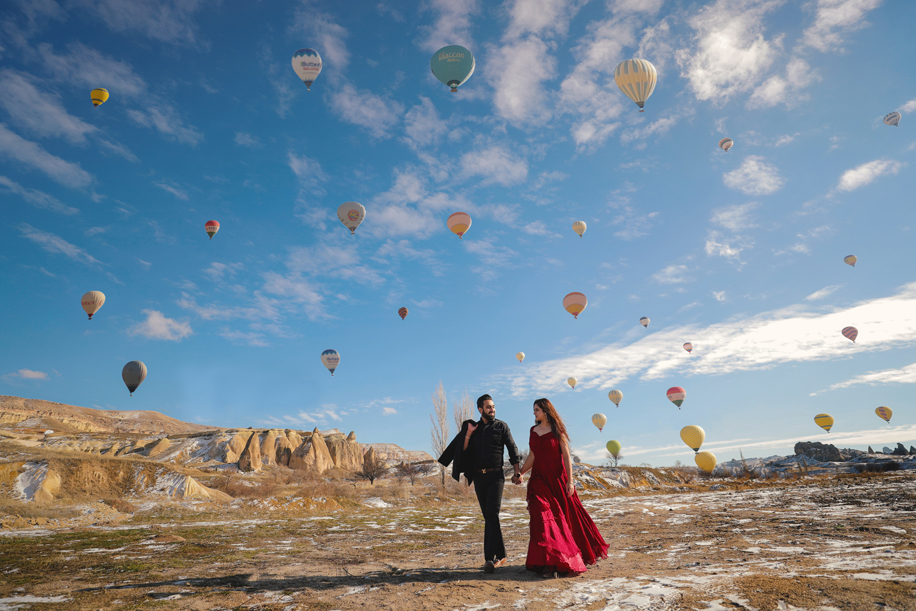 Pre-Wedding Photoshoot
“Divine Mantra suggested we have our pre-wedding shoot in Cappadocia, Turkey. The surreal landscapes, the hot air balloons in the background and the snow helped make this the perfect locale for the photo shoot. 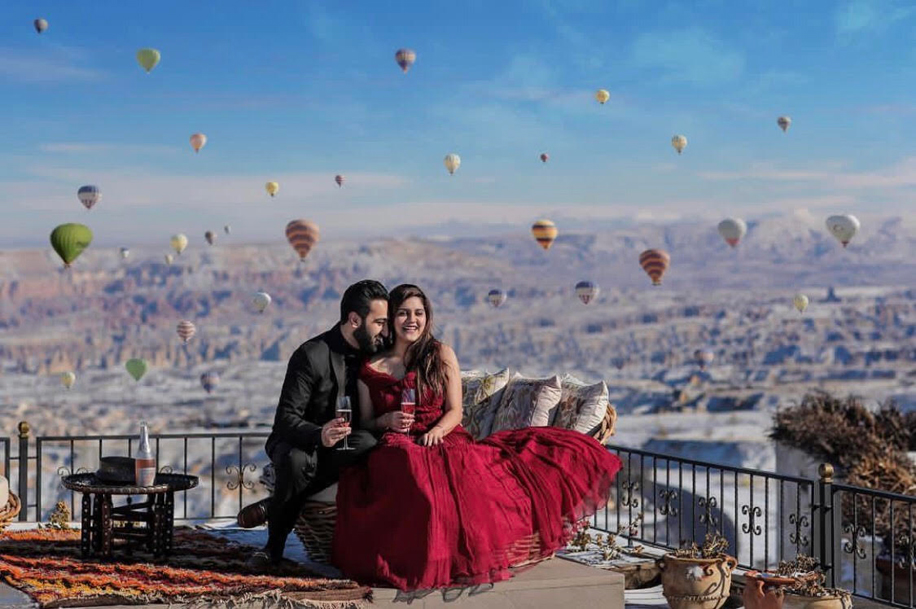 We stayed at the Museum Hotel Cappadocia, in itself an apt venue for a photo shoot. The snow on the ground was slightly challenging but also made for beautiful elements in the photos. We have amazing memories from the shoot that will be cherished forever.” 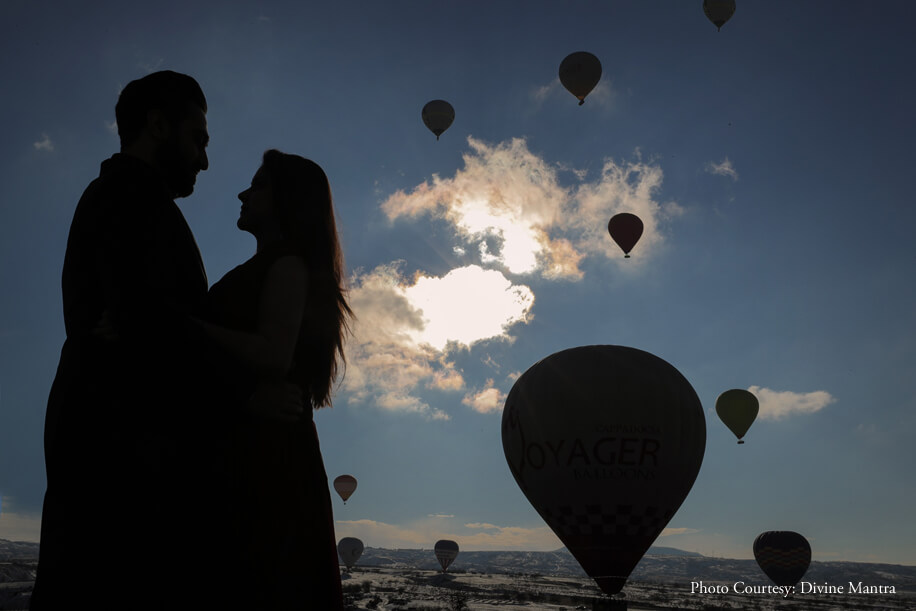 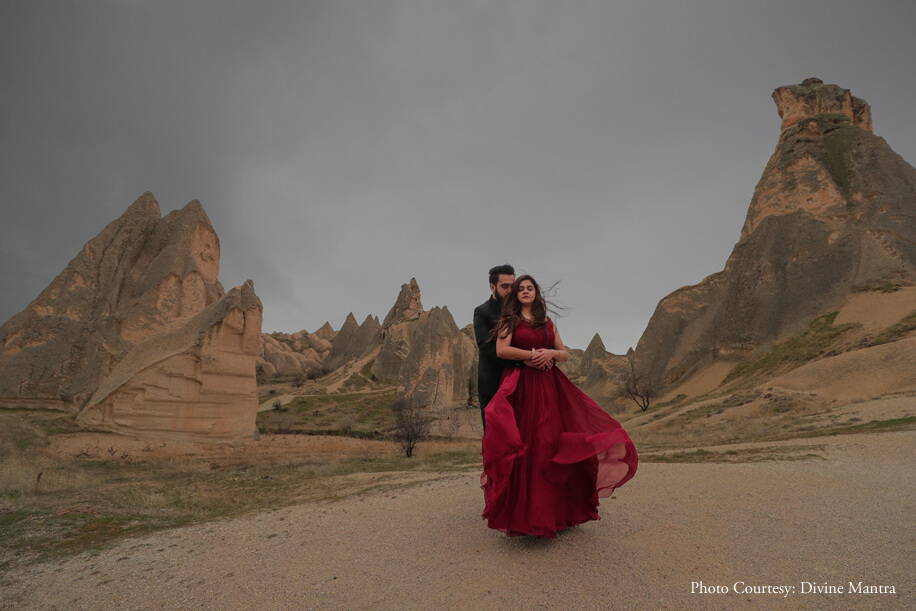 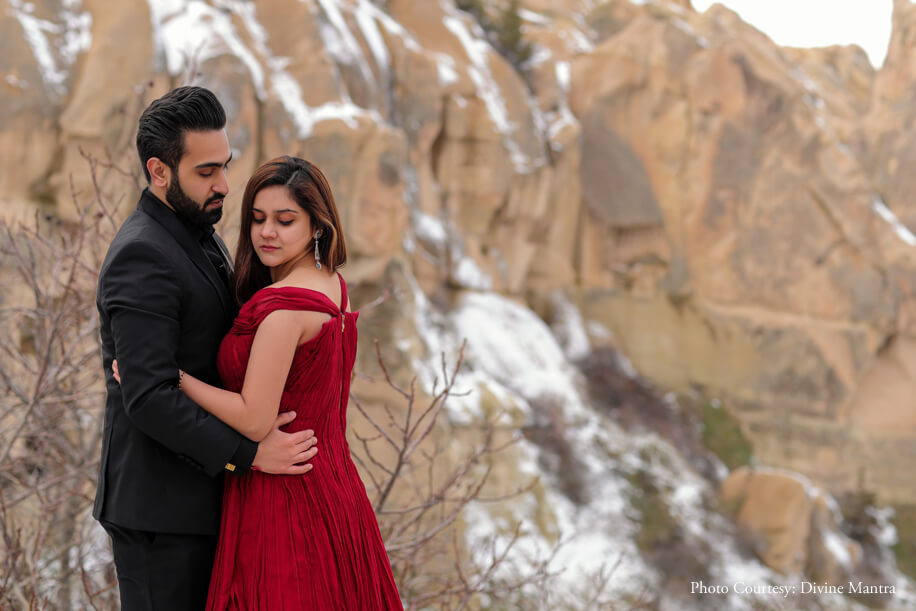 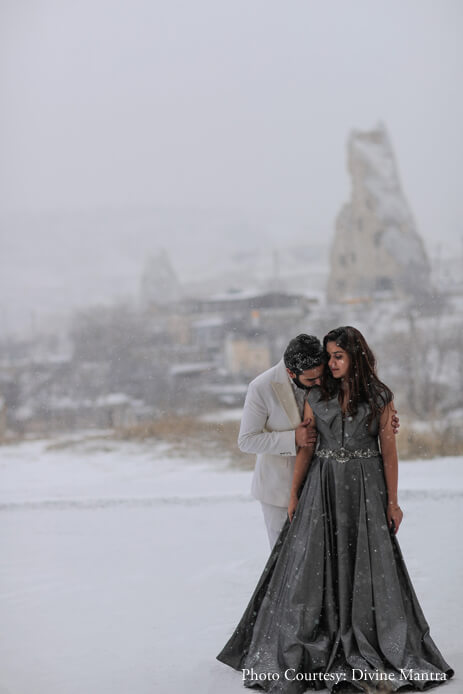 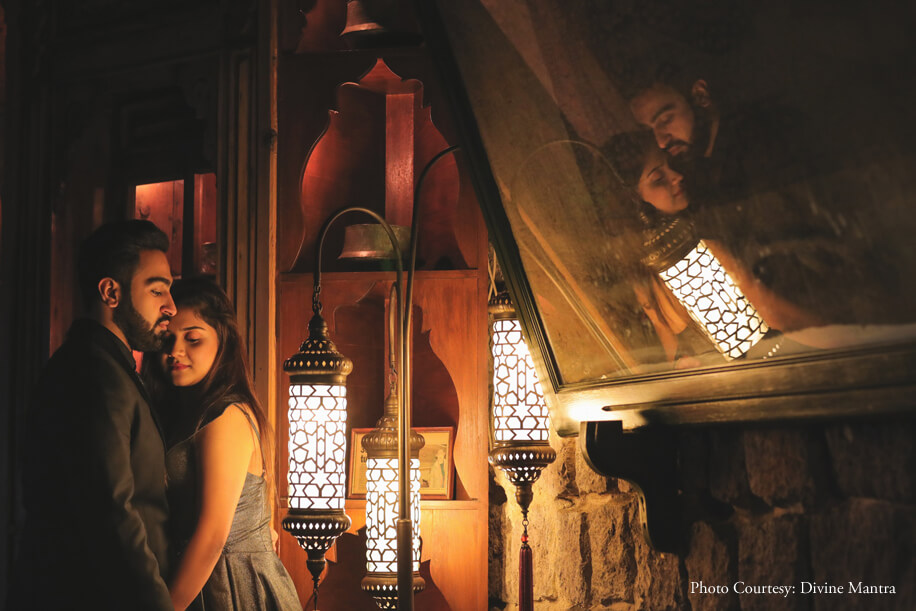 This entry was posted on Tuesday, April 2nd, 2019 at 10:07:35 am and is filed under Pre Wedding Photoshoots. You can follow any responses to this entry through the RSS 2.0 feed. Both comments and pings are currently closed.