Paris is the realm of the senses – cuisine, couture, culture – everything about its streets, its people, its places fills a visitor with a certain je ne sais quoi. And then, is it any wonder that such a sensual place is also regarded as the City of Love? The timeless romance of the city has been captured on film in many ways and the rising trend of pre-wedding photoshoots in Paris is just another leaf out of that book. Loved up couples all over, are coming to Paris to take snapshots of them wearing their hearts on their sleeves, the Eiffel Tower in the backdrop. 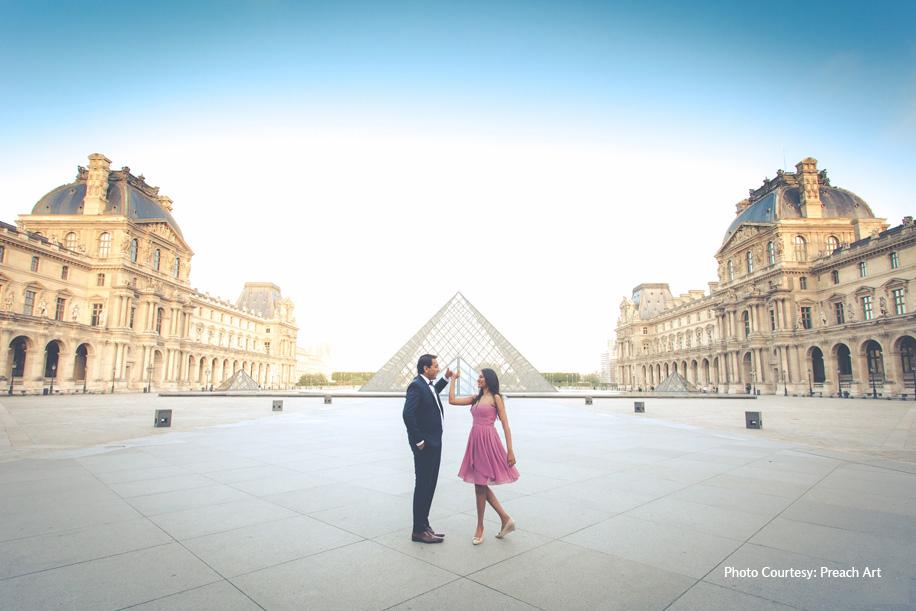 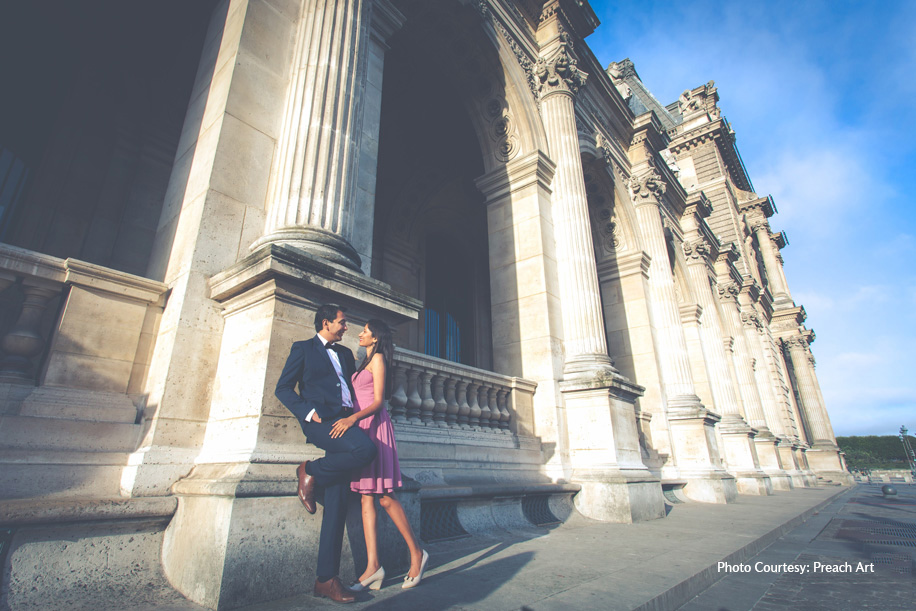 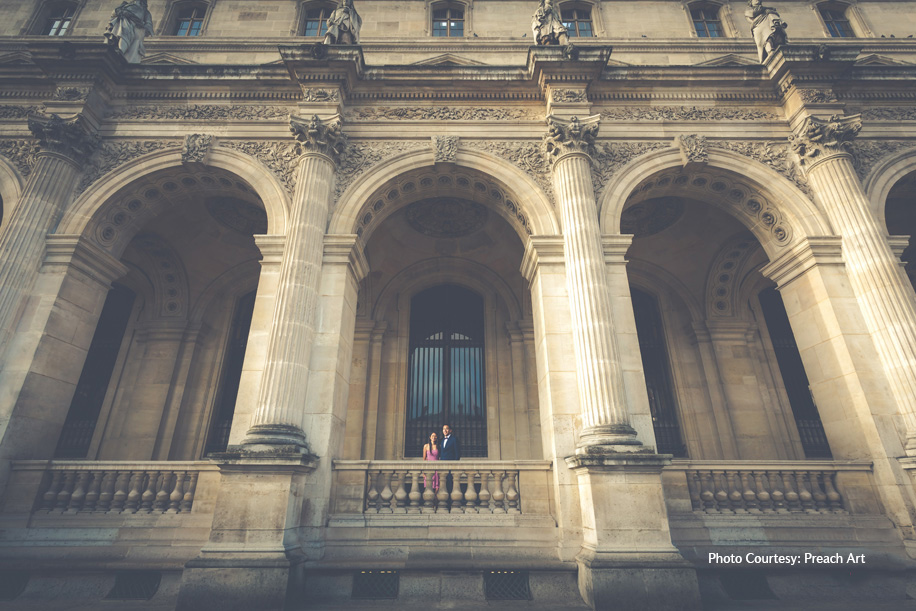 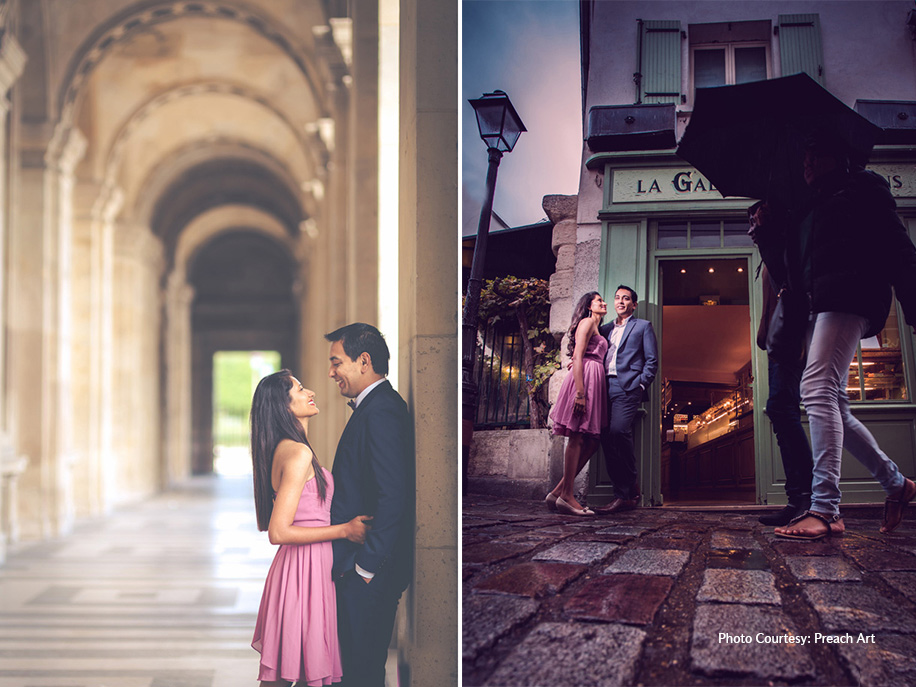 Pooja and Harsh knew they wanted a pre-wedding shoot in Paris. Harsh lives in Paris and so that’s one of the first things they mentioned when they asked their wedding photographers Preach Art to also capture their chemistry and love in the city against a few Parisian icons. Chanakya says, “Harsh wanted to capture the precious moments of Pooja discovering and experiencing his city.“ 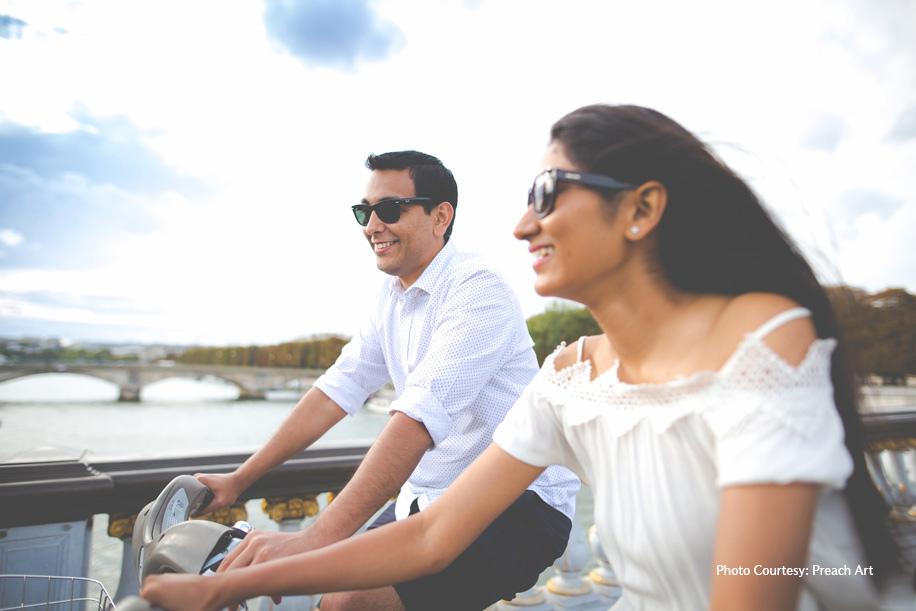 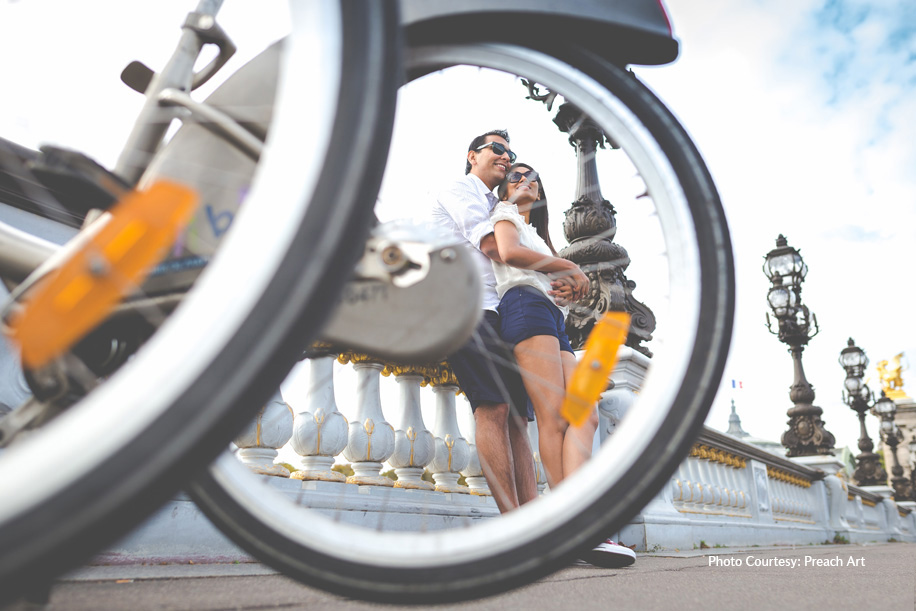 With a little scheduling and a whole lot of anticipation, Pooja flew to the city of love to be captured with the one who she loves in the late-summer light of September.

With all the pre-requisites in place, Harsh then took on the role of being the team’s guide around the city. He took them to his favorite locations with the best views of the icons they were shooting against. Chanakya says it made the shoot super efficient, “With Harsh showing us all the sweet spots, we shot over a span of two days.” 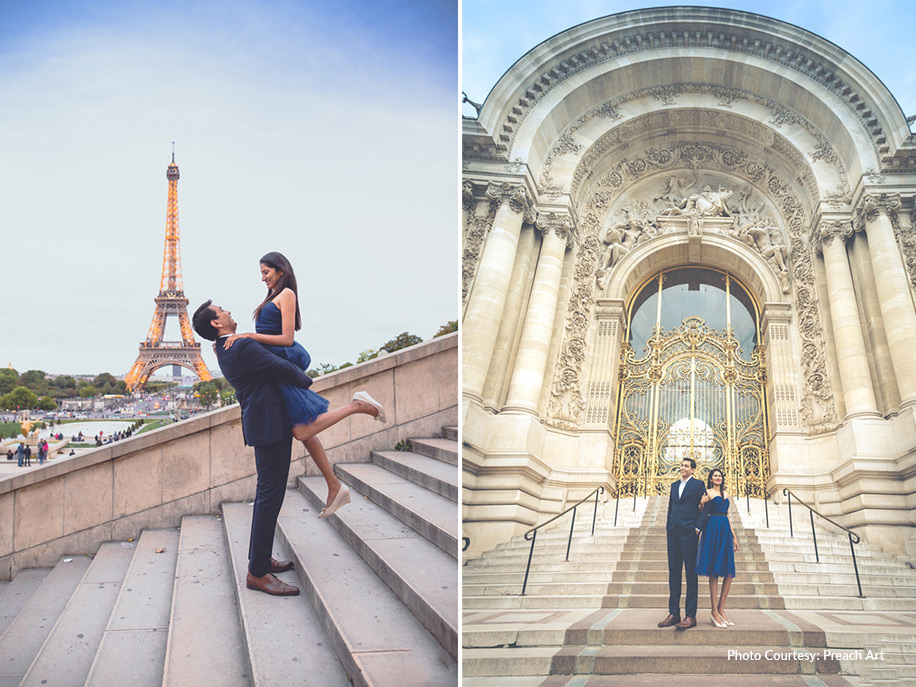 Take a look at the couple’s stunning photographs at Montmartre, Moulin Rouge, the Louvre, Champs Elysees and last but not the least, La Dame de Fer: The Eiffel Tower. 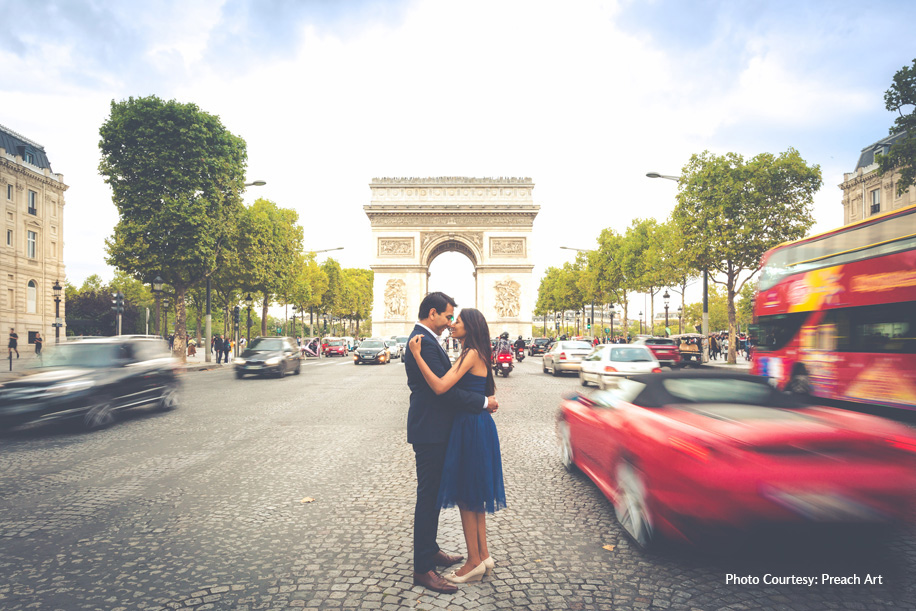 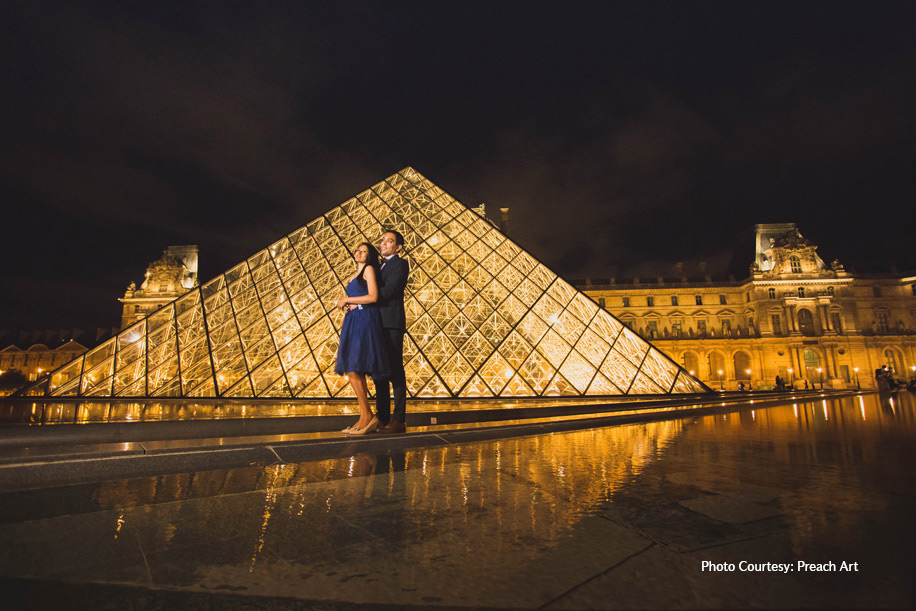 Each picture captures a facet of their emotions and Chanakya says the weather was no dampener either, “It was windy and drizzling and turned out to be the perfect ingredient for some fun ‘in the rain with an umbrella’ shots.” 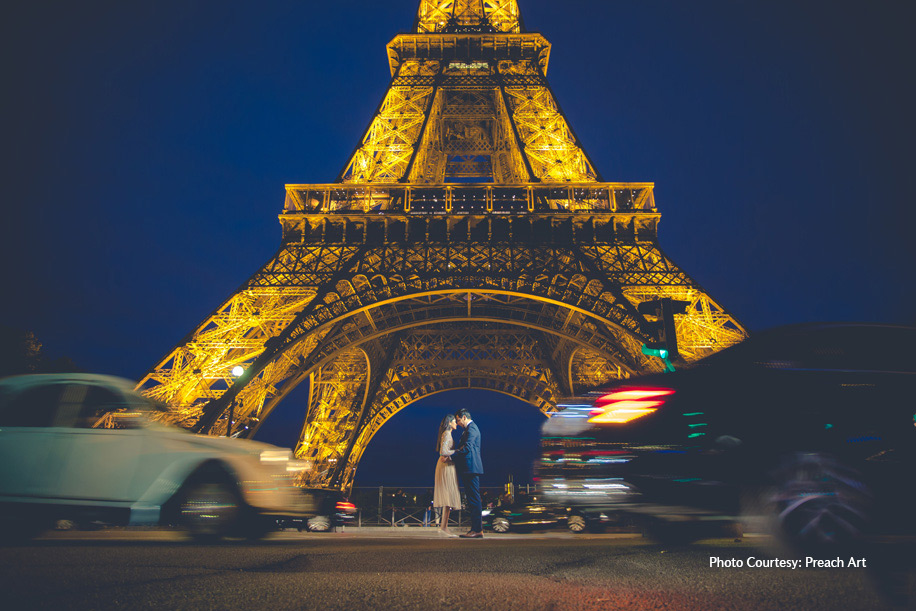 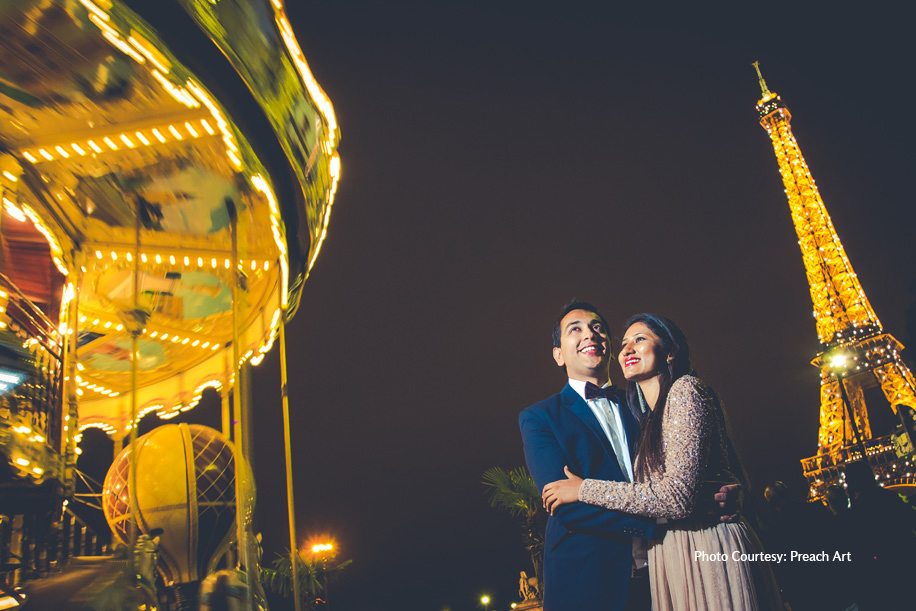 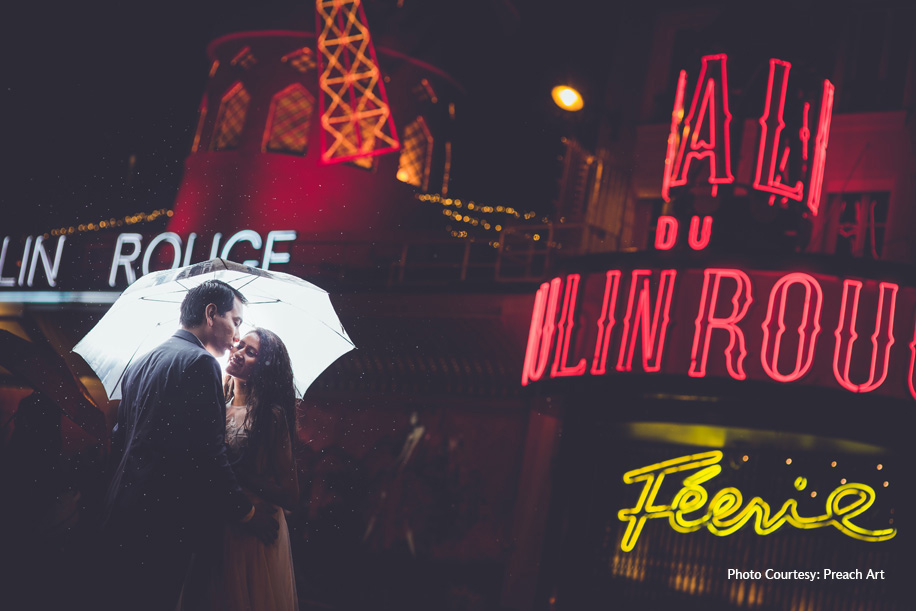 If you’d like to feature your stunning pre or post-wedding photos, share them with us at editor@weddingsutra.com.

This entry was posted on Monday, October 30th, 2017 at 2:37:04 pm and is filed under Pre Wedding Photoshoots. You can follow any responses to this entry through the RSS 2.0 feed. Both comments and pings are currently closed.