Our initiative ‘Love Actually’ features engaged couples and captures beautiful moments between them. The series celebrates people in love as they start their lives together. Over a fabulous makeover and a photo shoot, we get these couples to tell us how they met, capture the rare connection they share and talk about their day of love.
The latest edition of this series was all fun and games, quite literally!

For Poonam, an afternoon spent playing carrom or foosball with someone she loves is exactly how she likes to unwind. Bhavik on the other hand likes his leisure laced with luxury. The Mansion House, Alibaug was where both would find the perfect getaway. This swanky retreat, tucked away in the lap of nature, has a fully equipped Games Room, an environment of creature comforts and enough leeway to create lifelong memories as precious as platinum.

When Poonam’s mum insisted she meet Bhavik, she was reluctant and dubious about the outcome. Still, she did and the couple decided to meet again. “Our first three meetings went well but things really changed for us dramatically when he fell sick. He had severe conjunctivitis because of which he couldn’t step out of his house or face the sunlight. Since he was at home for a week, it gave us ample time to talk. I must have asked him about a million questions and he answered them all so patiently,” Poonam says.

Eventually, Poonam joked about her interrogation, “I told him he must be tired of me and my questions. And then he said that if I was going to be a part of his family one day, it was his duty to make me comfortable. I hadn’t even said ‘yes’ at this point! But he already felt this way and I knew he would take care of me for the rest of my life!”
Love, appreciation, and care are the bedrock of a strong relationship and in the days to come, Poonam realized that her decision to marry Bhavik could not have been more right. She says, “On one particular day I had a lot of work at the office and while we were chatting Bhavik realised I hadn’t eaten dinner. He called at 10pm and said he was waiting outside the building and was taking me out for a meal. I was only done at about 10:40 pm but he was still waiting right there. He wasn’t in any way obliged to do that. The fact that he stayed nowhere close to my workplace but still went out of his way and in addition, made it seem like it was no big deal was incredible! I really feel like the luckiest girl!”

Poonam isn’t the only one who feels blessed. Difficult situations come like tests in a strong relationship and the couple have already had those moments. “Less than a month after we were engaged my grandmother was very unwell, her condition was critical,” he begins, “We were in a very emotional place and simultaneously, lots of people were coming over to see her. Poonam just seamlessly assumed all the responsibilities of being hospitable to the the guests, organizing refreshments for everyone and taking care of the family from day to night over that period. It happened all so naturally, she truly left me amazed.”

In the span of only three months, the two forged an unbreakable bond bolstered by deep understanding and faith. “We can be mature when we want to be and horse around at other times,” says Bhavik and Poonam agrees. “Yes, most of the times we are pulling each other’s leg, but beneath all the fun we have something that is incomparably precious.”

The couple have been considering sealing their bond with Platinum Love Bands. Poonam says, “With each other we have found a love that time will not touch, that is reliable and precious, its strength is subtle and so is its beauty. These are the qualities that make our true love rare. And platinum really resonates with how we feel about our relationship and symbolizes everything our love stands for. So yes, we’d like to get platinum rings for each other.” 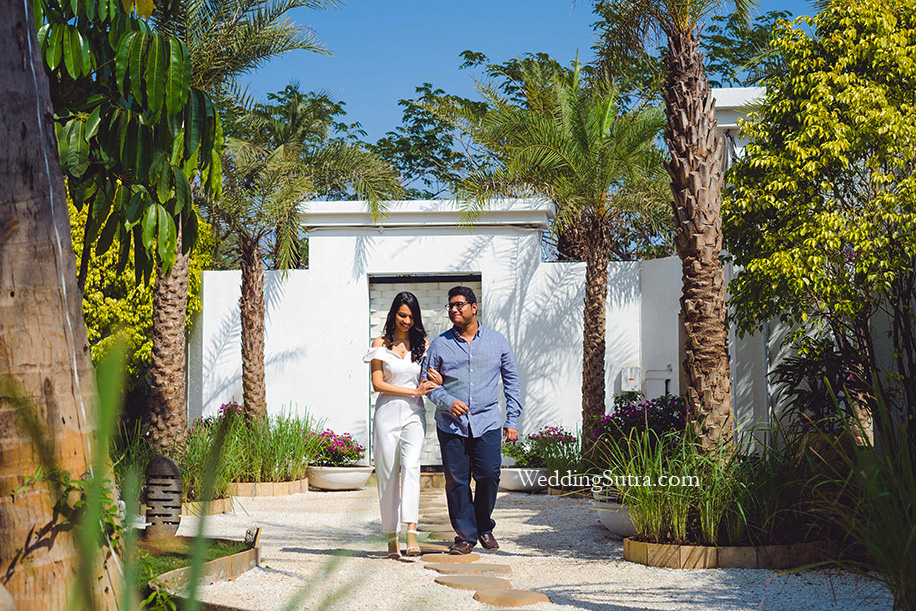 Bhavik planned a weekend that Poonam would never forget at The Mansion House Alibaug. Bhavik: Let’s head to the games room where you’ll have plenty of diversions and you can quit playing games with my heart! 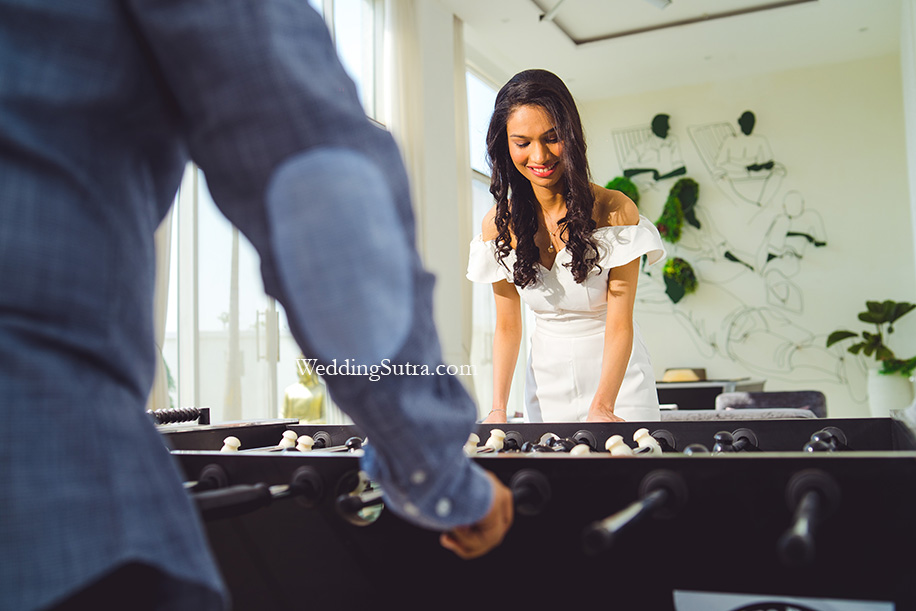 Poonam: That was a mean joke for which I’m going to take you down! 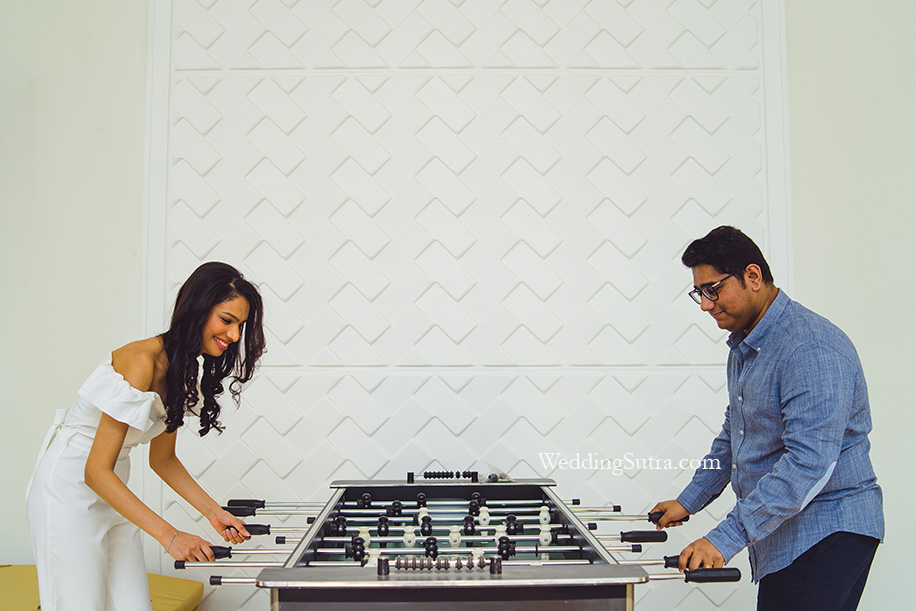 They shared a great laugh and had a (Foos)ball! 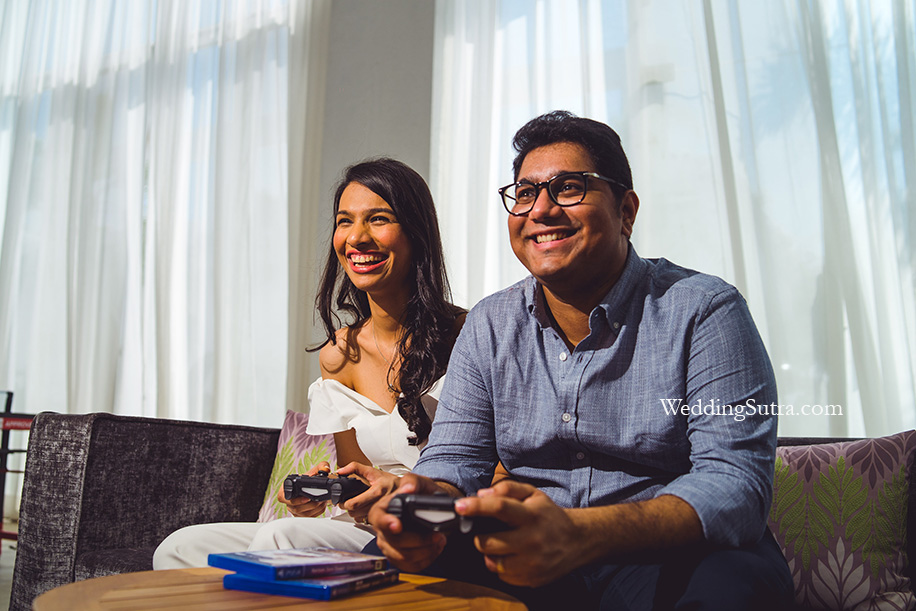 Then they played a video game where Poonam made it to the Hall of Fame! 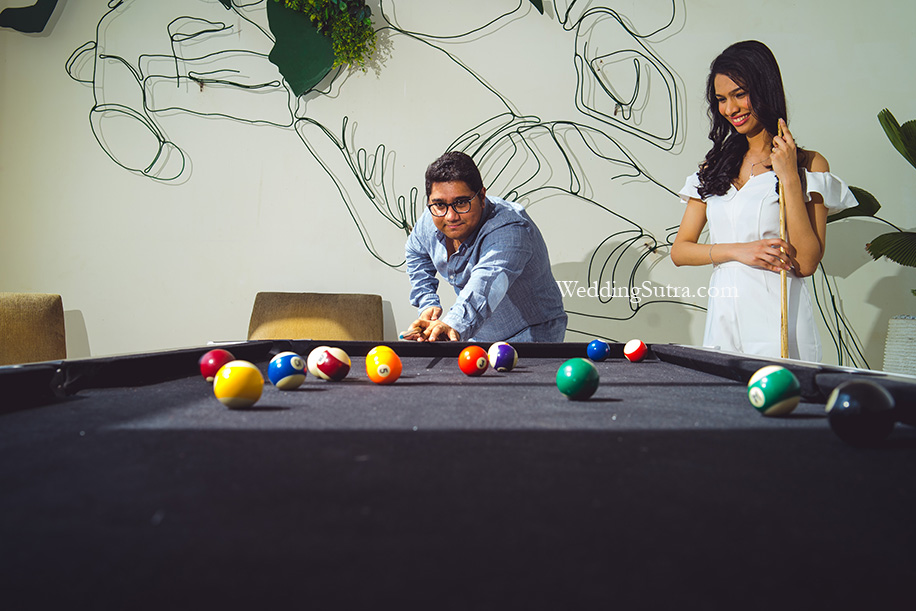 At the pool table, it was time for Bhavik to take the lead! 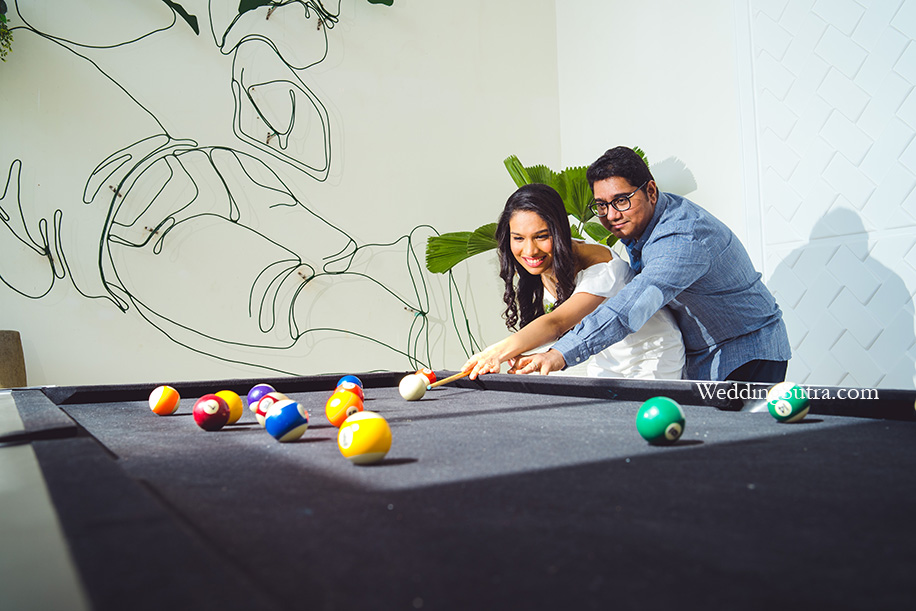 That’s an old Casanova move if we ever saw one! 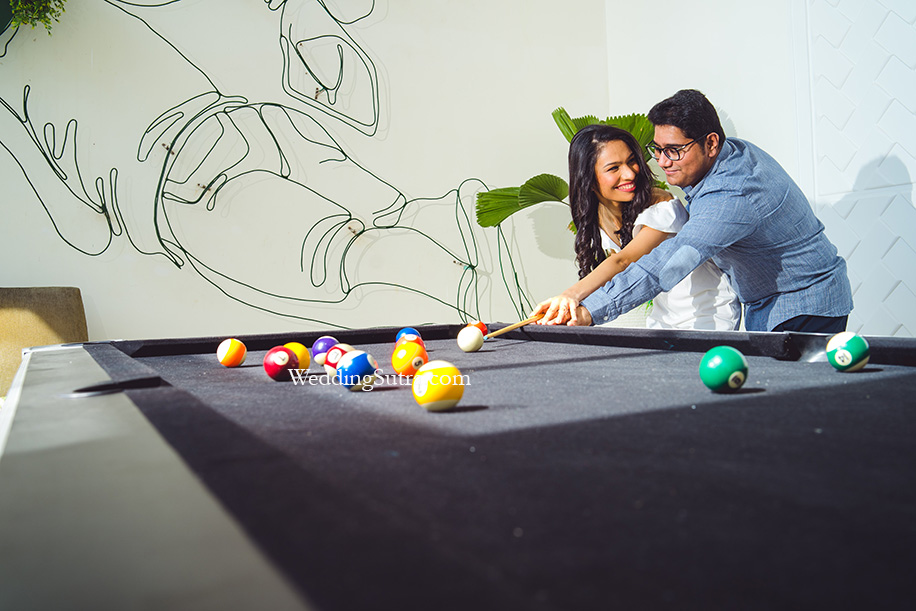 But wait a minute! What’s sparkling on the baize? 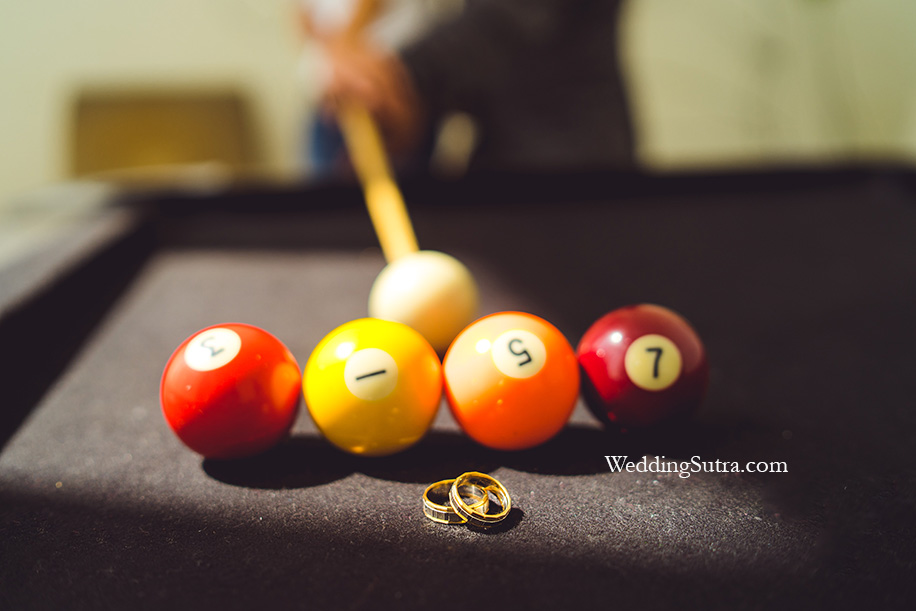 Bhavik quickly popped the question and Poonam squealed in delight! 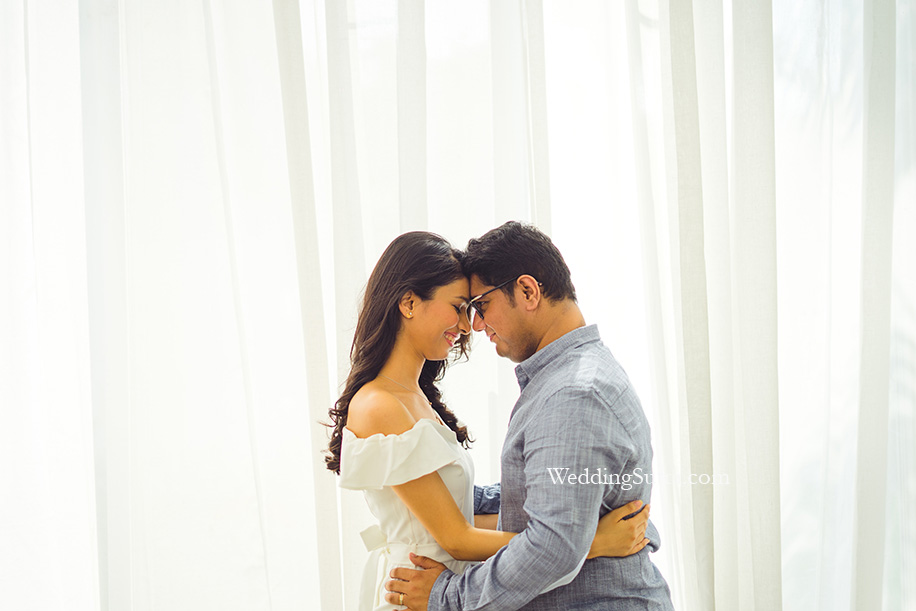 With this, their day of love reached its sweet conclusion. 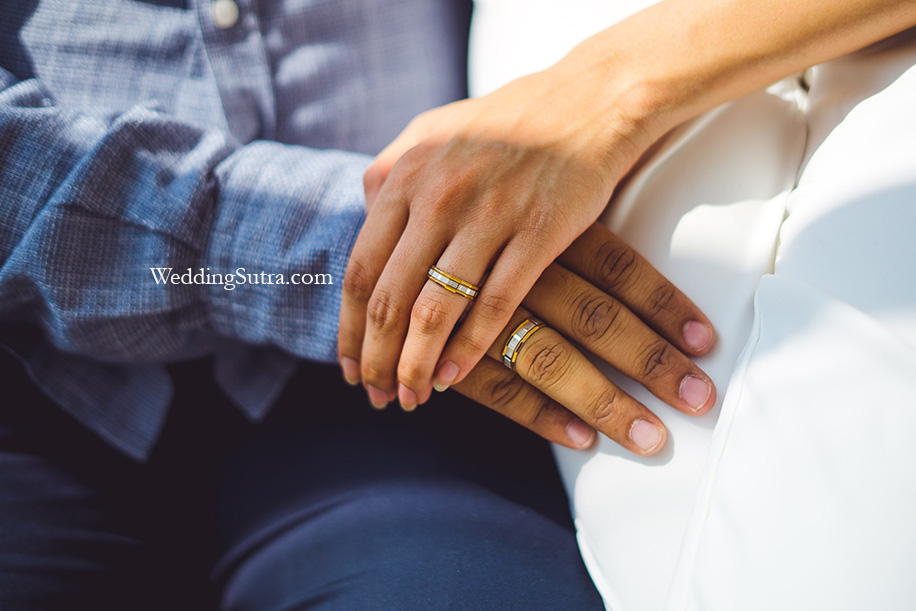 Their love, now bonded with the strength of platinum. 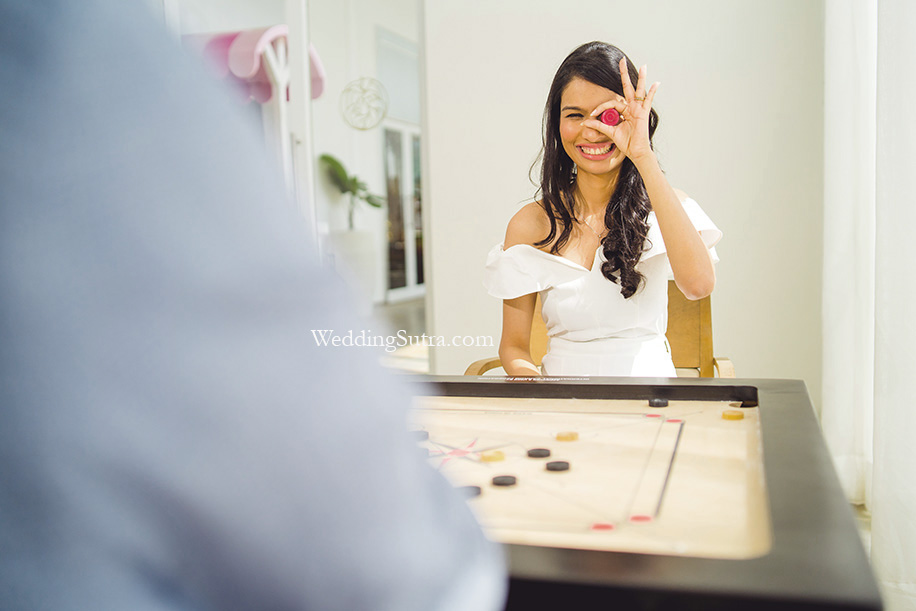 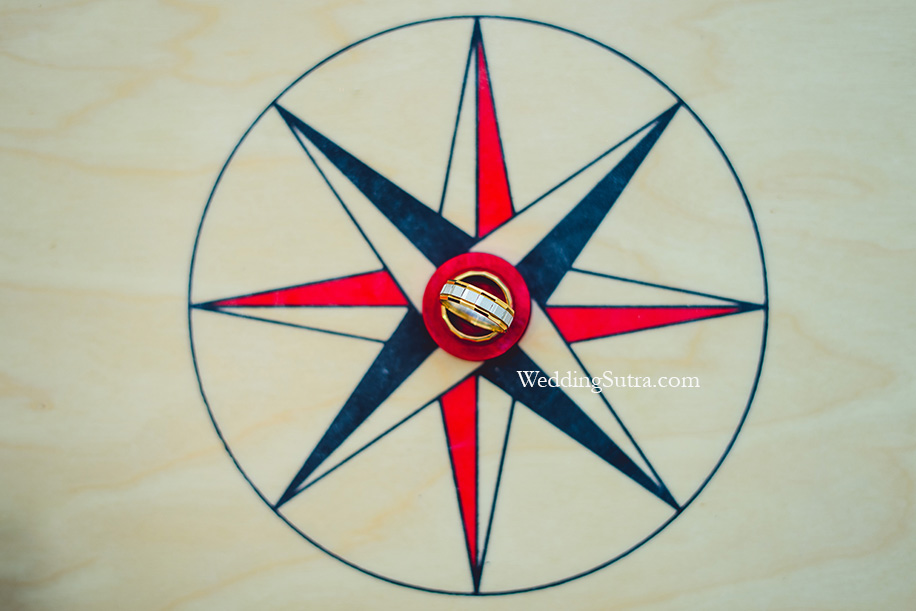 And this was only the beginning of their very own carom-com!

Poonam and Bhavik’s Platinum Day of Love was filled with endless goofiness and a lot of love. All the flirting and fun was deftly captured by Kodoclicker. Makeup artist Meena Pithoo Shu and hairstylist Sujata Sonawane had the couple camera ready at all times and were always at hand for quick touch-ups. The platinum jewellery for the day was sourced from Rasikalal Sankalchand Jewellers and each one of their pieces complemented the mood of the shoot.

This entry was posted on Thursday, March 7th, 2019 at 9:01:38 am and is filed under Love Actually, Precious Platinum. You can follow any responses to this entry through the RSS 2.0 feed. Both comments and pings are currently closed.