Rana Kapoor, the Head Honcho of YES Bank is hosting his daughter Raakhe’s wedding this month-end in Delhi. Raakhe and Alkesh Tandon’s engagement at Maurya Sheraton in April this year was a super-grand celebration, so quite obviously the wedding is expected to be a spectacular affair. Though the Kapoors live in Mumbai they chose to host the Sagaai and Shaadi in Delhi since many of their and the Grooms close friends and family live there. Raakhe and Alkesh at their engagement in Delhi

The celebrations are at The Leela and Taj Palace. The invitees, who include India’s who’s who are looking forward to the finale, a Celebratory Ball at a Farmhouse on 1st December which will have performances by a troupe who are being specially flown down from Paris.

Raakhe is Bindu and Rana Kapoor’s second daughter. A graduate of University of Pennsylvania, Raakhe works with her father in YES Bank. Alkesh is based in Dubai, where he runs Best Interiors, an international boutique design house. His cousin is Amit Bhatia, the son-in-law of Steel magnate Lakshmi Mittal. According to the grapevine the Mittal son-in-law introduced the couple when they were both holidaying with their friends in London. 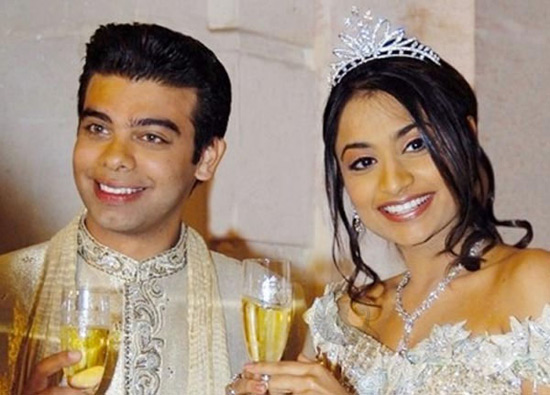 The Matchmaker- Alkesh’s cousin Amit Bhatia, with wife Vanisha Mittal at their wedding in 2004

This entry was posted on Tuesday, November 6th, 2012 at 2:13:10 am and is filed under Celebrity News. You can follow any responses to this entry through the RSS 2.0 feed. Both comments and pings are currently closed.