The season’s line-up of high profile shaadis started off in October with a destination wedding in Chantilly, France. Gokul Agarwal, scion of RNA Builders married Shloka, a lifestyle journalist, whose parents are Devangana and Vijay Chhabria (owner of Sea Palace Hotel, Colaba).  The 300 plus guests stayed in different hotels in the lace town and the celebrations began with a ‘Moulin Rouge’ theme sangeet at Le Musee du Cheval, where guests turned up in lace gowns, furs and masks. Day two was an Indian-theme night at an airport hangar where singer Mika performed. The main wedding ceremony was held at a magnificent castle. 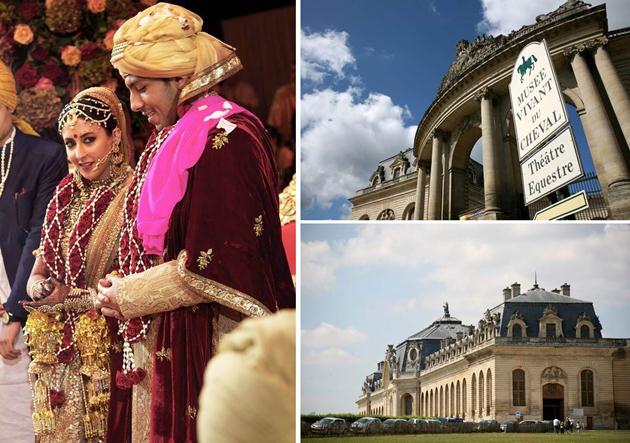 Last month, Mumbai was talking about two big ‘Bank’ weddings. Both were not big, fat weddings though. HDFC Bank Chairman Deepak Parekh’s son Siddharth wed his English-American girlfriend Claire O’Neil at an intimate celebration in Jodhpur. The functions included the Sangeet at Mehrangarh Fort, the Christian wedding at the Balsamand Lake Palace, and traditional Indian nuptials at Umaid Bhawan. The groom, an Entrepreneur and his bride, who works with the Taj Group of Hotels both wanted a private ceremony and the wedding was managed by Divinity Weddings from Mumbai. The guest list was small and all were requested not to give any wedding presents and donate to the charity Apne Aap Women’s Collective.

ICICI Bank head-honcho Chanda Kochhar opted for a good ol’ home town celebration for her daughter Aarti’s marriage to Aditya Kaji. The functions all elegant dinners with the who’s who of corporate India in attendance were held at Taj Mahal Palace, Taj Lands End and The Trident. Nita Ambani who is close to the groom’s family hosted a garba theme celebration at Antilla. 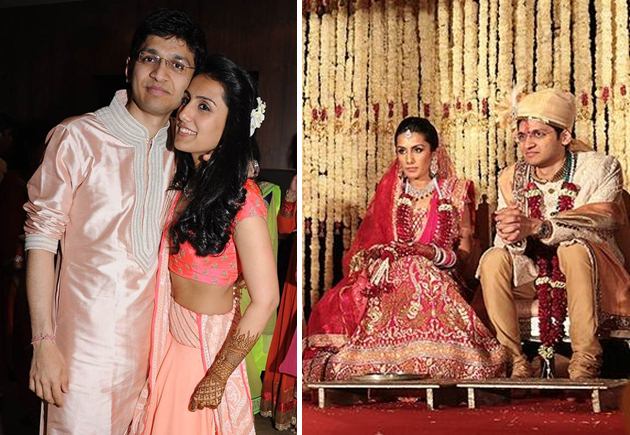 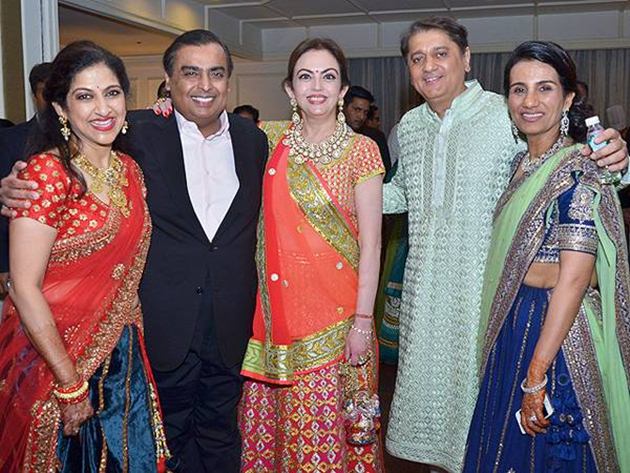 Delhi is talking about the big, fat wedding of Pallavi Lodha, daughter of Parasmal Lodha (part-owner of Peerless Finance) and Rahul Jain, son of FIEM Group’s Dr JK Jain. The pre-wedding functions were held at the Lodha’s 150-acre farm at Chattapur where singers Arijit Singh and Atif Aslam performed. The main wedding ceremony was held at a former PM’s sprawling residence.

Jaipur was witness to a ‘starry’ celebration when corporate head-honcho Sunil Alagh and actress Maya Alagh’s daughter Anjori, also an actress wed Delhi businessman Rohit Goyal. The celebrations were held at Samode Palace, Samode Bagh and ITC Rajputana and co-ordinated by Svaha Wedding & Special Events. Over 300 guests including Hrithik Roshan and Zayed Khan were there at the three-day celebrations. DJ Aqeel a close friend of the bride’s brother-in-law (Sameer Nair, Group CEO of Balaji Telefilms), kept the guests grooving till the early hours at the finale party.

If its a celebration in the family of Bollywood’s favorite couturier Manish Malhotra we needn’t tell you that it sparkled with star guests. Or that the bride wore the most mesmerizing Manish Malhotra ensemble! The ace designer’s niece Rriddhi wed Tejas Talwalkar (from the Talwalkar fitness chain family) and K Jo, Rekha, Sridevi, Urmila Matondkar, Akshay Kumar and Twinkle Khanna and Priyanka Khanna were there. All the celebrations (Sangeet, Pheras and Reception) were held at JW Marriott and styled by Gurleen M Puri. 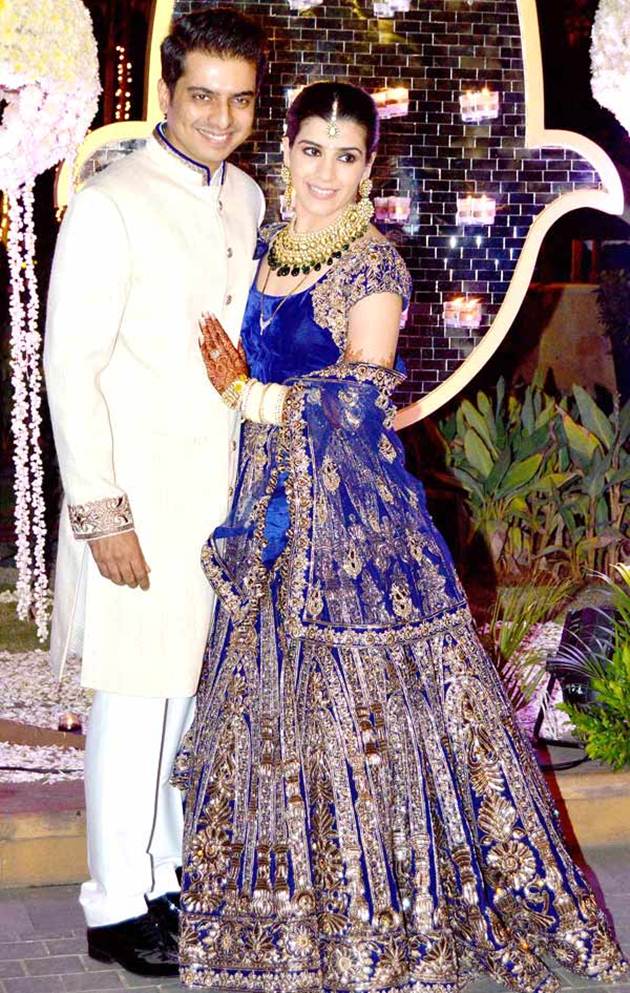 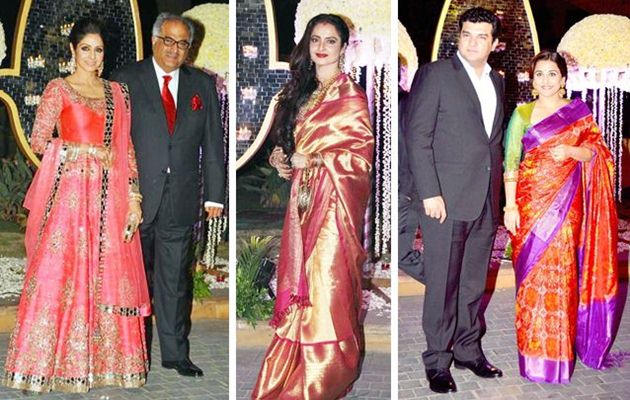 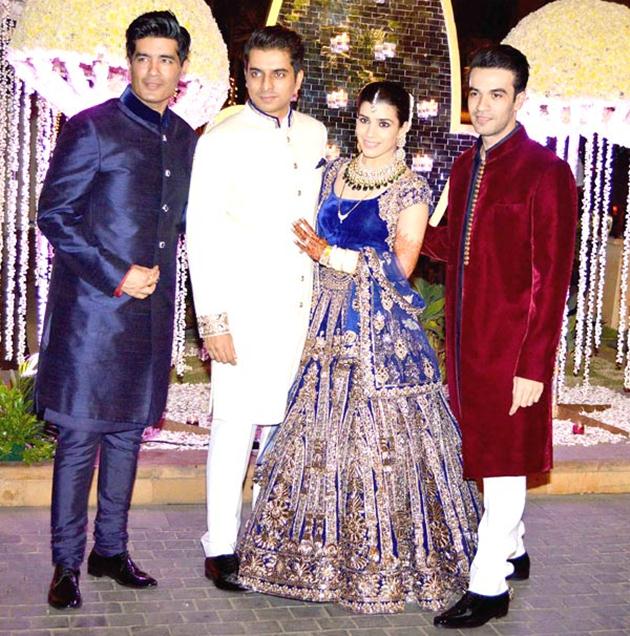 Rridhi and Tejas with Manish Malhotra and Punit Malhotra 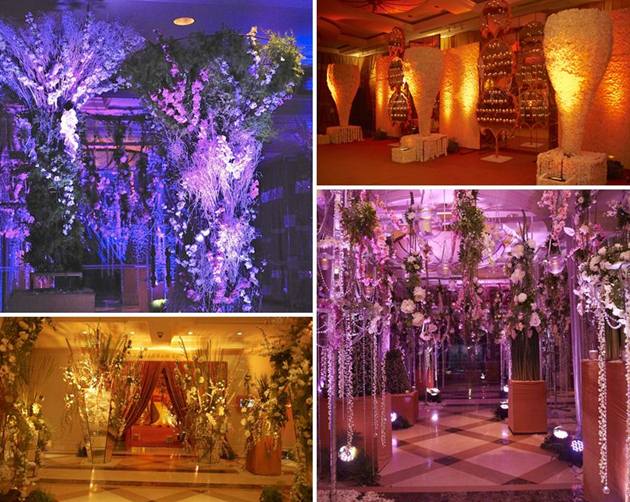 A blog post on glittering weddings will be incomplete without a mention of the ’21 Carat Weddings’ i.e. of the scions of most well-known Jewellers and Diamond Merchants. Delhi’s Hazoorilal Jewellers hosted the most spectacular celebration in Udaipur and Delhi with each event being styled by ace couturiers and managed by a different event companies. Mumbai’s TBZ family on the other hand hosted a private celebration at Grand Hyatt, Goa. Between this month and next, some of the biggest diamond merchants from India and Belgium are hosting weddings at the city’s newest mega wedding hot-spot- NSCI, Worli

Weddings 2015
The society wedding of 2015 is expected to be that of NRI business magnate Sanjay Hinduja with designer Anu (Mahtani) Mirchandani. According to a relative of the groom, the to-be-weds and their closest friend, a prominent Mumbai socialite are working with the finest talent from the world of weddings to make the Udaipur celebration a truly magnificent affair. After the 3-day celebrations at different venues like Jagmandir Island Palace, The Zenana Mahal and City Palace, the celebrations will continue in Mumbai with a reception at a South Mumbai hotel. In fact the same Udaipur venues hosted a very high profile wedding between November 21st and 24th. Ambika Patni, the daughter of the late IT business magnate Narendra Patni wed Scott Kennedy (from President Kenney’s clan) and guests flew in from over 20 countries for the celebrations at Zenana Mahal and Jag Mandir.

When interior designer and top art collection Kavita Singh and her husband Jasjit Singh (MD of Associated Capsules) hosted their son’s wedding at Umaid Bhawan Palace, The Gipsy Kings were flown in from South of France to perform live, and it was billed as the wow wedding of the year. Now their daughter Nandini Singh is engaged to Tariq Premji, son of of IT Mogul Azim Premji. But this time the Singhs have decided to keep it simple and low-key, much like the way billionnaire Premji known for his austere lifestyle would like it too; most likely the nuptials will be held close to Mumbai, in February or March 2015.

This entry was posted on Monday, December 22nd, 2014 at 2:55:44 am and is filed under Celebrity News, Wedding Planning. You can follow any responses to this entry through the RSS 2.0 feed. Both comments and pings are currently closed.