Prince Rahim Aga Khan (the eldest son of His Highness Aga Khan IV) married American Supermodel Kendra Spears (now known as Princess Salwa) in Geneva, on August 31st. It was a family and close friends only affair on the lawns of Chateau de Bellerive, the Aga Khan family’s 17th Century Home on the shores of Lake Bellrive in Geneva. The Aga Khan IV, a British national, is the 49th hereditary Imam of Ismaili Shi’as, and is regarded by his followers as a direct bloodline descendant of Prophet Mohamed, making Prince Rahim a descendant as well. 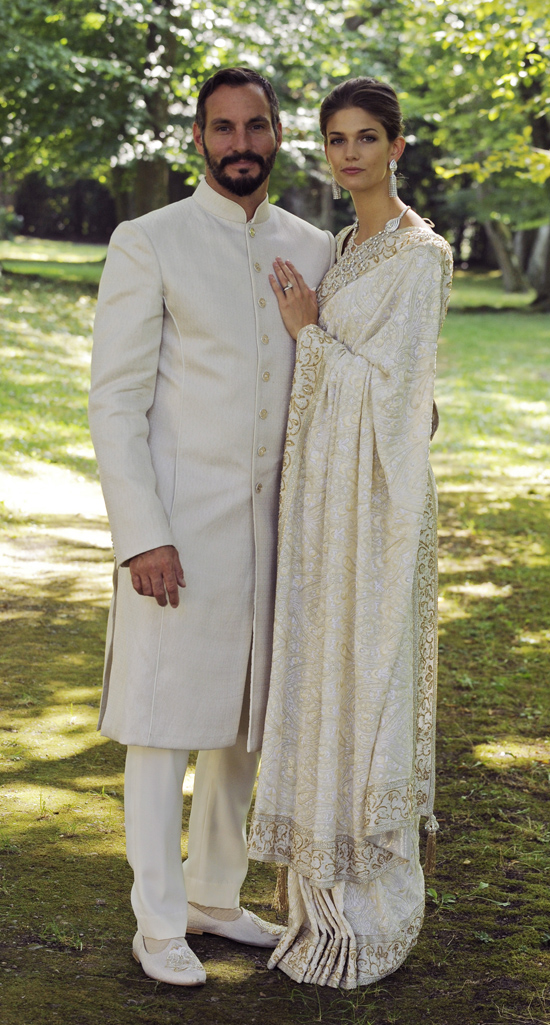 The 24 year old bride and 41 year old groom both wore ivory color ensembles by Delhi based Designer Manav Gangwani. Rahim wore a classic sherwani in pure silk brocade with an ivory shirt and trouser. His Princess wore a pre-draped saree with gold work paired with a traditional blouse with intricate jamawar hand embroidered work, decadent antique gold-silver glass beads and a touch of Swarovski crystals. She accessorized her traditional dress with sparkling earrings and a matching tiered necklace, wore her hair in an elegant chignon and kept her make-up natural . 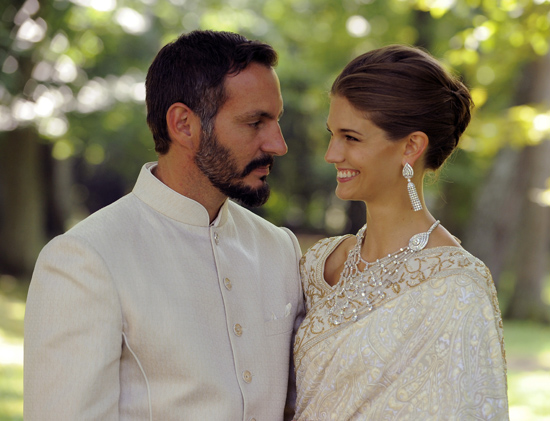 In case you were wondering how Princess Salwa got in touch with Manav Gangwani it was courtesy American super model Naomi Campbell for whom Gangwani had designed an ensemble during her last visit to India. Much to Gangwani’s delight after the wedding Princess Salwa tweeted: “Thank you Manav for the beyond-gorgeous sari! And thank you Naomi Campbell for the introduction.”
The Seattle-born Sociology graduate once hailed as the ‘next Cindy Crawford,’ was discovered via MySpace, by Ford Models, and she was a finalist at the Supermodel of The World competition in 2008 after which she made her debut at New York Fashion Week. Prince Rahim who studied at the Brown University in US and the Navarra Business School in Barcelona is involved in the poverty reduction efforts of the Aga Khan Development Network.

The Daily Mail, UK reported ‘Miss Spears has married into a family with a long-established history of beautiful brides. Her husband’s paternal grandfather was famously married to Rita Hayworth. Prince Rahim’s British mother, Princess Salimah Aga Khan, was known as supermodel Sarah Croker-Poole before she wed, though she and the Aga Khan divorced in 1995, she continues to be known by her married name. The Aga Khan, 74, then married German former pop star Gabriele Renate Homey in 1998, after which she took the name Inaara, though they divorced in 2011. Prince Rahim follows in the footsteps of his younger brother, who also married and later divorced an American model.’

‘It seems even princesses have to make a living’, the Daily Mail quipped. ‘Kendra Spears has just been announced as the face of Escada’s Fall/Winter 2013 campaign’.

This entry was posted on Monday, September 9th, 2013 at 12:14:16 am and is filed under Bridal Fashion and Beauty. You can follow any responses to this entry through the RSS 2.0 feed. Both comments and pings are currently closed.