Shashi Tharoor, 54 tied the ‘thali’ with Sunanda Pushkar, 48 symbolising the marital bond as per the South Indian customs, amid playing of ‘Nadaswaram’ and beating of drums. The venue was Tharoor’s ancestral home in Pallakkad. Tharoor wore a traditional Malayali attire of kurta and mundu, Sunanda, wore an off-white ‘veshti-mundu set’ and loads of Jasmine flowers on her hair.The tying of the ‘thali’ was followed by exchange of garlands and handing over the ‘pudava’, a piece of new cloth to the bride by the bridegroom, a tradition in Kerala. The ceremonies took place before a brass metal lamp with a ‘para’ filled with paddy and coconut shoots, symbolising plenty and prosperity.

The invitation to the wedding on the eve of Onam festival was limited to close relatives, friends. But a large number of mediapersons gathered to cover the occasion. The party from the bride’s side included Sunanda’s father Col Pushkarnath Das who lives in Jammu, and her 17 year old son. Congress leader Manishankar Aiyar was the only senior politician present for the ceremony. Ishaan and Kanishk, Tharoor’s twin sons from his first marriage were also present.

The couple are hosting a get-together in Thiruvananthapuram, Tharoor’s constituency after which they head to Dubai where Sunanda is hosting a reception in typical Kashmiri style. From there they fly to Spain for a short holiday before returning to Delhi to host a dinner reception on September 3. Well-known Mumbai Designer Shahid Aamir has designed some of the bride and groom’s outfits. Tharoor’s outfits include a bandhgala in black with cherry-coloured satin detailing and a black ensemble. For the bride, Aamir designed a fuchsia pink chiffon saree for the post-wedding lunch, a black and gold saree for the Dubai party and an off-white and gold khada dupatta with gota, kundan work for the nawabi theme reception in Delhi. 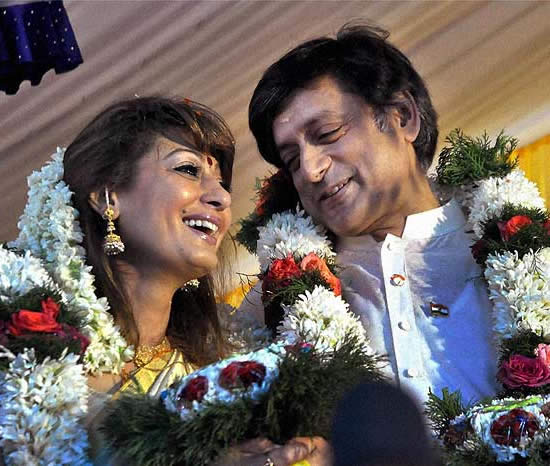 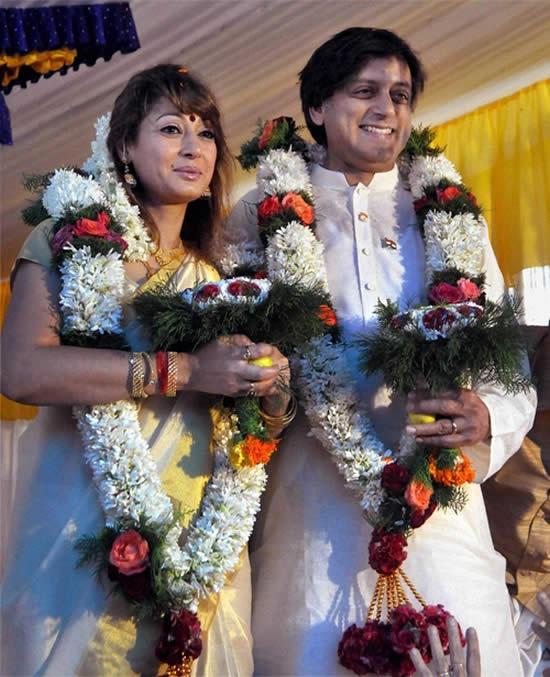 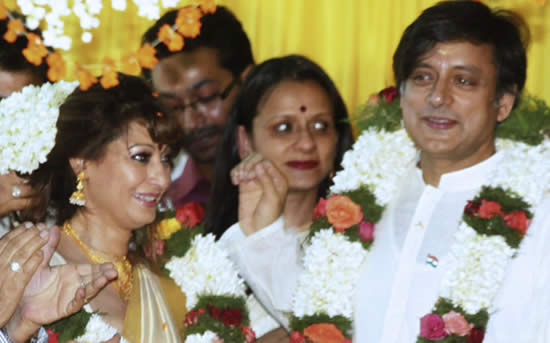 This entry was posted on Sunday, August 22nd, 2010 at 10:06:37 pm and is filed under Celebrity News. You can follow any responses to this entry through the RSS 2.0 feed. You can leave a response, or trackback from your own site.