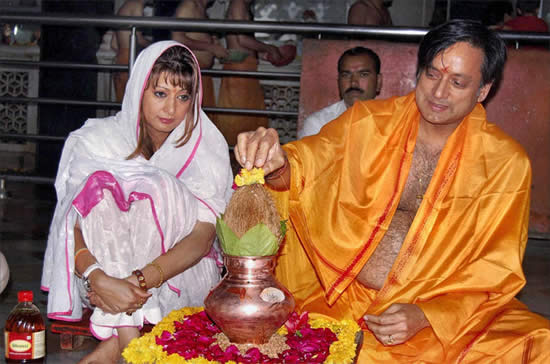 Sunanda Pushkar and Shashi Tharoor are both marrying the third time. Their wedding is on August 22nd and the venue is Tharoor’s 200 year old ancestral home in Palakkad, Kerala. The at-home wedding, a small function will be attended by Tharoor’s 94 year old grandmother, his US based mother and sisters and Sunanda’s father and brother. Later, the couple will host a reception in Tharoor’s constituency, Thiruvananthapuram and in Delhi. It is not confirmed yet if Tharoor’s twin sons Ishaan and Kanishk will attend the wedding.

Tharoor’s first marriage was to his childhood friend Tilottama Mukherjee, who is now a professor of Humanities in New York University. Their sons Ishaan and Kanishk both attended Yale University and are now pursuing careers in journalism. Tharoor second marriage was to Christa Giles, a Canadian civil servant.

Tharoor and Sunanda’s relationship made big news a few months ago thanks to the IPL controversy. Everyone was curious to know the background of the beautiful Kashmiri face who was courting the highly accomplished politician. And since she was suddenly in the limelight, there were questions galore. Sunanda’s work and career background is very different from Tharoor’s world of academics, literary pursuits and international government affairs. A Dubai-based corporate executive, Sunanda’s father was in the Army and she married Sanjay Raina when she was barely 19. Her marriage to Raina didn’t last long, and after some years she married Sujit Menon, a businessman who later passed away in a tragic accident. Their child Shivi Menon, now 16 was brought up by Sunanda in Canada and Dubai. Media reports mentioned that Sunanda is a beautician but this is not true. She has always worked with business houses with brief stints as an entrepreneur, in different service sectors like IT, Training and Real Estate. She was last working as a Sales Manager with Tecom, a Dubai Holding company managed by the Government of Dubai.

This entry was posted on Monday, August 16th, 2010 at 12:07:42 am and is filed under Celebrity News. You can follow any responses to this entry through the RSS 2.0 feed. Both comments and pings are currently closed.