Sonam Kapoor at IIJW Finale: The Empress of Style

India’s much loved fashion icon, Sonam Kapoor, was the epitome of elegance as she walked the ramp at the finale of India International Jewellery Week. While Sonam’s grace was enhanced by her Falguni and Shane Peacock maroon gown, the centre of attention was Sonam’s necklace, a one of a kind design, ‘Queen of the Night’ by Shaun Leane for international jewellery brand Boucheron from Paris. The Queen of the Night necklace was inspired by the flower of the same name; created with blue sapphires, white diamonds and rubies the necklace has a detachable part that can be worn separately as a pendant.

When asked for her comment on the necklace, Sonam spoke as a true jewellery lover, “The whole point of the look is very wild and other worldly. It reminds me of the Shakespeare’s description of Elizabethan age and their jewellery. This one piece enhances your beauty. There is a special mechanism that makes the flowers open and close.”

Sonam’s makeup was done by Celebrity makeup artist Mallika Bhat. Since the focus had to be on the jewellery, Mallika gave her a minimalistic look with the dewy skin as the focal point. 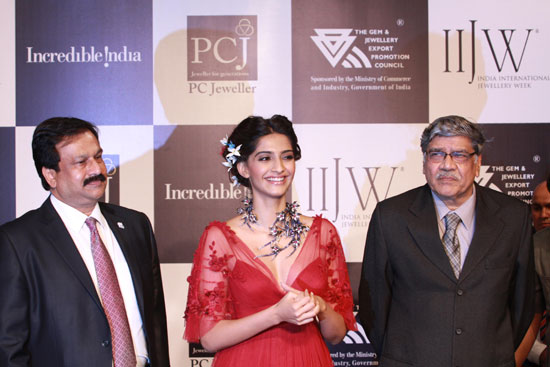 This entry was posted on Monday, August 8th, 2011 at 8:21:47 am and is filed under Bridal & Wedding Shows, Bridal Fashion and Beauty. You can follow any responses to this entry through the RSS 2.0 feed. Both comments and pings are currently closed.