What began as a long drive for Harry and Karina turned into an adrenalin-filled adventure on Dubai’s sand dunes and ended as a grand surprise. This proposal had all the makings of a romantic Middle-Eastern dream! 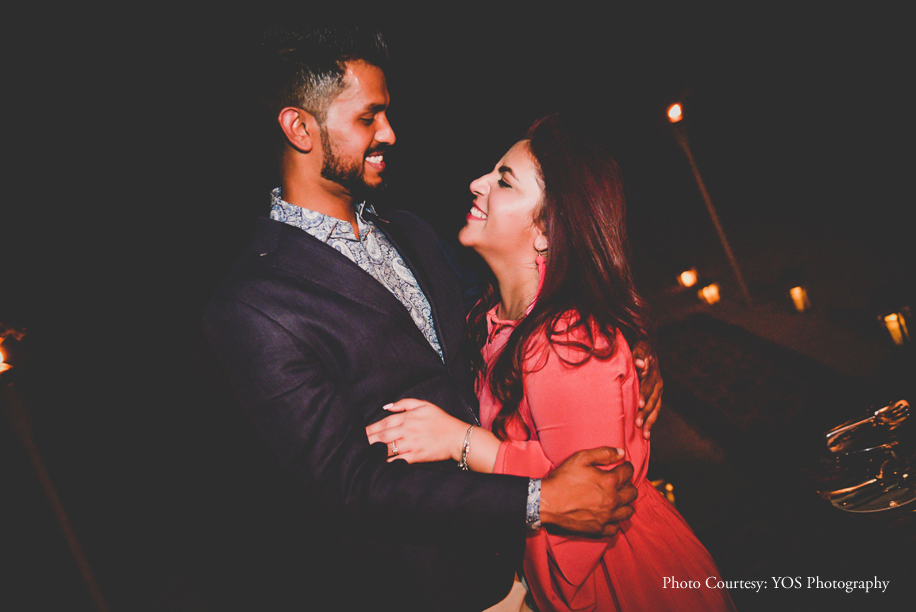 How We Met
Karina shares how she and Harry first bonded, “Our friendship started with a ‘Hey! Do we know each other?’ on Facebook, and we have been inseparable since then. Harry and I live in Dubai and have known each other for nine years. We attended the same university, and that’s how we got closer over time. We would spend our days discovering new restaurants and just enjoying each other’s company so much that we didn’t need anybody else.”

“After a year of knowing me, Harry asked me to be his girlfriend at a shopping mall’s terrace, which was our go-to place to prepare for our exams and work on presentations. It was the sweetest thing anyone has ever done for me!”

Planning the Proposal
“Harry had been working on a project in Abu Dhabi for two months. This made meeting up very challenging. Once he was back in Dubai, we were discussing how we should go to a nice place for Iftar during Ramadan to catch up and de-stress. He said he had a place in mind and that I would like it. We have very similar tastes, so I didn’t ask him where we were going. On the day we picked for our Iftar date, he picked me up and we kept driving for over an hour. I started wondering about where we were headed to! He often does silly things just to entertain me, so I was sitting in the passenger seat, feeling completely overdressed for something that was probably not an Iftar.”

Dreamy Desert Vibe
Much to my surprise, we reached the venue, Al Maha – A Luxury Collection Desert Resort & Spa, Dubai, and saw gazelles and oryx on both sides of the dark road that led us to the hotel lobby. We were then asked to get on a 4×4 SUV to enjoy a dune bashing experience after which we would be driven to the Iftar venue. Once we arrived there, I was stunned to see a cozy setup under the twinkling sky, amidst the serenity of the desert. The area had soft Persian carpets, comfortable floor cushions, a low-rise table and flame torches that lined the perimeter of the carpet. The glow of the torches combined with the desert atmosphere was a breathtaking sight; I was gutted that our phone cameras could just not do justice to how this evening looked. I didn’t find any of it suspicious as we both are super cheesy and plan romantic dates often and still send handwritten letters to each other!”

Savoring Memories
“We enjoyed our cold starters with a bottle of wine. Harry said he was calling the staff to get us another bottle of wine. While he was on the call, I played my favorite song ‘Perfect’ by Ed Sheeran so we could slow dance. We danced and looked into each other’s eyes and he shared how far we had come, the endless battles we faced and all his funny antics that I’ve dealt with over the years of our relationship. Earlier that morning, I had asked him about his one reason why he kept loving me all these years, but he hadn’t given a definitive answer. Under the moonlight, he reminded me of my question and said that he loves me not because I’m caring, ever-loving and supportive of him always but because he felt that even on his darkest days, even when I don’t have a solution to his problems, just knowing that I’m there for him makes everything feel perfect.” 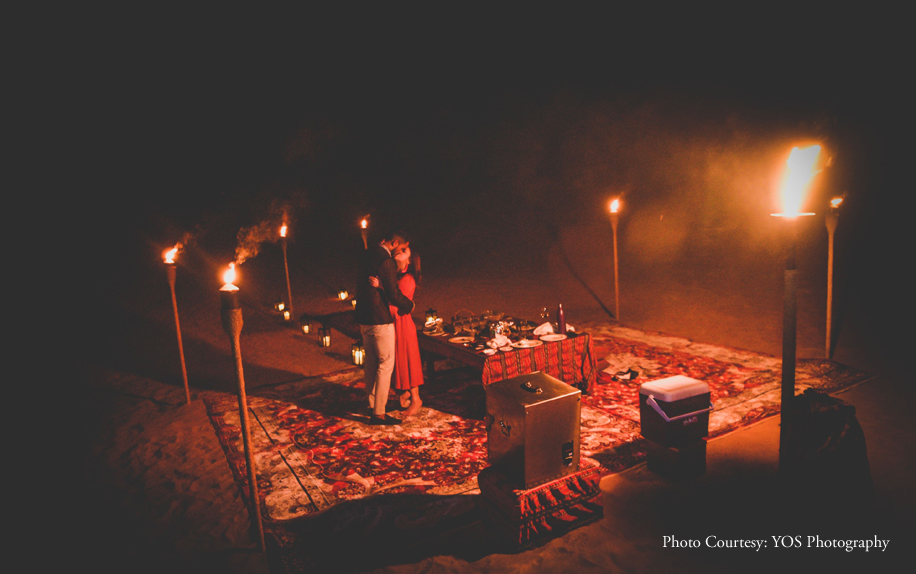 Bright Future
“We were still dancing, and we saw the 4×4 come our way, and it stopped further away from the dinner site. As I turned, I saw the photographer walking towards us. That’s when I felt the ring box in his blazer. Seconds later, Harry decided to take our eight-year relationship to the next level by going down on one knee and asking me to marry him. The dune behind him lit up with an LED light that said, ‘Will you marry me?’. I said, ‘Yes!’ with tears rolling down my cheeks. It’s a day I will cherish forever.” 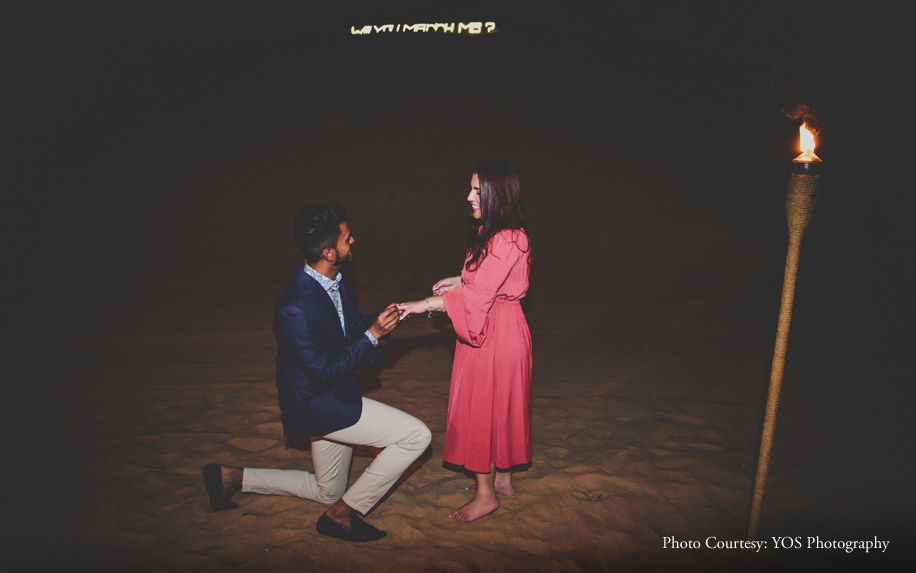 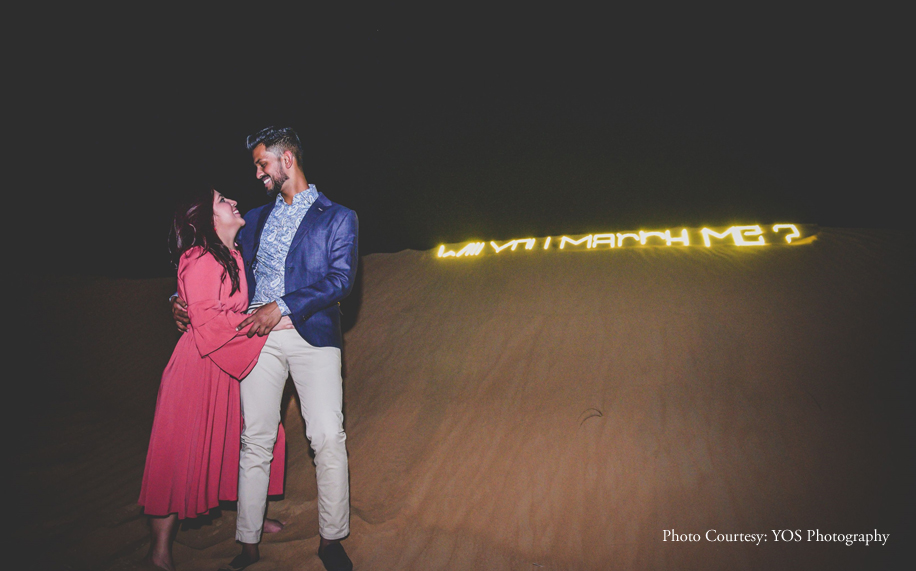 This entry was posted on Wednesday, May 29th, 2019 at 1:00:24 pm and is filed under Wedding Proposals. You can follow any responses to this entry through the RSS 2.0 feed. Both comments and pings are currently closed.