We take you to the lavish as well as low-key power weddings of the year at wedding venues which always leave us spellbound – Timeless Wedding locations like The Taj Mahal Palace and Taj Lands End in Mumbai, and destination hotspots like Oman, Vietnam and Turkey.

In 2019, we didn’t receive wedding invitations from Natasha Dalal-Varun Dhawan, Alia Bhatt-Ranbir Kapoor or Malaika Arora-Arjun Kapoor. However, that didn’t dampen our spirits thanks to the other flamboyant, fun, and fabulous A-list weddings. Here are some of them! 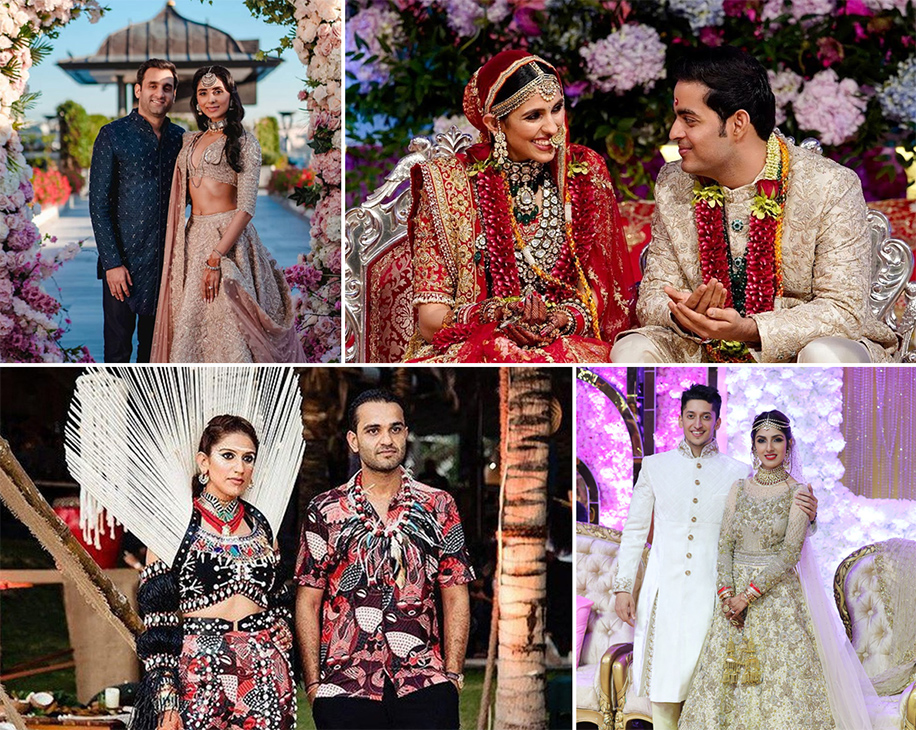 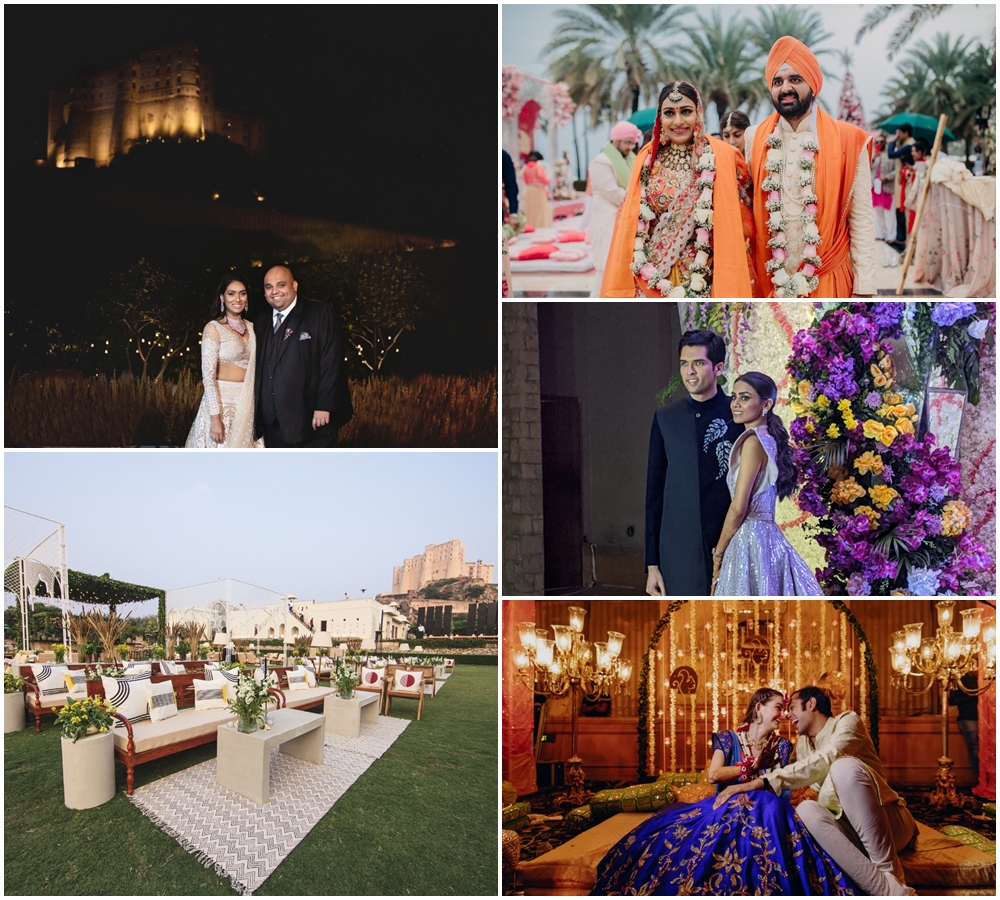 Akash Ambani and Shloka Mehta
Venues: Famous Studio, Dome@NSCI, Jio World Centre
Wedding Planners: The Wedding Design Company, Seven Steps (a division of Seventy EMG), DNA Networks, Milestones to Memories (MtoM)
From the heady pre-wedding celebrations in St. Moritz, Switzerland, where Bollywood superstar Aamir Khan danced with the bride, to their March wedding in Mumbai, Akash Ambani and Shloka Mehta’s nuptials were the talk of the town. The meticulously planned wedding and reception were held at Jio World Center and it’s adjoining gardens. Reports suggest that the reception was attended by around 20,000 guests! Bollywood stars like Shahrukh Khan and Ranbir Kapoor danced in the baarat, and big names from the business, corporate, political, and showbiz worlds attended the magnificent functions. After all, Mukesh Ambani, the groom’s father, is the Chairman of Reliance Industries, and the bride is the daughter of diamond tycoon Russell Mehta, Chairman of Rosy Blue Diamonds.

Daria and Dheer Momaya
Venues: Taj Lands End, The Taj Mahal Palace, Mumbai
Wedding Planners: ENJAY Events
DJ – DJ Ganesh
When the groom’s mother is Chhaya Momaya, a well-known social influencer who has orchestrated several luxury brand launches you can be sure her son’s wedding will a magnificent affair. Filmmakers Dheer Momaya and Daria’s (from Ukraine) wedding celebrations at Taj Lands End and mehndi at the Rooftop Rendezvous was followed by a power reception at The Taj Mahal Palace in Mumbai. The highlights included an all-vegetarian continental spread with favorites from the different Taj restaurants including camembert soufflé (served at the erstwhile Zodiac Grill), and soulful live performances by musicians from India and Ukraine.

Divya Khandelwal and Aman Kapur
Venues: Alila Fort Bishangarh, Jaigarh Fort, Fairmont Jaipur
Wedding Planners: Atelier X (Jai and Sonali Thakur)
Divya Khandelwal and Aman Kapur, both scions of Jaipur business magnates tied the knot at a grand wedding at Alila Bishangarh that saw over 1,000 guests at the home town wedding. Sustainability was the main focus of the main wedding function, to keep a low carbon footprint, the wedding designer Devika Narain used local grass (sarkanda), bajra, and mustard flowers as the main decorative elements, most of which was grown specially for the occasion by Alila. All furniture, and fabric was locally sourced and reused post the wedding at Alila. The overall décor matched the interiors of the imposing fort, which served as a wonderful backdrop to the eco-sensitive wedding ceremony on the pool. Food of the hunter was provided by Alila Fort Bishangarh’s organic farms and by their ancient cooking techniques (including a heated sand pit) and by Zorawar Kalra’s Legacy Catering while Javed Ali provided the Sufi backdrop with his melody.

Pernia Quereshi and Sahil Gilani
Venues: Four Seasons Istanbul, The Taj Mahal Palace Mumbai
Wedding Planner: Sylvia Moin (SM Weddings)
After a proposal in Istanbul, Turkey, and a bachelorette in Tulum, Mexico, style maven and entrepreneur Pernia Quereshi tied the knot with Mumbai businessman Sahil Gilani at the Four Seasons, Istanbul. Later, the boy’s father (Raju Gilani of GITS) hosted an elegant reception for the newly-weds at the ballroom of Mumbai’s Taj Mahal Palace. For the sangeet celebrations in Turkey, Pernia opted for a gorgeous pastel lehenga by Pakistani designer Faraz Manan. For the reception in Mumbai, she decided to restore and re-create the farshi gharara worn by her mother on her wedding day. She shared a picture of the outfit on Instagram and wrote: “The most special outfit yet. My mom’s wedding farshi gharara recreated and restored for my wedding. It was originally hand stitched by my grandmother for my mother and now recreated by @houseofkotwara.”

Kaabia Grewal and Rushang Shah
Venue: JW Marriott Phu Choc Emerald Bay Resort and Spa, Vietnam
Wedding Planner: Horizon W.I.E.
Fashion entrepreneur Kaabia Grewal (of accessories label ‘Outhouse’ fame) tied the knot with South Mumbai businessman Rushang Shah at a celebration which was considered one of the most interesting and inventive. The bachelorette in Mykonos, Greece, was designed by the bride’s best friends and resort-wear designer duo, Shivan and Narresh. The Grewals from Ludhiana and the Shah family from Mumbai hosted over 300 guests at a luxury resort in Vietnam, and the functions included a tribal themed mehndi and a ‘Mad Mansion’ sangeet party that celebrated imagination, art, and transcendental theatre.

Nusrat Jahan and Nikhil Jain
Venues: Six Senses Kaplankaya, Turkey, ITC Royal Bengal Kolkata
Wedding Planner: ESL Events
Kolkata-based Bengali actress and All India Trinamool Congress MP Nusrat Jahan wed designer-entrepreneur Nikhil Jain at an intimate four-day wedding at a luxury resort in Bodrum, Turkey. From a boho mehndi to a traditional wedding, the festivities at the sea-facing Six Senses Kaplankaya were a cozy affair, unlike the power-packed reception in Kolkata, which was attended by Mamta Banerjee and senior ministers of the TMC party, peers from the Bengali film industry, and other celebrities.

Tanya Seth and Azhar Morani
Venue: Dome@NSCI
Wedding Planners: Cineyug Celebrations and Dome Occasions
Azhar Morani, son of Cineyug Entertainment CEO Mohomed Morani and nephew of producer Karim Morani, wed girlfriend Tanya Seth at a glittering, star-studded ceremony in Mumbai. Bollywood star Shahrukh Khan shook a leg on the stage at the sangeet, and also swept the bride off her feet while dancing to his hit song ‘Gerua.’ The Dome@NSCI was resplendent with stunning sets for different functions, along with magnificent decor for Tanya and Azhar’s wedding. Stars like Salman Khan, Juhi Chawla, Sonakshi Sinha, Sonu Nigam and Rekha attended the celebrations.

This entry was posted on Wednesday, December 18th, 2019 at 10:09:30 am and is filed under Celebrity News. You can follow any responses to this entry through the RSS 2.0 feed. Both comments and pings are currently closed.