Lakshmi Mittal may be the richest Indian in the world but he became a household name in India, only after his daughter Vanisha’s wedding in 2004 and now, the Mittal family is a ‘dream’ client for all top shaadi specialists. On 5th May his brother Pramod Mittal’s daughter Vartika got married at the luxurious Ciragan Palace in Istanbul. While the media in Turkey went ga-ga about the Steel King’s niece’s wedding, many other events hosted by the Mittal family have been much talked about, some being controversial too! We feature some of them and profile the biggest names in the fashion and shaadi business who make them happen. 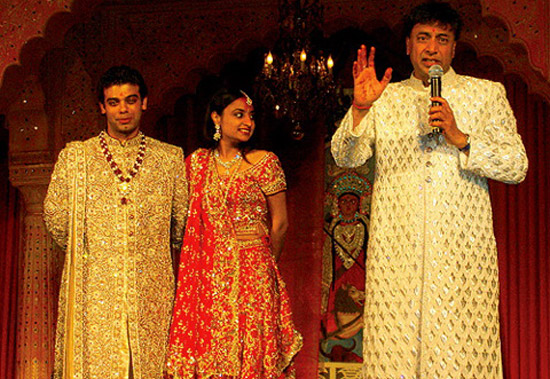 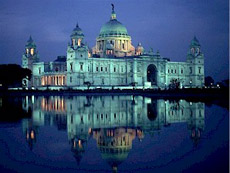 Five years before Vanisha wed in France, Lakshmi Mittal’s son Aditya wed Megha Patodia in Mittal’s home-town Kolkata. Mallika Sarabhai and Mamta Shankar performed at the sangeet at Victoria Memorial and the wedding venue was the palatial residence of the Jains (of the Times of India group). Some of Calcutta’s citizens reacted with shock at Victoria Memorial’s trustee’s decision to rent out the sacrosanct monument for a ‘shaadi’. “Shameless money power has asserted over good sense” they screamed. “Next, Mittals will want to hire the Taj Mahal”. Mittal paid Rs 9 lakh as rent to Victoria Memorial, and back then, this was a jaw-dropping figure, but Calcutta’s business community quipped that Victoria Memorial trustees were no match for the Mittals and that he got a great deal for a steal!

Pramod Mittal 50th birthday was celebrated in Central London and as part of the grand celebration, there was a big bollywood show, Sajid Khan hosted the event, SRK played James Bond, and Bipasha Basu, Celina Jaitley and Dia Mirza were the sexy sirens. The event was orchestrated by the Moranis, Mittal’s favourite event managers who also managed Vartika-Utsav’s wedding in Istanbul.

Abu-Sandeep, Tarun Tahiliani and Suneet Varma worked on Vanisha trousseau and bridal wear—the biggest contract was awarded to Abu Jani and Sandeep Khosla who design occassion wear for the Mittal family. The Mumbai-based duo designed Vanisha’s wedding outfit and 15 other outfits for her Trousseau. Tarun Tahiliani, designed the lehenga for the doli night, while Suneet Varma made the ensembles for the Sangeet, Bollywood night and the Mehndi. 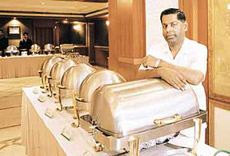 Caterer turned restauranteur Munna Maharaj is a favourite of high profile industrialists seeking the ultimate vegetarian spread. The Kolkata-based chef’s first big break was in 1988, when he whipped up delicacies for Kumaramangalam Birla’s wedding in Mumbai, but he became known as India’s catering king, when he cast a spell with his epicurean delights at Vanisha’s wedding. Munna flew to Paris with his team of 38 chefs to prepare all the vegetarian meals at the six-day wedding affair, and his signature items Jodhpuri chakki ki subzi, the nine course badam mithai and Lakshmi Mittal’s favourite sweets—misthti doi and rosogulla.

Mittal-Saraf alliance in Mumbai
When Natasha Mittal (Lakshmi Mittal’s brother Vinod’s daughter) got engaged to Varun Saraf (son of construction magnate and Grand Hyatt owner Arun Saraf), Mumbai was looking forward to the Power Wedding of 2010. The wedding was out of the bound for the press, and hence not much is known about the ‘wow’ elements of this wedding, except that it was the classiest and most elegant affair@ Grand Hyatt, Mumbai.

This entry was posted on Friday, May 6th, 2011 at 3:18:54 am and is filed under Celebrity News. You can follow any responses to this entry through the RSS 2.0 feed. Both comments and pings are currently closed.