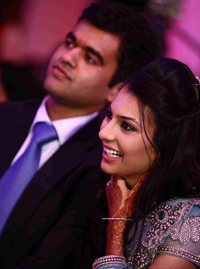 Abhinav and Prerna’s engagement was held over a grand vegetarian lunch at The Oberoi in Kolkata on June 12th, 2011. Of course Tina and Anil Ambani were there and so were many other high profile guests like Union Minister Praful Patel, stock market guru Rakesh Jhunjhunwala and Bollywood’s Vidhu Vinod Chopra.

Prerna is a graduate of New York University, and was working in her father’s business. Abhinav, a Berkeley graduate works in Singapore.

This entry was posted on Friday, January 27th, 2012 at 2:34:56 am and is filed under Celebrity News. You can follow any responses to this entry through the RSS 2.0 feed. Both comments and pings are currently closed.