Was 2018 the year of larger-than-life celebrity weddings? Yes! From film stars to business czars, popular names from across the world got married privately and publicly. Their gorgeous photos had us scrolling all social media channels feverishly through the year, with the last three months especially packed with uber starry nuptials (#DeepVeer, #NickYanka, and #AmbaniPiramal) that could all safely win the tag of #WeddingOfTheYear! We leave it to you to decide which wedding earns that tag as you browse through the celebrity couples who stepped into matrimony this year!

The cross-cultural wedding of two of the biggest names from the world of showbiz encompassing movies, music, and television, was bound to be a hyped affair. Sure enough, the #Nickyanka nuptials had everyone across the world caught up in its frenzy. The two celebrated this milestone occasion in Jodhpur with 225 of their guests over four days of festivities including a vibrant mehndi, a lavish sangeet, a Hindu wedding ceremony, and a white wedding. 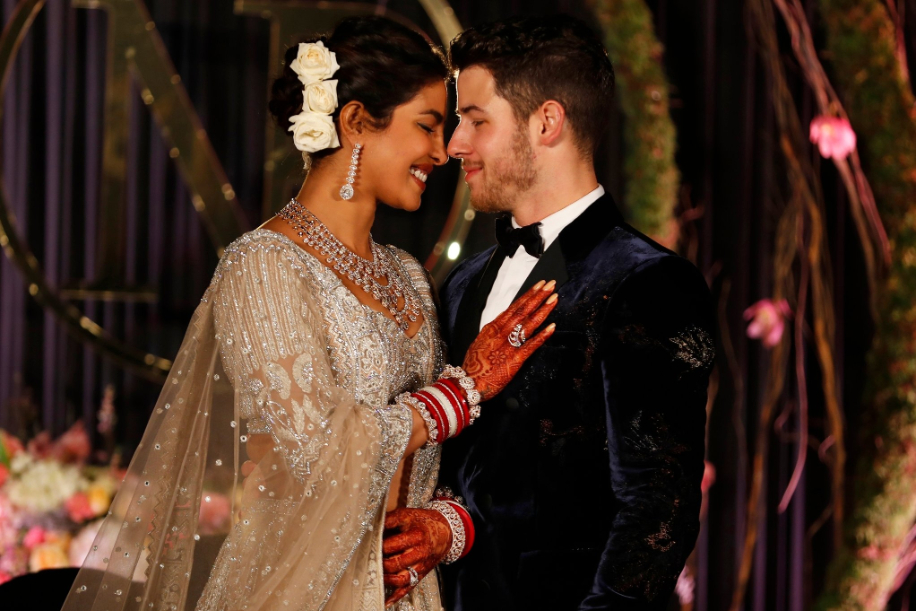 Bollywood’s most successful and popular couple, Ranveer Singh and Deepika Padukone tied the knot in the picturesque location of Lake Como in Italy after months of speculations. While the wedding ceremony included Konkani and Sindhi rituals, their receptions in Bangalore and Mumbai was marked by revelry. The couple’s matching Sabyasachi outfits, the luxurious venues, beautiful traditions and the tangible chemistry of the couple came together to make this celebration one of the most memorable of the year so far. 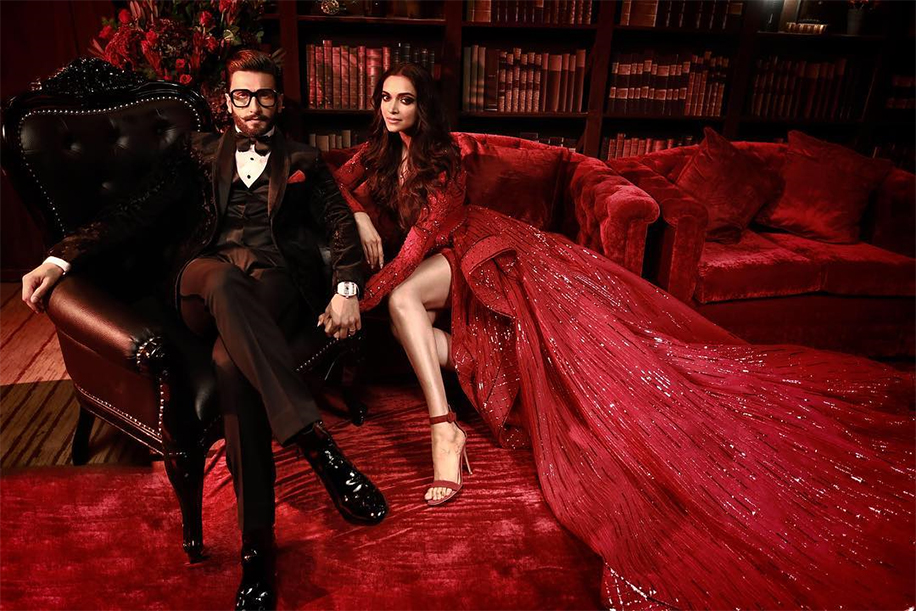 Starting with an evocative proposal at a temple in Mahabaleshwar to the pre-wedding functions in Udaipur and the grand nuptials at their luxurious Mumbai abode, Antilia, Isha and Anand’s wedding was a lavish affair. From the private Beyoncé concert to practically the whole of Bollywood shaking a leg at the sangeet, this wedding was the gala of the year. 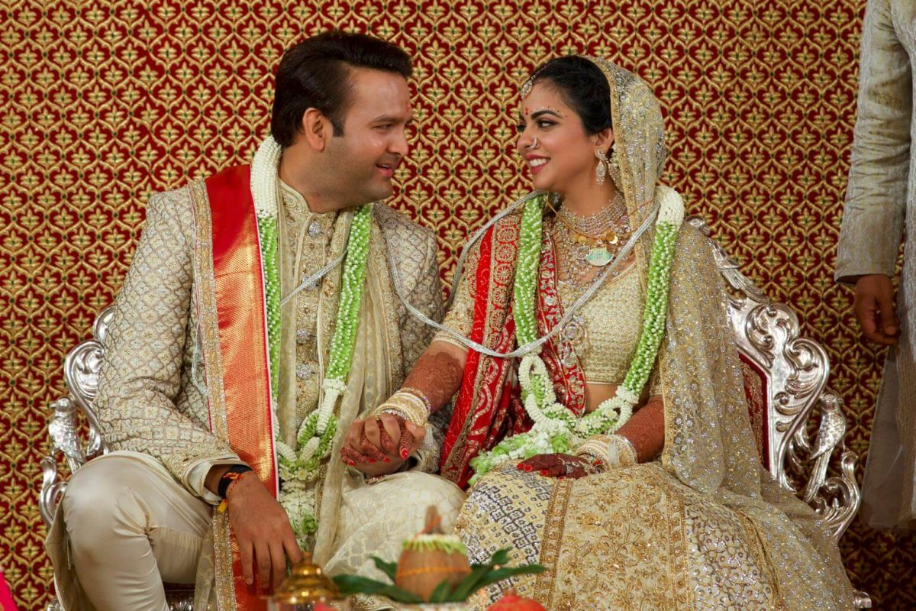 One of the most anticipated weddings of the year finally took place in May as US television actress, Meghan Markle married Prince Harry in a historic royal wedding. The wedding ceremony was enriched by the bride’s heritage and marked the beginning of a new, more modern era in the royal family. 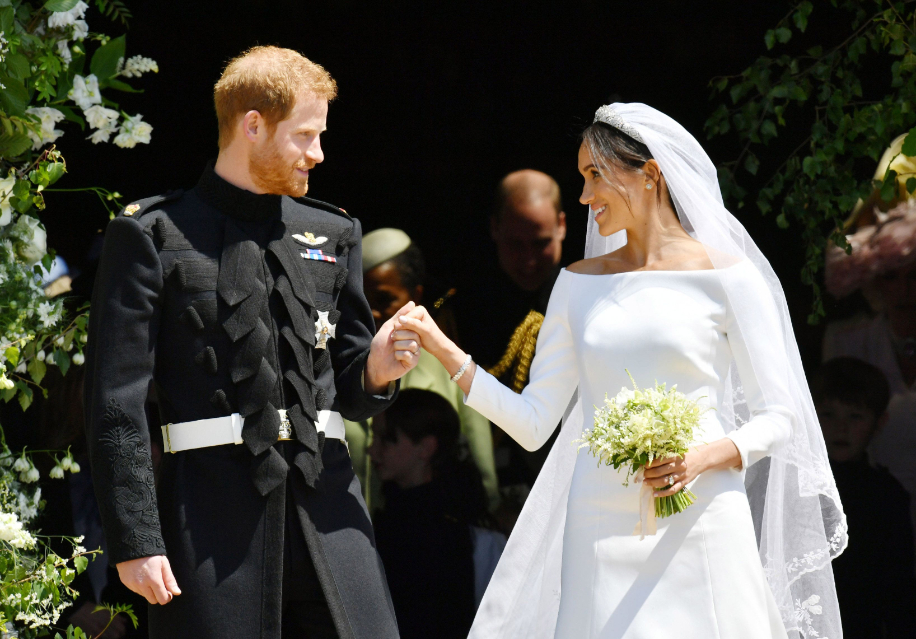 The wedding of Bollywood actress Sonam Kapoor to businessman Anand Ahuja was a classy affair as the edgy star, and bonafide fashionista impressed all with her haute yet homely wedding in Mumbai. While their mehndi exuded grandeur, the reception made for a star-studded event that was attended by the who’s who of the film and sports fraternities. 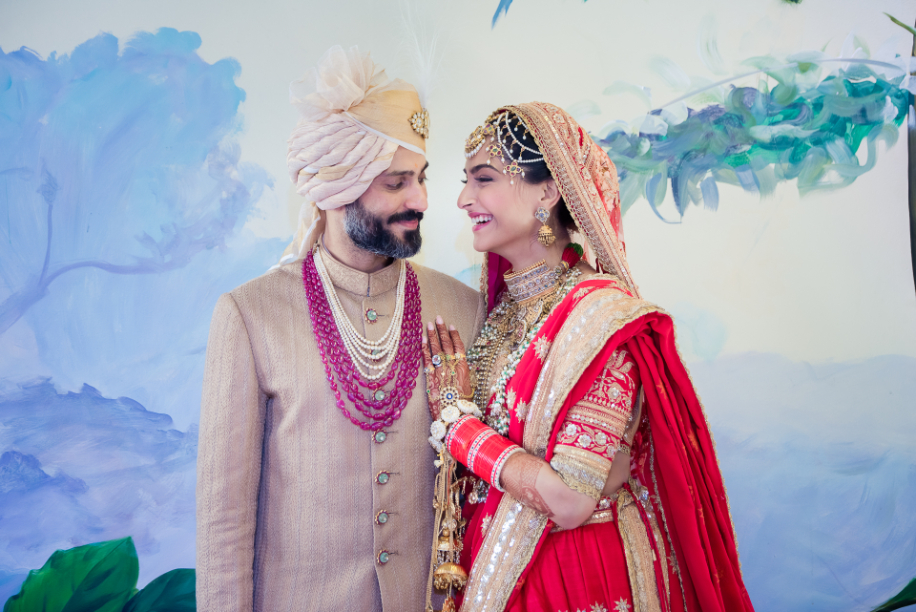 Walking down the aisle moments after saying their vows, ‘The Big Bang Theory’ star Kaley Cuoco and Karl Cook looked happier than ever. The couple tied the knot in an intimate wedding ceremony at a horse stable near San Diego, California. 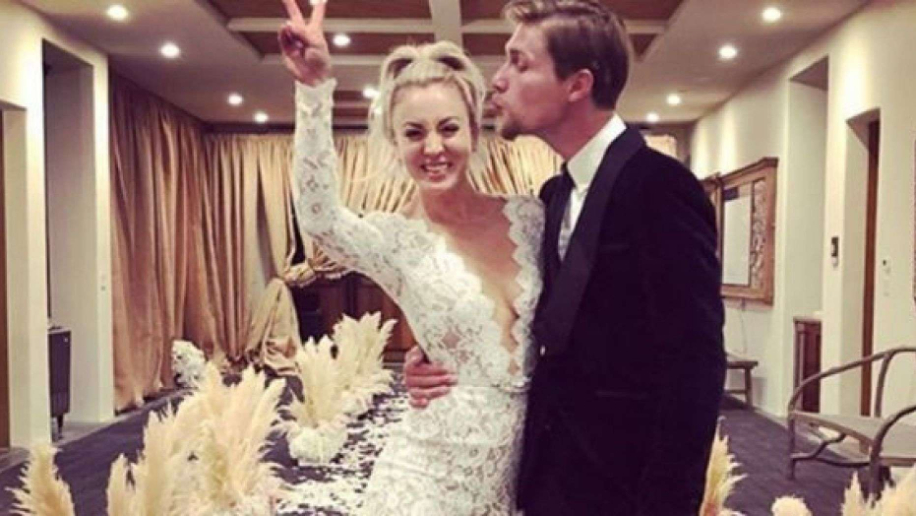 This long-awaited wedding turned out to be a ‘Game of Thrones’ reunion in Scotland as co-stars Kit Harington and Rose Leslie tied the knot in a romantic ceremony at the Kirkton of Rayne church in Scotland. The couple who played on-screen lovers Jon Snow and Ygritte – met on the fantasy show in 2012 and while Jon Snow may know nothing, Kit and Rose sure do know a thing or two about love. 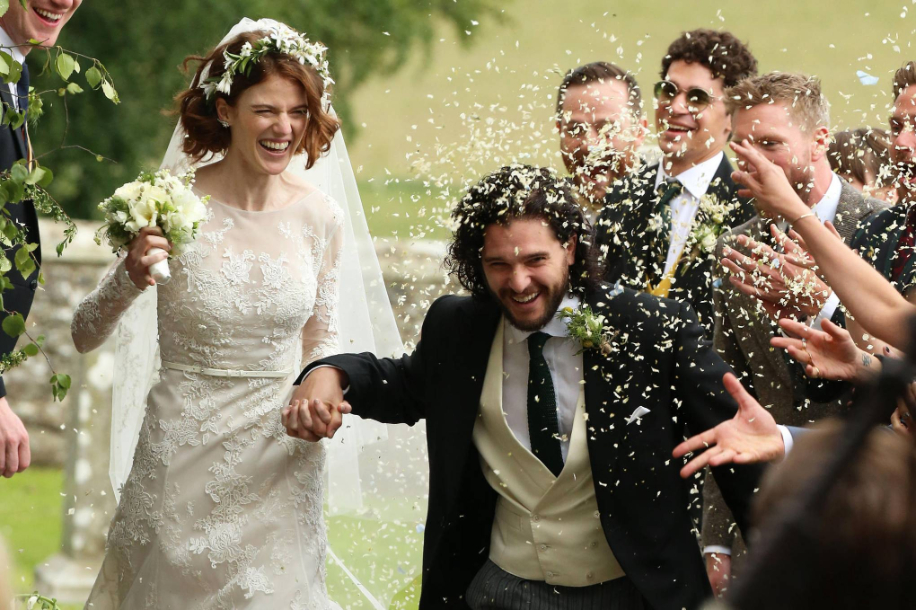 Bollywood actress and talk show host Neha Dhupia tied the knot with actor Angad Bedi in a hush-hush ceremony in a gurudwara in New Delhi. We loved how the bride looked enchanting in a pastel pink lehenga by Anita Dongre with coral pink and mint embroidery and gota work. 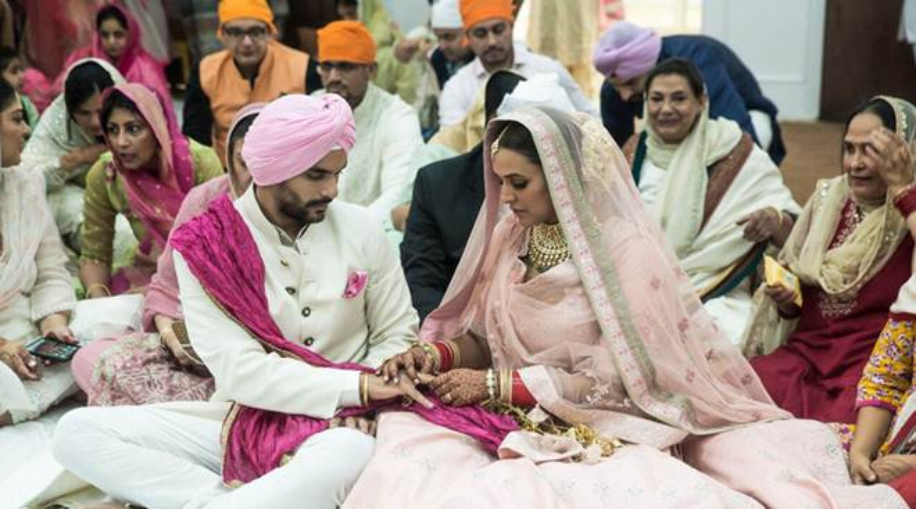 When the world heard about Milind Soman dating a much younger Ankita Konwar the news was received with much skepticism. After going steady for over two years, the couple wed in an intimate ceremony in Alibaug. Actor Mohit Marwah from the film ‘Fugly’ tied the knot with his long-term girlfriend and celebrity stylist Antara Motiwala in a grand ceremony in Ras al-Khaimah, UAE. We loved how the bride explored the power of pink through her wedding functions with decor elements in shades of candy pink. A real-life, royal fairytale, the wedding of Princess Eugenie and Jack Brooksbank was as dreamy as you can imagine! From eschewing the usual veil, the untraditional flavor of the cake to the design of the gown highlighting the Princess’ scar from her surgery, Princess Eugenie made headlines for the subtle ways she broke royal traditions. Victoria’s Secret model Shanina Shaik married musician DJ Gregory “DJ Ruckus” Andrews in the island of Eleuthera in the Bahamas. The couple tied the knot on the exact stretch of sand where they got engaged, and it was all island aura and bohemian vibes at this wedding. While many speculated about the relationship between actor and writer, Sumeet Vyas and the ‘Mere Angane Mein’ actress, Ekta Kaul, the lovebirds kept mum and surprised us all with their wedding! From the happy faces at the haldi to the bright and floral mehndi, everything about their wedding in Jammu was picture perfect. Actress Shweta Tripathi tied the knot with her longtime boyfriend, actor-rapper Chaitanya Sharma in Goa. They kept their fans updated on Instagram and while there were several pictures that the two shared, the most endearing highlights of this wedding were the videos of the couple dancing at their pre-wedding celebrations. The ‘Million Dollar Baby’ star married entrepreneur Philip Schneider and their wedding featured a remarkable sketch of the redwoods. The nature-loving couple included the charm and aroma of Earth’s bounty at their wedding as they walked hand-in-hand towards their romantically lit reception in a rustic 100-year-old barn. The stunning Malayalam actress Bhavana Menon looked nothing less than a royal princess in the traditional avatar at her Kerala-style wedding to longtime boyfriend and Kannada film producer Naveen. The wedding was attended by close family, friends and the couple’s industry colleagues. Popularly known for her successful career in the Telugu film industry, Swathi Reddy tied the knot with her longtime beau Vikas in a very private function in Hyderabad. They tied the knot in a traditional ‘Teluginti Pelli’ ceremony devoid of any filmy shenanigans, and the guest list included only family members, close relatives, and a few friends from the film industry. Chiara Ferragni, one of the world’s most popular and highest paid fashion bloggers, tied the knot with Fedez, an Italian rapper in Italy. While she has set some style trends, her wedding has raised the bar much higher when it comes to modern fairytale weddings. The enchanting setting where the celebrity couple exchanged vows was heady with a floral profusion of pretty blooms and the smoke bombs that went off during the event. Hosted in the heart of an ancient fortress, Pankhuri and Gautam‘s wedding was an exquisite affair that was marked by beauty, splendor and memorable moments. As the pictures of their nuptials flooded the internet, we were stunned by how beautiful the bride looked on her big day. A white wedding by the beach is just what Rochelle and Keith wanted, and their nuptials in Mahabalipuram unfolded like a dream. The duo wed in an intimate ceremony at Mahabalipuram against the backdrop of the blue ocean. With a beautiful couple and breathtaking vistas, needless to say, the ceremony was picture perfect. An ode to their long friendship and inevitable romance, Nicole and Luke’s fairytale wedding in New Zealand was an intimate affair. The couple made sure their wedding aesthetics complemented the location’s natural surroundings by using materials like timber furniture, grass floors, and an abundance of flowers styled to look like they were growing from the earth or spilling onto the floor. Rubina Dilaik and Abhinav Shukla’s extraordinary ceremony in the quaint hill town of Shimla was nothing short of a fairytale. We love how the couple chose the Woodville Palace Hotel as the venue. It is the former summer residence of the Raja Rana of Jubbal, a pre-independence kingdom of the Simla Hill States; The venue added historic significance and character to the ceremony’s various functions. Sandeep Khosla’s niece Saudamini tied the knot with Siddharth in a star-studded affair that witnessed sizzling performances by some of Bollywood’s best! While we were mesmerized by the celeb’s dazzling appearances, some inside videos of their dance performances are not to be missed! Yuvika Chaudhary and Prince Narula‘s wedding celebrations in Mumbai were a heady mix of fun festivities and fashionable looks. Among the many romantic gestures that came under the media, the spotlight was Prince getting Yuvika’s name tattooed on his back and adding her name to his. The groom is now called ‘Prince Yuvika Narula.’ This entry was posted on Thursday, December 20th, 2018 at 5:13:03 pm and is filed under Celebrity News. You can follow any responses to this entry through the RSS 2.0 feed. Both comments and pings are currently closed.