Wedding photographers have an inside view of almost everything – the drama, dancing, emotions, excitement, laughter and all the loveliness of decor and dresses – that is part of any wedding. For ladies behind the lens, there’s always a favorite photo or two from the thousands that they have captured at weddings over the years. We asked some leading women photographers to share some of their special shots with us, and you can check them out below.

Aayushi & Kanishka – The Wedding Salad
Weddings are events where no one is ever judged for being emotional or vulnerable. This candid photo reflects the feelings that all parents have when their children get married and enter a new phase of their lives. To be privy to such a moment is a special privilege that is accorded to wedding photographers and here, The Wedding Salad captures the significant moment poignantly. 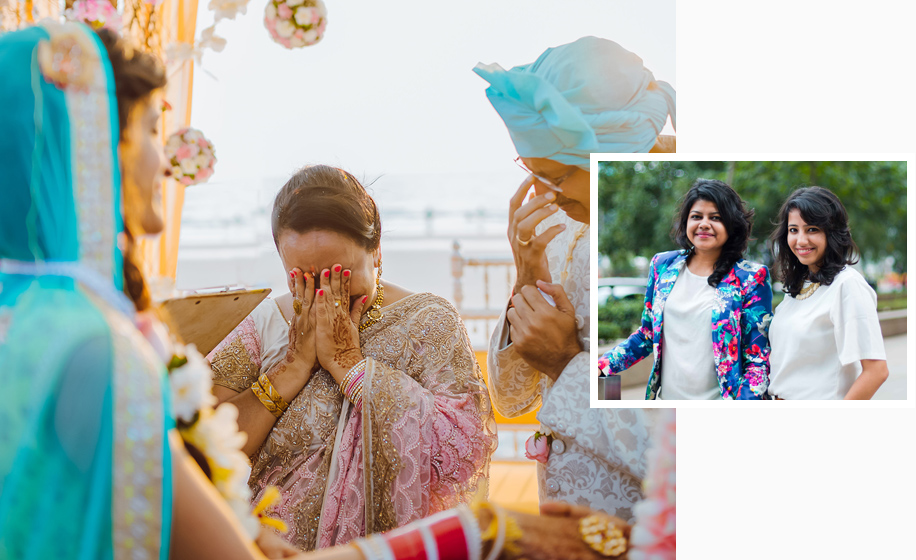 Aditi Varma, Photosynthesis by Aditi
This bride caught in an unguarded moment as she poses in the middle of an elaborate frieze window makes for a regal and charming frame. It exudes the essence of a modern-day princess waiting for the magic of marriage to unfold. Ankita Asthana – WeddingNama
Amid the chaos of the haldi ceremony, the groom’s family surprises the bride by pouring a bucket of cold water on her. To be able to capture the exact moment when the bride reacted is the reason why this photo is close to the photographer’s heart. 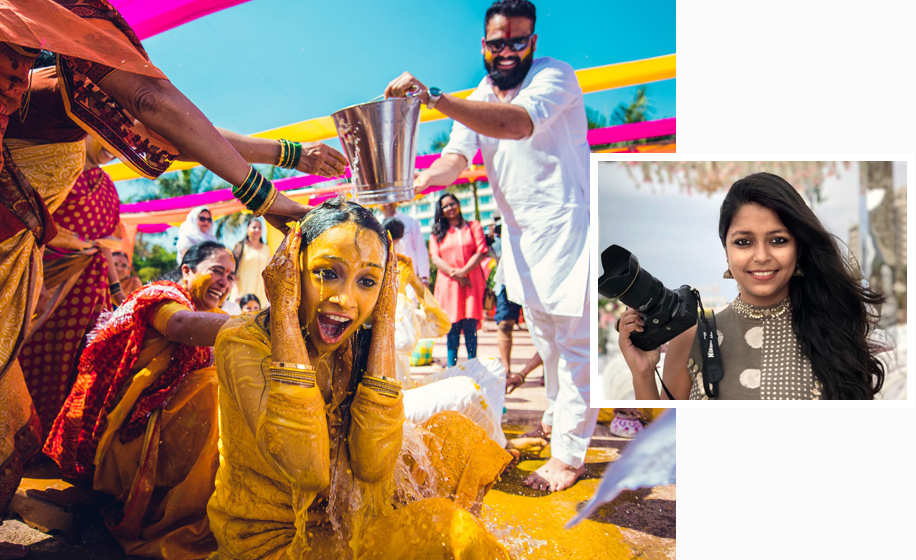 Deepanshi, HappyFrames
The exquisite peacock feathers backdrop of the setting adds a regal vibe to this image which shows a couple sharing a sweet moment by posing together. The contrast between the rich royal blue backdrop and the pastel shades of the couple’s ensembles makes for a compelling frame. 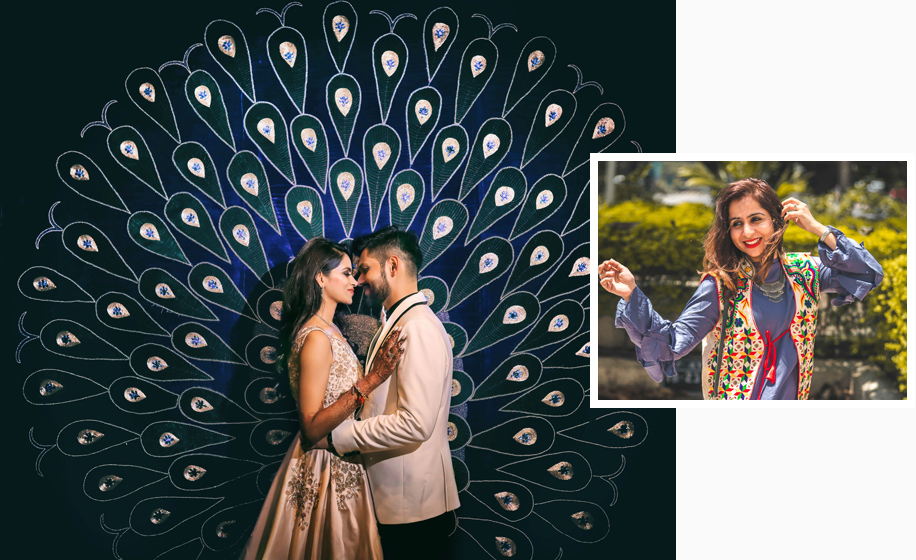 Ekta Rekhi, Sam & Ekta
This photo may be black and white, but one can almost feel the spectrum of colors in this shot – the glitter of the fireworks that look like clusters of stars in the darkness, the sunny smile of bride Antara, the cool vibe of groom Mohit Marwah, and the elegance of the charming frame behind them. 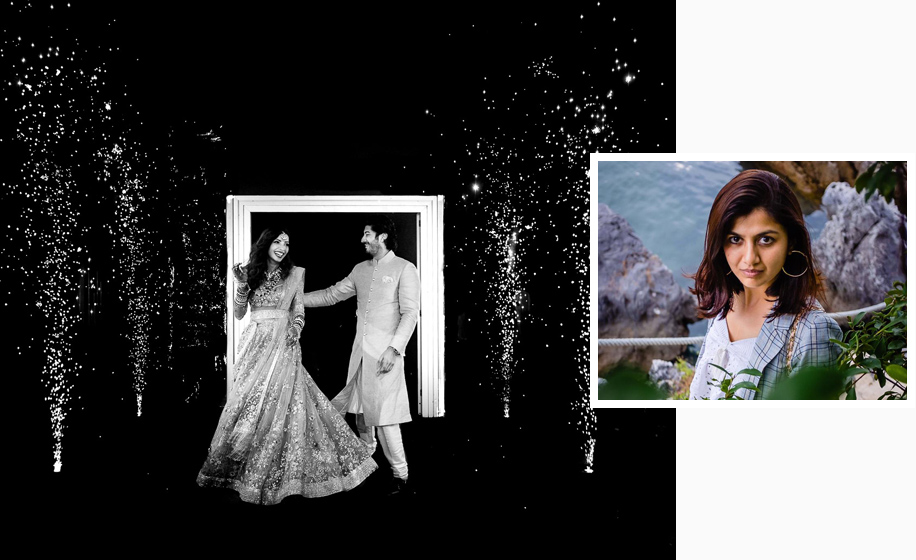 Hera Rasool, We Don’t Say Cheese
An inspiring love story behind this photo is what sets it apart from the rest. Samina was battling depression when her knight in shining armor, Shahzeb stepped in and helped her through it all. The cheery yellows and bright smiles captured here are an affirmation of positivity, faith, and love. 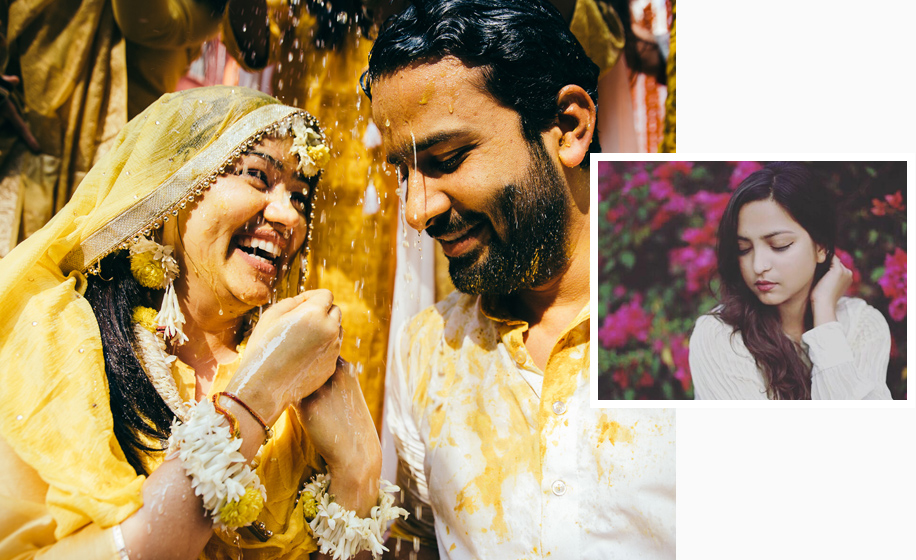 Jhalak – Shades Photography
The grey canvas of this photo shot on a lake cannot mask the warmth the couple share as they enjoy a romantic moment together on a boat. This graceful composition of this image evokes the aura of a retro romance unfolding unhurriedly. 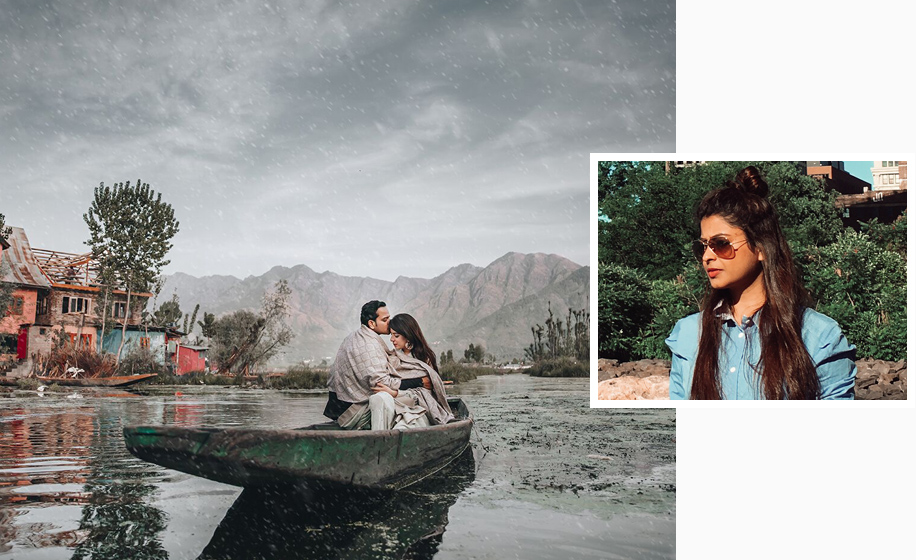 Joanne, D’silva Films
Joanne has documented many cross-cultural weddings, and she captures the subtle nuances of such occasions with a sharp eye. This image of a Caucasian bride with henna on her hands and the Indian groom in a Western suit symbolizes how both have embraced elements of each other’s cultures beautifully. 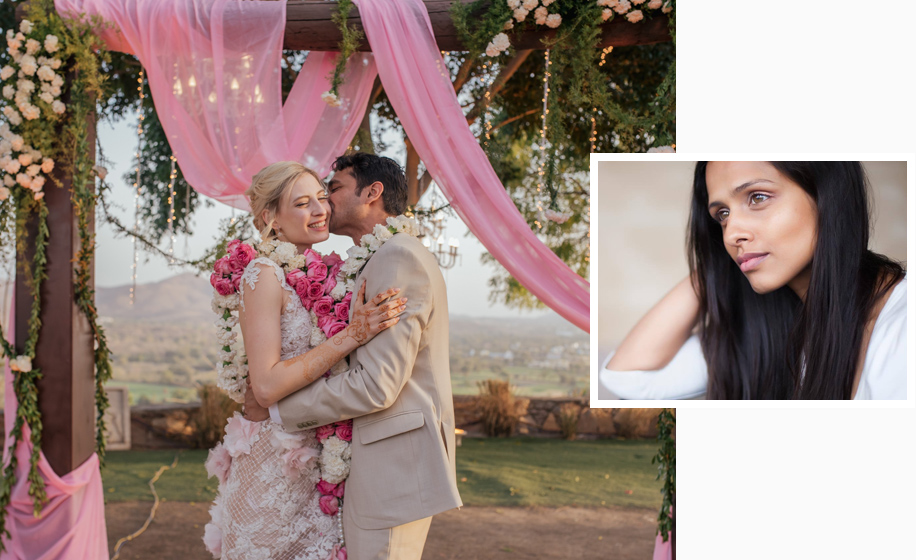 Manasvi Shah, IntoCandid Photography
Three generations in one photo acknowledging an important phase of life make this photo a deeply moving one. From the grandmother getting emotional to bride Mauli holding her hand, it shows the deep connection between the two. Mauli’s mother smiles as she tried to lighten the moment, thereby making this image a relatable tableau that plays out at probably every Indian wedding. 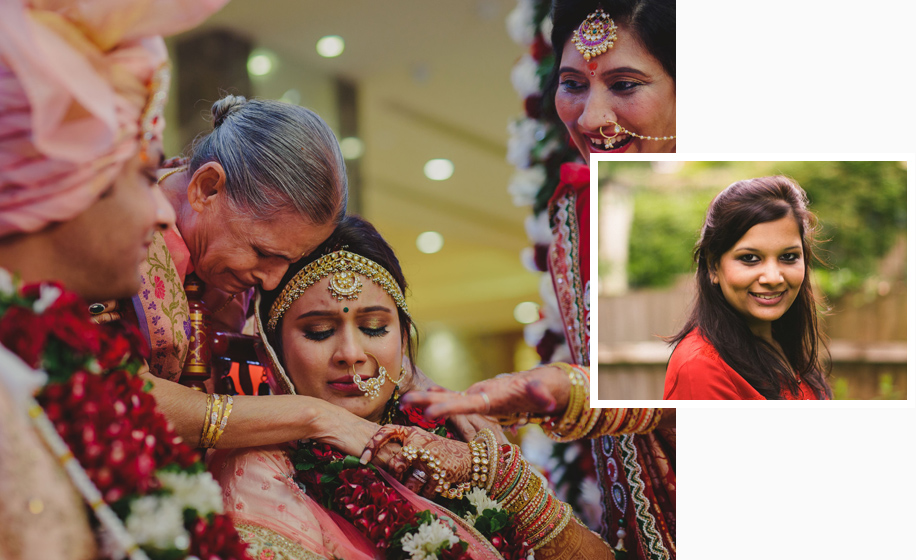 Mehak Chawla- Studio Finesse
With not a single photo of Aditi minus her smile, this shot stood out from the rest. All the mixed feelings in this bride’s heart are camouflaged by her serene aura. 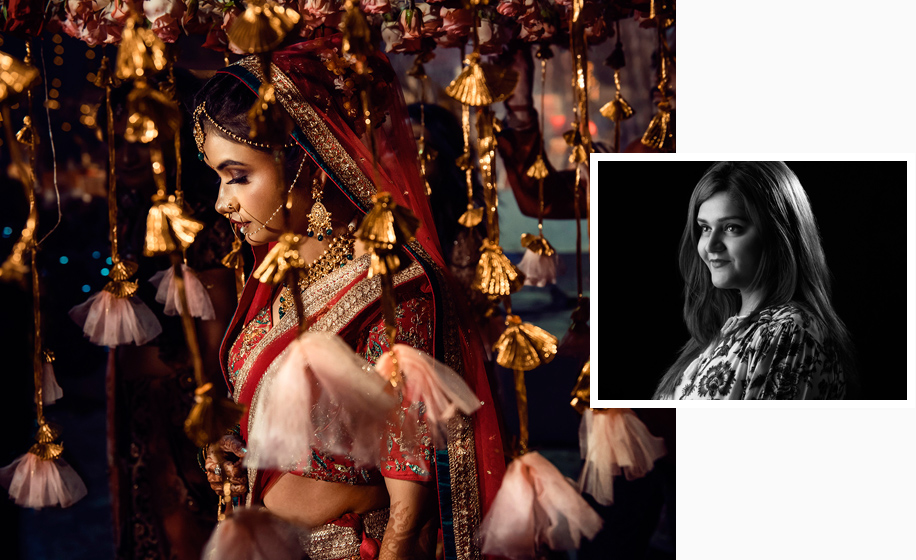 Monisha Ajgaonkar, The Photo Diary
During weddings, the focus is typically on brides and their emotional moments. However, in this start black and white photo, Monisha has captured the bond between a loving mother and her son which makes for a poignant pause in between all the boisterous festivities. Nidhi, Slice of Life Pictures
What goes through a mother’s mind when she sees her daughter getting married? Doctor mother-daughter Isha and Alka’s bond in this photo contains some of the answers – there’s joy, love, attention, maybe a little sadness, and acceptance as a daughter takes on the role of a daughter-in-law. Noopur Mishra, Happy Flashbacks
A black and white photo with an element that defines the source of light, such a beautiful paradox. 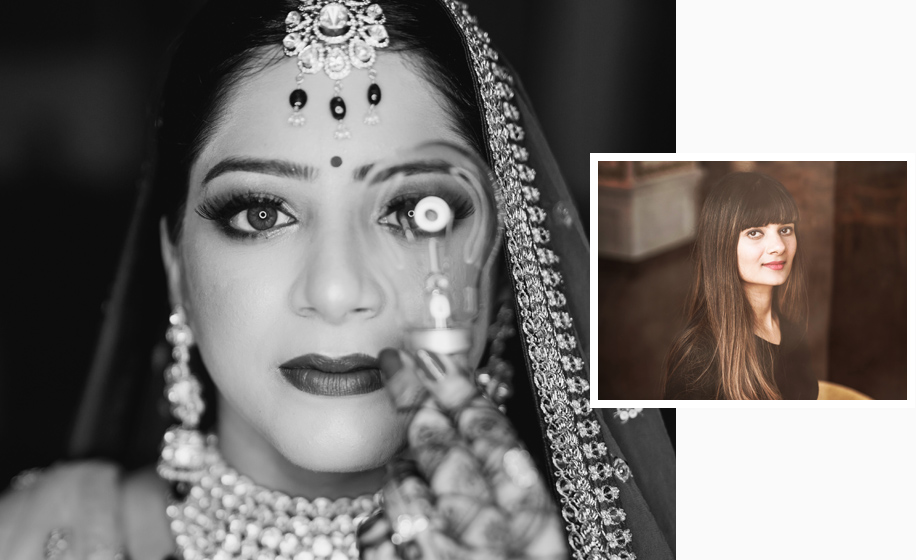 Sakshi, My Visual Artistry
In the streets of Kolkata, Bride Tania’s hands are adorned with bangles made of shells soaked in turmeric water as a part of the Dodhi Mangal ceremony during the Bengali wedding. The bride’s simple yet stunning look makes this photo a special one. Shanaya Arora, Nitin Arora Photography
It may seem like an ordinary image of this beautiful couple, but the sense of peace and sanity that it exudes is one of a kind. 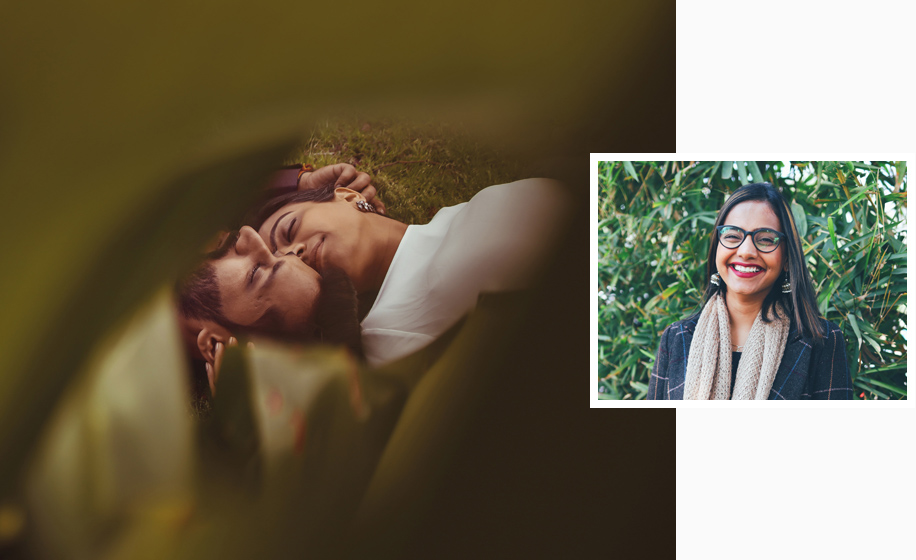 Shreya Sen, Shreya Sen Photography
Somewhere beneath the designer ensembles, glittering jewellery and flawless makeup is a bride whose raw emotions are bubbling under the surface. Sometimes, a feeling expresses itself in tears, and this stunning capture of a bride at her Anand Karaj (Sikh wedding ceremony) with tears rolling down her cheek silently epitomizes the mixed emotions that are as much a part of every bride as her dazzling bling. 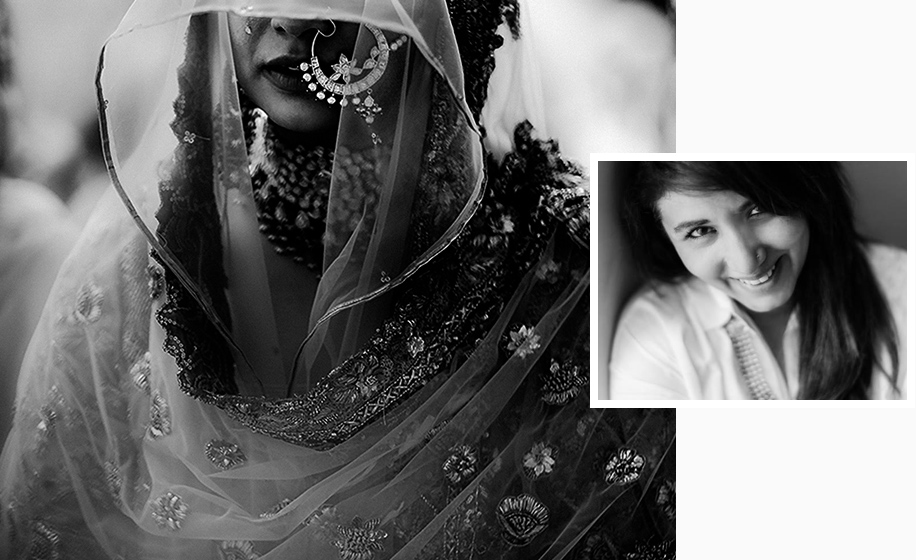 Shweta, The Creative Lens
This photo is close to the photographer’s heart as it represents the history and cultural traditions that are carried forward by women at Indian weddings, which some brides may not always be comfortable with. Sonal Dalmia, Clicks Unlimited Photography
A sense of calm balanced with a depth of intensity is what this photo boasts of and hence is Sonal’s favorite. Suvriti Gupta, Nimitham Wedding Photography
This beaming bride looks like a sunflower blossoming under the loving hands that are applying yellow turmeric paste on her skin at the half ceremony. From the warm tones of the haldi, outfits and floral jewellery to the warm feelings this image invokes in the viewer, this candid capture is probably the radiant highlight of the wedding album. Tripty Guru, Romesh Dhamija Productions
Tripty was a witness to a moment at the end of a Gujarati wedding, where the priest asked Emma to touch husband Ravi’s feet as a mark of respect. She instantly replied, “No, I would rather hug him.” The happiness captured in this photo is tangible! This entry was posted on Friday, September 6th, 2019 at 12:59:38 pm and is filed under Wedding Photography & Films. You can follow any responses to this entry through the RSS 2.0 feed. Both comments and pings are currently closed.