From waist to forehead and ornate arm ornaments, a Sindhi bride's jewellery trousseau is crafted for every aspect of her look.

The Sindhi community is known for its sharp business acumen, lavish living and adherence to strong traditions that are influenced by Hindu and Sufi factors. Spread across the globe, they have made their name in diverse fields and have the affluence and visibility to influence trends in the world of fashion and style. All these traditional and contemporary factors can be seen in their jewellery designs where gold and diamonds reign supreme.

Sindhi brides layer on multiple exquisite pieces with charm and finesse owing to the decades-old traditions that have been passed down the generations. From a dainty nath to a striking maang tikka, one can always count on a modern Sindhi bride to fuse two distinctly different elements in her own unique way.

So, if you’re a Sindhi bride aiming for a traditional look on your big day, here’s a quick jewellery guide to help you put together a stunning collection.

Maang Tikka:
A gem-studded pendant for the forehead, the maang tikka is of prime importance to the Sindhi bride. One of her most standout ornaments, this headgear is usually studded with precious gemstones. Kundan Lambo Sago:
A statement necklace crafted out of precious kundan and paired with a bold locket, the kundan lambo sago is probably the longest necklace in the Sindhi bride’s jewellery box. Nath:
Similar to the Punjabi bride’s nath design, the sindhi nath is also exquisitely simple and comprises a gold hoop and a chain that is hooked in the bride’s hair. However, in some cases, a bride often chooses to amp up their look with a nath that features floral motifs. 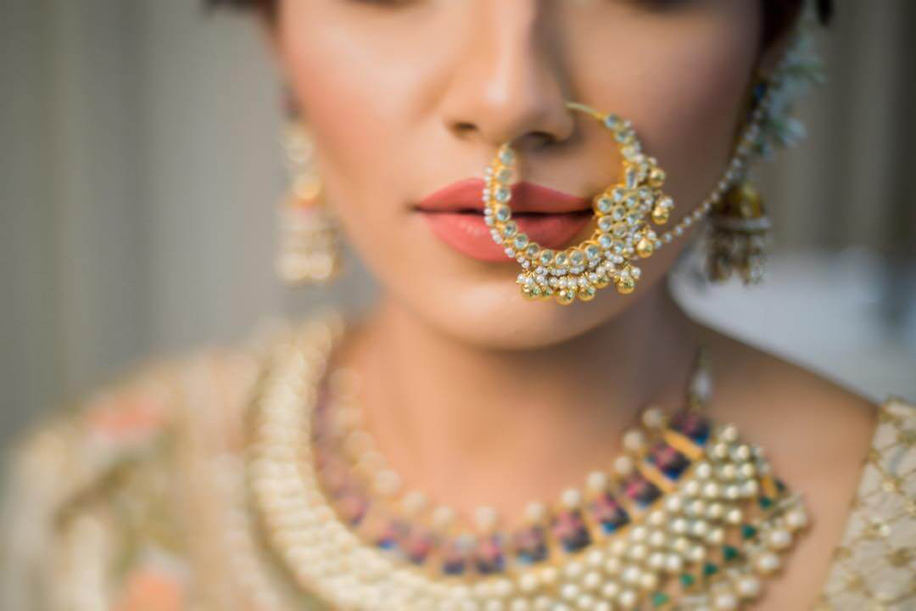 Pouncho:
A gem-studded gold bracelet with a chain and ring that slips onto the fingers, the poncho is a must-have in the Sindhi bride’s jewellery box for the sheer amount of dazzle it adds to her look. Taragdee:
A jeweled waist belt, the taragdee not only emphasizes a bride’s curves, but also helps her manage her heavy lehenga. Crafted out of gold, kundan, and richly hued stones, this impressive accessory continues to be a popular item with modern brides. Chooda:
The pride of every North Indian bride, especially those from the Punjabi community, the chooda is a set of bright red and white/light beige bangles that are worn by the Sindhi bride on her wedding, and for 40 days after the marriage. Dhuri:
A glittering multilayered necklace crafted out of golden beads and featuring gem-encrusted pendants, the dhuri is one of the most extravagant pieces that a Sindhi bride is expected to wear on her wedding day. Payal:
Anklets that tinkle with every step, the humble payal is seldom since it’s typically hidden under the bridal lehenga. However, they find a firm place in her overall look, especially in those stunning feet shots which feature beautiful henna patterns. Gulband:
A gem-studded choker necklace designed with stunning dropstones, the gulband is usually paired up with a longer necklace and can be adjusted according to the bride’s comfort and look. Patti Chooda:
Luxurious bangles studded with one to ten-pointer diamonds, the patti chooda dazzles on the bride’s wrists and reflects every light in the room prettily as she goes about the wedding ceremony.