Wedding season is as much about the bridesmaids as it is about brides. If you’re part of the special sister-squad, you’ll know there are a lot of responsibilities including looking glamorous through the ceremonies and for the photos!

WeddingSutra collaborated with Maybelline New York and talented celebrity makeup artist Elton Fernandez to conjure a series of trendy bridesmaid looks in the season’s prettiest outfits and the most gorgeous makeup to help you shine, as the Knotty Affair documented the looks. 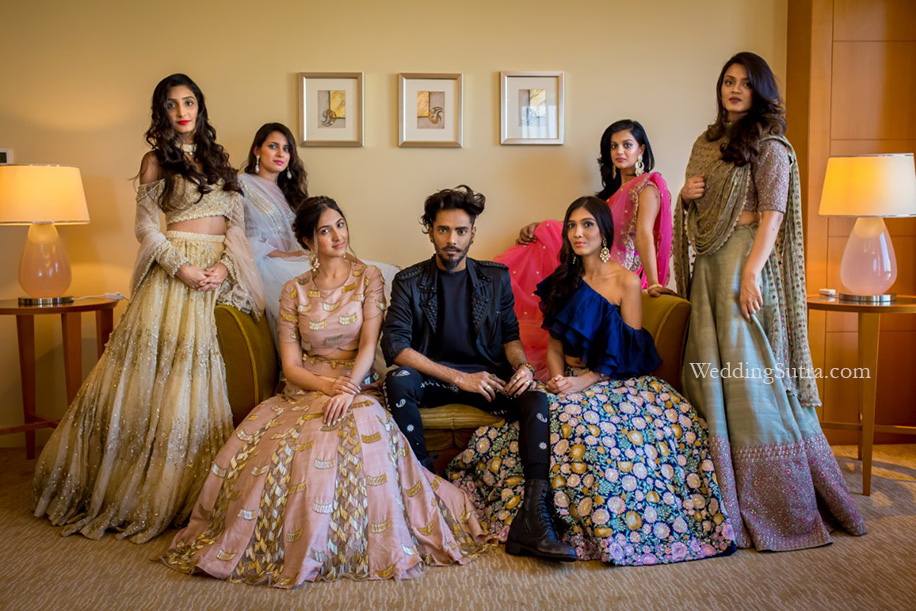 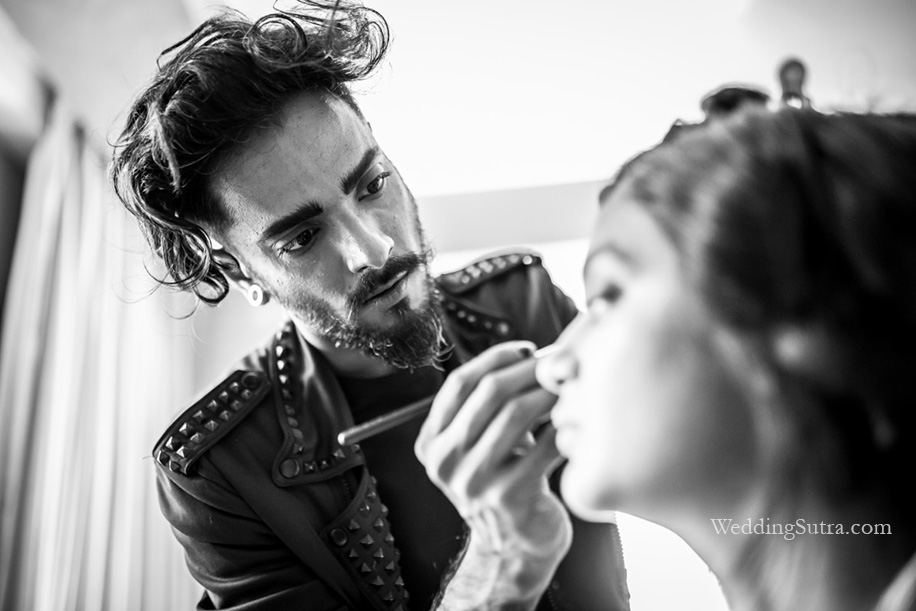 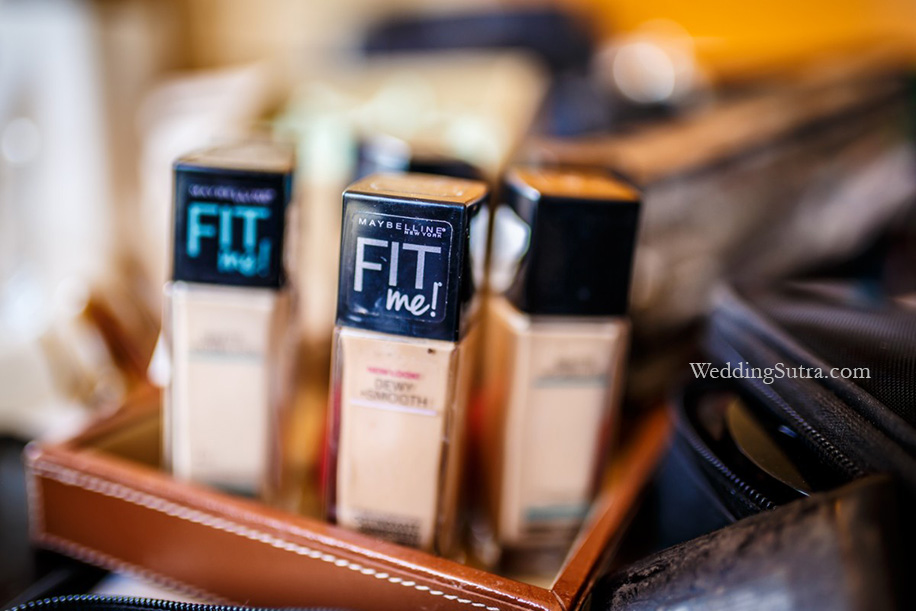 Sunkissed peachy glow for a beachside wedding
Jetting off to an exotic locale for a destination wedding? Think pretty pastels and modern silhouettes. Aalika is gorgeous in a peach lehenga by Payal Singhal for Ensemble and polki earrings.

Elton got her beach ready with a sunkissed peachy glow by prepping her skin with the Dream Cushion Liquid Foundation by Maybelline New York and Master Strobing Stick for a sun-kissed glow. Her bright eyes were accentuated with generous coats of the Maybelline New York Falsies Push Up Drama Mascara. Elton used Brow Pomade Crayon to softly fill the eyebrows and The Blushed Nudes Palette to create a natural, nude eye look. Blending Maybelline New York Color Sensational Creamy Matte in Nude Nuance and Fit Me! Blush in Medium Coral, her lips were set in the perfect pout.

And voila! Aalika is a trend-setting destination wedding beauty ready for those dreamy beachfront photos! 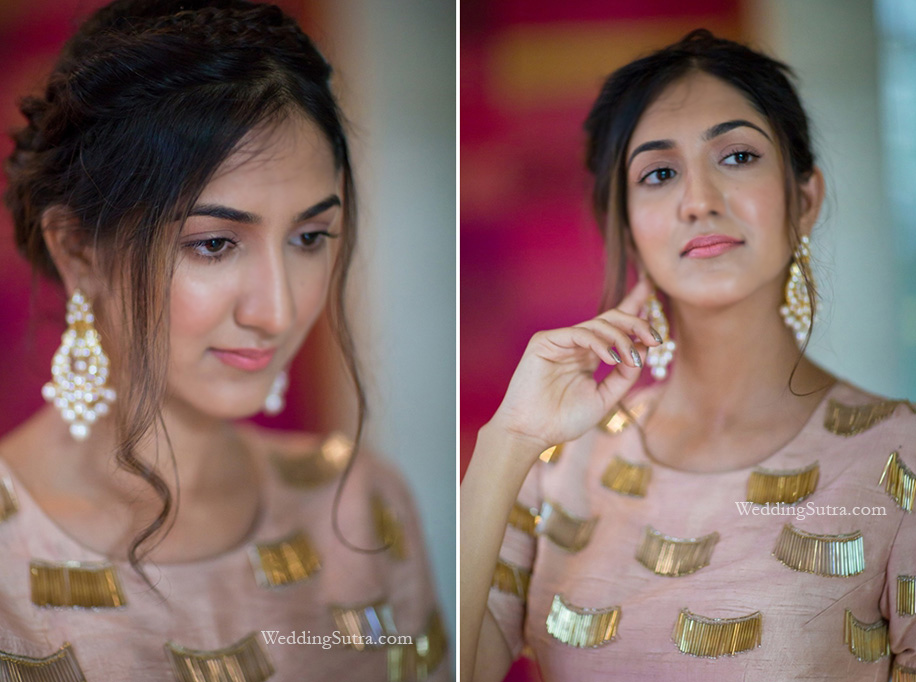 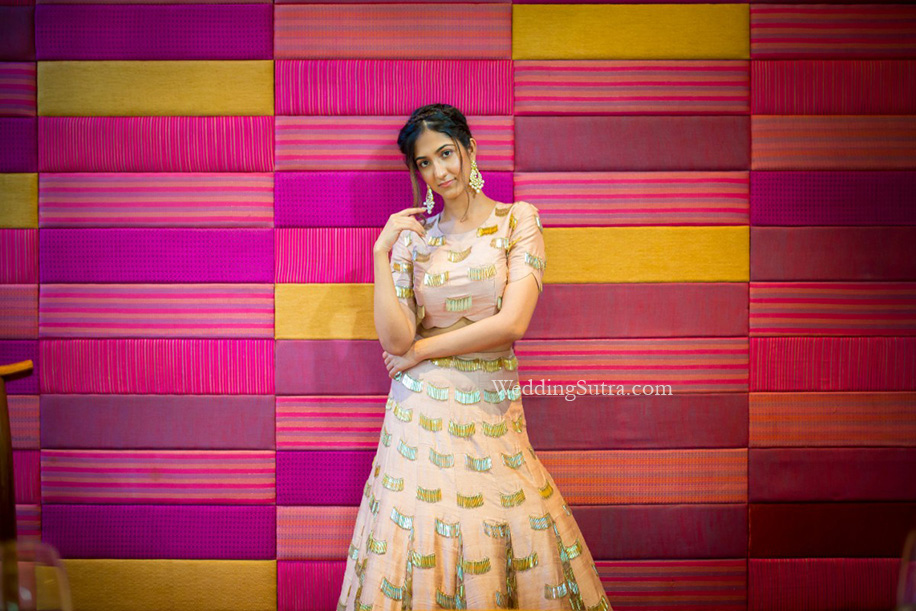 Understanted elegance with Winged Eyes and Plum lips for a mehndi
We are crushing on this color! This beautiful shade of earth and jewel green is perfect to rock your bestie’s mehndi. Take cue from Mitali in this SVA lehenga, accessorized with polki, green-stone and pearl danglers from 7th Avenue Jewellery.

Mitali wanted understated elegance and hence Elton decided to give her winged eyes and plum lips. He started off with the Maybelline New York Dream Satin Skin Foundation and V Face Studio Duo Contouring Stick that evenly blends into the skin. The Maybelline New York Fit Me! Blush enhanced Mitali’s skin with a pop of natural color. To highlight her eyes, Elton used the Colossal Super Black Kajal and gave her gorgeous winged eyes. He paid special attention to Mitali’s lashes by applying a couple of coats of the Lash Sensational Mascara. Filling the eyebrows softly with Fashion Brow Duo Shaper and blending two tones from The 24K Nudes Palette for her eyes, Elton finished the look with a bold plum pout with Maybelline New York Color Sensational The Loaded Bolds Lipstick in Chocoholic.

Result! Mitali is a green goddess in waiting. 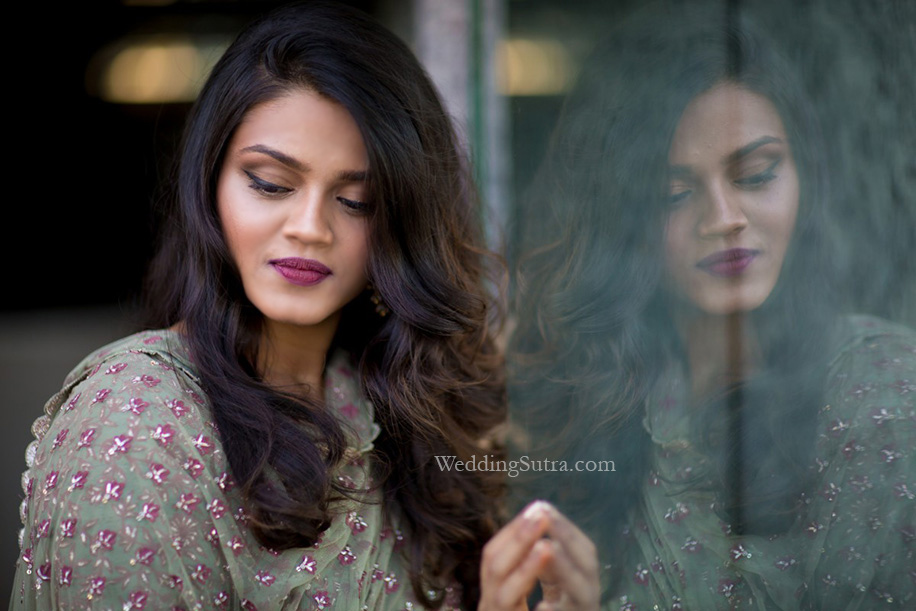 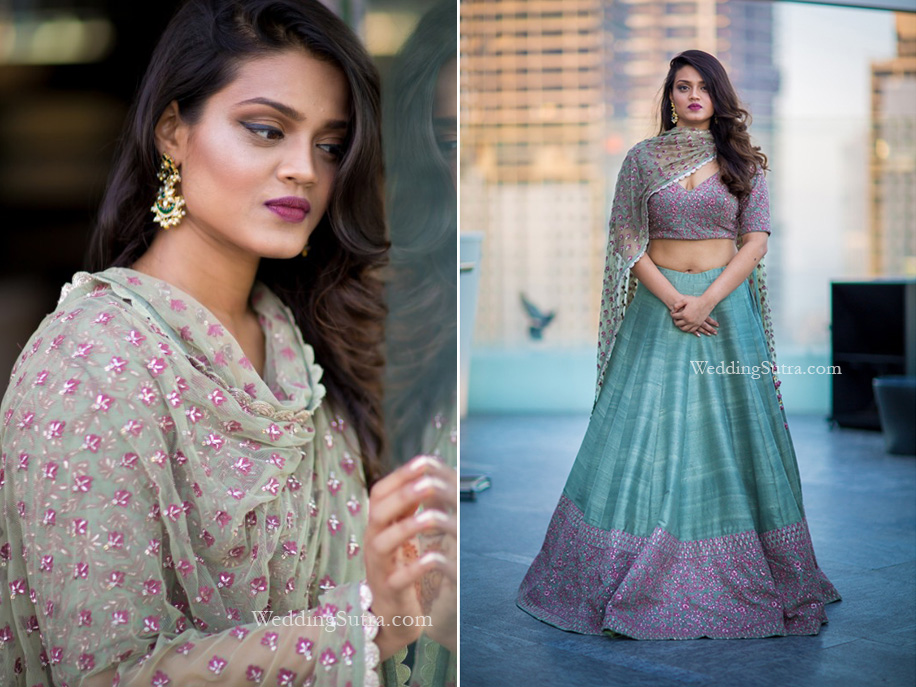 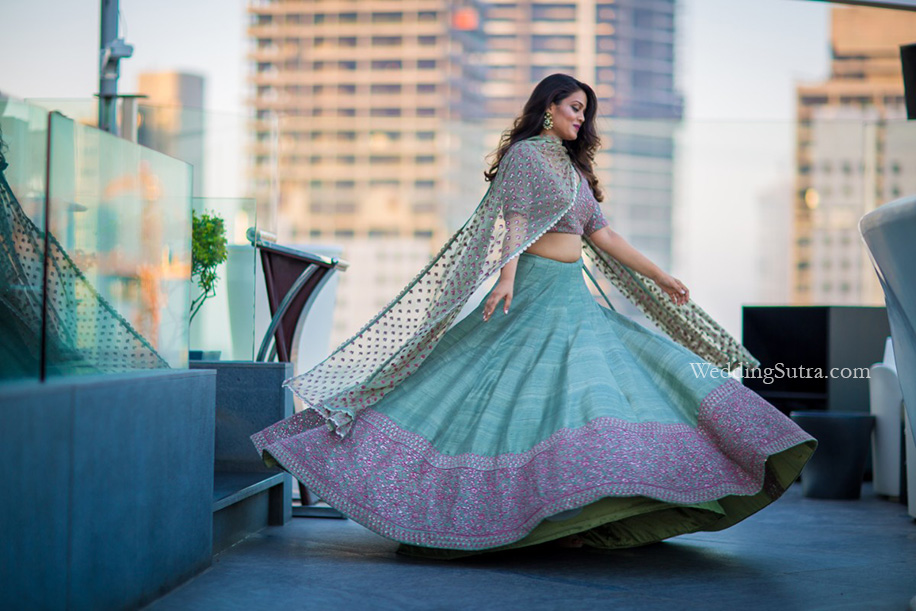 Glamorous Smokey eyes and Pink Lips for your sibling’s pheras
This luxurious pink and orange lehenga by Anushree Reddy for Ensemble is a mesmerizing creation perfect for the wedding ceremony of your own sibling. Though bold and glamorous, this lehenga still won’t take the spotlight away from the bride.

To go with the glam, Elton used the latest Maybelline New York products to give Noopur smokey eyes and pink lips. He started with the Dream Cushion Foundation on Noopur’s flawless skin. The base was set with a gentle touch of the Master Strobing Cream in Nude. Elton then applied a gorgeous shade from The 24K Nudes Palette to prepare the base for smokey eyes. He accentuated them with Hyper Ink Liner and Colossal Super Black Kajal and applied Lash Sensational Mascara for extra dimension. Elton finished the look with a luscious pink pout by painting her lips with Maybelline New York Color Sensational The Loaded Bolds Lipstick in Fierce Fuchsia.

Noopur looks like she’s dreaming of a wedding of her own. 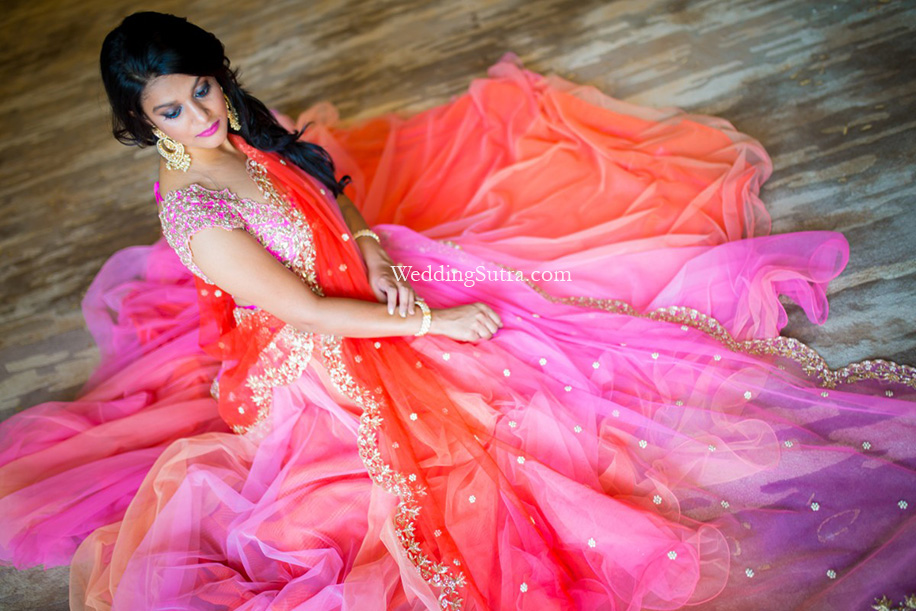 Peacock eyed look for a royal reception
Jayati channeled an elegant princess in a beautiful pale blue lehenga by Dilnaz Karbhary – perfect for a night of mingling and dining at a wedding reception.

For this Grace Kelly-inspired reception look, Elton started with the feather-light Dream Cushion Foundation that softly blends into the skin, and set it with Fit Me! Blush. On the eyes, Elton decided to give her a unique peacock eyed look and combined two different colors of Lasting Drama Gel Pencil – Emerald Green and Turquoise and applied it generously on her waterline and upper lash line and brushed on a few strokes on her eyelid. He paid special attention to her lashes by applying couple of coats of Falsies Push Up Drama Mascara for more definition. Jayati’s look was finished with a subtle pink pout with Maybelline New York Baby Lips Candy Wow in Raspberry. 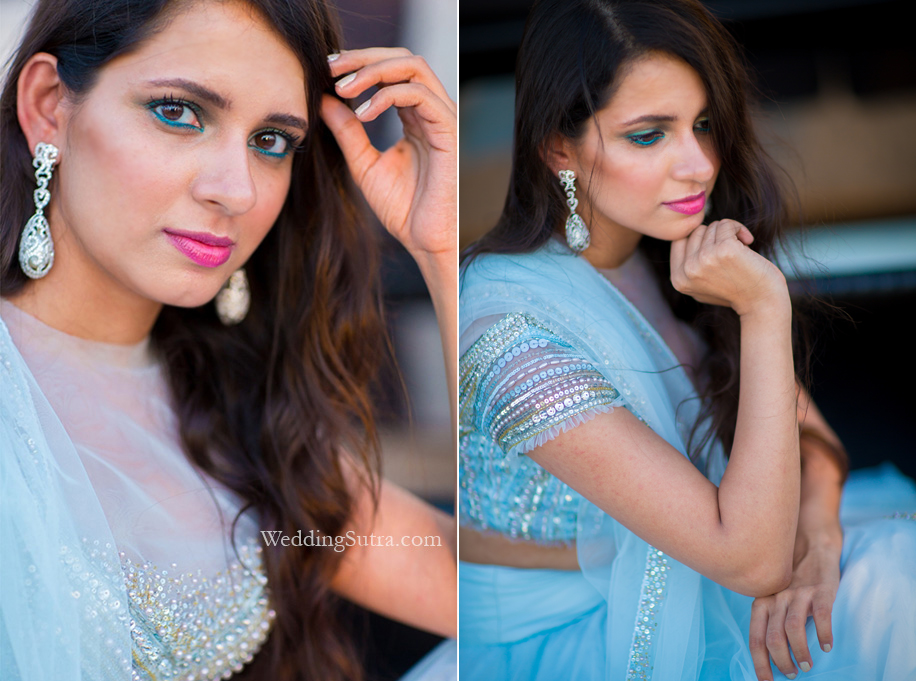 Colorblocked Eyelids for a wedding cocktail
Surbhi is all avant-garde gorgeous in a floral applique lehenga skirt and blue bolero blouse by Manish Malhotra for Ensemble and statement earrings from Jaipur Gems.

Elton decided to let the eyes do the talking and added drama with color-blocked eyelids. He began with the Maybelline New York Fit Me! Foundation and a quick stroke of Fit Me! Concealer for a flawless base. A touch of blush and highlight from Master Contour Blush Palette helped shape, define, and highlight the face for fool proof contouring. A tad bit of drama was added by a color-blocking effect with Hyper Glossy Liquid Liner in Blue and Lasting Drama Gel Pencil – Lustrous Sapphire on her eyelids. Her eyes were accentuated with generous coats of Maybelline New York Falsies Push Up Drama Mascara. The red-carpet ready cocktail look was completed with a touch of the gorgeous Color Sensational Lip Color in Romantic Rose.

This is how you bring your celebrity A-game and show off your edgy chic at the wedding cocktail. Ethereal Bronzed eyes and Bold Lips for a wedding sangeet
Be the life of the party in something ethereal and romantic that is also comfortable to dance in. Esha looked resplendent in a beige Natasha Dalal lehenga and choli with cutout shoulders and a stunning polki set from 7th Avenue Jewellery.

To keep the look ethereal, the make-up was subtle yet stunning with a subtle glow and a bold lip. Elton started with Maybelline New York Fit Me! Matte + Poreless Foundation on Esha’s flawless skin. The base was set with a gentle touch of Fit Me! Concealer and Master Strobing Cream to give her a skin a subtle glow. He then brought a touch of warmth with the Master Contour Blush Palette. To accentuate her eyes, he gave a bronzed effect with the The 24K Nudes Palette, lined them with Hyper Sharp Liner and applied Falsies Push Up Drama Mascara for an extra dimension to her eyes. Elton finished with a bold red pout with Maybelline New York Loaded Bolds lipstick in Dynamite Red to complete the bridal look to perfection. 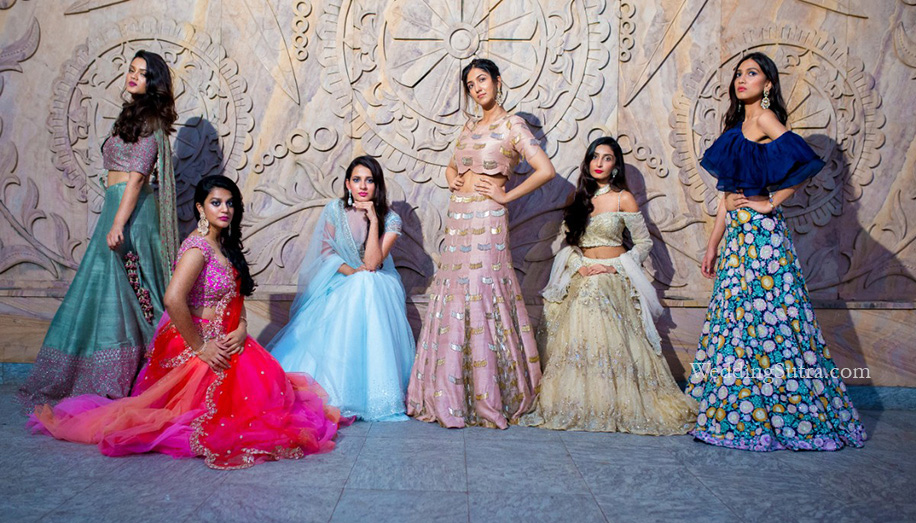