Aasif and Shaifali’s fairytale wedding was a night of multicultural celebration.

Correspondent for The Daily Show and popular American actor Aasif Mandvi tied the knot with Shaifali Puri, CEO of the Uplift, an anti-poverty nonprofit on Fox Theater’s famous stage, in front of 220 of their closest friends and family. The ceremony was a blended Indian interfaith wedding since Shaifali’s family is Hindu and Aasif’s is Muslim. The couple worked with designer Jim White of Jim White Designs and planner Sonal Shah of SJS Events to create a space that captured the color, vibrancy, and festive nature of Indian weddings. The wedding was interfaith, embracing both of the newlywed’s backgrounds. “We included elements of our Indian Hindu and Muslim cultures in every single aspect of our wedding,” said Mandvi who also stars as Jay Malick on TV show Younger. “From the ceremony, to the food, to the music, to the clothes.” 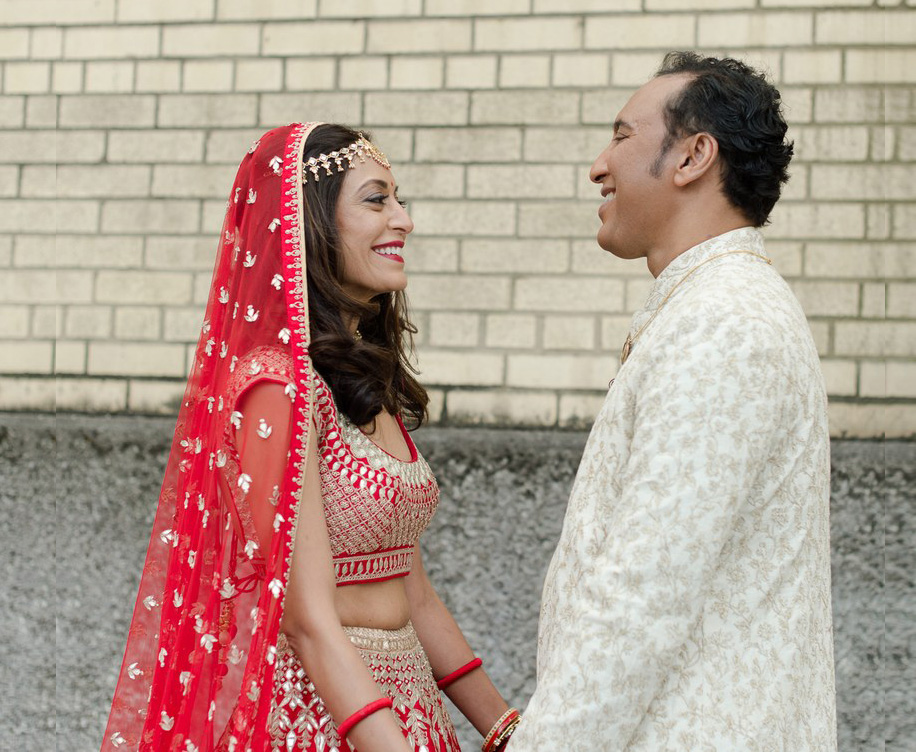 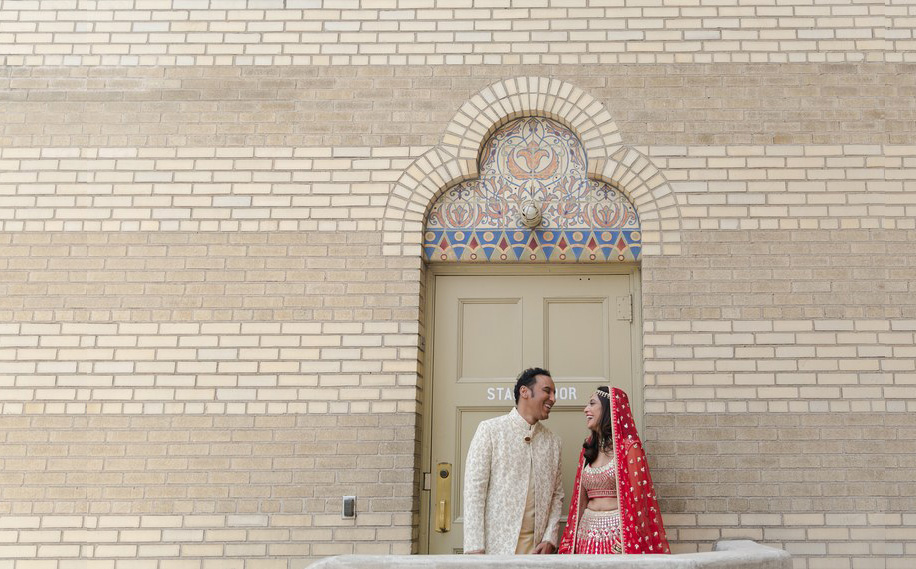 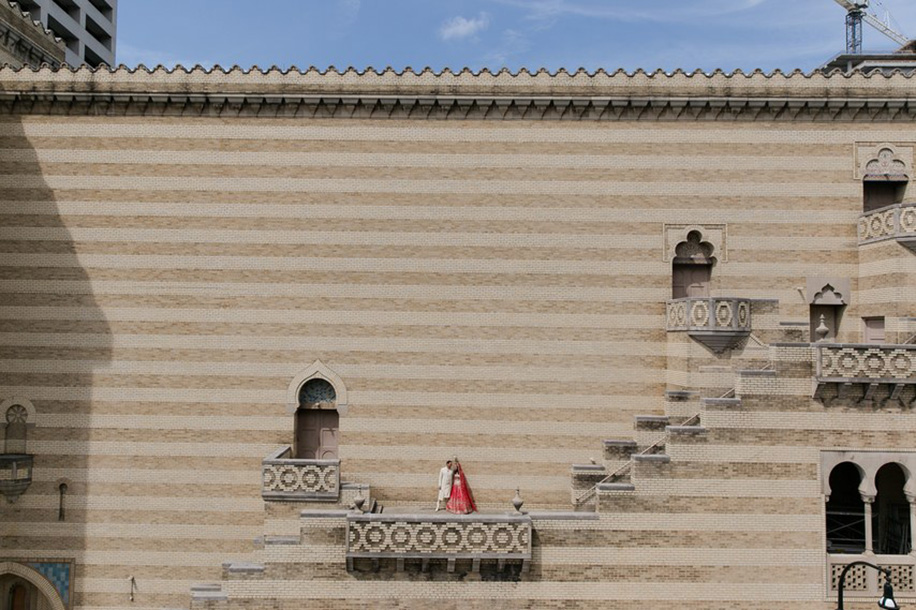 Shefali wore a traditional red lehenga by Indian designer Anita Dongre. With the help of stylist Susmita Patel, the bride accessorized the intricately beaded gown with a long, sheer piece of embroidered dupatta, and the tikka (on her forehead) that her mother wore on her wedding day. She also added a diamond necklace, earrings, and bracelets from Zameer Kassam for the reception.

Aasif looked equally amazing as he wore an embroidered cream sherwani by Anita Dongre for the ceremony and a suit by Sebastian Grey for the reception. The main event began when Aasif hopped on a horse for the baraat to the theater. The couple’s names were also announced on the theatre’s marquee for all of Atlanta to see. For the multicultural ceremony, the couple worked with their officiants to modify and combine elements of their respective traditions. They included Indian-Hindu and Muslim cultures in every single aspect of their wedding, from the ceremony, to the food, to the music, to the clothes. 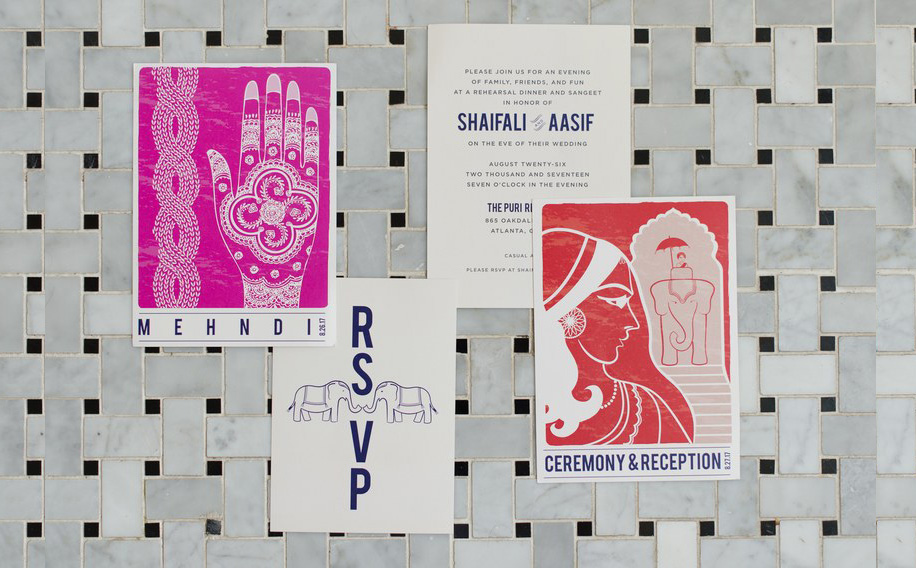 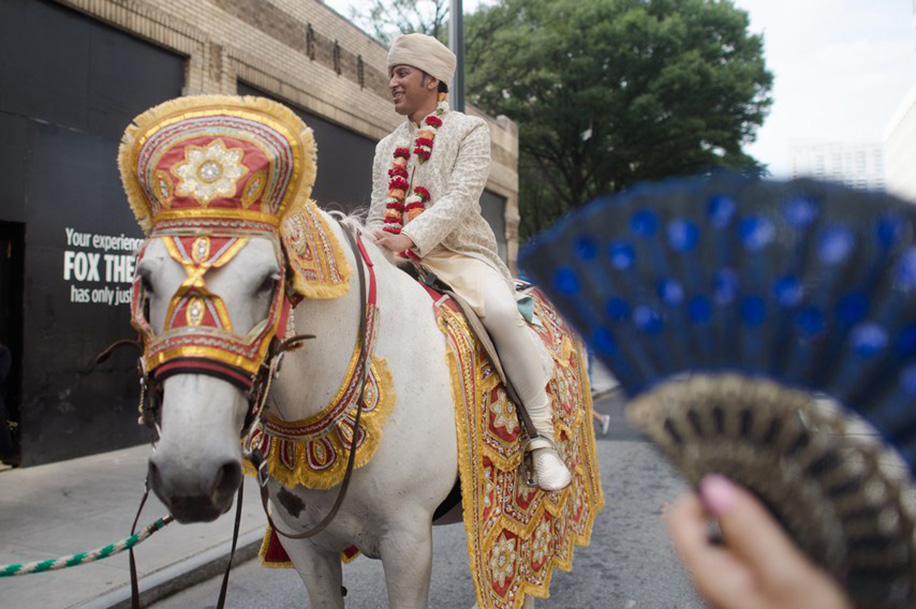 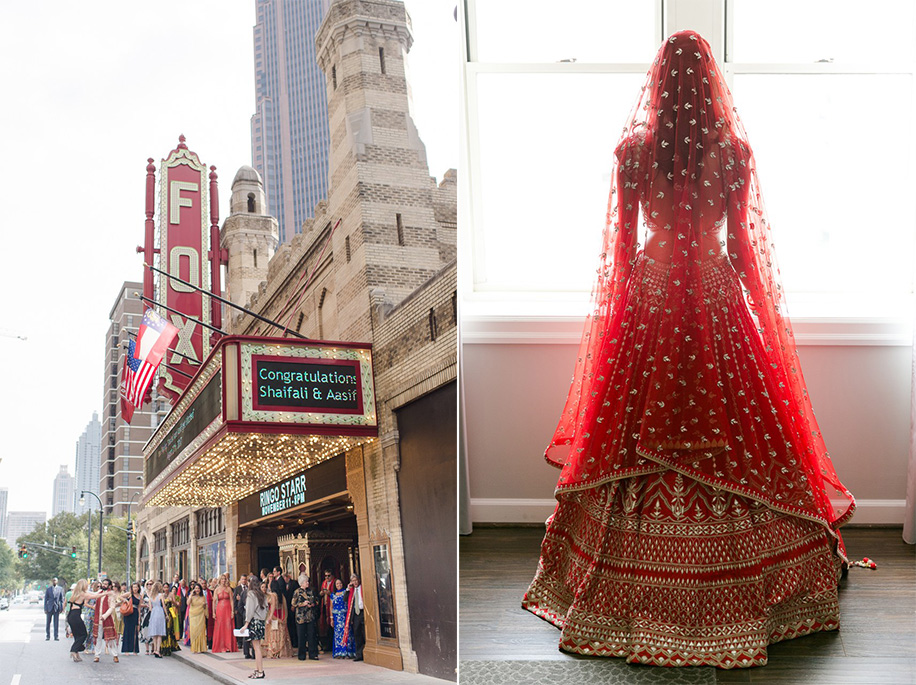 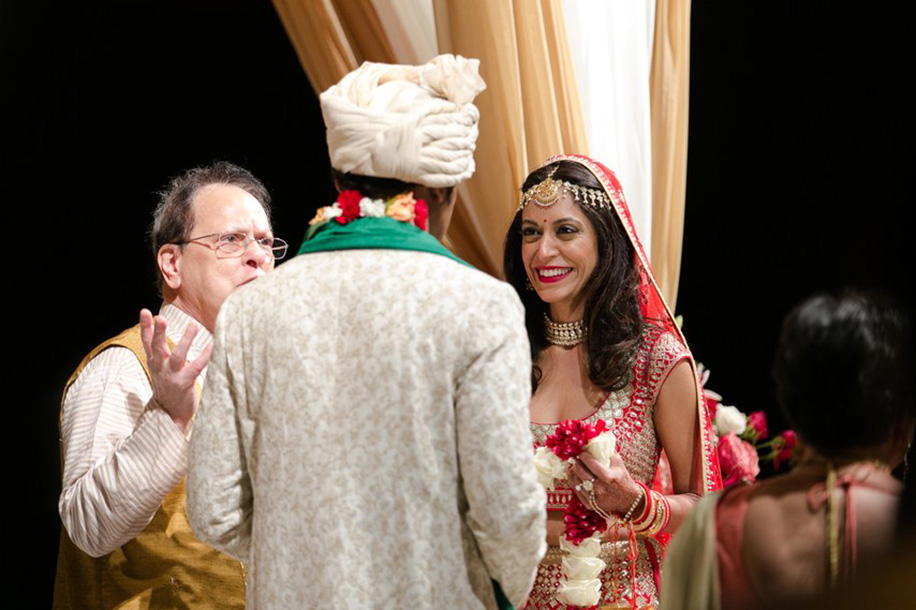 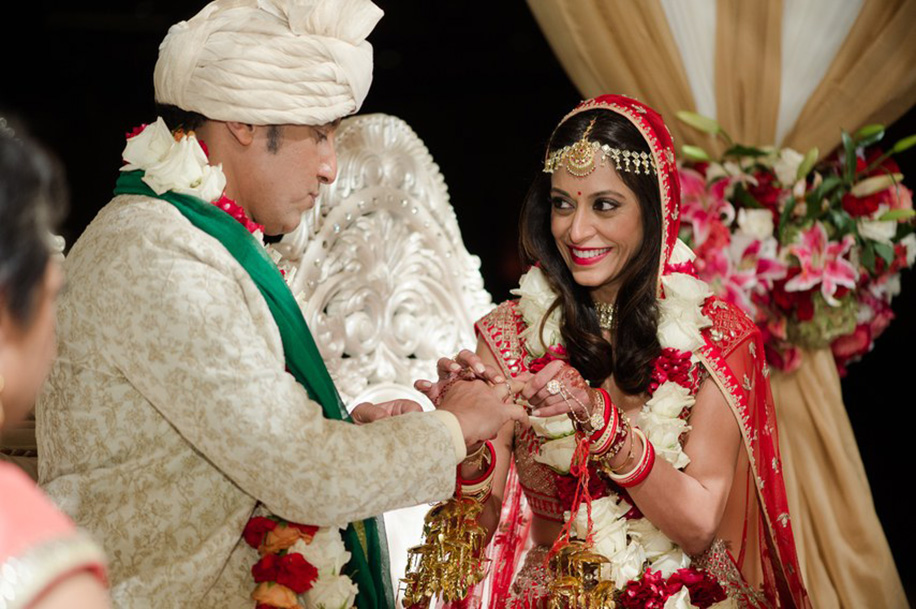 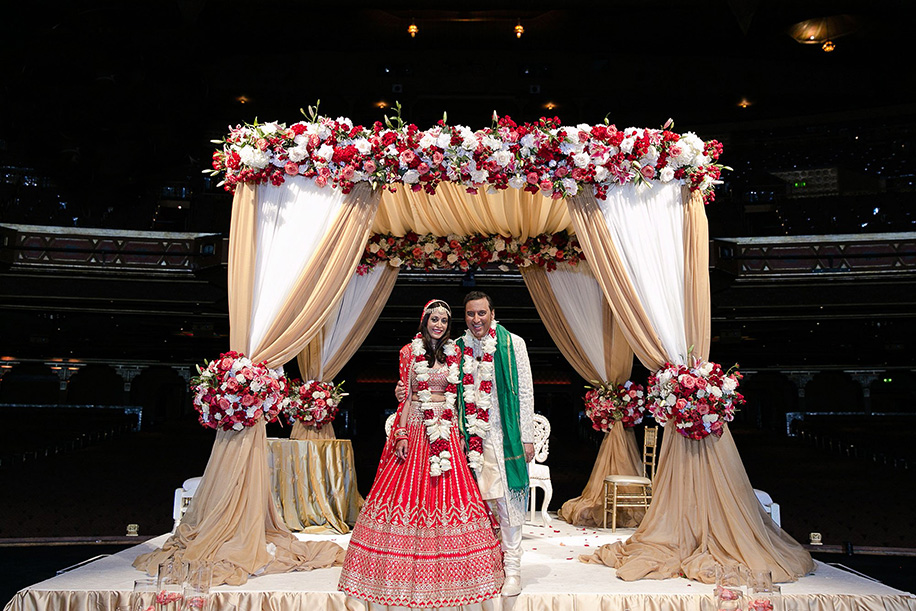 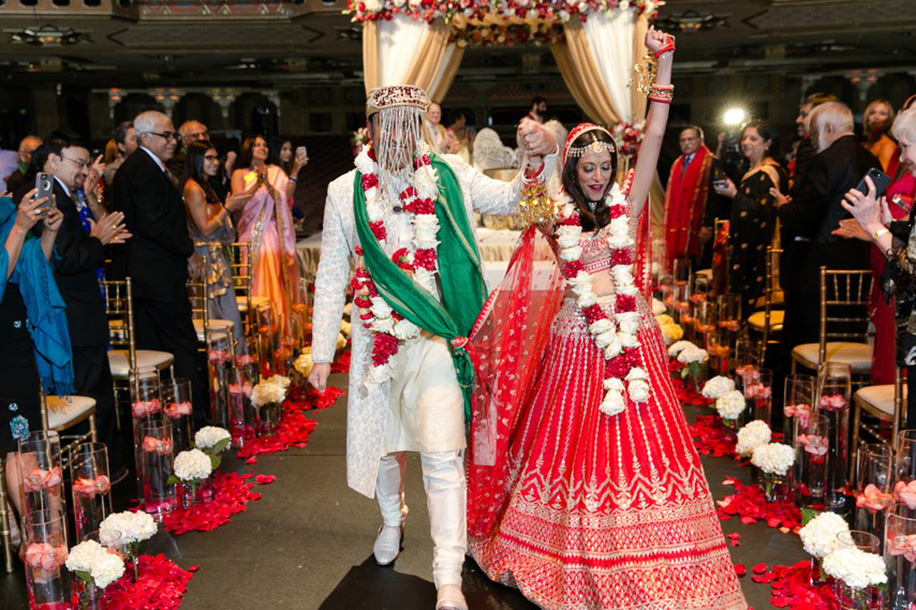 For the reception decor, the couple decided to take advantage of the Egyptian Ballroom. They also played up the circa-1920s architecture with tall arrangements of palm leaves and lots of candles. The over-the-top celebration ended with Band X and DJ Raj playing classic Indian Bhangra and Bollywood songs until midnight, when the guests headed across the street to the Georgian Terrace for an unofficial after party. 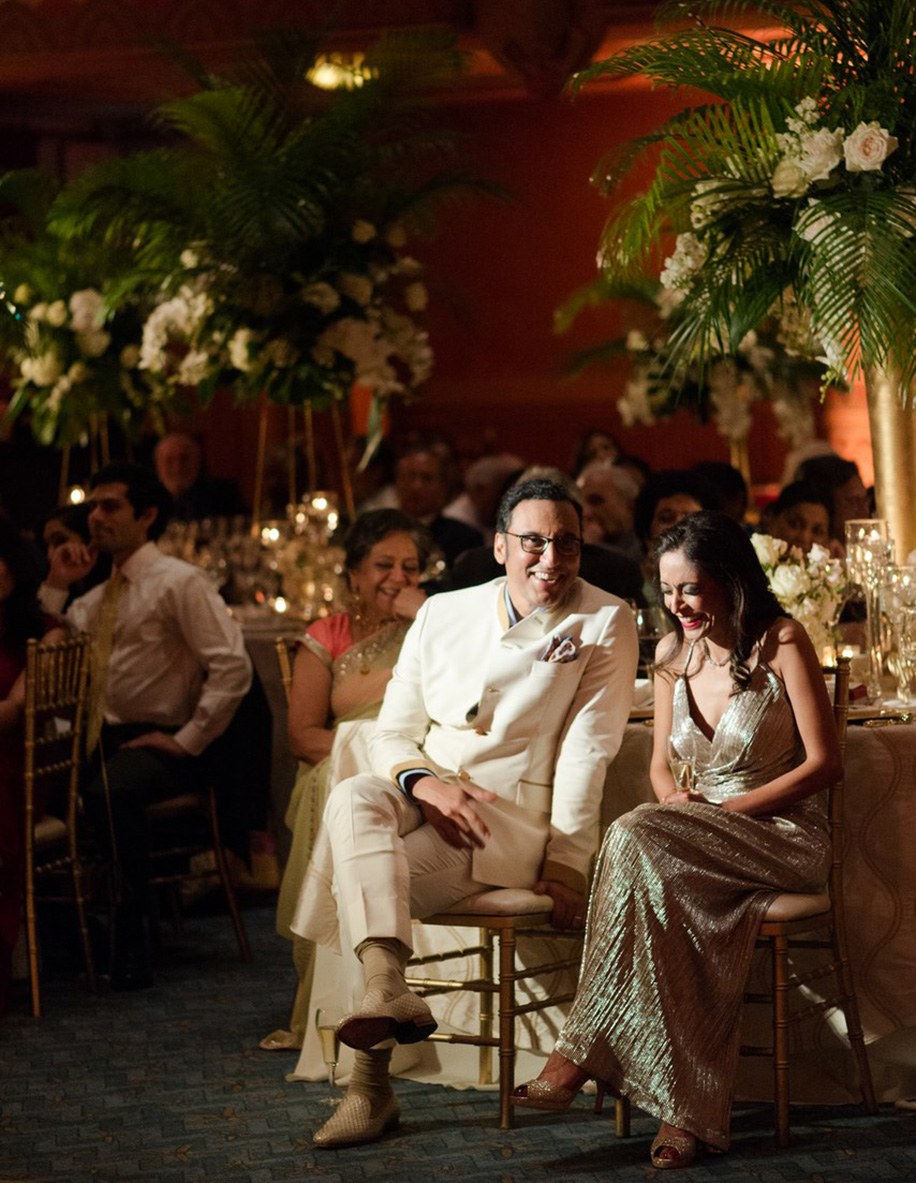 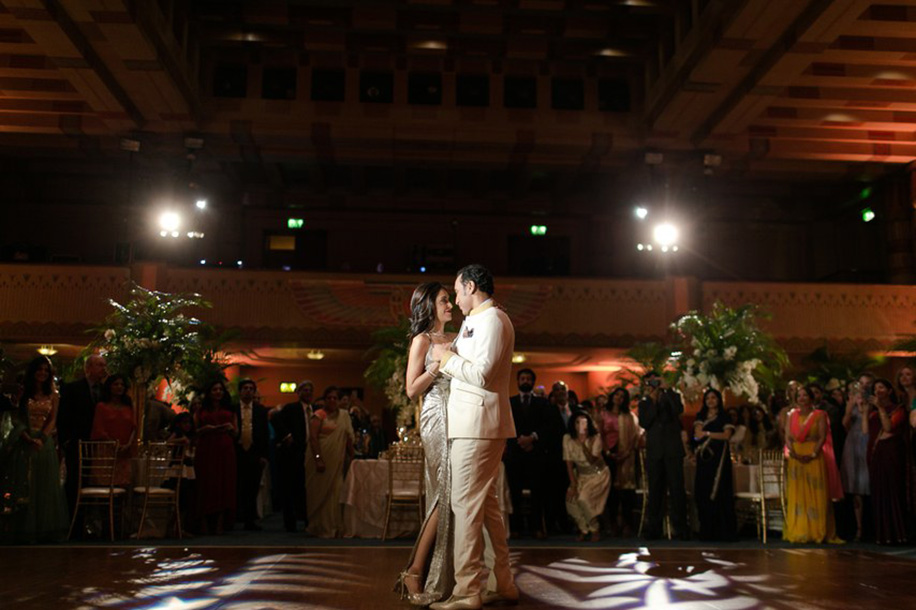 Mandvi and Puri met in 2013 through a mutual friend, author and humanitarian Ruma Bose, and got engaged in October 2016 at the Post Ranch Inn in Big Sur, California. “I wanted to propose while looking out at the water, but for three days it was misty and I kept waiting for the clouds to part and the ocean to come into view from the cliffs,” Mandvi says.

“While we waited, we hiked through redwood forests and stumbled upon an old, towering redwood tree, where, inexplicably, someone had carved the letters ‘A’ and ‘S’ into the trunk of the tree right next to each other,” he recalls. “Like some sort of ancient forest blessing!”

On the morning of their last day at the resort, the two went down to the pool. “There were still clouds, and I thought I would have to give up hope of proposing with a view of the ocean, but the clouds magically parted for 15 minutes,” Mandvi adds. “I got down on one knee, half underwater, and asked her to marry me.”