After months of speculation and media frenzy, the most awaited wedding of 2022 has finally happened. While the couple and their loved ones were tight-lipped when it came to sharing the wedding details, some inside details made their way to us and to the media. While initially, it was reported that, Ranbir and Alia will tie the knot at the family’s ancestral home right behind RK Studios, where his cousin sister Karisma Kapoor got married, it was later revealed that their intimate wedding is at Vastu in Pali Hill where Ranbir and Alia reside. Vastu was a fortress with Mumbai police on location and security arrangements orchestrated by Yusuf Ibrahim, who also happens to be Sunny Leone and Alia Bhatt’s bodyguard. Additionally, all those Who were roped in for the wedding arrangements remained silent on revealing any details. 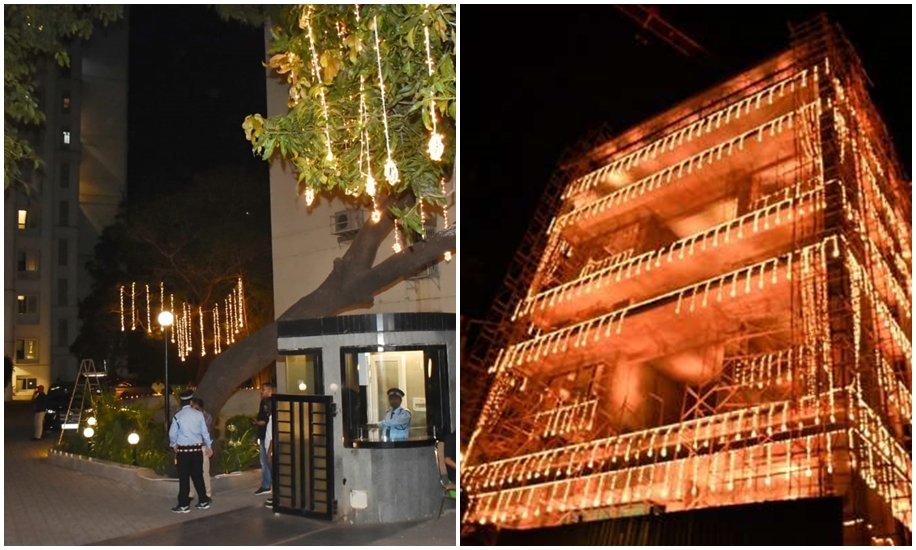 Even though the couple has been dating for a couple of years, they effectively kept their relationship under wraps. However, with their recent movie, Brahmastra’s release on the horizon, their bond came under the limelight.

The afternoon mehndi that took place on the 13th of April was a traditional affair with family performances, female dhol players, and a dholki crew to ensure everyone grooved. The mehndi celebrations began with the song ‘Mehndi Hai Rachnewali’ and the family members also danced to hit tracks like ‘Dholida’ from Alia’s latest movie Gangubai Kathiawadi, ‘Cutiepie’ from Ranbir’s movie Ae Dil Hai Mushkil and ‘Tenu Leke Main Jawanga’. The performances were choreographed by the Kapoor family’s favorite, Rajendra Singh, fondly known as Rajendra Masterji who has Choreographed the wedding of almost all well-known superstars- Aishwarya Rai & Abhishek Bachchan, Karishma Kapoor, Kareena Kapoor, and Sonam Kapoor.

For the mehndi which was decorated with suspended floral installations, Alia looked refreshing in a bright pink lehenga with multi hued floral embroidery accentuated by real gold zari. Crafted using a variety of fabrics whose patches were stitched together, this outfit was customized for Alia and carried symbolic touches that were meaningful to her journey. As usual, Alia kept makeup fuss-free as she opted for a muted, minimalistic makeup look while her jewelry, which included an ornate necklace and maang tikka, made a resounding statement with its kundan work and emerald dropstones. Additionally, she also wore delicate floral bracelets on her wrists. True to her minimalistic style aesthetic, Alia’s mehndi was also a simple one with a circular design at the center of her palm surrounding her and Ranbir’s favorite infinity symbol.
In tandem with Alia, Ranbir donned a pink kurta set on which he layered a matching Nehru jacket. Accessorizing his look was a watch that belonged to his dad, Rishi Kapoor.

The Kapoors are known to be avid foodies, and it was reported that Hill Road’s famous eatery, Elco, catered for the Mehendi event, while the catering reins at the wedding were handled by multiple caterers. As per some reports, the couple is said to have booked the grand Crystal Room and Ballroom of The Taj Mahal Palace, Mumbai for their Reception on the 17th. However, the venue according to an insider at Taj is booked under other names, so this maybe a rumor or done so for security reasons. With Neetu and Ranbir Kapoor swamped with their shoot schedules, it is also likely they might skip out on holding a formal post-wedding Reception altogether like many celebrities in recent times, who have kept their festivities intimate. Also, since Alia holds British citizenship the couple according to her close biz associate may opt for a registered wedding and a small celebration in the UK too.

Like most other details, the extremely limited guest list was finalized at the last minute. For the family-only affair, Ranbir, according to an inside source did not even invite his friends and only a few days before the wedding did he phone call his cousins to formally invite them- Kareena Kapoor and Karishma Kapoor, Nikhil Nanda and Shweta Bachchan Nanda, with her children Navya Naveli Nanda and Agastya Nanda. His sister Riddhima Kapoor Sahani flew down from Delhi. Jaya Bachchan and Amitabh Bachchan were not part of the guest list.

With a rustic enchanted forest theme, the wedding was a dreamy one lit up by fairy lights and accentuated by lush green foliage that added a dash of color. For the wedding, Alia wore a hand-dyed ivory sari with intricate embroidery work. Her accessories included a stunning diamond-studded choker necklace with drop pearls, an ornate mathapatti, bangles, and matching jhumkas. In sync with Alia’s look, Ranbir also donned an embroidered silk sherwani with diamond-studded buttons paired with a shawl crafted out of zari maori embroidery. Adding to his look was a matching safa accentuated by a kilangi crafted out of diamonds, emeralds, and pearls along with a regal multistrand pearl necklace.

A true family affair, the wedding brimmed with joyful moments as the couple playfully exchanged varmalas and a quick kiss. After the wedding, the couple went on to cut a three-tier cake and made a champagne toast to celebrate the beginning of their new adventure. Later in the evening, once the wedding celebrations were done, the couple changed their ivory wedding outfits to matching red ones and danced the night away to groovy Bollywood numbers. After the wedding celebrations, the couple also hosted a reception party at Vastu itself where they amped up the glamor levels with their outfits. Dressed in a short silver-hued Oscar de la Renta dress, Alia looked all set to party the night away, while Ranbir looked dapper in a black suit. Bollywood bigwigs like Shahrukh Khan and his wife Gauri Khan, actor Aditya Roy Kapur, Arjun Kapoor along with his girlfriend Malaika Arora, and Karan Johar were some of the attendees at this star-studded bash. While many assumed that the couple would work with celebrity wedding planners, like, Shaadi Squad or Milestones to Memories who orchestrated Armaan Jain and Anissa Malhotra’s wedding, Ranbir and Alia chose the simple route. They handed over the gifts and decor design and execution work to a close friend of Alia who is into bespoke gifting and home decor.