The superstar and his long-time beau chose Alibaug for their intimate nuptials.

The Mansion House, Alibaug
Bollywood superstar Varun Dhawan and couturier Natasha Dalal, whose wedding was to be held in Khao Lak, Thailand, finally zeroed in on Alibaug for their much-awaited nuptials. The Mansion House Alibaug, a 25 room luxury property owned by the Ghai family (Hoteliers and promoters of Kwality ice cream) near the Mandwa Jetty was the chosen venue.

The celebrations were planned keeping in mind an intimate feel, and a big focus on safety and adherence to Covid norms. Ravi Ghai, the Chairman of the Hotel is a close friend of the Dalal family. Gaurav Ghai, the Co Chairman and the team at The Mansion helmed by Sumita Ghai (who orchestrated the decor) and Romil Ratra, the CEO along with the team at Intercontinental Marine Drive (also owned by Ravi and Gaurav Ghai) pulled out all stops to ensure it was a simple yet mesmerizing affair. Shaadi Squad, the wedding planners while ensuring everything was smooth and well organized also turned the venue into a veritable fortress with a huge posse of bouncers and guards.

Mumbai to Alibaug
There was considerable excitement at the ports in Mumbai, since so many celebrities were travelling by RORO ferry service and the speed boats. At Mandwa jetty all the wedding guests were welcomed by a huge number of locals. A few guests including the groom Varun Dhawan travelled to Alibaug by road instead.

The functions
Day one was an intimate family dinner with the bride and her family and some members of the groom’s family while Varun and his closest friends partied at a villa close by. The celebrations commenced with the afternoon Mehendi where the dress code was ‘Indian festive’. The lavish food spread included open air bbq section with live grills, an Italian kitchen with an Italian chef who was doing fresh pizzas, pasta a la carte and a burrata bar. A cold counter that had salads and also a mezze bar. The Mansion House also curated a special local Alibagh coastal food experience menu with locally sourced fresh caught seafood and regional specials.

The theme/ dress code for the evening Sangeet was ‘fabulous and formal’ with Asian starters and an elaborate sit-down Indian and Asian dinner.

Day 3 started with the Haldi ceremony which got delayed due to the previous night revelries. The lunch was a Mexican fiesta with an expat chef preparing live dishes. Also on the menu was an extensive Middle Eastern selection with mezze and shawarma. And a selection of classic Indian for elders. Decor designer Sumita Ghai dressed the venue magnificently. As per the hosts requests guests didn’t take any photos of the decor or setting and all vendors from the DJ, Entertainers and service staff of The Mansion House were not allowed to bring in their phone cameras. The baarat started at 7 pm and the groom made a grand entry on a quad bike and not the ghodi. Songs Aaj Mere Yaar Ki Shaadi Hai, Tenu Ghodi Kisna Chaadaya played at the baraat. 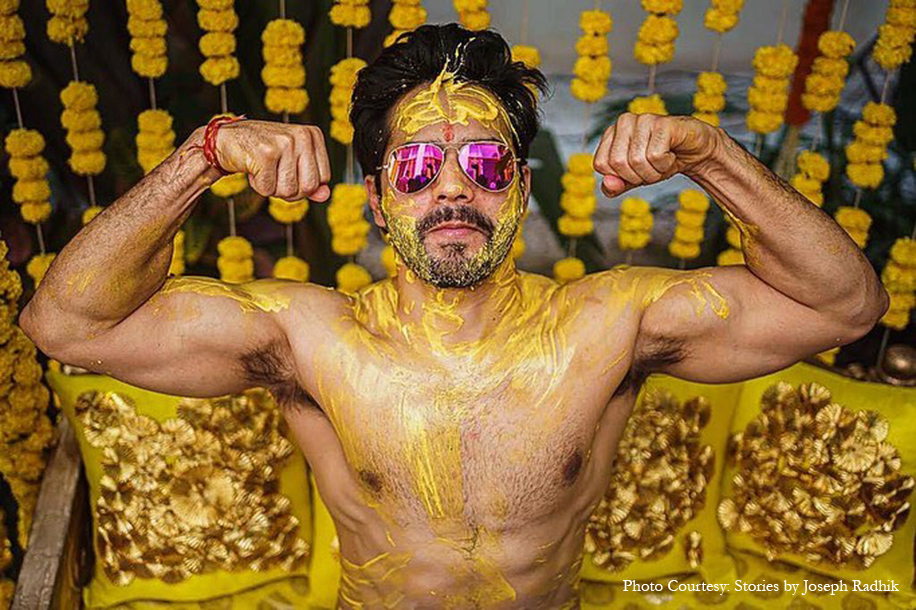 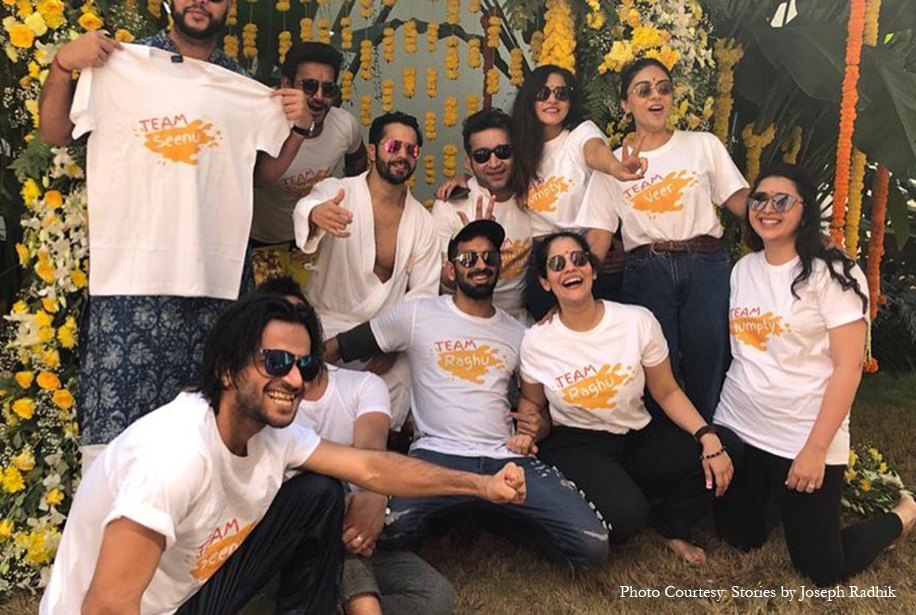 Natasha and Varun wore coordinated ivory outfits for the pheras. While Natasha designed her own lehenga with hints of gold and silver embroidery, Varun wore a heavy ivory sherwani by Manish Malhotra with a hint of powder blue.

After the Pheras, the just weds stepped out to pose for the media who were anxiously waiting to photograph them. Since it was a long, tiring day for the hordes of Photographers who couldn’t even take photos of B-Town guests, the family made dinner arrangements and some of them acknowledged the kind gesture on social media.

Later everyone changed into party clothes to proceed to the party room of The Mansion House where the party continued till the wee hours of morning.

Natasha and Varun
Natasha is the daughter of accessories designer Camelia Dalal (she is half Parsi half Czechoslovakian) and businessman Raju Dalal. Natasha grew up in Juhu, very close to Varun’s home where they both schooled at Maneckji Cooper in their vicinity. Natasha pursued a career in fashion, and now runs her own design house by the name of ‘Natasha Dalal Label’ with a store in Bandra. Her mother Camelia alongwith her business partner Shelina Kukar retails accessories (label ‘Art Apparel’) from the same store.

According to an insider, the couple will set off to Istanbul, Turkey for their honeymoon where they will be staying at the Ciragan Palace Kempinski, a beautiful palace hotel that overlooks the serene waters of the Bosphorus.