Former TV anchorwoman Letizia Ortiz married Spain’s Crown Prince Felipe in a glittering royal wedding, Spain’s first in 98 years. Ortiz, whose title is now Princess Letizia of Asturias, wore an off-white silk wedding gown with a flowing silk veil and a 15-foot train embroidered with heraldic symbols, designed by Catalan maestro designer Manuel Pertegaz. The most striking feature of the gown was a high-standing collar showing off the bride’s looks to perfection. The collar, like the edging of the rest of the dress, was picked out with heavy white embroidery depicting the fleur de lys and ears of whea- details from the Prince of Asturias crest. She wore the same platinum and diamond tiara as her new mother-in-law, Queen Sofia, on her marriage to King Juan Carlos. For jewellery, Letizia wore a dazzling pair of diamond/platinum earrings which were a gift from the king and queen. Hers bouquet was an arrangement of white lilies of the valley. 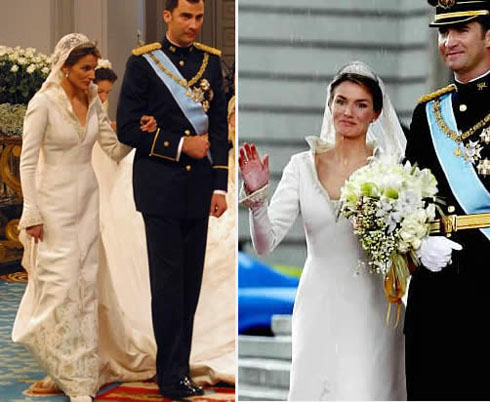