“Law and Order: SVU” star Mariska Hargitay wed actor Peter Hermann at a church in Santa Barbara. Pink was the signature color of the bride’s mother, the late screen siren Jayne Mansfield, and on her wedding day the actress kept the memory of the 1950’s blonde bombshell alive by donning a Carolina Herrera creation in blush. The strapless gown with a deep sweetheart neckline contained a wealth of sentimental secrets, including the groom’s initials and the wedding date elaborately embroidered for posterity inside the lining, and a locket containing the smiling portraits of Mansfield and the bride’s grandmother tucked into the folds of the dress, so the bride’s family could be close to her in spirit. To complete the look, the actress adorned herself with a diamond bracelet, drop earrings, a bouquet fashioned of pale roses interspersed with gardenias and lilies of the valley, and a three-quarter length veil which, when lifted at the altar, revealed a fragrant arrangement of roses and gardenias pinned to the bride’s chignon. 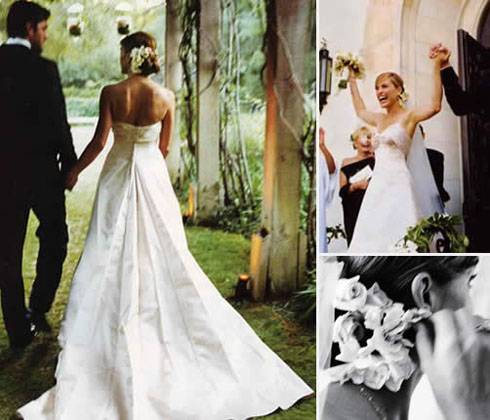