Maxima and her mother-in-law, Queen Beatrix, travelled to the designer’s studio in Rome to discuss their requirements for a gown that would take people’s breath away the world over. And Valentino lived up to his reputation, creating an long-sleeved cowl necked confection, made of ivory Mikado silk, which flared out slightly from the waist, emphasising the princess?s neat figure. The five metre train, made from the same fabric, was inset with panels of embroidered lace, echoing the silk tulle veil featuring hand-embroidered flower and tendril motifs. A exquisitely pretty diamond tiara, a worthy crown for Maxima’s beauty. She was carrying a bouquet of white roses, gardenias, lily of the valley and two kinds of foliage, created by Jane Nienhuys and Elisabeth Thierry de Bye-Dolleman, florists to Soestdijk Palace. The handmade, half-round platinum wedding bands, 2.5 mm thick, were made by an Argentine jeweller, who charged the couple the symbolic amount of just one peso. Maxima will be wearing hers with pride alongside the impressive platinum-set engagement ring designed by her then fiance. The centre stone of an oval orange diamond is flanked by two emerald-cut diamonds set in bands encrusted with brilliant-cut diamonds. Maxima and Willem-Alexander were accompanied by four bridesmaids and six tiny attendants wearing deep red velvet outfits. The bridesmaids, who included Maxima?s younger sister Ines, carried garlands of dark red flowers as they followed the royal bride up the long aisle of the Nieuwe Kirk. 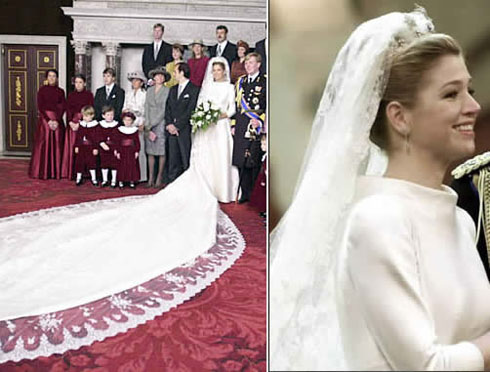