Our Favorite Invitations from Cross-Cultural Weddings

Get inspired by these wedding invitation cards that paid tribute to the couples' unique stories.

Multicultural weddings are beautiful in the way they unite two diverse and distinctive cultures.That’s also why designing such wedding invitations are challenging yet rewarding. The creations have to showcase the essence of two individuals and their cultures, their love story, and also feature their joint tastes and design preferences.

Blooming Romance
“This special invitation was for Rohan and Renette. Soon after they met, they fell in love and got married in South Africa, the country where the bride hails from. The three of us met at our studio in Shahpur Jat when they were visiting India and we started designing the invite as soon as we received their brief. The flowers used in this suite are Proteas which are native to South Africa. This was a great way of using an element borrowed from their story in the creation of their invitation. They were very sure of the colors, fonts, and placements that they wanted. The final product turned out to be a true reflection of their inherent style – simple, classic and tasteful.” – Tanvi Gupta of Be Jalebi 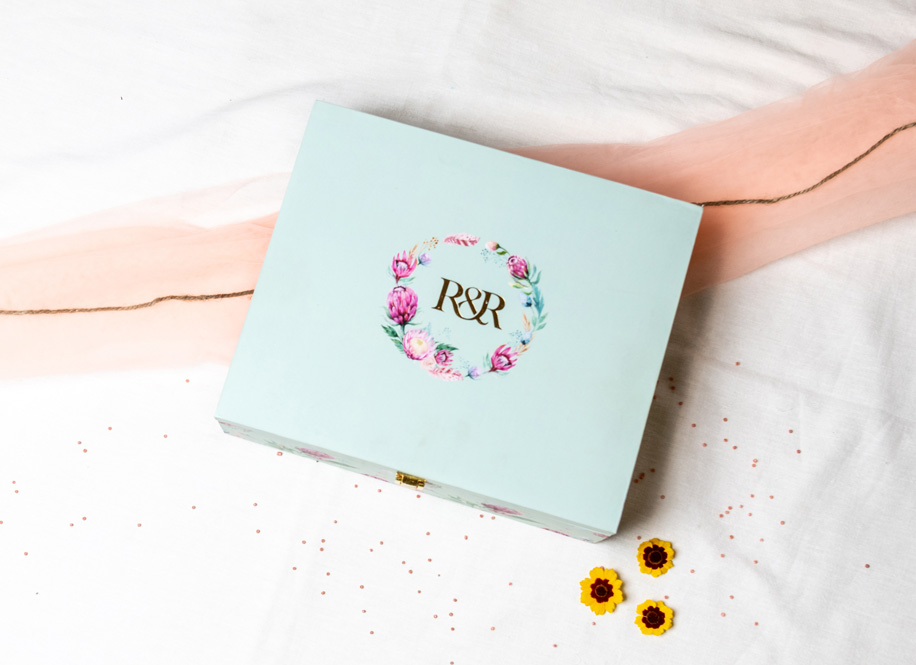 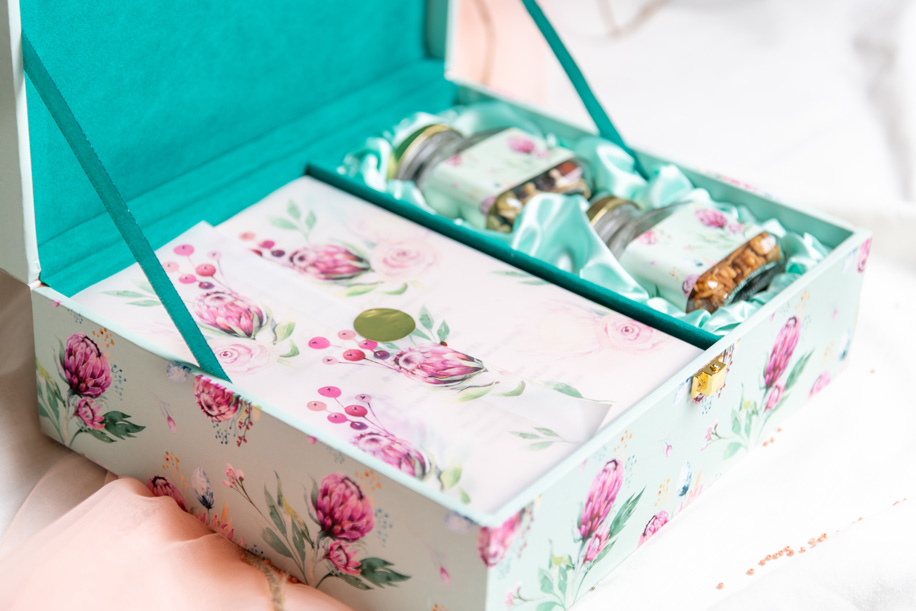 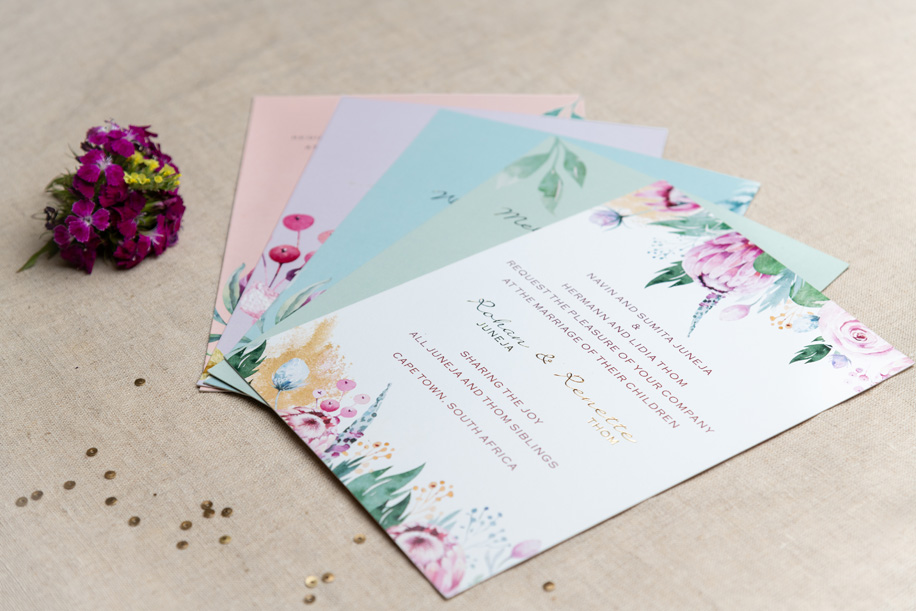 Dreaming of Paris
“Think about romance and one of the first images that will come to your mind is of Paris. John, an American boy, flew Simrun, a Punjabi girl, for an impromptu holiday to the ‘City Of Love,’ only to surprise her later with a ring in front of the Eiffel Tower. As an ode to this landmark moment, Simrun wanted her invite to reflect everything about Paris and so it did. From lace details, Parisian stamps and a tag that said – ‘We will always have Paris’ – all of it were incorporated into the card. We chose a soft color palette to complement these elements and the results were every bit romantic!” – Itchha Talreja of Itchha Talreja Designs Oh, Hi! Ohio
“Aditi and Neil’s wedding invitations were a representation of Indian culture and colors in true glory which fused seamlessly with backdrops of their American wedding venue. The insignia of their wedding was an Ohio stamp with the skyline of the city where the two love birds chose to get married. Their wedding was hosted at a beautiful American estate which also formed the cover of the card. It displayed the stone water body which was a part of the beautiful property and in order to bring in an Indian touch, we displayed Indian lotuses over the water. Within this cover, we placed function leaflets that featured Indian art to display the nature of the events.” – Puneet Gupta of Puneet Gupta Invitations Window to the Soul
“Arjun and Varsha have a very warm love story that spanned across continents. She was a fashion designer from Mumbai, and he was an actor from Brooklyn, US. While designing their wedding invitation, the initial idea was to bring together their professions in some way. However, as the idea evolved, we became more focused on keeping the message simple and a little more traditional, but still impactful. In the final invite, we had quirky illustrations of the groom looking through the brick-walled windows of Brooklyn and the bride gazing through an Indian ‘jharoka’ (window) from Mumbai with the curtains tied in a symbolic knot.” – Ranjani Iyengar of Pink Whistle Man East Meets West
“This was an invite that we made for a wedding with a South Indian bride and an American groom. We created caricatures inspired by the couple, and customized the look taking inspiration from their wedding attires, skin tones, and even their eye colors. The two of them stood against the backdrop of tall trees which was symbolic of the botanical gardens where their celebrations took place, and the theme was carried across all the program cards. We described the significance of the various wedding rituals in detail to help their international guests gain a better understanding of the ceremonies.” – Sonal Aggarwal Jolly of Turmeric Ink 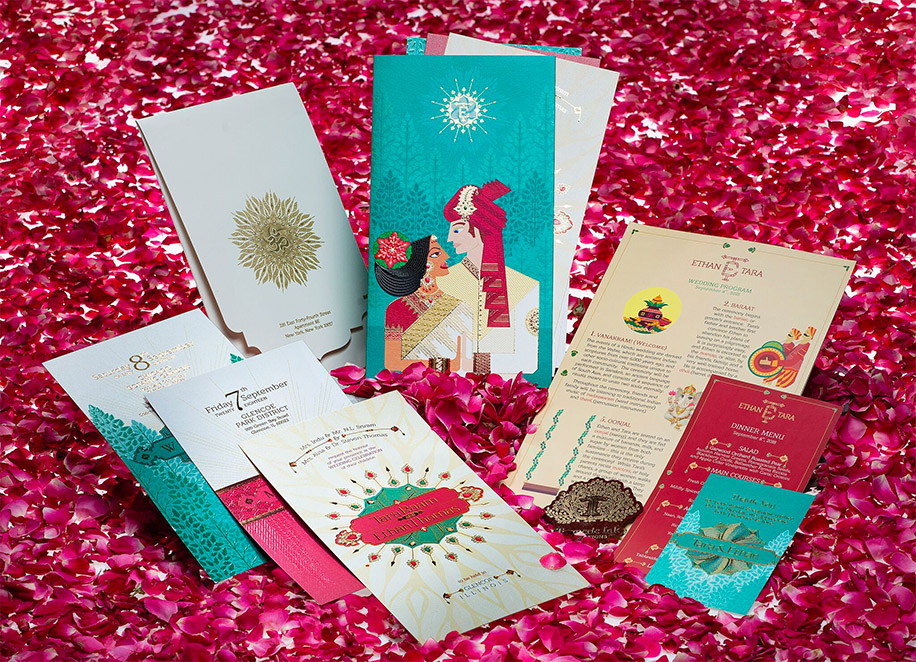 Reflection of Love
“Vibhooti and Rodrigo’s story is that of an Indian girl from Mumbai meeting a guy with a Portuguese background from Chicago, falling in love and eventually deciding to get married in Cancun, Mexico. Their wedding was to take place by the sea, so we decided to use pastel watercolor strokes with reflective silver elements as the design theme for the invite. In a specialised boxed version later constructed, that we called ‘The Reflection Suite’, the couple’s silver metal wedding logo was placed on top of a glass box making it look like it was floating above clear waters and casting its reflection. The favor cases inside followed the same theme.” – Suneet Sidhu of Create-A-Flutter 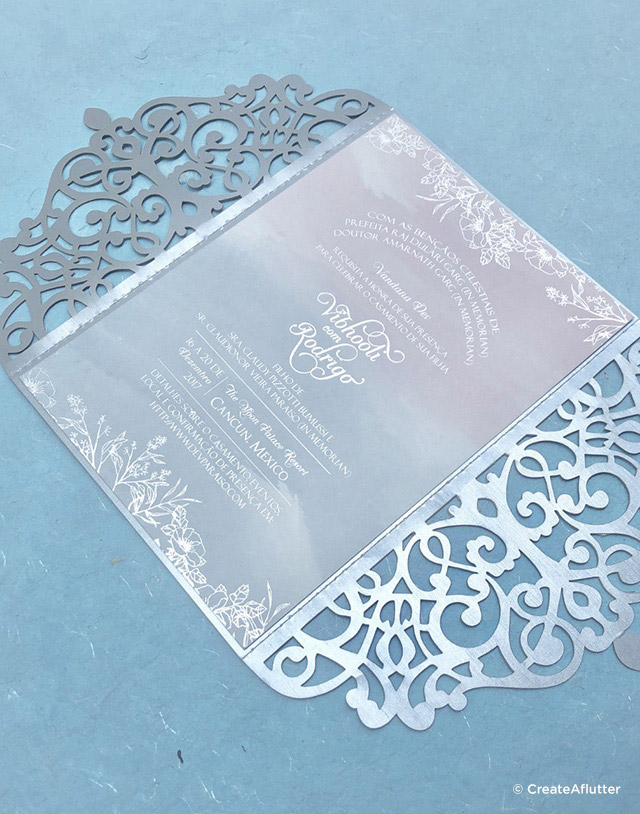 The Saree Saga
“To depict the cross-cultural angle of Snehal and Subhayu’s relationship, we made use of art styles from the saree borders of their respective states. With the help of designs seen on Baluchari (Bengali saree) and Paithani (Maharashtrian saree), we created a storybook-like card that was fashioned in a way that reminded guests of the Amar Chitra Katha books and comics. We aptly rechristened our edition, which was inspired by their seven-year relationship, to Amar Prem Katha. This folktale was not just about a marriage of two individuals, but also of the union of two rich and artistic cultures. The chapters in this book chronicled the time periods, origins and significance of each wedding ritual. As any happy story goes, the concluding paragraph in each of the chapters was the promise of a fun-filled celebration in the form of ceremony details.” – Ranjani Iyengar of Pink Whistle Man Modern Indian
“We created this card for Philip and Jasmeet. While the groom was from Seattle, the bride came from a Punjabi background. Given their story, we wanted to design something that had an unmissable Indian touch but yet was very modern. So, we decided to go ahead with an invitation that was clean and included colors associated with an Indian wedding. A sleek black card with a laser-cut design on the front opened to reveal white leaflets with bright borders and golden lettering. It was a perfect amalgamation of contemporary and traditional aesthetics.” – Disha and Harsh Munshaw of Customizing Creativity