The enchanting environs of Kerala came alive with music, and revelry as Aakriti and Aditya tied the knot in two different ceremonies.

Fate brought Aakriti Dobhal and Aditya Krishnadas together not once but twice when they were introduced by a common friend and then connected again online.

Aakriti tells us about her cross-cultural wedding in Kerala which naturally, was twice the fun. 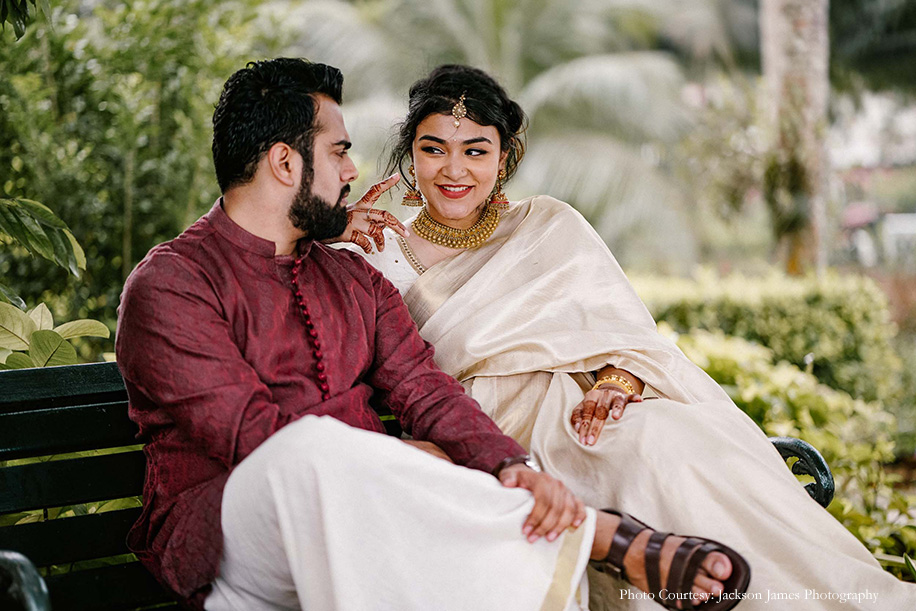 How we met
“Aditya’s cousin and I had met very briefly through a mutual friend, and she thought he and I would make a good pair,” Aakriti explains, “She and a common friend decided to set the two of us up. While I wasn’t up for anything serious, I didn’t mind meeting Aditya. On the day itself though, I was tired so I dismissed the idea.” Weirdly, only a fortnight later, Aditya and Aakriti connected online. She says, “Initially, neither of us had any idea… We only discovered this coincidence after we had chatted for a while.”

Marriage wasn’t on their minds when they started seeing each other but soon they found themselves falling for each other. Aakriti says, “Finding out we were meant to be together did not come as an epiphany. The more we spent time together, the more we felt we were right for each other. Aditya is not about grand romantic gestures, but he is very sensitive to others’ needs. He is balanced, courteous and never fails at making an effort to make things work out. He is just a beautiful human being which is what I love about him!”

On a visit to Dubai, she did have an epiphany though, “I was with him in Dubai last year for 20 days and I realized that the compatibility I shared with him was something I had never shared with anyone else. Before my trip, I thought I would never be able to live with anyone. After the Dubai break, my view had changed. That sealed the deal for me.”

Wedding Proposal
“It was a weekend trip to see Aditya and I had no idea what awaited me. I left on Friday and since the traveling was hectic once I reached Dubai, I was ready to crash. He came to pick me up and when we reached his house, he opened the door and insisted I enter first. Once I stepped in, I was welcomed into a room that was so beautifully set up with red and white balloons and candles. Music played in the background while a bottle of champagne was also kept on ice. It was the perfect intimate setup and one that I have always wanted. Aditya’s friends helped him put it together and I had no idea they were all hiding in the building when I arrived! Aditya made a beautiful speech before he popped the question and it was all so dreamy that I was completely lost in the moment. As he went down on one knee and popped the question, I instantly said ‘Yes’!”

Wedding Venue
“Most of Aditya’s family members are from Kerala so we decided to host our wedding in beautiful Kumarakom, popular for its enchanting backwaters. We split the celebrations and hosted them across two properties. Half the guests were hosted at Lakesong Resort Kumarakom while the rest stayed at The Zuri Kumarakom. Both are among the best properties in Kumarakom.”

Mehndi
Departing from the usual gaudy revelry, Aakriti and Aditya chose pristine white for the mehndi. The bride says, “The Mehndi took place at The Zuri Kumarakom and we wanted to do something that wasn’t too traditional. Aditya and I wore white instead of bright colors. We wanted minimal décor and minimal use of floral arrangements since we were not keen on the idea of wasting too many beautiful flowers for a few hours of function. We wanted more greenery and our wedding planners managed to achieve just that for us.” 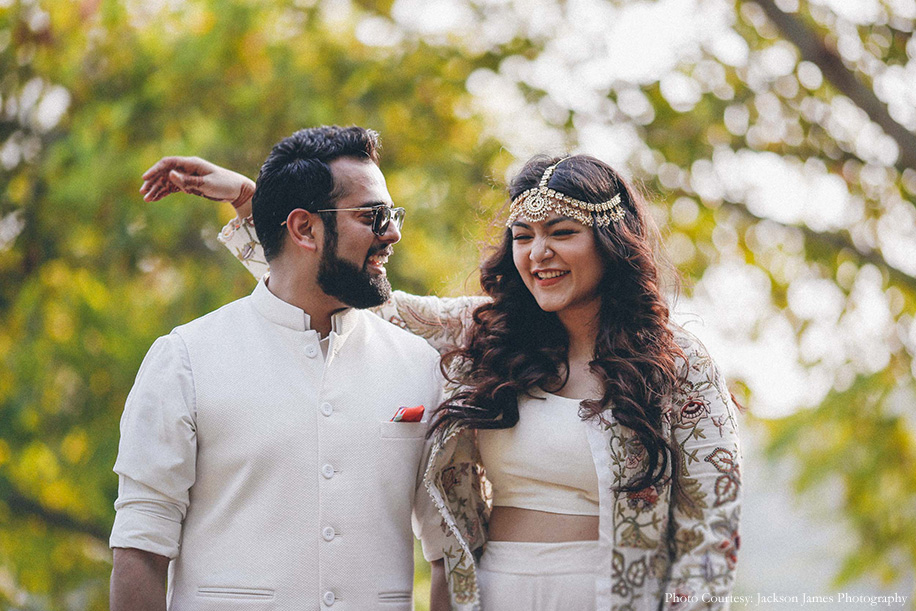 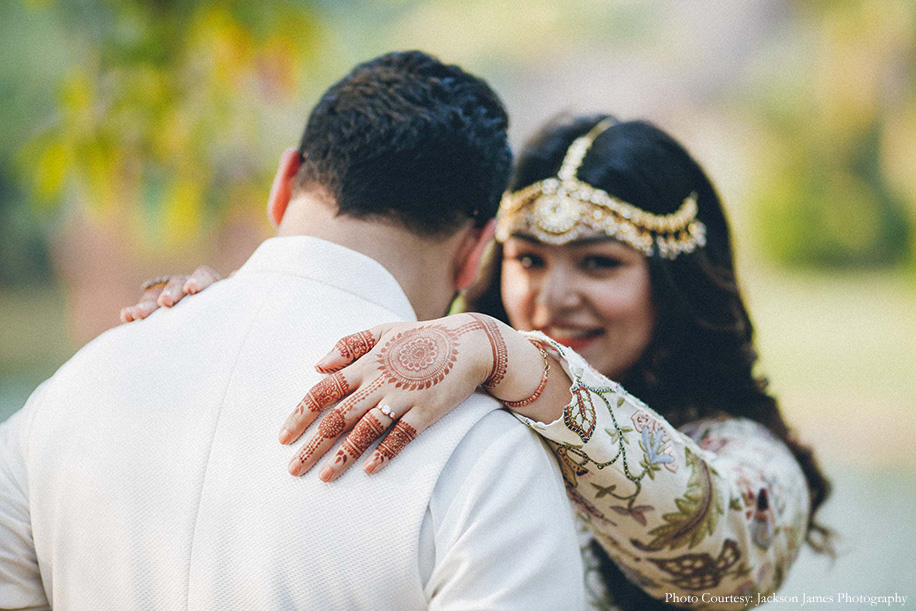 Sangeet
“After the Mehndi, we had the sangeet later that night at Lakesong Resort, Kumarakom. The resort was exceptionally good with their hospitality and we loved how they went above and beyond to make this celebration a memorable one for us. We kept suspended yellow lights and leaves as our décor highlights, keeping greenery as the main aesthetic. Aditya and I wore dark colors to go with the glamor of the night. The evening comprised of heartwarming performances & speeches by our nearest & dearest and everyone had a great time dancing to Bollywood tunes.” 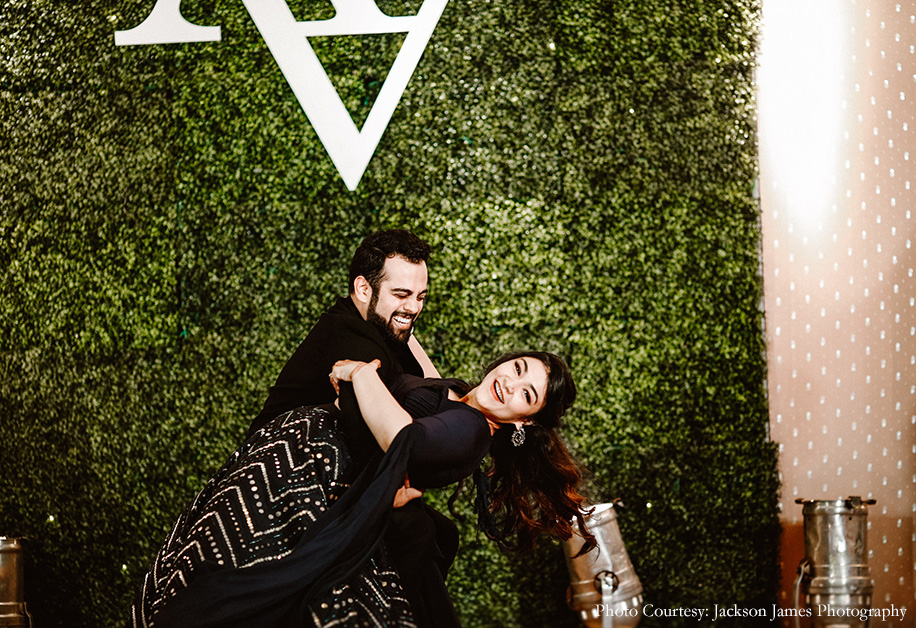 South Indian Wedding
“This ceremony took place at Lakesong Resort, Kumarakom. It was a typical Nair wedding; elegant and brief, unlike elaborate Punjabi weddings. There were very few rituals and fewer religious compulsions, which was quite new for me since I am North Indian, but I absolutely loved the simplicity of it all. Pink, white and green with a touch of gold made for an enchanting colour scheme for this beautiful ceremony. A mandap decorated with white drapes and pink and white florals looked elegant against the picturesque background. We had a beautiful ceremony witnessed by our nearest and dearest. It was magical. The ceremony was breathtaking and I felt like I was in a fairytale. We wore traditional outfits that were simple yet elegant.” 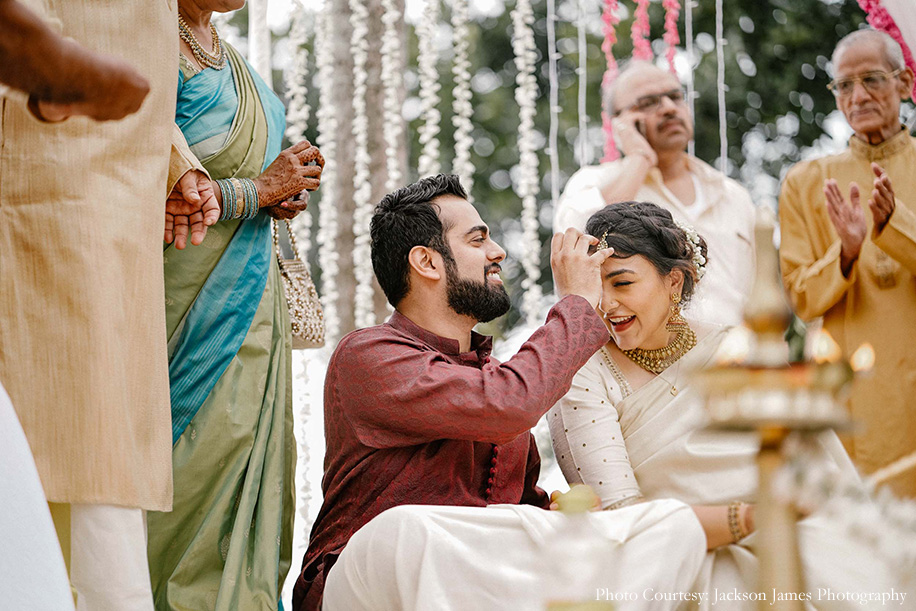 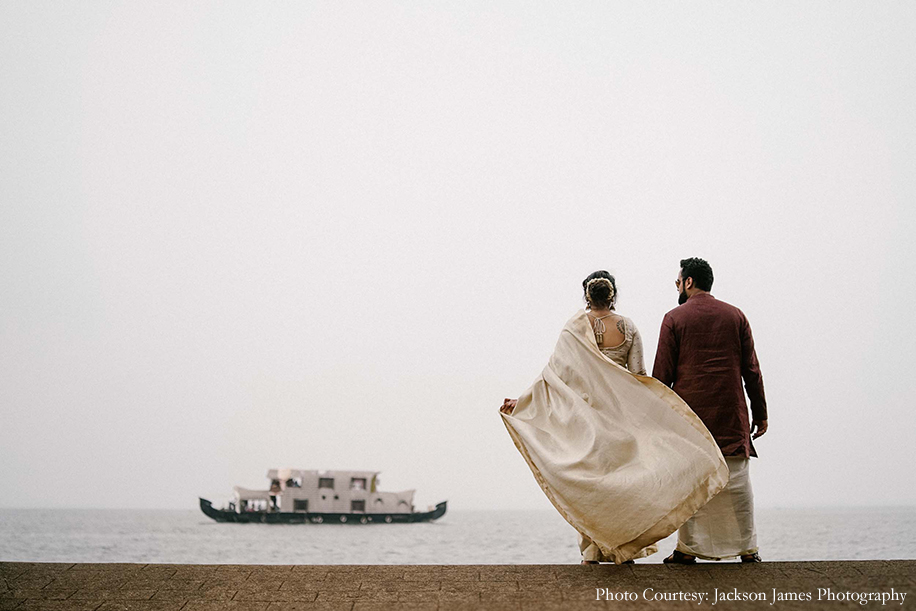 North Indian Wedding
“The wedding was at The Zuri, Kumarakom and was just how we had imagined it to be. We followed a red and white color scheme. Our mandap was definitely the focal point of the decor. While rich white drapes covered the four pillars and made for the backdrop, fresh white flowers made for ceiling decorations and curtain holdbacks. I wore the quintessential red lehenga with elegant jewellery and Aditya looked royal in his red and white outfit paired with a safa. We wanted to go minimal with all our functions and looks & by far I do think this was the most pared down version of a Punjabi wedding. But we made sure it was pretty and comfortable for all of us. Nothing fussy or over the top at all.” 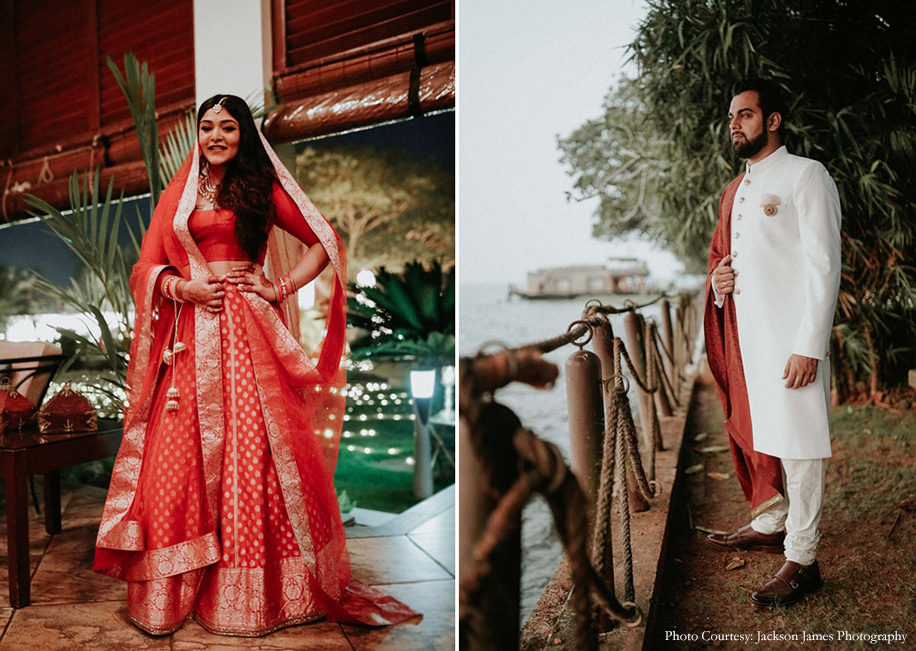 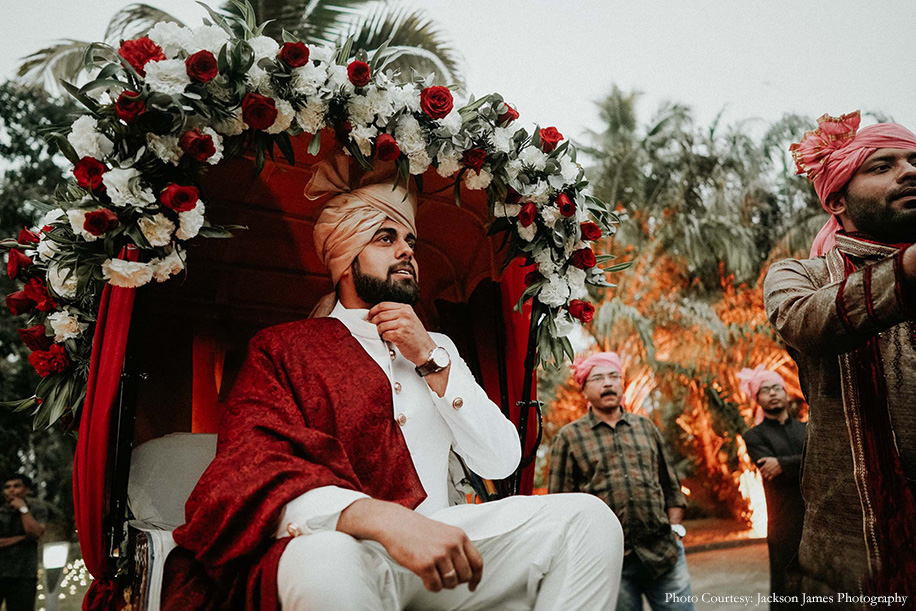 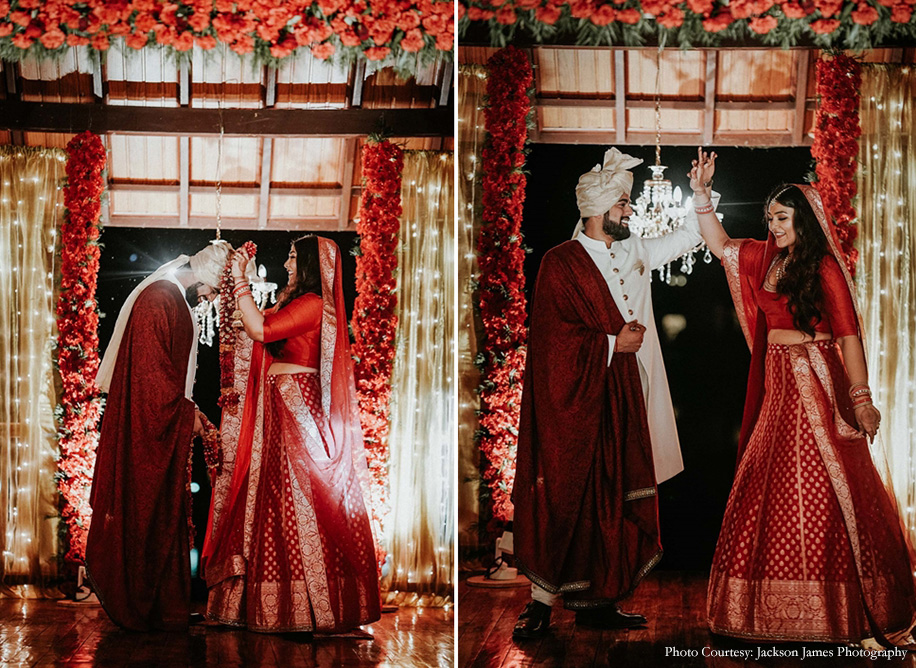 Pyjama Party
“Once we were done with the traditional wedding ceremonies, we really just wanted to let our hair down and do what we do best, have fun! So, Aditya and I decided to have a Pyjama Party where guests could simply be comfortable and make the most of the last party to conclude the wedding festivities. Our friends and families dressed up in matching pyjama-t-shirts from Aditya’s side and pyjama sets from my side. There were even some who came in their bathrobes. We danced all night and made great use of the mattress (part of the Pyjama Party decor) as a bouncy castle, celebrated till the wee hours of the morning. The décor included some fun elements, such as tents, flags, throw pillows along with the spring mattress that matched the theme of the party.”