A chopper, hot air balloon, chariot and a gondola were used to make dramatic entries to various functions at Ayesha and Dhairya's lavish wedding in Antalya, Turkey

“A soul mate is not found. A soul mate is recognized”, this quote by Vironika Tugaleva describes the fairytale story of Dhairya and Ayesha in the fewest possible words. A story this beautiful needed an equally enchanting setting to celebrate their union as man and wife.

A magnificent chopper, A gigantic yet dazzling hot air balloon, a chariot right out of an dreamy tale and a fairy light decorated Gondola, which was surrounded by numerous firecracker were used to make dramatic entries to various functions at Ayesha and Dhairya’s lavish wedding in Antalya, Turkey

Ayesha and Dhairya pulled off a traditional Indian wedding in the beautiful environs of the Rixos Premium Belek in Turkey. The couple shares how the gorgeous wedding included traditional accents, modern themes and unforgettable moments that were curated by Mr. Aanand Dawda and his team at Events N More. The wedding was captured by Wedding Sutra Favorite – 35mm Candids. 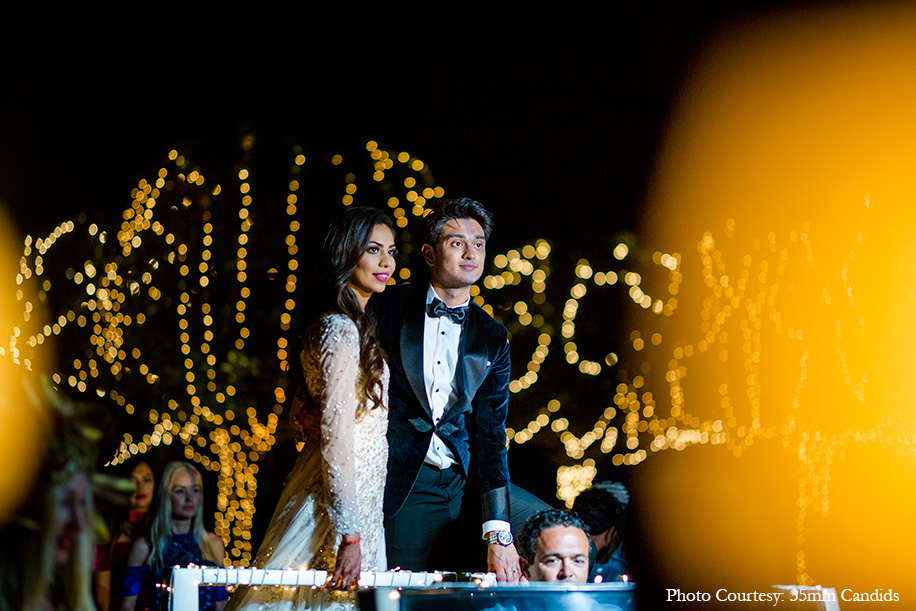 How They Met
The signs were always there but it took Ayesha and Dhairya a little longer to realize it. For starters, they were born in the same bed, in the same room at the same hospital in Hong Kong a year apart. They went to the same school on the same bus every day while being oblivious of what the future had in store for them. After school, they went on their journeys across the world exploring themselves. It took a few encounters all the way in Shanghai to realize that they were meant to be. While Dhairya comes from a Gujarati family, Ayesha is a Sindhi, so initially, they were a little nervous about breaking the news to their families. However, both sides accepted their relationship with open hearts and showered them with love and blessings.

Wedding Planning
Once the wedding dates were fixed, the Virani family got in touch with Mr. Aanand Dawda who is the founder and director of Events N More, a Mumbai-based event management company that has executed six weddings for the Virani family in the past, including Dhairya’s elder brother Smit’s wedding with Chandani in Muscat, Oman which was one of the most talked about weddings in Oman that year. Being a part of the family for such a long period of time Mr. Aanand understands the precise requirements and the taste of the family. Mr. Aanand thereby suggested Rixos Premium in Antalya, Turkey as the wedding venue. The hotel is situated amidst pine and nut trees forest alongside the Mediterranean Sea and has an uninterrupted 1,000-meter long sandy beach, a huge main pool, various smaller pools, large water bodies, several restaurants, gorgeous ballrooms and a pre-built show stage, a venue that could easily accommodate 700 plus guests and be a backdrop of over 12 ceremonies. Welcome and Pool Party
This was followed by a fun pool party whose theme was centered around lively Pop Art. The stage was set with huge rings as a backdrop marking the place for the ring ceremony. A rain dance setup along with a DJ Console ensured non-stop music and dancing. A large 3D signage spelled #Poptwist was set up at the entrance. With quirky quotes backdrop, colorful centerpieces, creative photo booths including an anti-gravity booth, bobblehead corner, foam pit, water jet performer, carnival performers, and open bars, the pool party was a hit with everyone!

Guests were gifted with a wacky pop themed shirt, tattoo sleeves and customized flip-flops to help them look the part. Dhairya and Ayesha made an entry in a chopper which impressed guests who popped champagne to commence the celebrations. Sangeet
The theme for the Sangeet was ‘Royalty.’ The event was held at the Dancing Waters area which had a beautiful fountain that moves to the rhythm of the music it’s synched with. The space around it was converted into a dance floor. Held under the starry sky, this event saw the couple make their entry on a hot air balloon. The entrance was marked with a huge red 3D letters that spelled #Royalty. Milky bulbs, followed by a layered square tunnel, added a beautiful glow to the ambiance. Instead of a traditional set, Ayesha and Dhairya’s Sangeet stage was the gorgeous Hotel Architecture as a backdrop on which Projection Mapping was done creating an unique effect that mesmerized the guests. Both families shared stories about Dhairya and Ayesha, which was followed by adorable performances by kids, youngsters and the elders alike. A 360-degree virtual reality photo booth ensured that the fun was captured from all angles. The soulful performance of Gurdeep Mehndi and his band added magic to the wonderful evening. 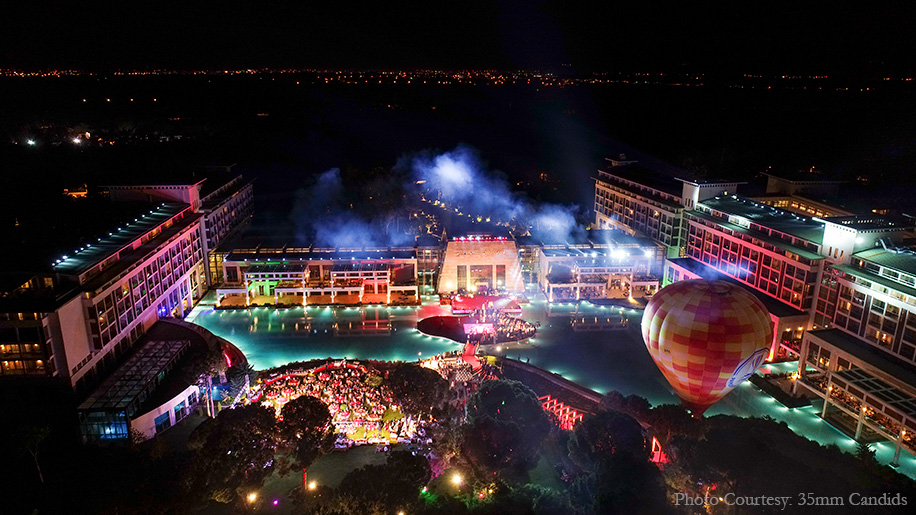 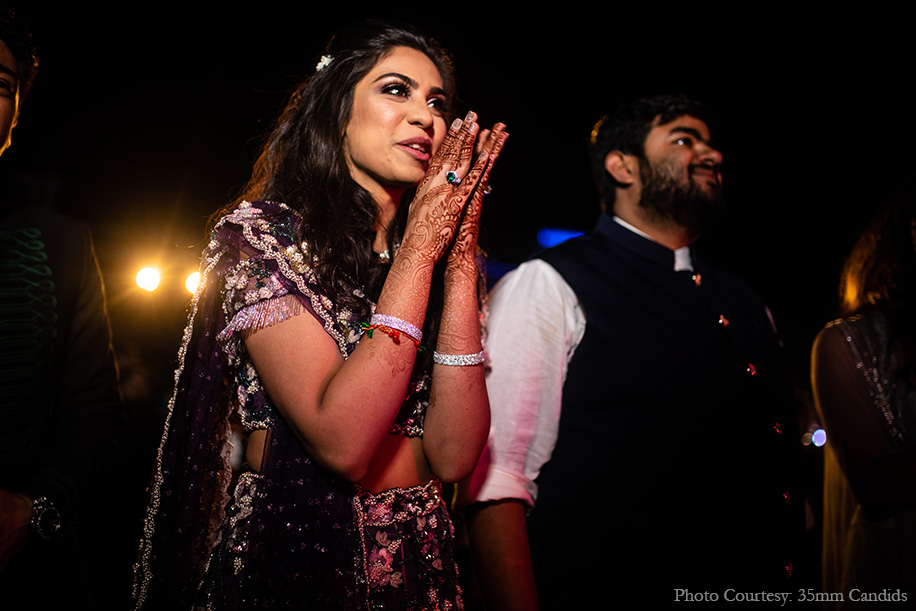 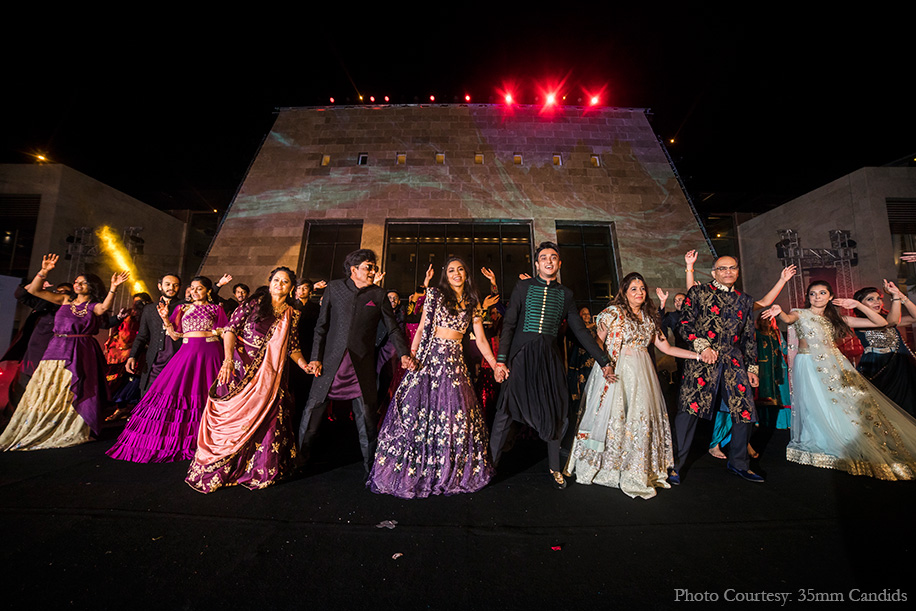 Mehndi
Being a day event, the Mehndi function had to be a colorful affair. The idea was an amalgamation of Turkish and Indian cultures. The venue chosen for the event was the Beach Lounge which is adjacent to the main pool, and as the name suggests, it faces the blue ocean. The entrance was marked with large colorful 3D letters spelling out #Turkishdarbar. The venue was decorated with Turkish and Indian elements. The couple entered the ‘darbar’ like royalty would – on a Chariot! Calligraphy artists who were booked for the event gave out customized souvenirs to the attendees. Belly dancers, Sufi dance performances, a special show by the renowned Dharini Thakker and her band were highlights of the entertainment. However, the beautiful musical performance by Ayesha’s family stole the show. 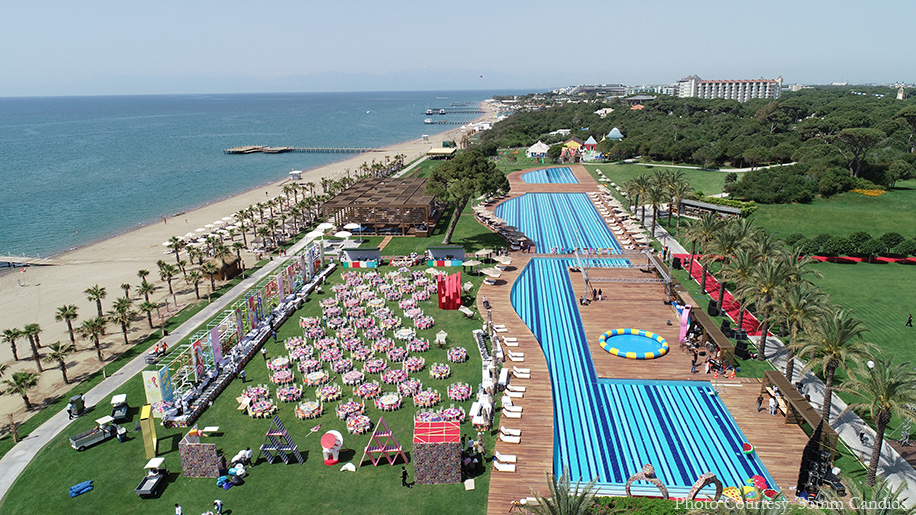 Musical Night
The ‘Musical Night’ offered entertainment and glamor in equal measure. The look was all about red carpet style, and both sides of the families came dressed accordingly. The ambiance at the venue was inspired by Glitz and Glamor, and even the stunningly decorated tables reflected that. The event saw power packed performance by Shibani Dandekar, followed by some Bollywood masala songs by Rodney. For the finale, well celebrated Singer Mika Singh regaled guests with his rocking performance, which had people dancing through the night. Wedding
The lotus flower has a deep meaning in several cultures – in some, it stands for purity, and in others it represents unity. For the wedding, the theme chosen was ‘Sterling Lotus’ which symbolized a magnificent unification of two souls in love. The wedding event began with the turban tying ceremony held at the pier, where Dhairya and his family made a stunning entrance in a Jetboat, from there Dhairya mounted on a horse and was accompanied by a royal baraat procession consisting of Nasik Dhol and Turkish performers including the famous Mahater Band. The lotus-shaped mandap was set up near the main pool facing the ocean. Ayesha made her entry on a Gondola and the moment of their Jaimala was lit up by fireworks from all around the pool to the starry night sky. The entrance had hashtag signage that spelled #Dvkbiwi decorated by a fairy light tunnel. Performers in glamorous attires entertained the guests before the wedding rituals commenced which included the couple chanting the wedding mantra. 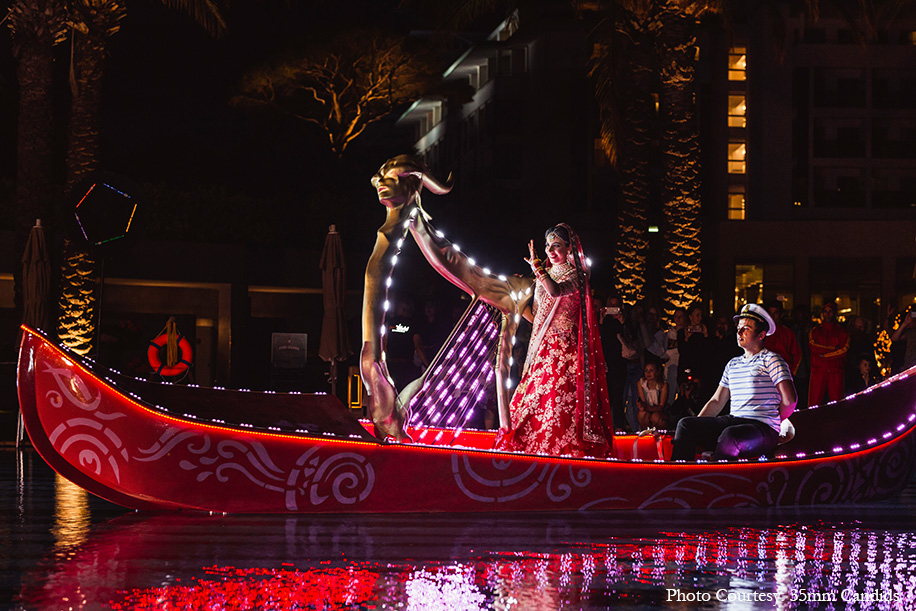 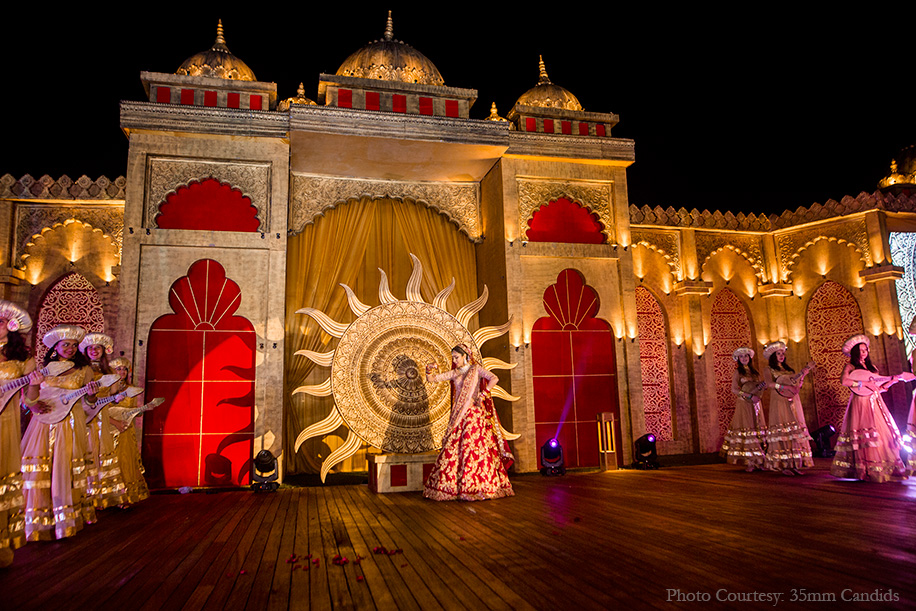 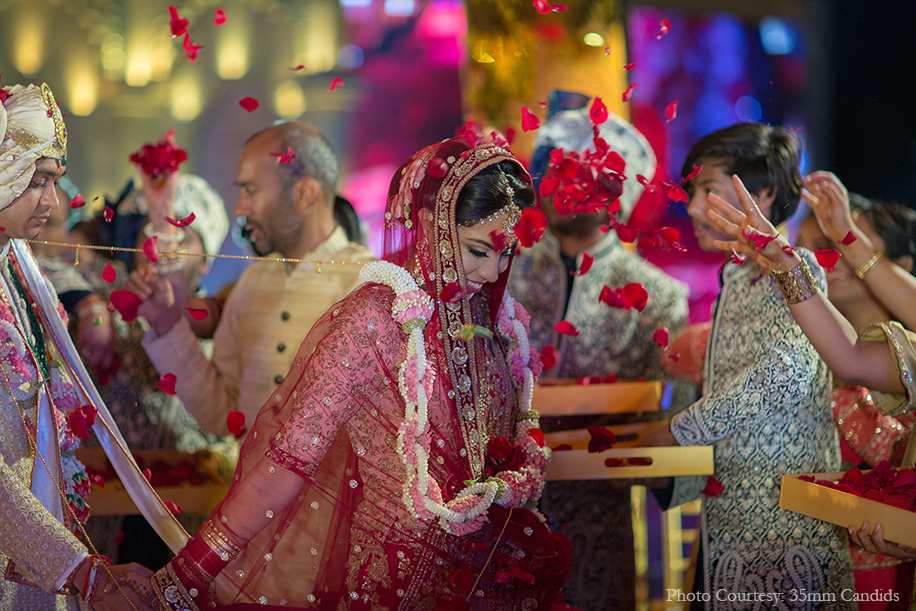 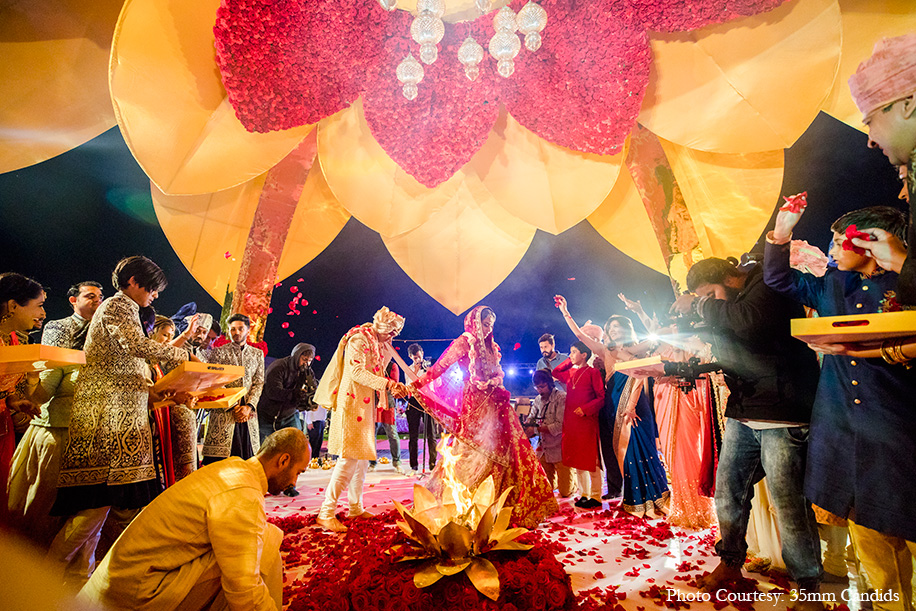