Dipal was born in Fiji and brought up in Taipei and Dhanesh was born and brought up in California. They met for the first time in Mumbai, where they were on a work trip, and hit it off immediately. The "made for each other " couple tied the knot in Renaissance Mumbai Convention Center, Powai.

Dipal was born in Fiji and brought up in Taipei, Taiwan where she was working as a journalist before marriage. Dhanesh was born and brought up in California and post marriage, the couple live in Castro Valley, San Francisco Bay Area where Dhanesh works in the family business, and also runs his own store ‘Mumbai Bazaar’. The duo were introduced to each other by their families after which they began exchanging emails which later moved on to instant messaging. They met for the first time in Mumbai, where they were on a work trip, and hit it off immediately. “We hung out for a week, but it took just two days for us to realize that the other person was ‘the one'”, says Dipal. 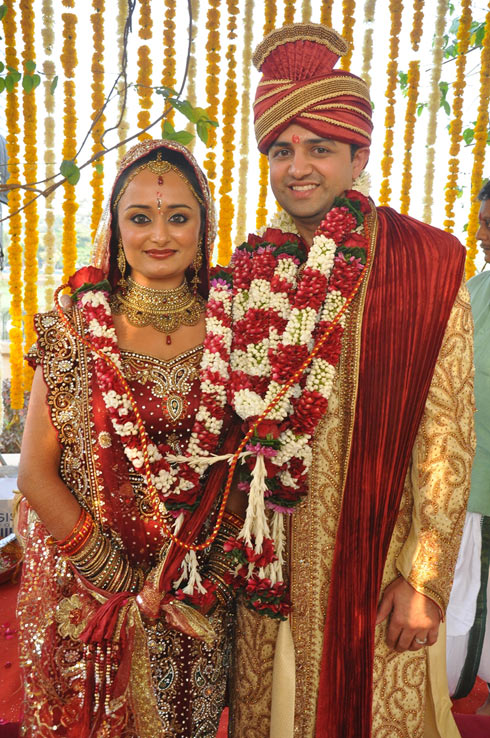 Initially both Dipal and Dhanesh wanted to get married in a resort in a hill station, like Lavassa and Mahabaleshwar, but ultimately they chose Mumbai as it provided everything they needed- great wedding vendors, familiarity with place and a convenient location for their friends and family. They zeroed in on Renaissance Mumbai Convention Centre & Hotel in Powai. Being situated next to the beautiful, picturesque Powai Lake, it provided a resort-like feel, away from crowded Mumbai. “We especially liked Gauri Point, which was the romantic, lakeside venue of our wedding ceremony. The hotel had multiple venues so we could have all our functions in a mix of both indoor and outdoor venues. The mehndi, wedding ceremony, and reception were outdoors. The pujas, sangeet, and after-party indoors”, says Dipal.

The couple hired Occasionz Unlimited to plan their wedding. Dipal explains, “With me being in Taiwan, and Dhanesh living in the U.S logistically it would have been difficult for us to plan a wedding in Mumbai. Sneha Tejwani of Occasionz Unlimited was fantastic. She guided us through the entire wedding planning process. Due to her past experience, she also brought to our attention things that we had overlooked or not considered, and had creative inputs as well. Her experience in planning weddings, along with her understanding of our vision was a wonderful combination in bringing our dream wedding to life. During the four wedding days, we felt relaxed and at ease knowing that she was there with her team to ensure that everything went as per our plan.”

Orange and Pink cabanas for Mehndi

The mehndi was held outdoors at the Velvet Lounge and Lawns. The decor featured bright pink and orange cabanas with golden divans as seating, where mehndiwalis put mehndi on the guests. There was a separate bridal cabana done in purple and pink with white flowers and the guests were treated to a spread of delicious chaats. There was also a lac bangle counter, which had chudiwallas making bangles to match the outfits of the guests. It was the first function and a welcome for all the guests, and the idea was to have a colourful and relaxed set-up and get everyone to mingle. 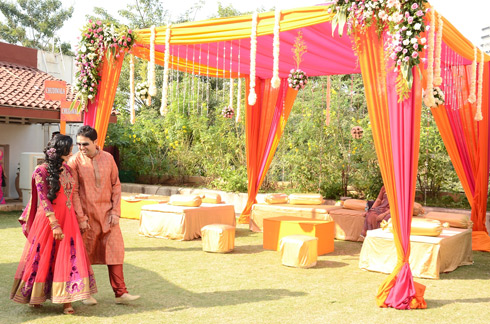 The sangeet was held in the Grand Ballroom with a red and gold theme and a touch of white florals. The evening started off with performances to Bollywood songs by family and friends, depicting the story of how the couple fell in love. A bhangra troupe livened things up with their dance performance and dhols, and added a surprise element to the sangeet. The food was a fabulous spread of Indian, continental and Chinese dishes. 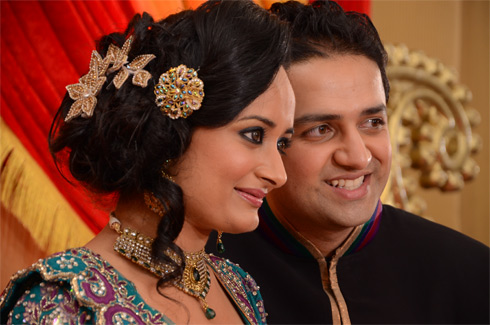 The bright and beautiful traditional wedding ceremony was held outdoors at Gauri Point, with the mandap at the edge of Powai Lake. The entire decor consisted of yellow marigolds and white flowers, with hints of gold.The entrance was a marigold curtain with urlis and a Ganesh statue. 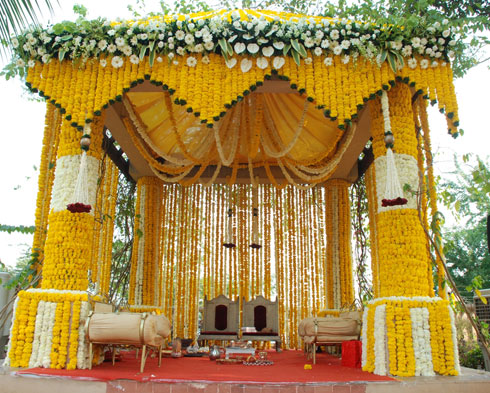 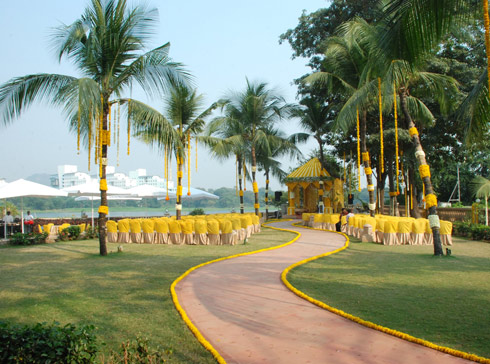 The groom entered on a chariot drawn by four white horses, accompanied by a lively baraat dancing all the way to the beats of Nashik dhol wallas, bhangra dancers and trumpeters. There was also a bit of garba before the baraatis were welcomed into the wedding area. The bride entered with a bhangra procession and trumpeters. A shehnai troupe, including shankh and bells, provided melodious music as the couple performed all the wedding rituals, from exchanging jaimalas to taking pheras under the canopy of marigolds. 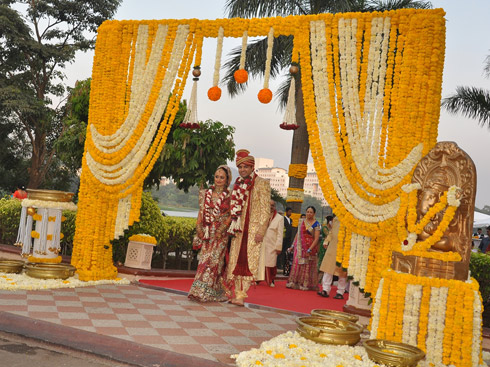 The colour scheme for the evening reception was blue and silver with pink and white florals. It was held outdoors in the Terrace Gardens, overlooking the Powai Lake. The focal point was a stage with a backdrop of crystals and flowers. Life-size portraits of the couple were put up in the entry way leading to the Terrace Gardens. The cake cutting was followed by the popping of champagne. To entertain the guests, ‘Harmony with Hasmukh’ the live band played classic Bollywood tunes. There was a lavish buffet with lots of live stations, an array of desserts, and the delicious spread that the Renaissance Hotel is so well known for. There was also a guestbook with photos from all the other wedding functions, which guests signed with their personal messages for the couple. 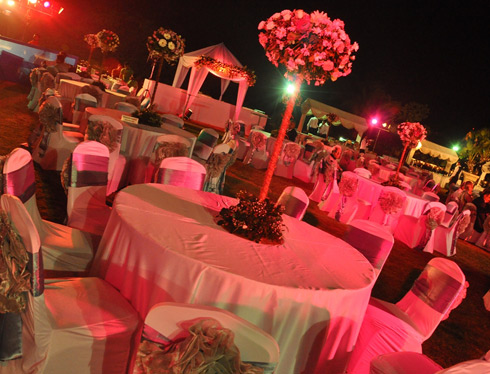 The reception was followed by an after party with a DJ in the Ballroom. Says Dipal, “Dhanesh and I enjoyed dancing the night away with all our friends and family.”

Our Recommendations and Advice

Says Dipal: “Sneha and her team at Occasionz Unlimited did an excellent job planning our wedding. They were available whenever we needed them and went out of the way to make sure our wedding was exactly the way we wanted it to be.”