Edna and Jurgen from Austria chose India to make their 9 year bond official. Edna always wanted to get married close to her roots and Jurgen wanted to experience the Indian culture, so the first destination that came to the couple's mind was Royal Rajasthan.

Edna and Jurgen from Austria chose India to make their 9 year bond official. Edna always wanted to get married close to her roots and Jurgen wanted to experience the Indian culture. So the first destination that came to the couple’s mind was Royal Rajasthan. Though Rajasthan offered ample Princely forts, they were hooked on to this property for the tranquility and the vast courtyards and verandas adorned with antique elements and Rajputana heritage. Fatehgarh fort stood aloof on the hill top, a lone marvel among the piles for them. 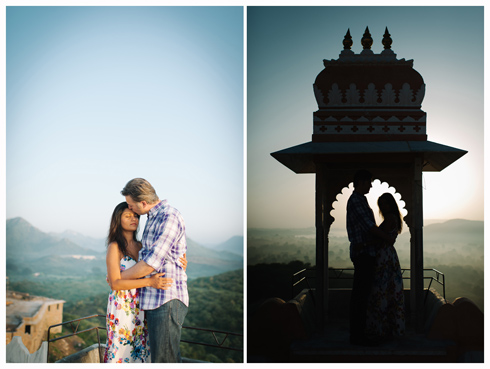 Day One of the wedding celebrations started with a city tour including a visit to the beautiful Shivniwas palace and Jagmandir Island Palace. Pichola boat ride offered not only the best view of the city, its mountains and its historical places that dotted the lake, but also the most relaxed atmosphere for both sides of the families to get together and unwind. 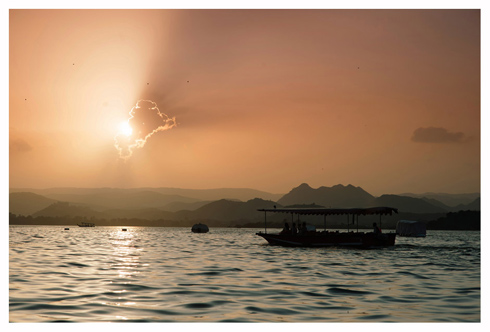 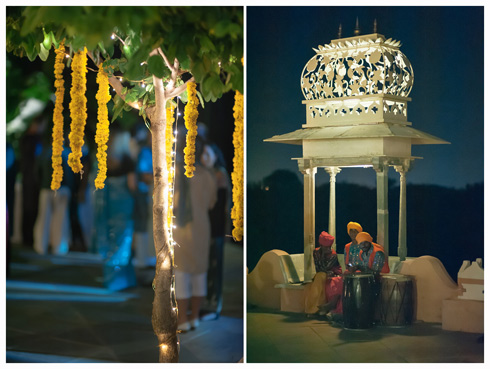 Edna and Jurgen exchanged their wedding vows near the beautiful lower swimming pool of the property overlooking the hills. To add the Indian touch to the Christian wedding, Jurgen entered the property on an ornamented elephant along with the traditional baraat and dhol walas. The best of both cultures came together as all the Austria men tied safas. The theme colors of the wedding were white and lemon yellow with hints of gold and ice blue. The bridal pathway and all the stairways were decorated with white and yellow flowers. White and yellow pompoms and flowers were hung from the pool side trees where the couple exchanged their rings and wedding vows. Elegance for the Reception

A white themed reception by the upper swimming pool side followed just after the wedding. White chrysanthemums and gladiolus found theirs ways on the centers of candle lit tables elegantly perched on the golden frames. The beautiful three tiered white cake was cut by the couple as fireworks painted the night sky bright. After the speeches and first dance, the dance floor – illuminated with spot lights and disco lights, proved inviting to the guests who danced till early morning hours with the DJ belting out hits one after the other.