Mitali and Gaurav's wedding happened in Bangkok - the city of dazzling temples, beautiful palaces and the floating market. Bangkok fitted the bill perfectly because in the month of December, that was the best place to be in.

Mitali and Gaurav’s wedding happened in Bangkok – the city of dazzling temples, floating market and beautiful palaces. They wanted a destination wedding and were looking into a lot of options. Bangkok fitted the bill perfectly because in the month of December, that was the best place to be in. They chose Millennium Hilton Hotel for their celebrations as it offered a breathtaking city view. 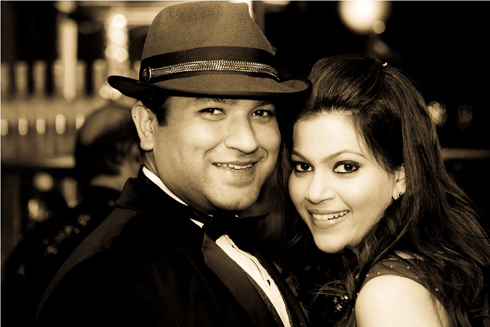 Masquerade party for the Cocktail

Mitali says, “The theme of the cocktail was Masquerade party so we had all the props like feather masks, mystic masks, stick masks, hats; the decor also had that mystic quality to it. We used lot of glass trinkets and light play to make it interesting. It was organized in the rooftop restaurant from where you could see the whole skyline of Bangkok making it all the more mesmerizing.” 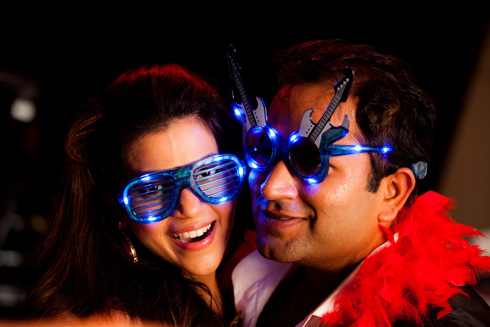 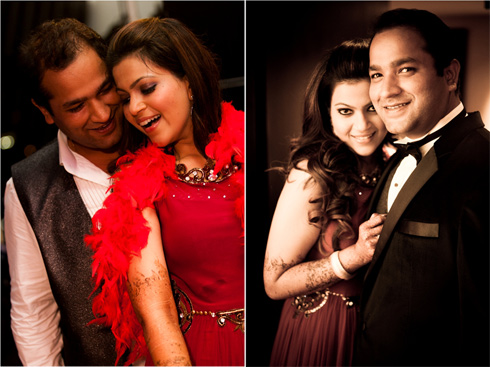 Mitali wore a magenta and black gown by Sonia Goyal and Gaurav wore a tuxedo by Paresh Lamba.

To merge the two cultures, they kept the feel of Mehndi very ethnic with a twist of Bangkok’s flavor. Mitali says, “We used lot of flowers for Mehndi as Bangkok is famous for its flowers. For the guests, we had arranged for Thailand style armlets for the local aura. We had live singers to keep the guests entertained. The giveaways included bangles, toe rings, payals.” Mitali went for a lime green and pink gown for her mehndi that she designed herself and Gaurav wore a Kurta pyajama with Nehru jacket by Paresh Lamba. 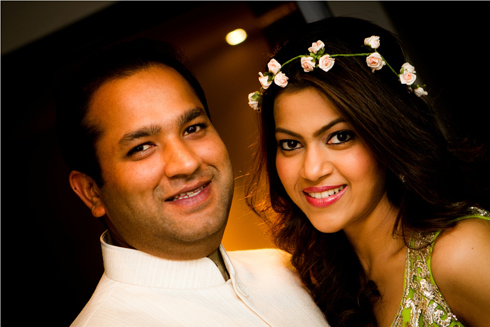 Mitali says, “The Sangeet was held in Peninsula Hotel opposite Hilton in their banquet hall. We used a lot of flowers here too along with blue drapes. The evening started with pujas for both of us followed by performances by the family members and then the DJ brought the house down. I wore an orange Sabyasachi lehenga and Gaurav wore a bandhgala by Paresh Lamba.” 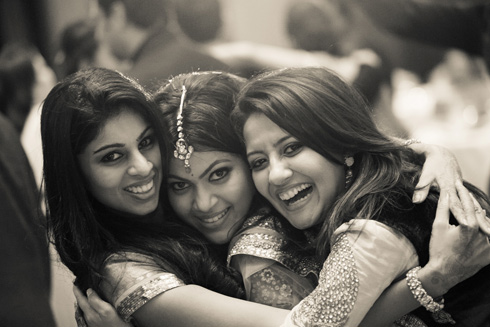 Red and White for the Wedding

The Wedding was arranged by the lake side and was a complete outdoor event in the night. Mitali says, “They had these water bodies in the premises where they created the mandap for us. The mandap had red, white and gold in it. There was abundant use of flowers again. The baraat came in vintage cars. Instead of the usual band, the baraat had a DJ who belted popular numbers. And Thai people in Indian dresses carried the lamps alongside. Just before the pheras some Thai dancers put up a stunning performance. I wore a lehenga by Jade and Gaurav wore a Sherwani by Sabyasachi.”