#TheJollySidhus Poonam and Kiranjit got married at Le Meridien Beach Resort, Phuket, Thailand. This is how they celebrated.

When they finally met in 2010, at the Bhangra Empire, Poonam and Karanjit (KJ) discovered they’d crossed paths for five years and never met! She lived down the street from him when they both moved to Palo Alto and in 2006, Poonam was standing right behind KJ in a queue to take a picture with Malkit Singh. KJ got the last photo of that fateful night and Poonam never lets him forget it! 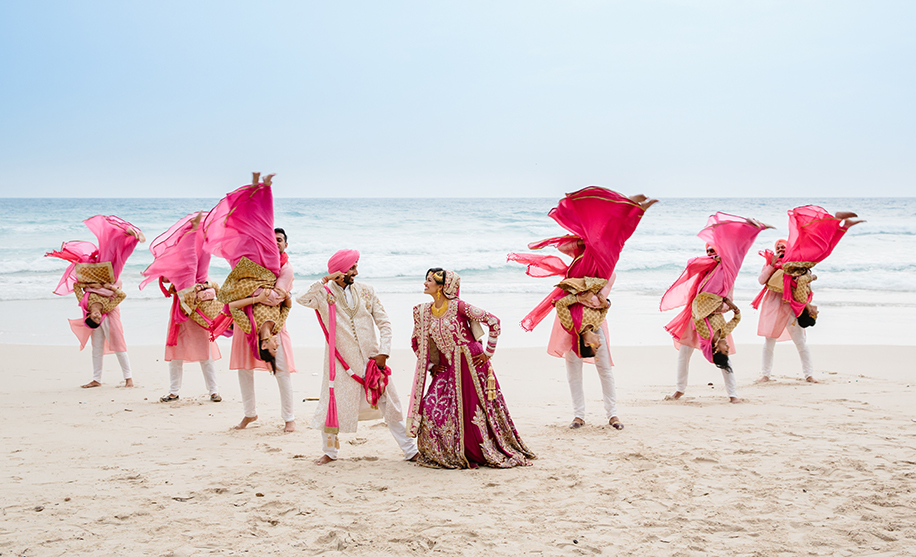 Wedding Venue
The couple wanted to spend the most important week of their lives with the people who mattered most to them, in a place that felt like paradise. Their first trip together was to Thailand and so it seemed apt that they share that slice of paradise with their loved ones.

Their critical ‘must-haves’ were: a wedding with a beautiful beachscape as the backdrop, proximity to the nightlife, temples and tourist attractions for all their guests, a Thai resort that embodied Punjabi hospitality, great food and a venue that ensured guests ran into each other every day.

Poonam and KJ scouted around but found nothing quite like Le Meridien and their parents liked it as well. The architectural layout meant guests had the chance to mingle by the pool, at breakfast, in the restaurants… it also showcased the stunning private beach, flecked by rocks and cliffs. (An excellent backdrop for the wedding photographs too!)

In the months leading up to the wedding, the couple’s almost daily interactions with the resort’s executive management were warm, with Le Meridien being extraordinarily accommodating and patient through the planning process. Across discussions on menus, ballrooms, rentals, they worked closely with the couple to create a beautiful week of festivities and were hospitable towards the guests. Chef Raju created a delicious smorgasbord featuring Indian, Thai, Italian, American, Mexican cuisines! Themes from their story, from their serendipitous meeting to their Bollywood flashmob proposal at Disneyland – were elegantly revisited via the ‘Agrabah’ sangeet and the ‘Happily Ever After’ royal ball/reception – all the magic, fun and fairy-tale feels intact.

The Sangeet – “An Evening in Agrabah” was brought to life with peacock feathers, genie lamps and elements of Morocco. The menu that evening featured cuisines from Mexico, India and Thailand, included a live-nacho station and gol-gappa bar. 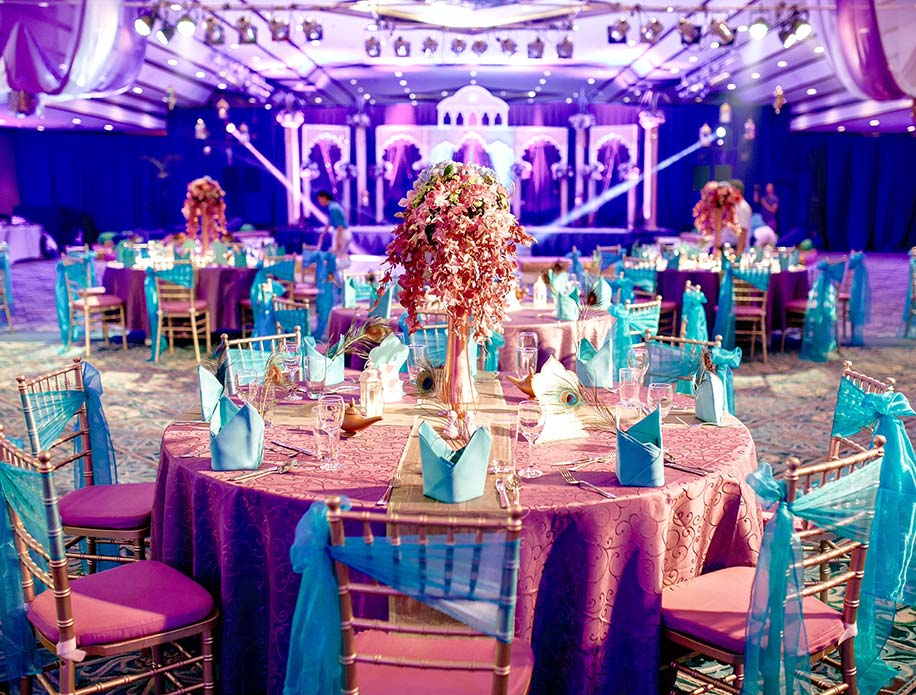 While most of the ceremonies were held in tandem, the couple’s Batna and Chooda ceremonies were kept separate. KJ’s Batna was a pool party with mehndi artists and masseurs for the guests – a fun, fresh twist on pre-wedding functions.

Poonam’s Batna and Chooda ceremony was held during the day. Manicurists and mehndi artists were in service and the menu featured an international barbeque. The bride chose the décor for both celebrations; Carolina blue for the groom, in honour of his alma mater and also his favourite colour and saffron and yellow for herself. 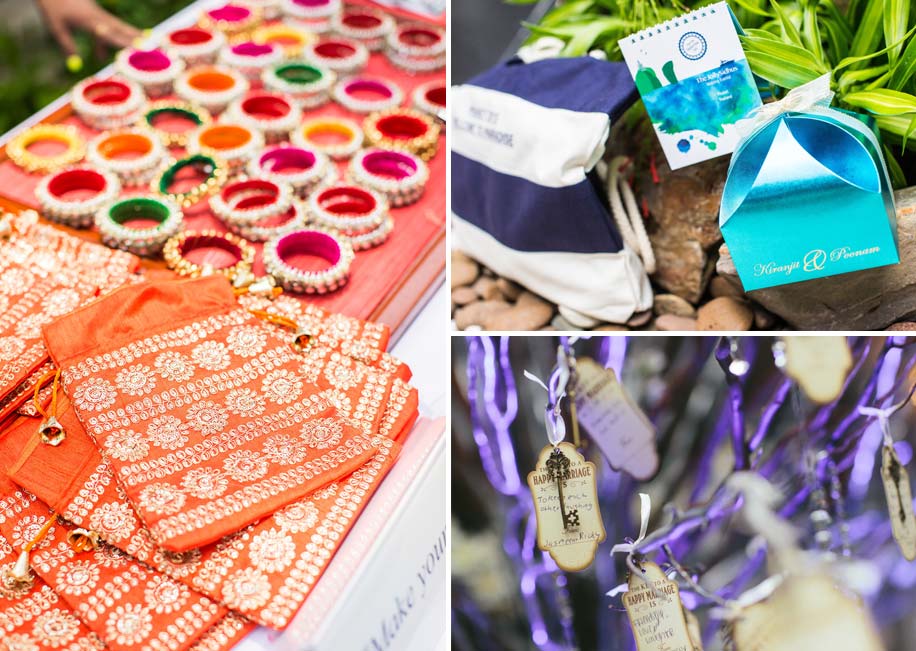 The wedding day included both Sikh and Hindu ceremonies to honour both sides of the family. Poonam’s love of pink is one of her best known traits so the day was themed ’50 Shades of Pink’ and festooned with hues of pink across the décor including fans, parasols and even the rumaals for the Anand Karaj. 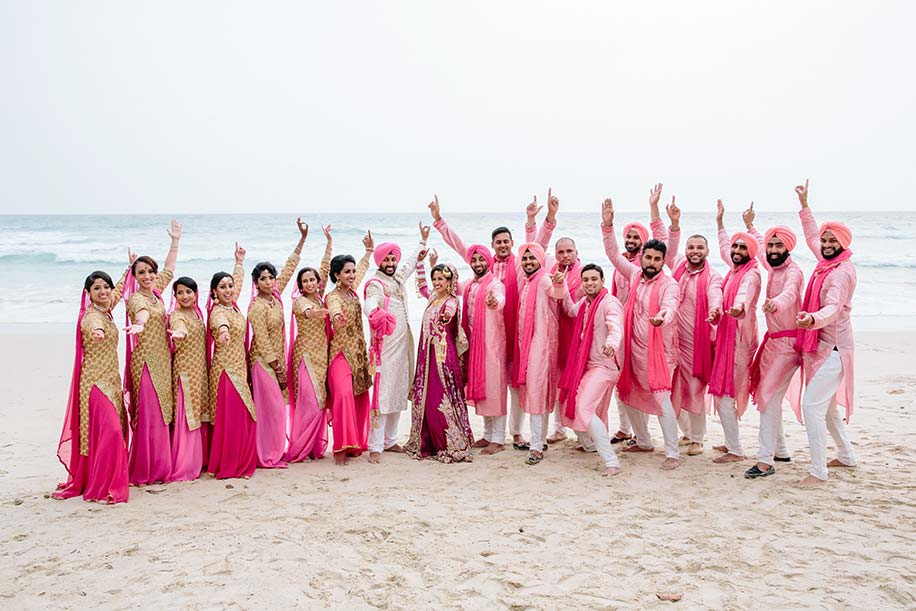 The Sikh Anand Karaj featured the traditional floor seating under a light canopy with fans and water to provide relief from the Thai sun. It was conducted in accordance with the Granthi Ji, ensuring absolute respect to the Guru Granth Sahib, as the bride made her entrance, a light drizzle brought sparkle to the sunlight. After the Sikh wedding, guests were treated to a vegetarian, traditional Indian lunch – Makki di roti with saag, Chole Bhature, Kadhi Pakora, Paronthe – a lovely nod to the couple’s Punjabi heritage.

The rain delayed the Hindu wedding by an hour while Neha and her team expediently changed the setting to a traditional mandap with Chiavari chairs, petal cones, and parasols.

As the bride made her second entrance to ‘Ek Ladki Ko Dekha’, the drizzle turned into a downpour that would last the entire ceremony. Stressful at the time, in retrospect, the rain added a certain poetry to the moment, like a benevolent blessing and a great story to tell! Incredibly, not a single guest retreated from the rain – each and every person sat through the downpour as the couple was wed – truly heartwarming.

After a photo shoot on the beach, guests had dinner, followed by the traditional ‘shoe negotiations’ between the ‘Saalis’ (bridesmaids) and groomsmen. The day concluded with the bride departing on a Paalki carried by her brothers, as guests lit sparklers for her send-off. 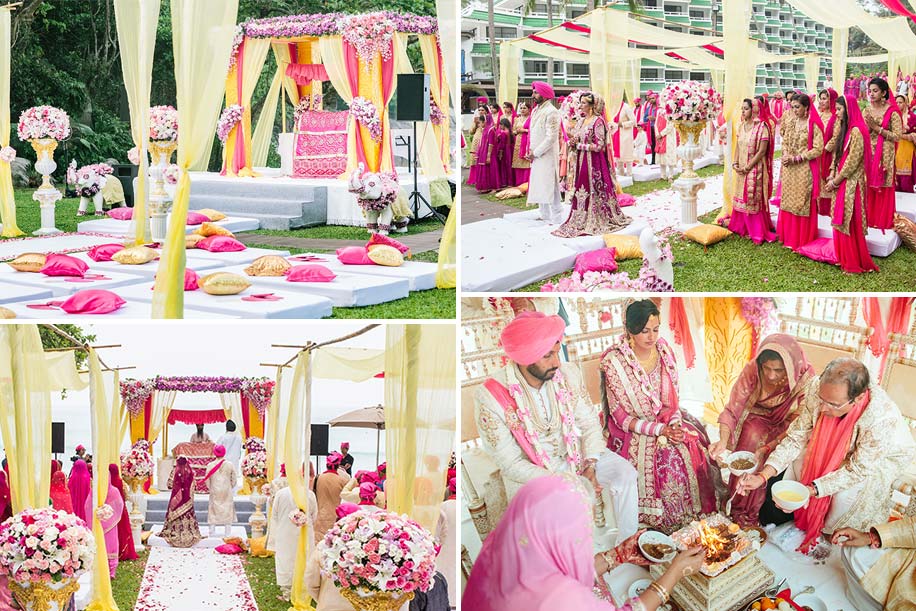 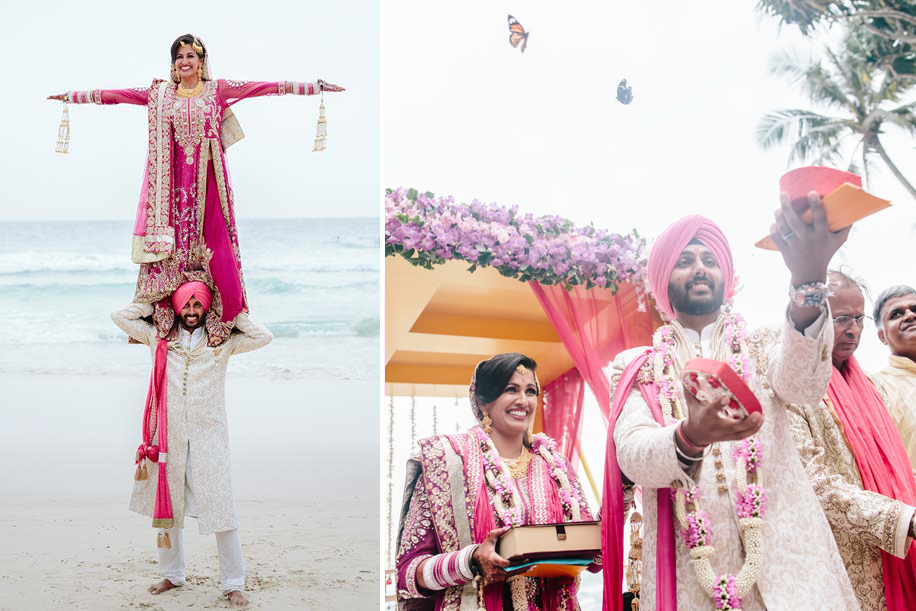 The reception, ‘Happily Ever After’ was a magical ‘Royal Ball’. Quotes from fairytales were put up, each guest received a masquerade mask, the ballroom was decorated in gold, rose-gold and accented in dark blue velvet.

Since Bhangra Empire played Cupid, the evening kicked off with an exclusive performance by the couple’s friends from Bhangra Empire. The newlyweds made their entrance during the performance! And, to honor that first missed the meeting, Mr. Malkit Singh himself made a surprise appearance at the end of their beautifully choreographed first dance and kept guests on their feet until 3 am! 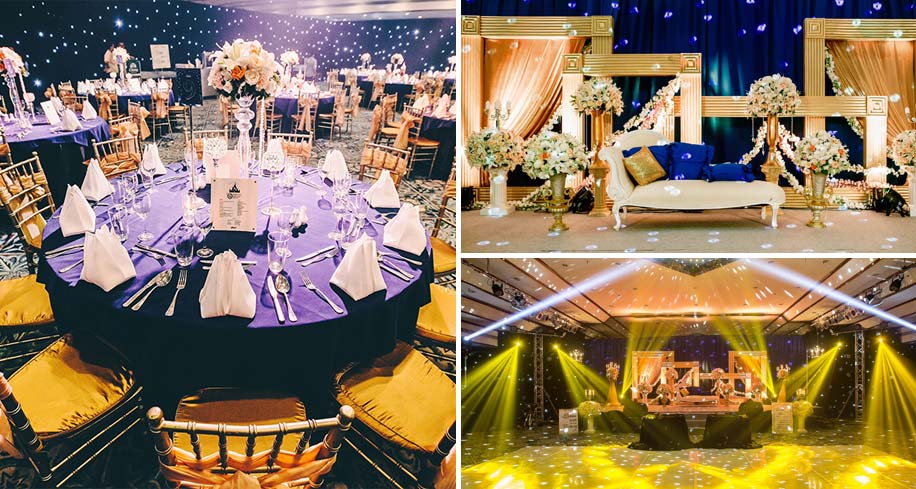 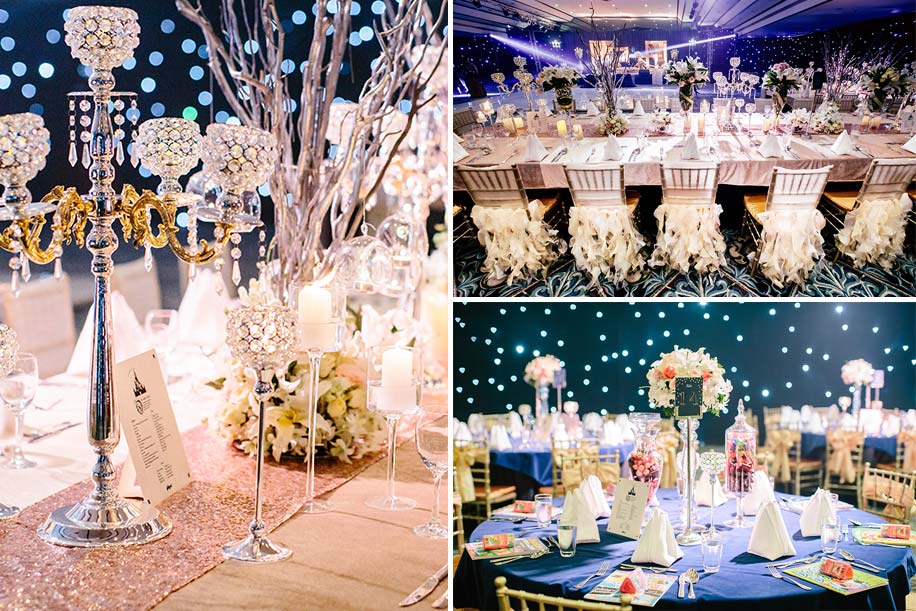 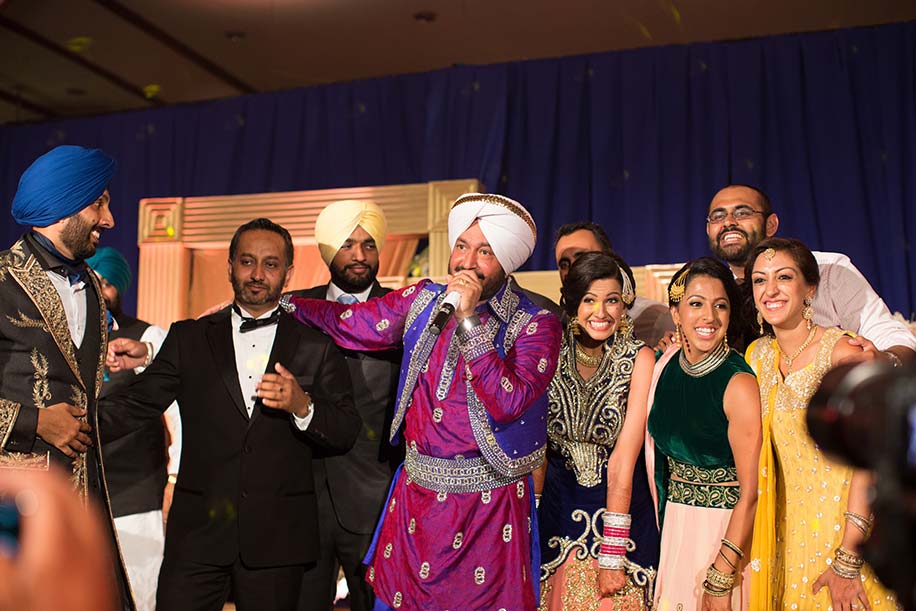 The wedding cake, topped with miniature dolls dressed as Poonam and KJ at their first bhangra performance together and in their reception attire, featured a palette of flavours – tahitian vanilla, passion fruit and devil’s food chocolate. 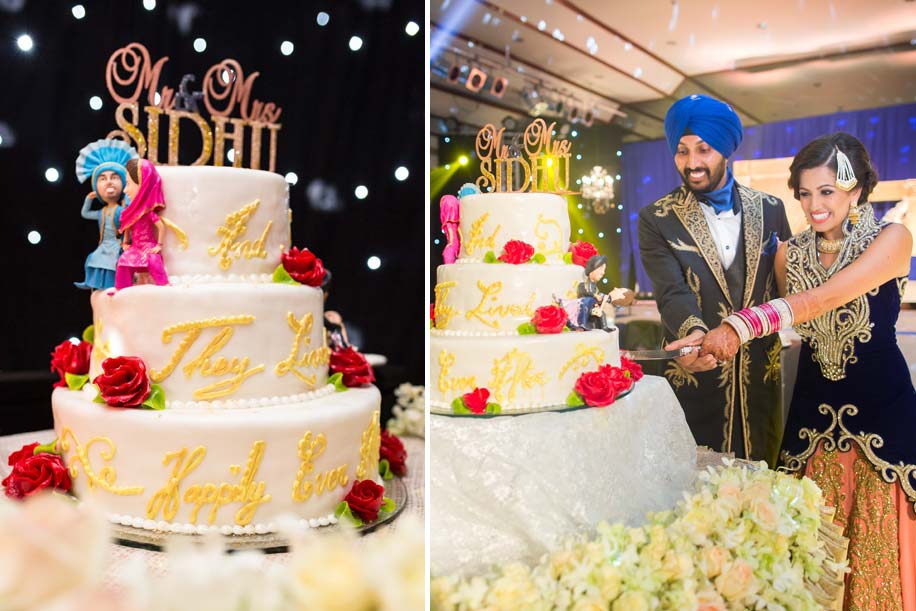 The menu featured Indian, Thai, and Italian cuisines – including a live noodle station, hot jalebis fried on the spot and Kathi rolls served late at night (to recharge after a night of dancing!)

Poonam and KJ, keen their guests see the splendor of Thailand they fell in love with after their first trip to the PhiPhi Islands, had Neha and the FWP team organize a fantastic trip. The morning after the reception, 178 guests boarded onto speedboats and had a day-long sea-excursion to five different islands and a picnic lunch on Bamboo Island.

The Wedding Makers
Most vendors at #TheJollySIdhus festivities were referred by Neha and the Foreign Wedding Planners team. Each vendor was impeccably professional and met the highest of their expectations. All decor, setup and airport transfers were arranged by FWP.

Simran Takkar and her team were in charge of hair, makeup, Mehndi for the bride, bridesmaids and family and went above and beyond to provide hairstyling and Mehndi for all the ladies attending the wedding festivities.

The i2 team handled all cinematography and photographs – and the results are of a high caliber!