A road trip and a trek in the mountains of Croatia was the prelude to Mahek asking Rajvi to marry him.

With a history of natural beauty and adventure intertwined into their romance, the couple’s wedding was a dreamy affair in the verdant hills at the JW Marriott Mussoorie Walnut Grove Resort & Spa.

Spectacularly catalogued by WeddingSutra Favorite – The Photo Diary, here’s how the ceremonies unfolded. 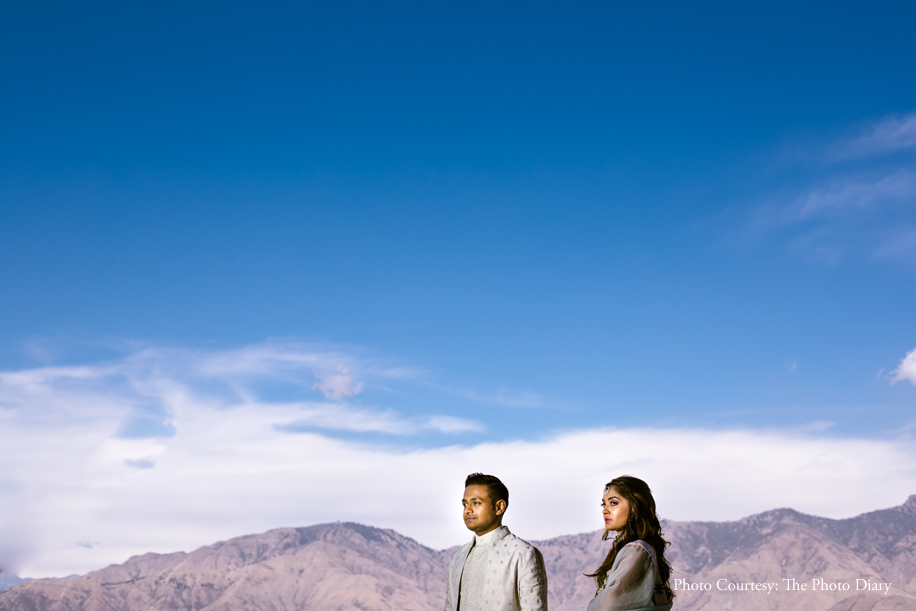 How They Met
About 4 years ago, Mahek and Rajvi met via a common friend. Chance meetings interspersed with radio silences led to a sudden realization for Mahek – Rajvi was the one!

They started talking, went out on a few dates. After multiple meetings, movies and even him crashing her family holiday in Dubai, Mahek had to confess to Rajvi how deeply in love he was with her. 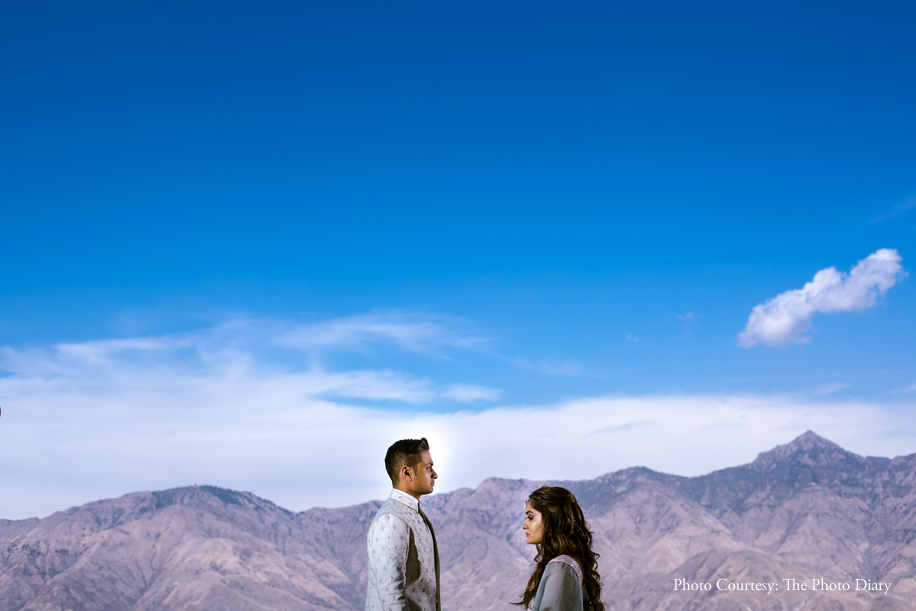 The rest, as they say, is history!

The Proposal
Rajvi loves the mountains and so Mahek planned a trip to Croatia. The couple went on a road trip into hilly terrains and then trekked through lavender fields to one of the highest spots in Croatia. As the sun began to set, Mahek went down on one knee, Croatia’s most gorgeous panorama as a backdrop, and asked Rajvi to be his wife.

Wedding Venue
Tucked away in the rolling hills of Mussoorie, mists weaving in and out of dense forests, the JW Marriott Mussoorie Walnut Grove Resort & Spa is a dreamy canvas for a wedding. The hotel’s huge windows make every spot within a vantage point to enjoy the views while its lush lawns and opulent banquet spaces provide ample opportunity to host guests. The choice of venue for the wedding was perfect. Welcome Dinner
A huge bonfire roared its welcome as the festivities began with dinner on the rooftop. Sparkling with thousands of fairy lights, the area festooned with tents and smaller fires to keep away the cold. A huge buffet of lip-smacking North Indian delicacies including a live tandoor. The night was a warm celebration of love and companionship.

The Arcade after-party
The hotel’s arcade zone is called ‘The Den’ and was perfect for an after-party.This was a night of fun, games, surprise performances by the groom and his friends, and glow-in-the-dark ball pools. The guests played beer pong and other arcade games before downing innumerable shots! 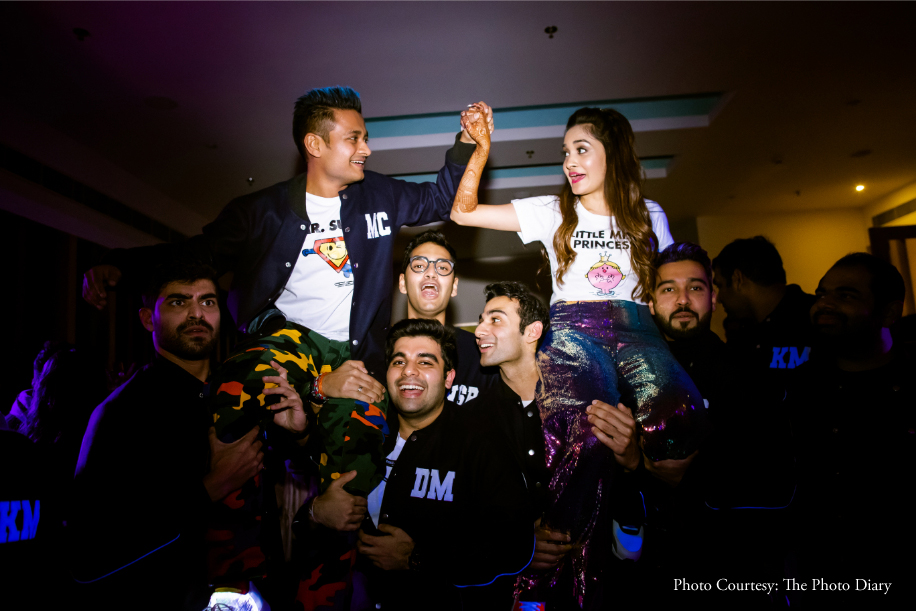 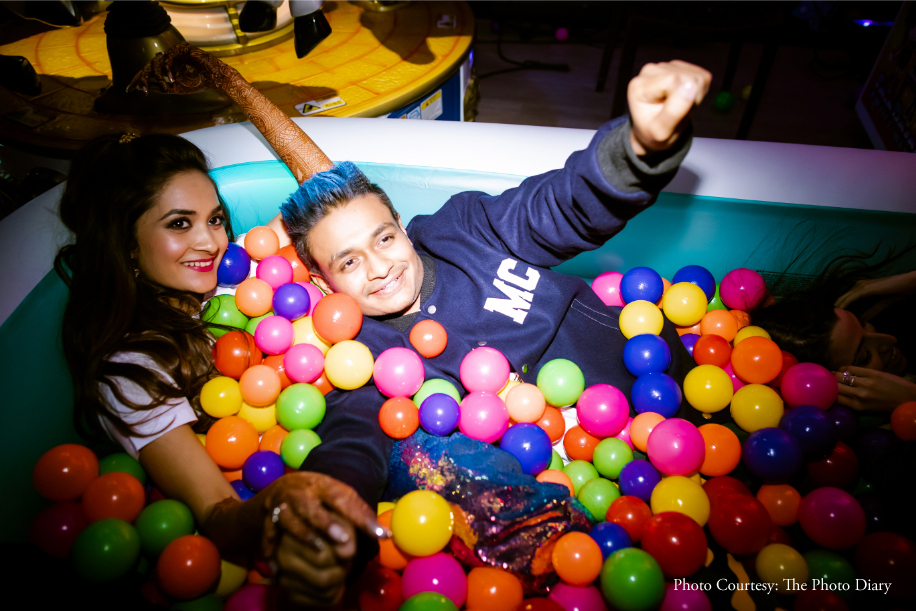 Mehendi
The backyard was perfect for the Enchanted Garden theme of the mehendi ceremony. Featuring a pastel palette, the area was filled with storybook shelves, mailboxes to leave sweet notes for the bride and groom, a life-sized Jenga and hopscotch set-up, gigantic flowers, picnic tables and a stage set for brilliant performances with the backdrop of those mesmerizing mountain ranges.

The vibe was relaxed. Champagne, sangria and some beer added a cheerful and relaxed vibe. Famed singer, Taaruk Raina performed some of Rajvi and Mahek’s favorite songs and the party felt like a music festival in an exotic locale. 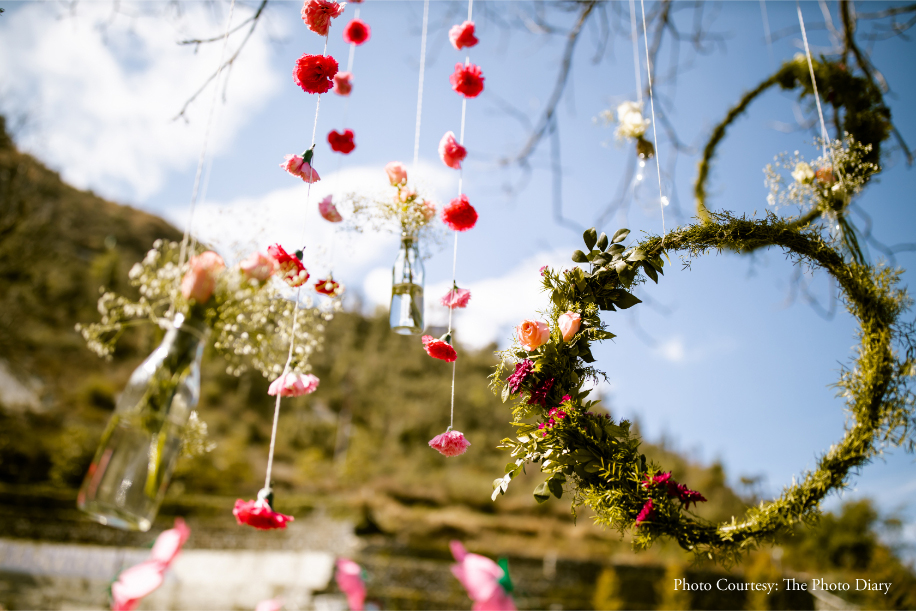 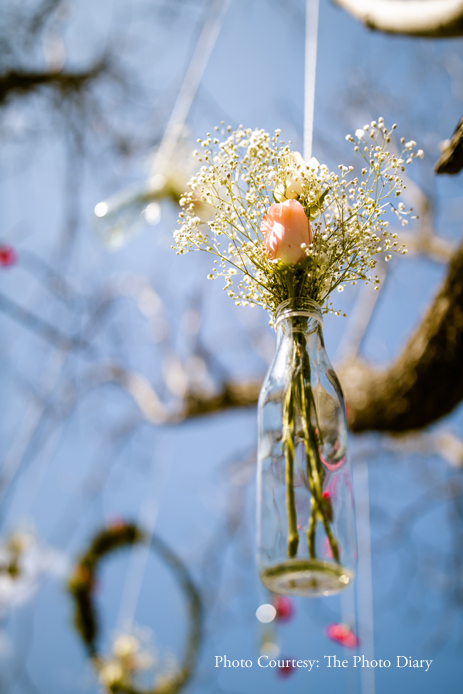 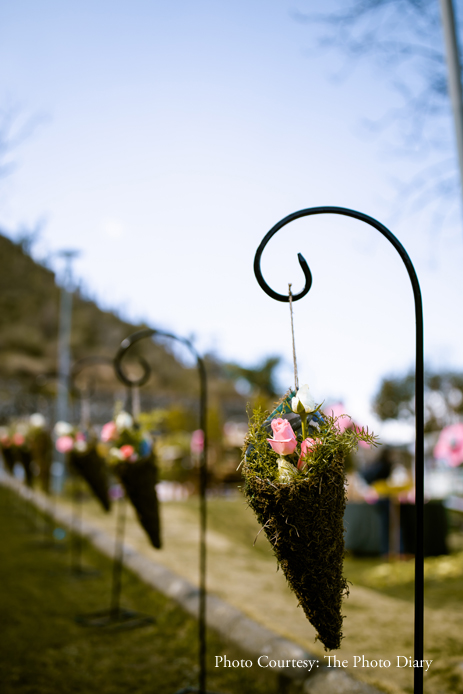 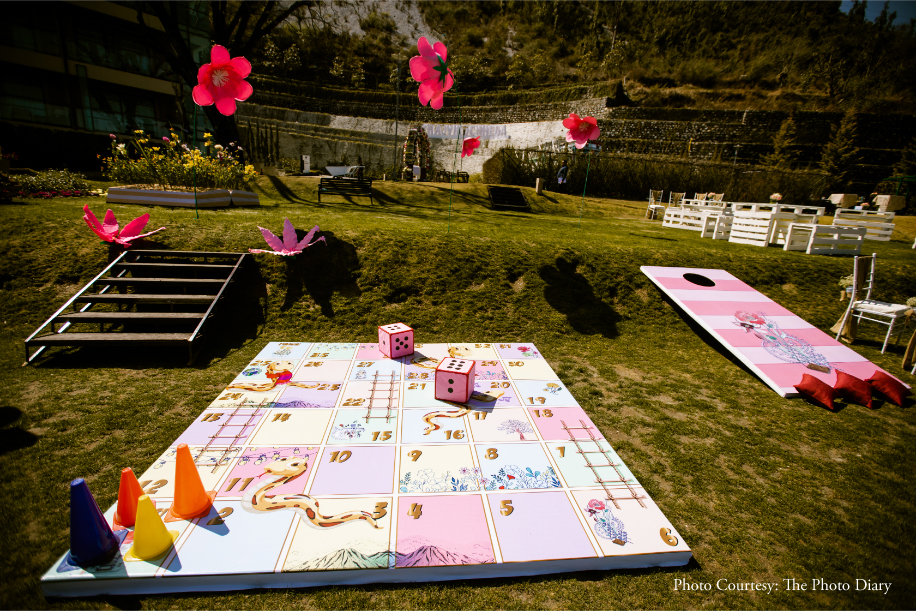 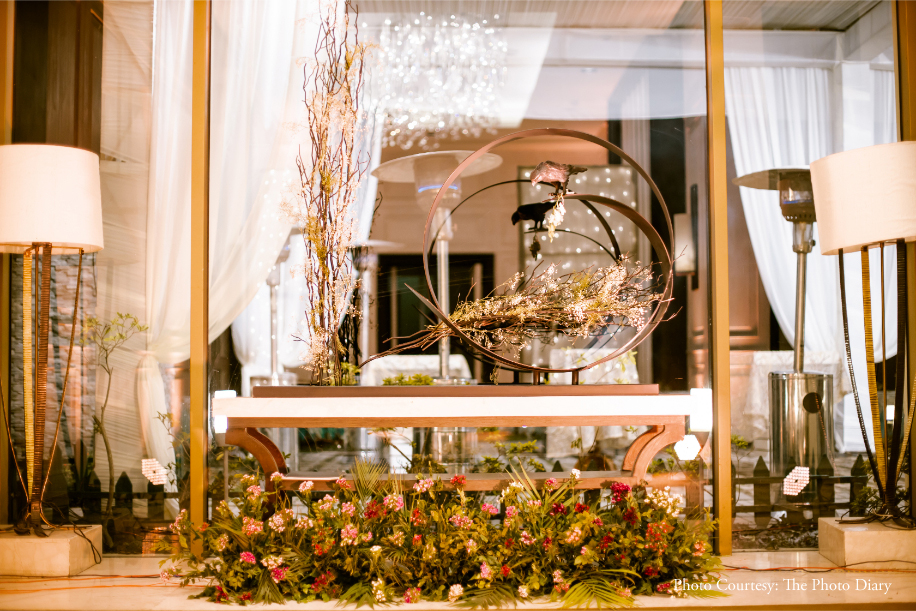 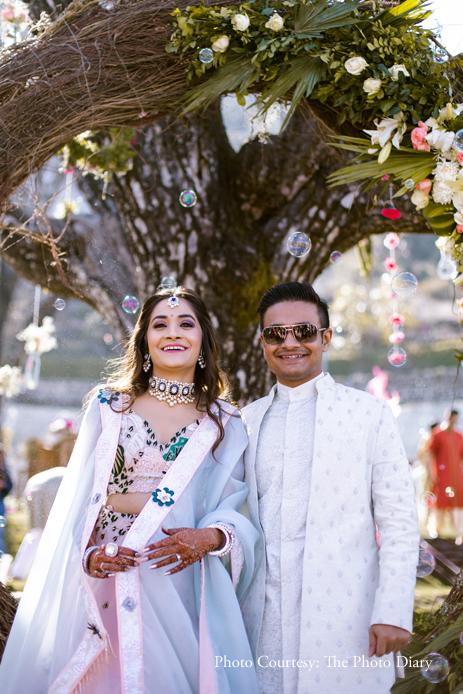 Sangeet
The hotel’s sprawling banquet hall was perfect for the Sangeet celebration. The venue had its bling on – mirrors, a bar decorated to look like a carousel in gold and lots of festive touches – it made for a fitting stage for the spectacular dance performances put up by both sides of the family. Singing sensation Aaryan Tiwari belted out popular Bollywood hits that made the crowd go crazy. The guests truly had an exhilarating time at the sangeet, as is evident in these beautiful moments captured by The Photo Diary.

Wedding
The hotel’s lawns were the perfect canvas for the wedding ceremony. The décor in shades of pink and gold, made the function look dreamy. The mandap was open to the sky, the couple bathed in the dappled light that filtered through the canopy of the walnut trees. The baraatis arrived with the groom riding an ATV. The father-of-the-bride escorted his lovely daughter to the stage for the varmala to the mystical sounds of mantras played by DJ Vicky from Kolkata. 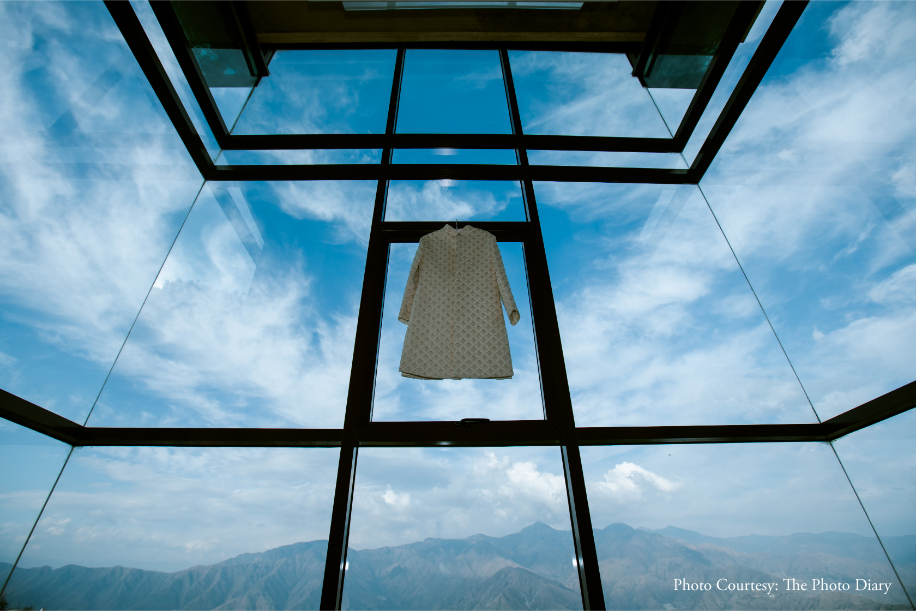 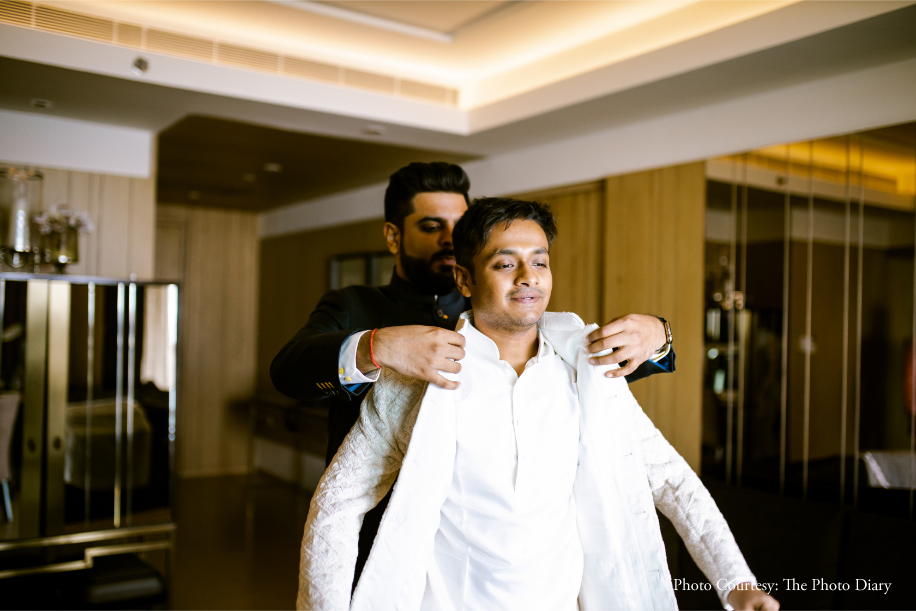 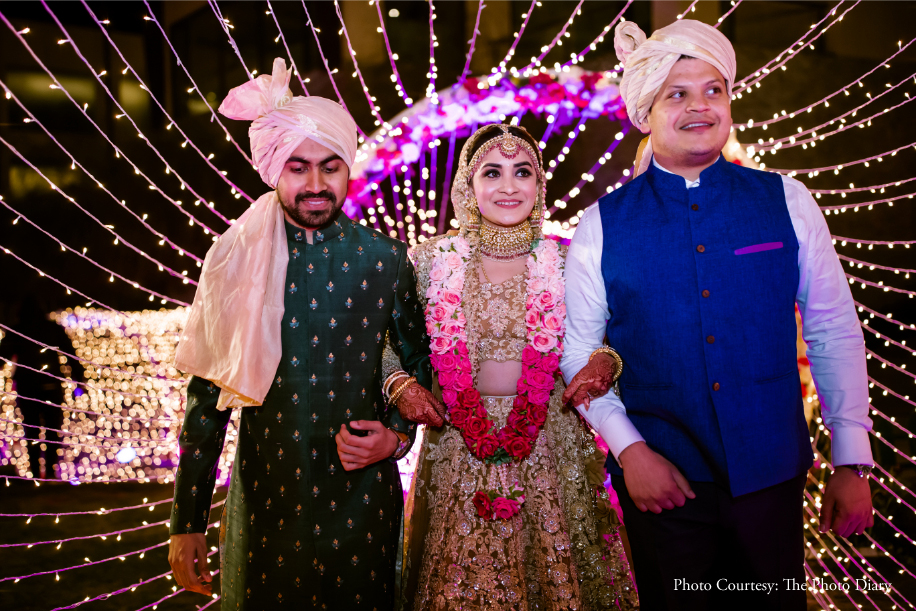 After Party
It was beautiful and boisterous – the party seen the guests let their hair down and dance the night away. Every guest was given a hoodie with the words ‘On Top of the World’ printed on it. The team at The Photo Diary made sure they caught every candid moment thanks to their own instant camera photographer who was on the job through the night, taking pictures and giving them away to the guests.