Abhin and Sama’s lavish three-day nuptials created a splash at the serene and sprawling InterContinental Chennai Mahabalipuram Resort with its pool party, wedding ceremony by the beach and waves of revelry. Here are some highlights of the grand affair planned by WeddingSutra Favourite Innovision. 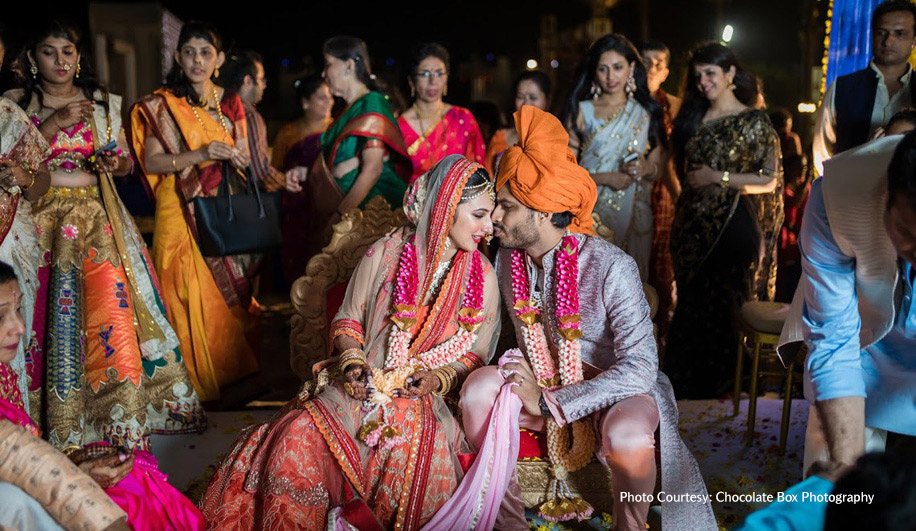 How We Met
“I met Abhin around five years ago at a common friend’s New Year party. I found him extremely funny and kind. We started texting, meeting, dating but never with the intention of settling down. As people, we are diametrically opposite. He is rock and roll, I am all Bollywood. He is a night owl, I love mornings and many more examples. Therefore, no one, including us thought it would last. I then decided to move to New York for my MBA. Within six months of moving away, both of us realized that in spite of the distance, at the end of the day, we still wanted to talk to each other. At times, we would talk more when I was away as compared to when I was in Mumbai. Long distance really tests one’s relationship and that’s when you need to decide if it’s worth it.”

The Proposal
“After one year of me moving away, we knew we wanted to get married. I suggested he should propose after my graduation and was quite convinced he would do exactly that. During my summer break, we went to Miami where my sister stays. He knew exactly how much I loved that place and little did I know what he had planned. One evening he insisted I dress up and we go to a restaurant by the beach for dinner. We had the perfect outdoor seating table and the sun was just setting. But knowing our luck, it started raining and we were ushered inside the restaurant. Here, Abhin kept insisting that we go out for a walk and asked the manager to get an umbrella. I was quite perplexed by his behavior but still had no clue of what was about to hit me. So along with the manager equipped with an umbrella, we went outside and luckily it had stopped raining. I told him, ‘Why on earth are we in this rain?’ To that, he calmly turned around, went down on his knee, opened the box and said, ‘So that I can ask you, will you marry me?’”

Wedding Venue
“We always wanted a beach wedding which was easily accessible. So our options were limited to Goa, Kerala, and Chennai. However, none of the hotels we visited at the first two places were working out. A friend suggested InterContinental Chennai Mahabalipuram Resort on the East Coast Road in Chennai. As soon as we entered the hotel, met the staff, saw the rooms and then the beach, we knew it was the perfect venue! The hotel has a perfect balance of modern and quaint designs and with the help of our Wedding Planners Innovision we were able to achieve the wedding of our dreams.”

Mehndi and Pool Party
“The mehndi was held in the area which was in the middle of the Algae pond. My idea was to have some bright colors but not the typical yellows and oranges. We also had a tarot card reader and a caricature artist to keep the guests entertained. For this function, I chose a cape dress by Anushree Reddy. On the pool side, the vibe was completely different. We wanted a carnival feel that would still be in sync with the mehndi decor next to it. So we had games like Jenga and beer pong for the pool party.” 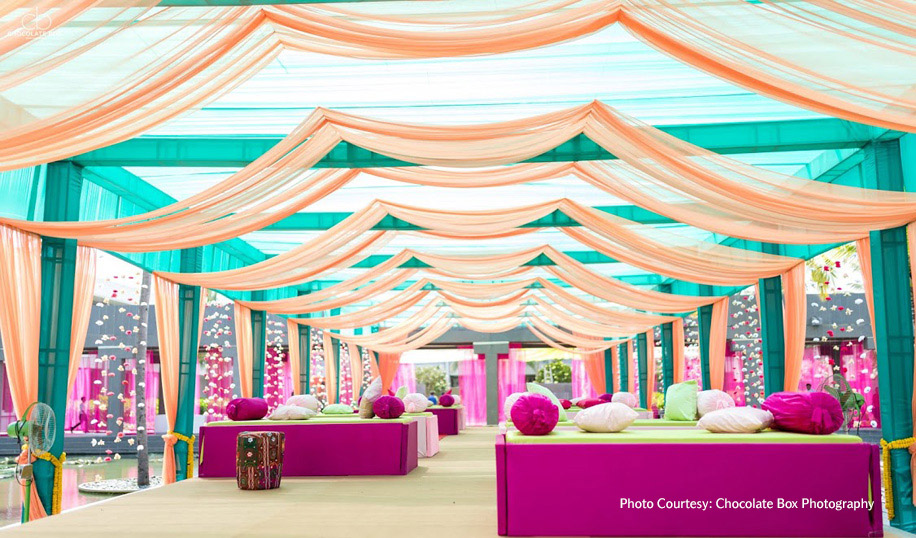 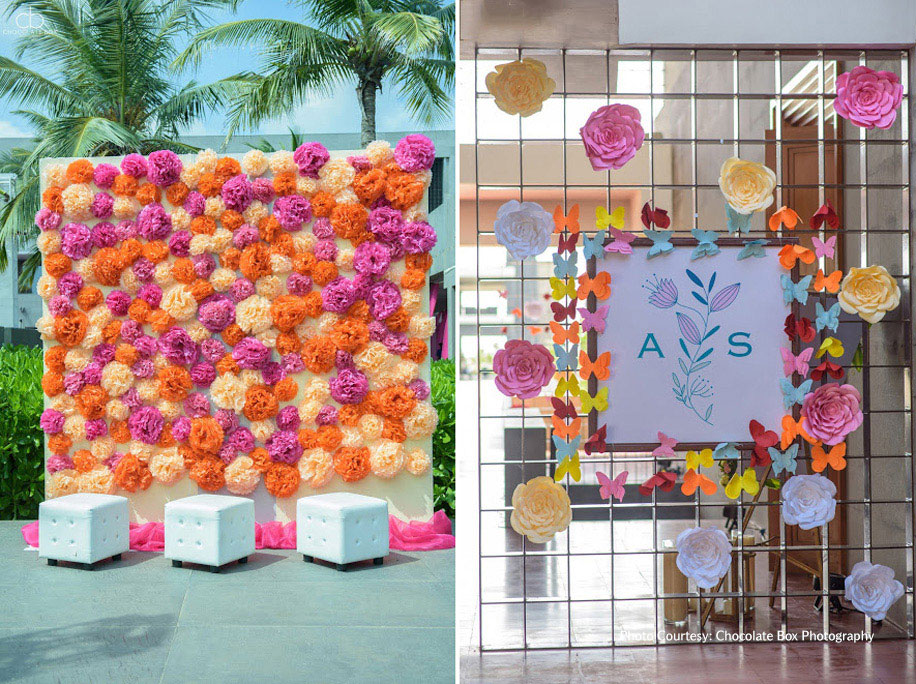 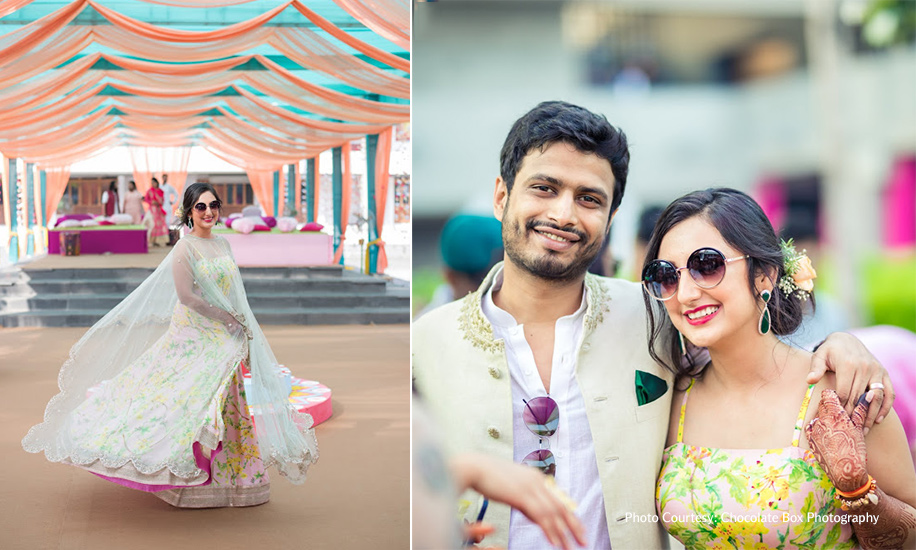 Sangeet
“Since the hotel has myriad venues, we did not intend on repeating any place. We hosted the sangeet in the ‘Sama’ garden of the hotel. It was a beautiful amphitheater and instead of the usual screen backdrop, our wedding planner suggested having cloth drapes with projections on it. My main concern was to wear something in which I could comfortably dance. After months of hunting around, I finalized a Falguni and Shane Peacock creation which I got customized in a powder blue color.” 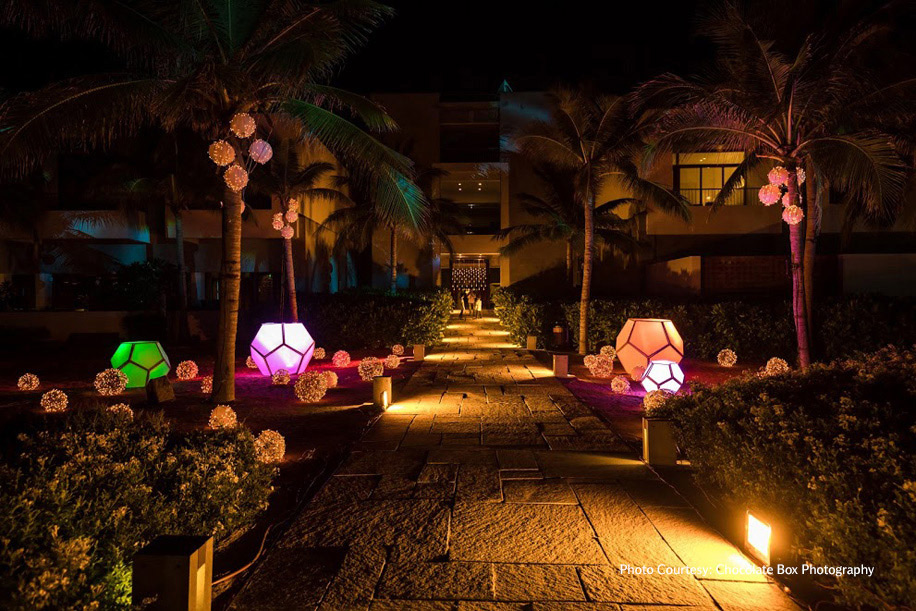 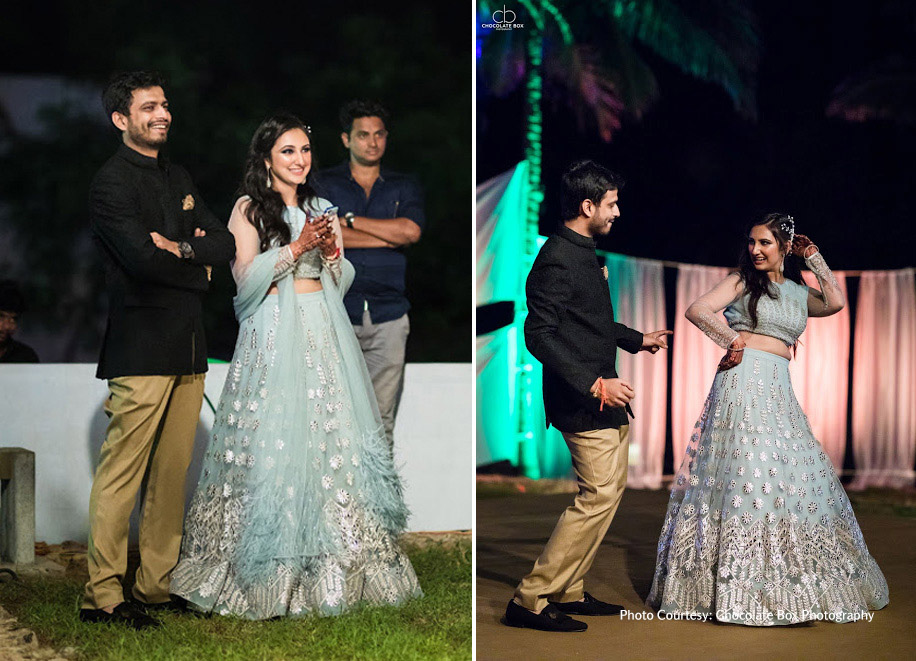 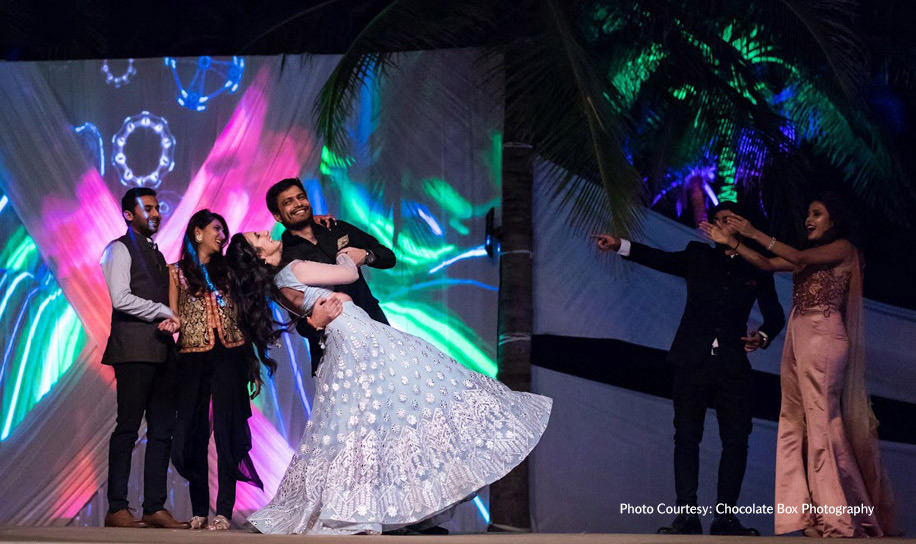 Wedding and After Party
“The wedding mandap was on the beach. For the theme, we went for the English teal and corals with a few Indian elements. During the ceremony, we had hired an instrumental band called Vayali from Bangalore. They are a part of an NGO and use instruments made out of bamboo. This music combined with the sound of the ocean created the perfect ambiance. Since the wedding was in the evening, we also hosted a post-wedding beach party with a live band. Abhin is a drummer so during one of the performances he went up and played the drums. After the wedding, everyone changed into comfortable beach wear for this and just let their hair down. With the wind in their hair and sand in their toes, it was the perfect end to the three-day event. My customized wedding lehenga was by JADE and I fell in love with their gorgeous creations during their bridal show. For the post-wedding beach party, I wore a one-shoulder dress by Masaba.” 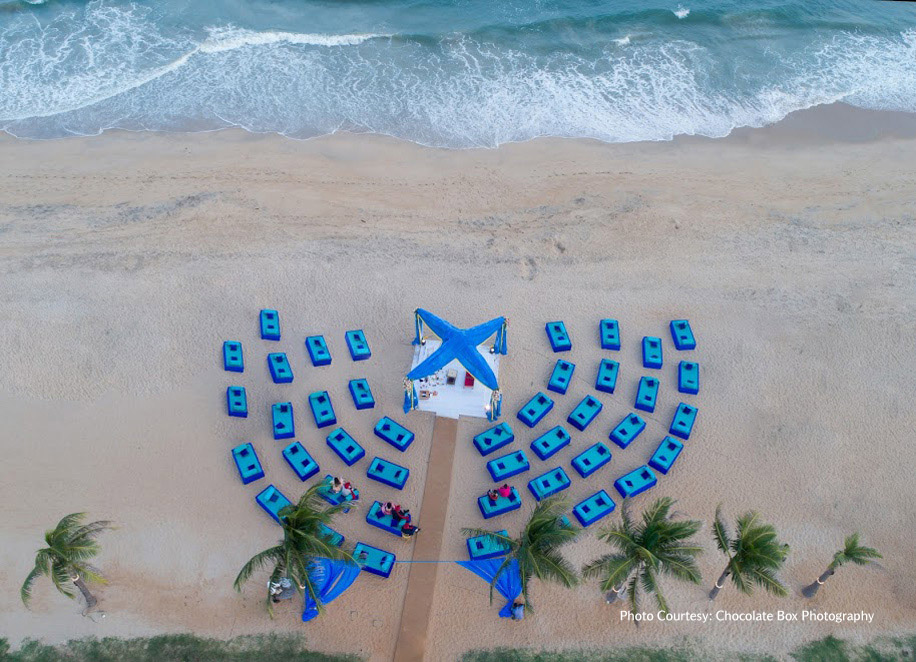 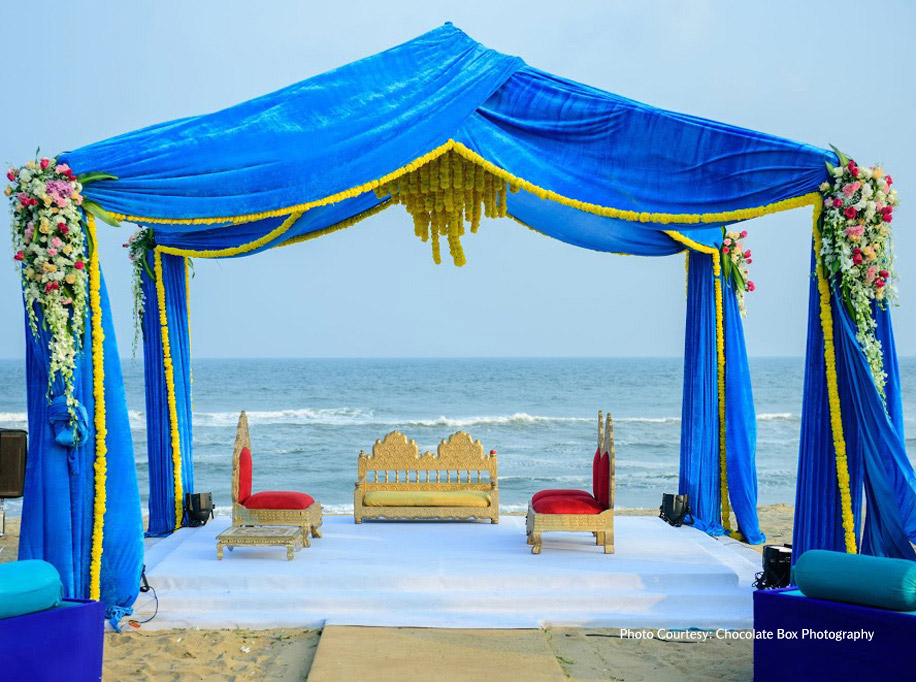 Advice for Couples
“All the planning may get stressful and overwhelming at times, but it is important to let go of the smaller issues and focus on the bigger adventure. For the brides, before the wedding, you can go as ‘Bridezilla’ as you want but during the wedding just enjoy every moment of it. Something or the other may go wrong but at the end of the day, all that everyone will remember is the love and the smiles.”