This lavish wedding was a heady mix of Malayalee traditions, Thai wedding rituals and power-packed musical performances in Phuket

The father of the bride – Mr TS Kaladharan, chairman of the Dubai-based CSS Group knew that he wanted his daughter Sasikala to wed Britto in a location he was particularly fond of – Phuket, the idyllic paradise in Thailand.

Dubai-born Sasikala joined the family business after doing her graduation from Singapore’s Raffles Design Institute and currently heads the marketing division in Dubai. Britto was born and brought up in Kerala, and works as a research scientist at Montan University, Austria, after graduating from Nottingham University with a degree in aerospace engineering. The marriage was fixed by both families in November 2015. 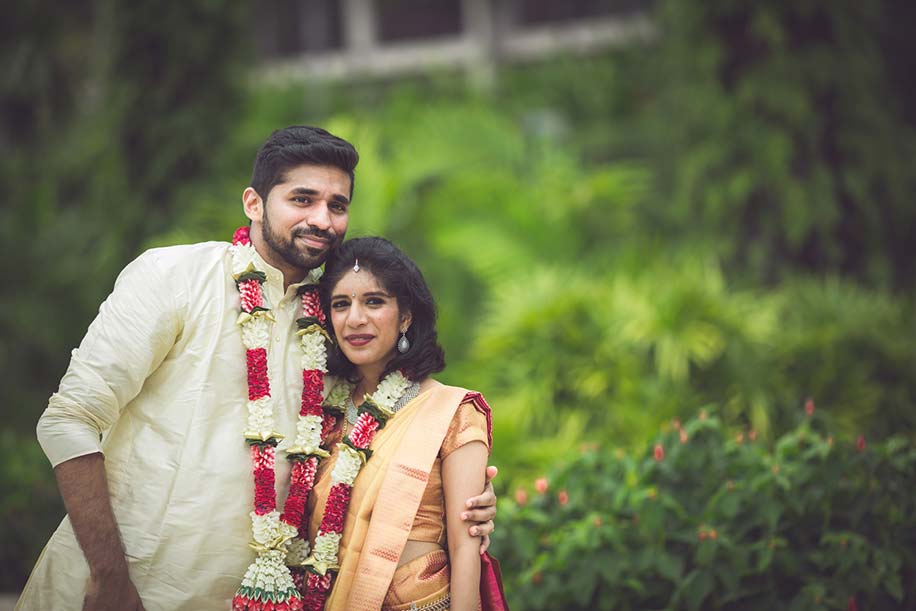 The wedding invites by Mumbai-based Mars Arts were in the shape of an ivory and pink box with an invitation card and agenda details. One compartment of the box also contained colorful Sri Lankan lungis and customized sunshades from Dubai that were gifted to guests to wear at the sangeet.

A wedding website was created to provide all the information about the event. It was the hub where guests, who were coming from all around the world, could check about their hotel rooms, airport transfers, and dress codes for different events. Pallavi Devika, the renowned bridal make-up artist, and her team were flown in from New Delhi for the bride and her family. 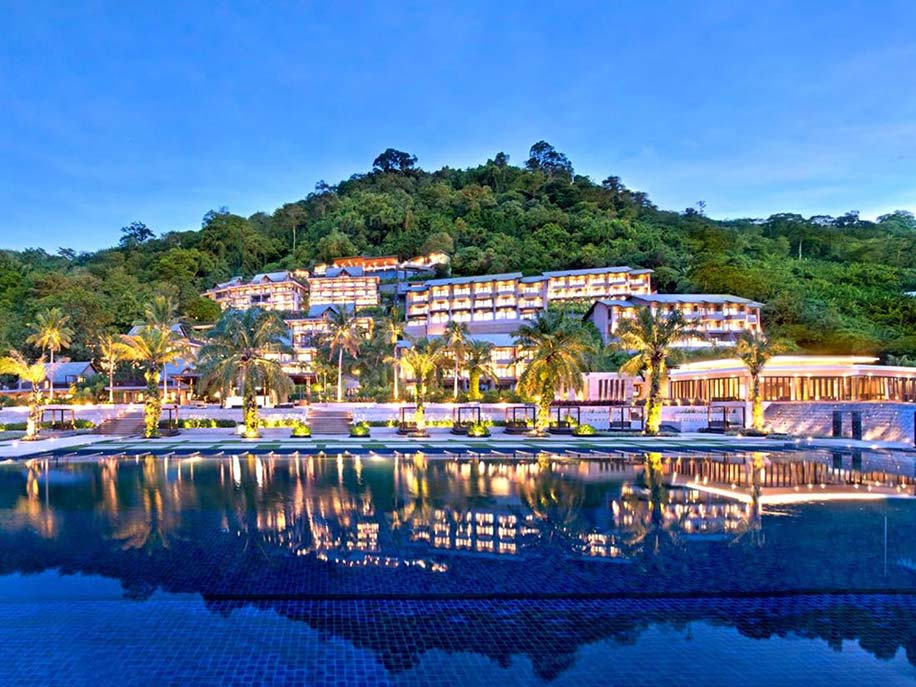 Mehndi
The first event was a ‘Daawat-E-Mehndi’ which took place on the lawns of the Dusit Thani Laguna hotel. The venue was highlighted with Thai parasols, paper flowers, and satin drapes. The couple was accompanied to the venue by Serng Kratip Khoa performers – North Eastern Thai long drum musicians and dancers. The event ended with guests dancing to Bollywood music by Kerala-based DJs Ryan & Shamil. 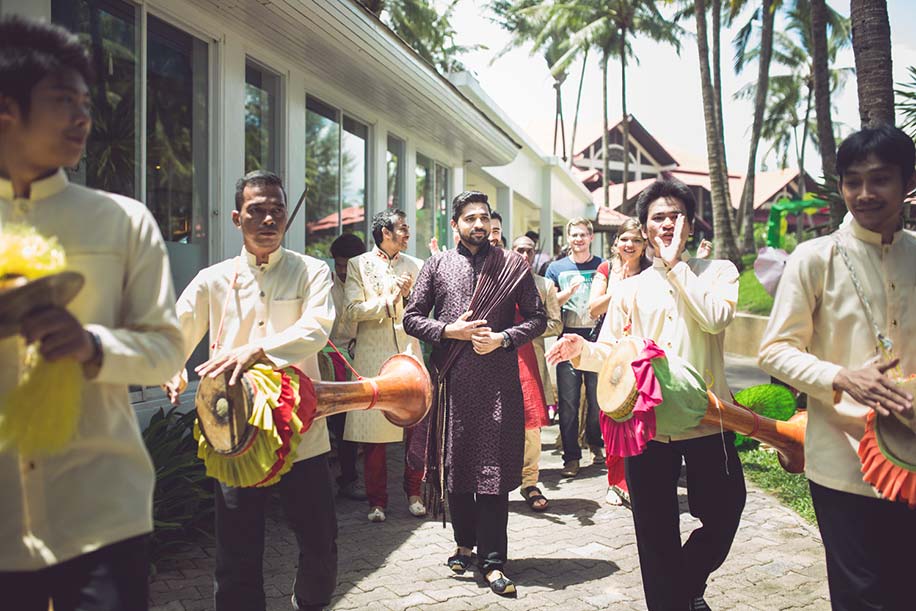 Sangeet
The sangeet with a ‘Why This Kolaveri Nite’ theme was held in the evening at the Hyatt Regency hotel poolside and the venue was vibrant with a graphical LED wall and alpha beams. Comperes Poojitha Menon and Rohini Idiculla stirred up a fun, competitive contest between the groom’s and bride’s families. A Thai tuk-tuk transported the couple to the stage and they were welcomed by guests waving long colorful balloons. The couple and their friends danced to choreographed numbers and the rockband Thaikkudam Bridge kept the gathering on their toes. The ‘after party’ followed till 4 am, and saw a host of musical performances by Sooraj Santhosh & Varun Sunil of Masala Coffee and the ever popular Thaikaaudam Bridge. The bride’s father also sang some songs from the yesteryear. 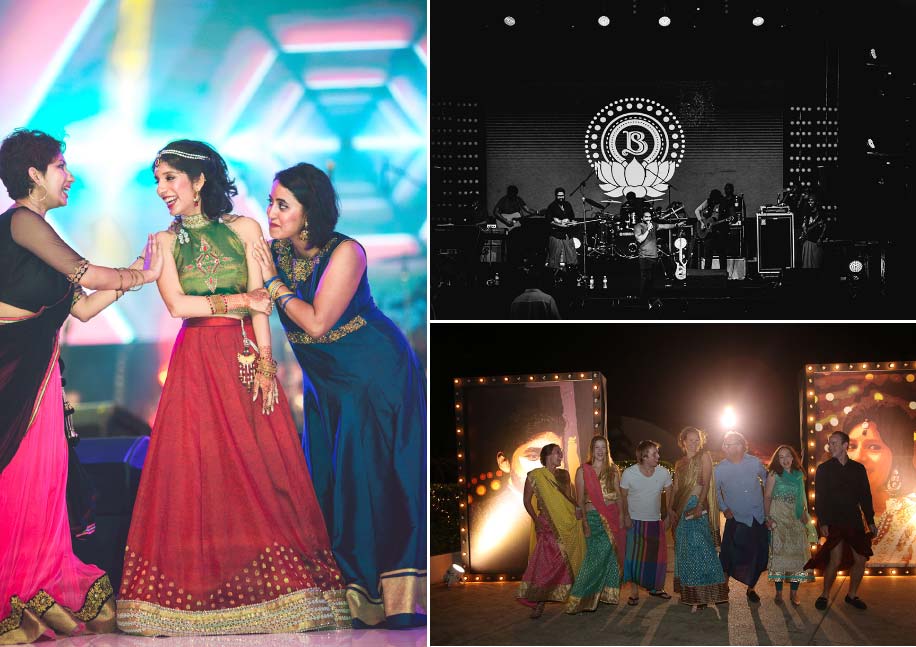 Wedding
The couple then tied the knot in a traditional Kerala Hindu ceremony where guests enjoyed the lavish ‘Sadhya’ (vegetarian feast served on banana leaves) which was called the ‘Maangalyam Sadhya’. A first time in Phuket, Kerala’s well-known chef Noushad was roped in to create the traditional ‘Sadhya’ on the wedding day. He whipped up 30 different dishes with the help of Chef Alessandro and his team at Hyatt Regency.

These traditional wedding rituals took place at the Hyatt Regency ballroom. The mandap was decorated with banana leaves and a floral Ganesha took pride of place in the venue. Family and friends dressed in the traditional Malayalee mundu and sarees were witnesses to the traditional Thaalikettu ceremony. Sasikala sparkled in platinum jewellery from TBZ. 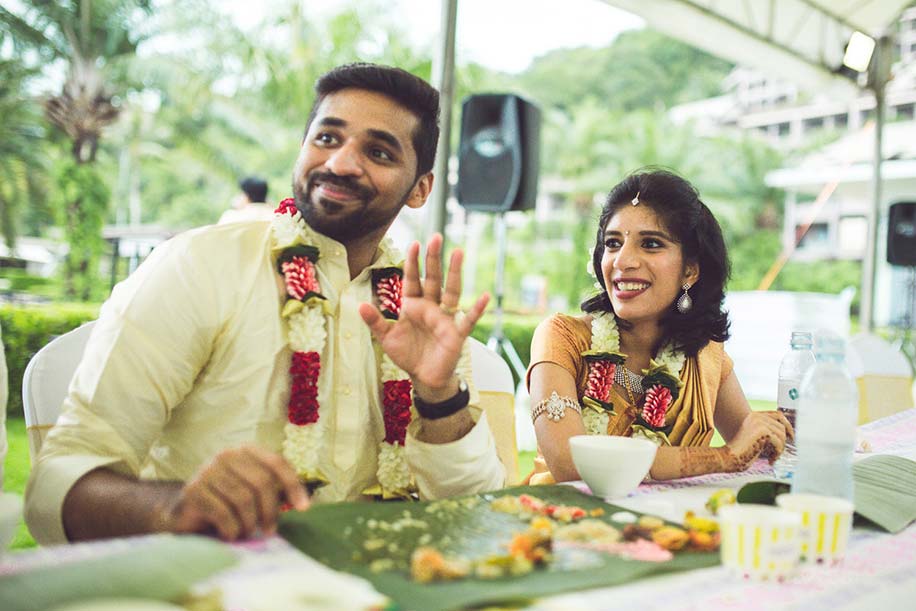 The wedding also included a lovely Thai Water Ceremony at Dusit Thani Laguna where five monks conducted a ‘Monk Blessing Ceremony’ according to Thai rituals. A beautiful ‘cherry blossom’ tree-structure mandap on the beach of the hotel was festooned with flowers and hosted these beautiful customs. The ‘aisle’ was also resplendent with vintage carved drums and floral arrangements that made for a pretty picture. 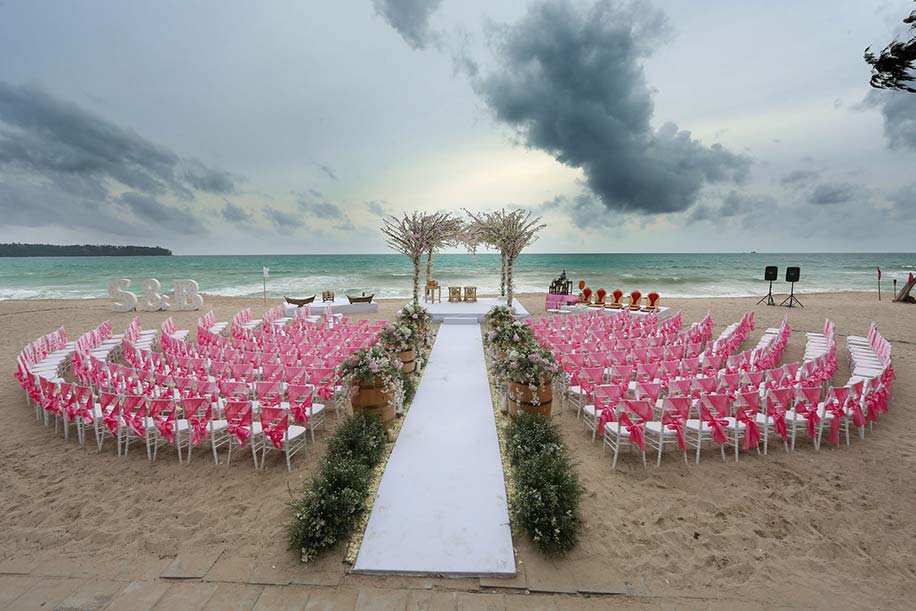 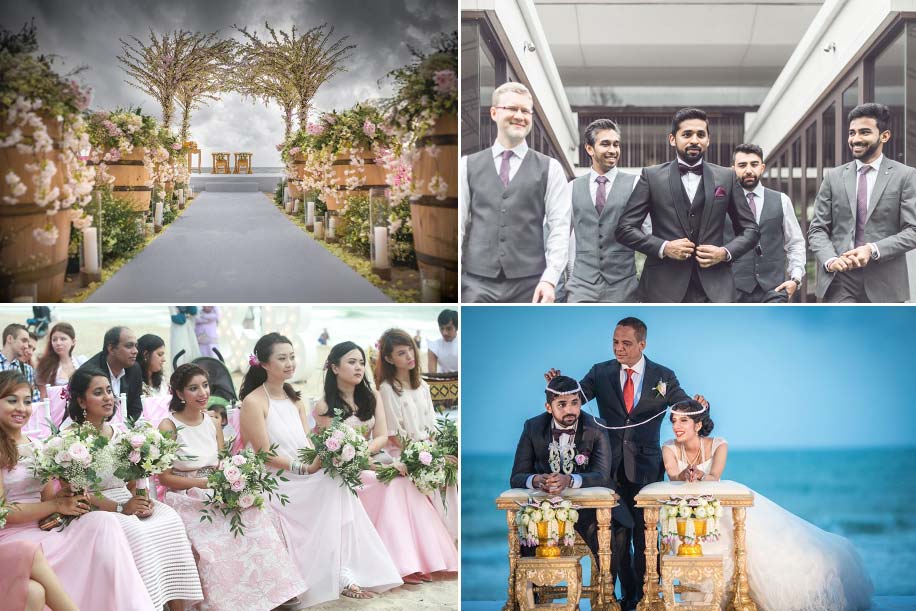 Reception
The wedding ritual was followed by a Western-style reception with a ‘Sakura Ball’ theme. This event had a fairytale vibe with floral profusions, pretty blooms, and stunning birdcages. The bridesmaids and groomsmen danced to welcome the ‘official husband and wife’ to the event. The dress code for this evening was western suits, gowns, and national attire. A specially planned surprise dance dub video was showcased by Keshav. The finale to the celebrations was the musical ensemble by the celebrated musician Stephan Devassy, playback singer Haricharan, Bollywood’s ‘Soprano’ Natalie Di Luccio, lead guitarist Durwin D’Souza, the bass superhero Josy John, percussionists Arun Kumar & Jobin Thomas and Ghatam player Giridhar Uduppa. 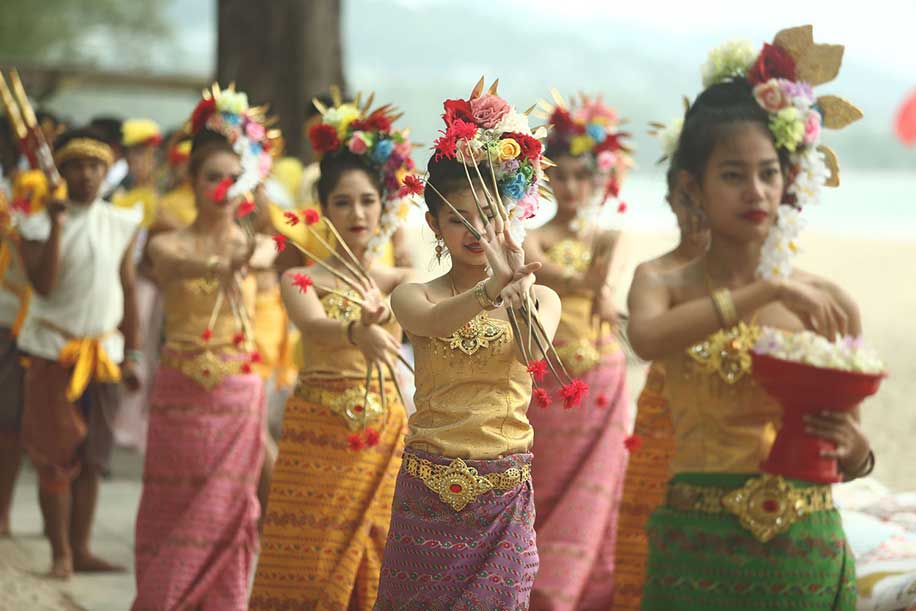