Soumya and Bryan's evocative cross-cultural wedding took place in regal Jodhpur and was rich with local flavor, color and customs.

From law school to love… Soumya and Bryan’s romance unfolded in the US, but they chose to wed in Rajasthan, India. WeddingSutra Favorite Elite Wedding Planner designed and executed the memorable affair; Check out some of their candid moments here. 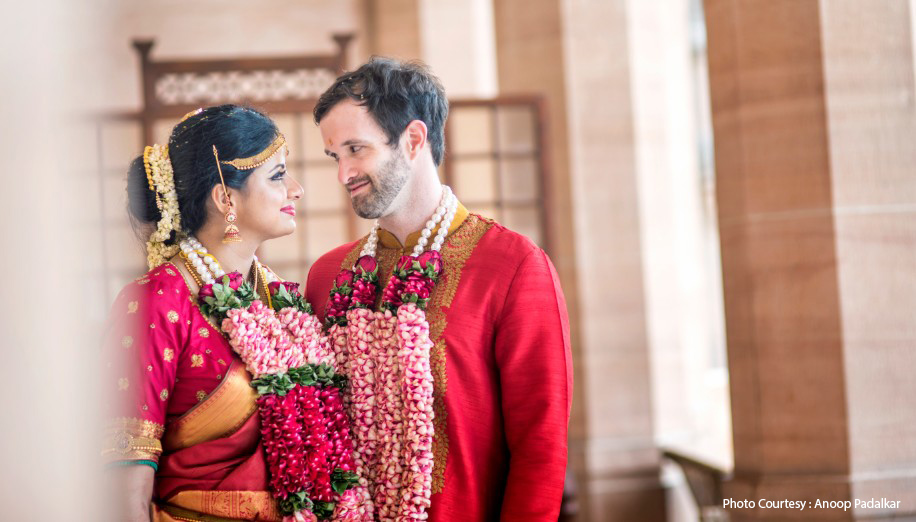 How We Met
Soumya and Bryan met each other at a law school in 2009 and had their first conversation at a bus stop. After class that day, Soumya found that Bryan was the only classmate present there. Despite the fact that they had never spoken to each other, she went up to him and started complaining about the class she had just finished without any hesitation. Eventually, they became friends, and since he lived in her neighborhood, he gave her a ride to college every day. Over time, they grew closer, and their first lunch date was only the beginning of a long relationship.

Proposal
Komi, an American-Mediterranean restaurant in Washington DC, is known for its delectable food and sought-after tables. Bryan had put his name on their list for several days before he got a reservation. When they confirmed, he decided to propose to Saumya on that day. On the day of their dinner, he arranged for a private tour of the Washington National Cathedral. After the show-around, he took her to one of the church’s balconies that overlooks the city and offers a splendid view. Soumya noticed how nervous Bryan had suddenly become and realized what he had in mind. Both of them knew what her answer would be. The moment she saw the ring, she grabbed for it in her excitement, yet Bryan made sure that she said “Yes!” before he slipped it on her finger.

Wedding Venue
Soumya always wanted to get married in India, so she, Bryan and their parents for a property that fulfilled all their needs. After considering a few options, they closed down on Umaid Bhawan Palace in Jodhpur as the families were impressed by the hotel’s warm hospitality and the striking architecture. Brijesh Sharma, he Director of Sales and Marketing at the hotel, was especially helpful and made the process so easy from start to finish. 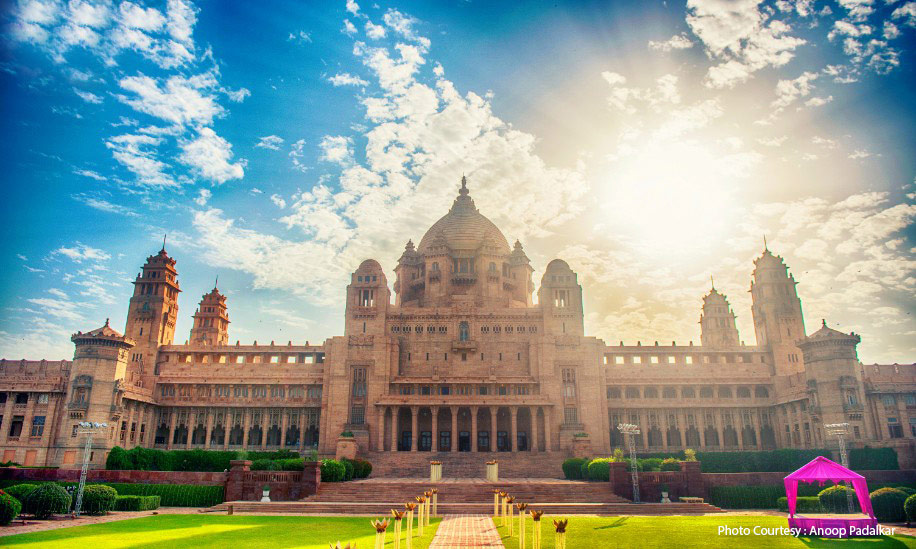 Wedding Planning
Soumya’s father hired Elite Wedding Planners to plan a distinctive and memorable wedding. Elite Wedding Planner are a luxury wedding and event planning consultancy that designs, plans and produces bespoke events across India and internationally. Amina from District Groove in Washington, DC was our choreographer and she did a fabulous job with their sangeet performance.

Sangeet
A regal red and gold setup was created for the duo’s sangeet with ornate arches and rich drapes making the backdrop of their stage. The couple entered the venue in a rickshaw that was followed by a procession. For their first function, the bride opted for a golden gown designed by Sabyasachi while the groom wore a black achkan by Paresh Lamba. Both of them being big Shah Rukh Khan fans, they danced to the hit track, ‘Tujhe Dekha To Yeh Jana Sanam’ from the evergreen hit ‘Dilwale Dulhania Le Jayenge.’ 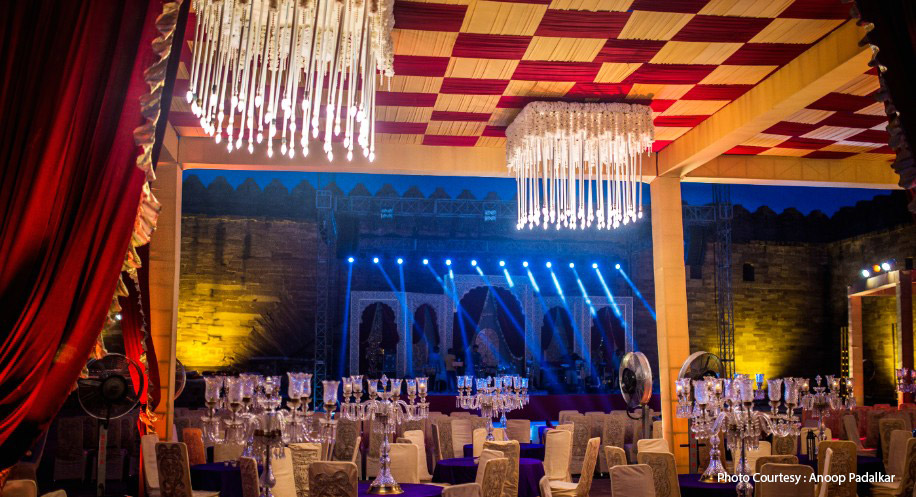 Mehndi
The mehndi followed the next morning and was held at Vivanta by Taj – Hari Mahal. Bright colors formed the decor palette or this function. Marigold blooms and decorative umbrellas further enhanced the pop vibe. The function included activities like cricket, folk dances, henna application and traditional music. Soumya was very keen on having street food at the wedding, and so that formed the menu for lunch. She wore a red salwar kameez by Rohit Bal while Bryan opted for a Blue Bassam kurta. 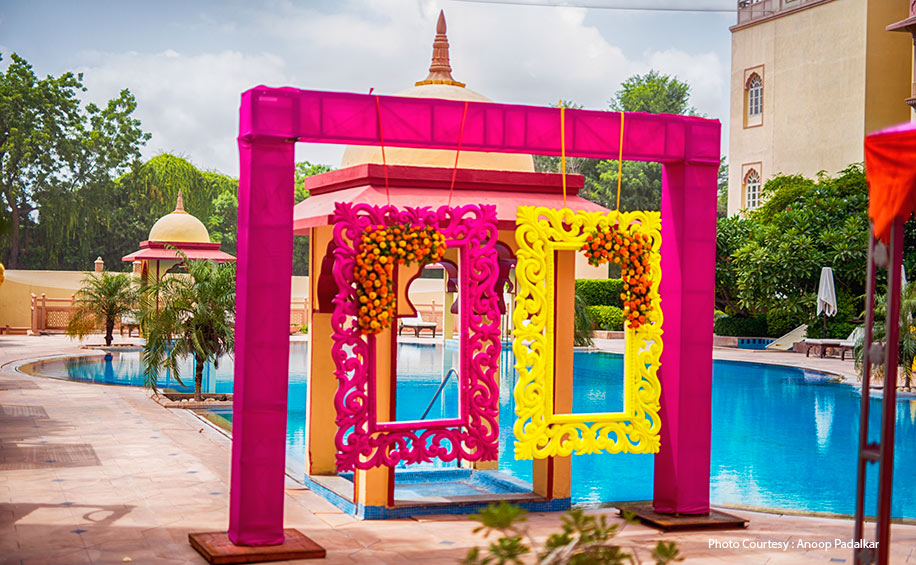 Sufi Night
This was a night of entertainment filled with Sufi singing and lots of dance performances that interpreted Soumya and Bryan’s love story. Blue was the primary color for the decor of the Sufi Night. Golden accents that could be spotted in centerpieces and various other elements. The bride wore a grey Manish Malhotra and a blouse designed by Sitara while the groom opted for a black suit from Alton Lane. 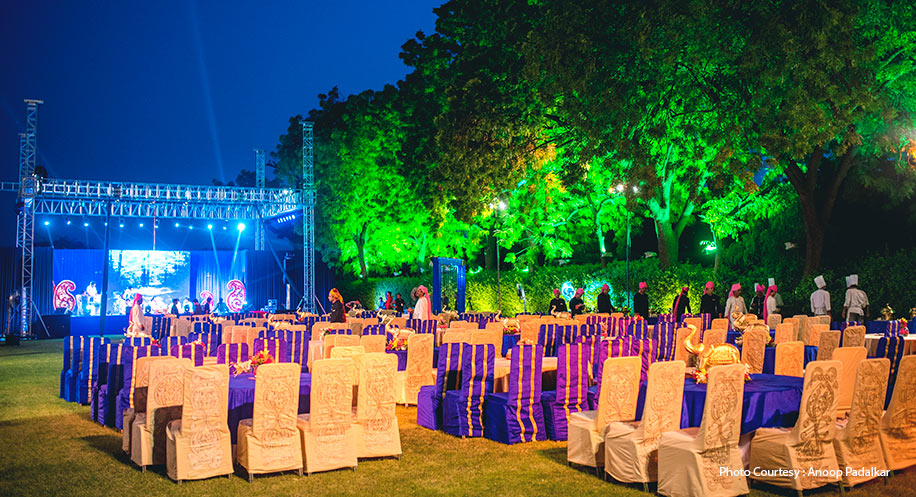 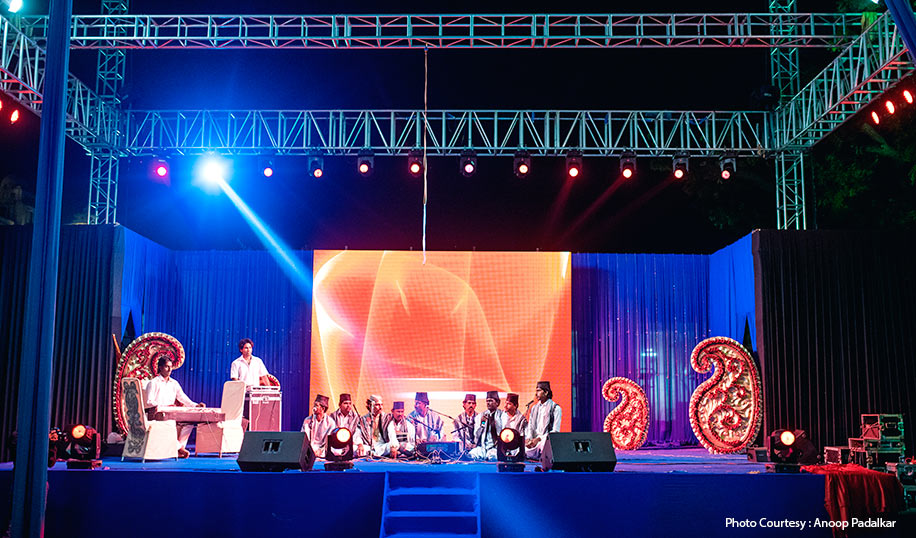 Wedding
The couple followed Tamilian rituals at their wedding, and the decor constituted of fresh flowers. The bride wore a gorgeous gold saree by Sitara and changed into another outfit by the same designer as per the Tamilian rituals while the groom went with a red kurta by Sabyasachi. The lunch was a traditional South Indian meal served on banana leaves which Bryan believes was his best Indian meal till date. The couple organized for foot spas for guests during the break between the wedding and reception. 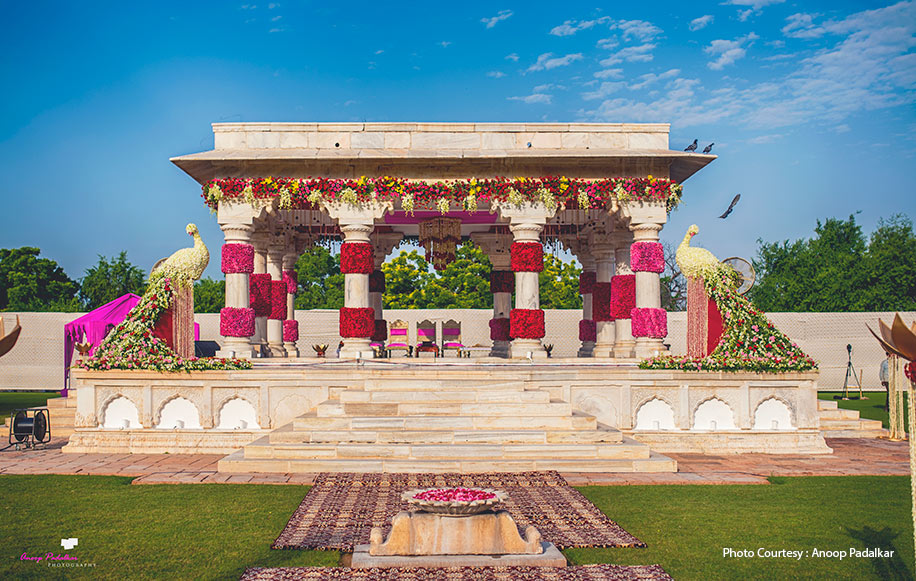 Reception
White made for a big part of Soumya and Bryan’s reception decor with accents of pink bringing in touches of color. The highlight of the set up was a wish tree that was covered in flowers. Guests were asked to write down their wishes for the newlyweds and a tie them to the vines that of the tree. The couple invited the band A26 to entertain their guests. Soumya stunned everyone in another gold saree by Sabyasachi that was paired with a red blouse, while Bryan opted for a white sherwani by Rohit Bal. Advice For Couples
“Don’t try to nitpick everything. Couples should just get with the flow instead of trying to control the whole affair. Have a lot of fun – after all, it’s your wedding!”