From whacky dance performances by youngsters to a charming display of love by the grandparents, Urvee and Eklavya’s wedding in Goa resulted in a host of memorable moments.

Urvee and Eklavya knew that they had found their soulmate with 48 hours of meeting each other. WeddingSutra Favourite Our Wedding Chapter captures their chemistry in candid frames which were proof that their decision was quick, yet correct. The bride shares with us the highlight s of their big day. 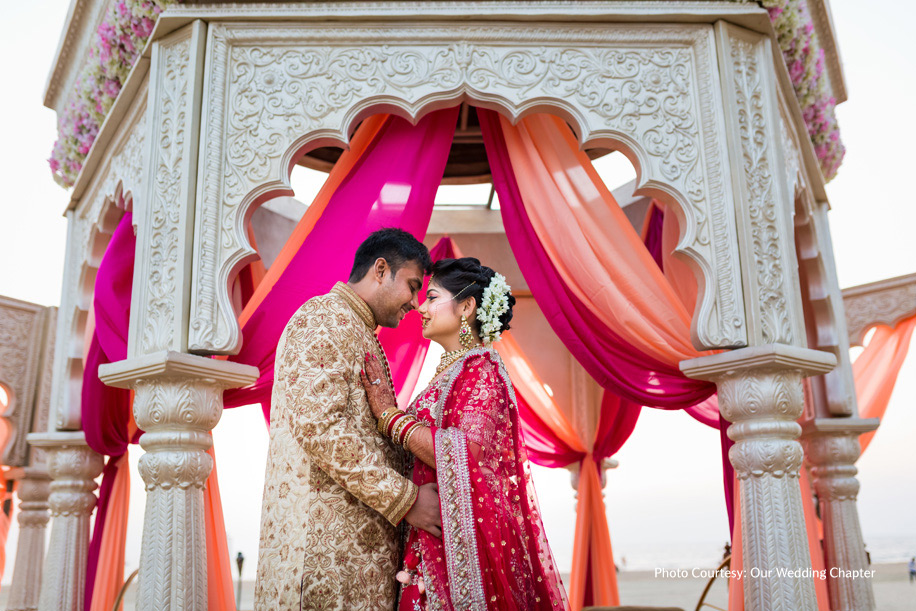 How We Met
“Our mothers were very active on Jeevansaathi.com and were looking out for a good match for us. His mother found my profile interesting and vice versa, so it was decided that we were to meet in Calcutta. The first time we met was with our families, it went well, and his parents invited us to their house for tea the following evening. This meeting went on until dinner time, so all of us went out for a meal again. This time we discovered that both our families loved Chinese food over which all of us bonded a little more, but there was nothing substantial that either of us felt of each other. Both of us went for a drive after this where we barely spoke to each other. The following day I sent the photos that our families had clicked together to his mother and this is where she decided to play cupid. She shared Eklavya’s number with me and asked me to send the pictures to him directly. We messaged each other, and I remember I couldn’t sleep that night because I didn’t know what my decision going to be. However, the next morning, I left him a message saying that I was ready to take this forward if he was on the same page. He reciprocated, and the decision was made within less than 48 hours of meeting each other. Over the course of time, there were a lot of ups and downs. In fact, I would joke with our photographers from Our Wedding Chapter telling them to keep my running shoes ready even on our wedding day. The thing is that I had met a lot of guys for marriage over two years, but he was the only one who understood where I was coming from.”

Proposal
“He did plan a proposal for me, but this is how it went – I was visiting Dubai with my family, and he planned to come there and surprise me. However, his father gave it away to me. I got super excited when I came to know what was going to happen, but I couldn’t fake the same emotion of surprise when he showed up. He saw my reaction, and he knew that I had come of know of his scheme. The whole thing turned out to be very disappointing, so he decided that he had to propose to me once again and he did this on the night of our sangeet and cocktail in front of 300 people. Right before the ring ceremony, he went down on one knee and said that he wanted to grow old with me. It was beautiful.”

Wedding Venue
“We got married at Holiday Inn Resort Goa and were very happy with the team there. All the food was prepared under the supervision of Chef Manjeet, and it was truly fantastic. He isn’t just the Head Chef at the hotel but also leads the Chef’s Association in Goa and has a reputable standing in the industry. Our point of contact at the hotel was Amit who was fabulous throughout and by the time our wedding got over, it just felt like the team at Holiday Inn had become a part of our family. During my ‘bidaai’ (bride’s farewell), Amit told Eklavya to take care of his sister. We added him on Facebook, and he posted a picture of the two of use with an emotional caption on his profile. He truly has come so close to us.”

Wedding Planning
“We knew that we wanted only the best photographers for our wedding. We found Our Wedding Chapter and were very happy with their work. Param and his team have done such a great job with our photographs.”

Mehndi
“For our mehndi, the venue was bursting with colors. Bright hues automatically add a festive vibe to any atmosphere, and so we thought this would be the perfect setup to ring in the celebrations. We also used a lot of ‘gende ke phool’ (marigolds), and to make the photo booth a quirky one, we installed a sunglass frame made out of marigolds with a mustache that was suspended from it. There was a bridal ‘jhoola’ (swing) on which I sat for this function. I wore an outfit by Dolly J, and Eklavya opted for an ensemble from Diwan Saheb.” 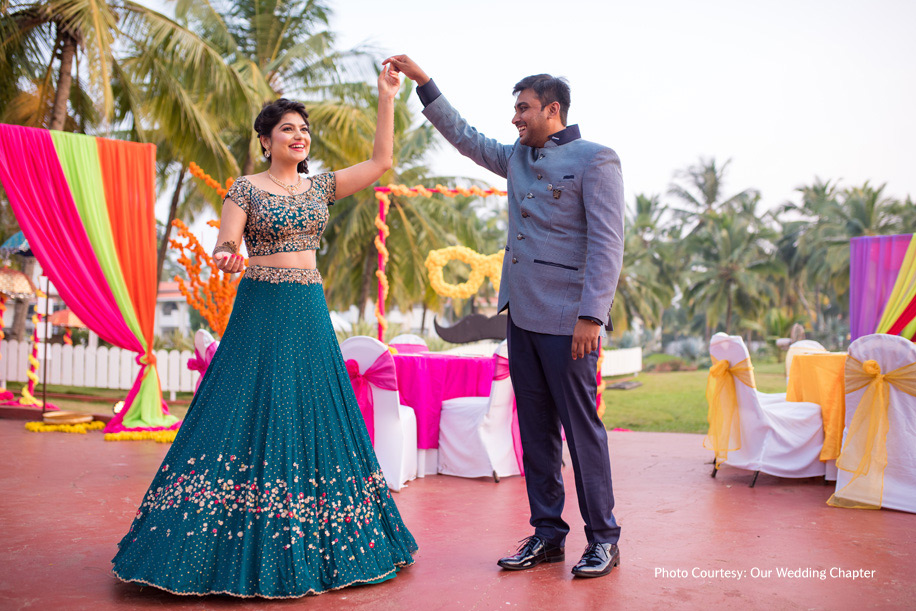 Haldi
“The following morning we had our ‘haldi’ (turmeric application) ceremony that started at 9 am and went on until lunch. Both, his and my ‘haldi’ ceremonies took place at the same venue where one tent had been set up for him and one for me. The decor for this function was inspired by Rajasthan, so we made use of ‘bandhani’ (tie and dye) fabric and added to the flavor by incorporating little Rajasthani elephants and horses to the setup. Outside our tents, we had standees with paisley motifs and our names mentioned on them. My outfit was from a shop in Shahpur Jat in New Delhi, and I teamed that with pom-pom jewellery.” 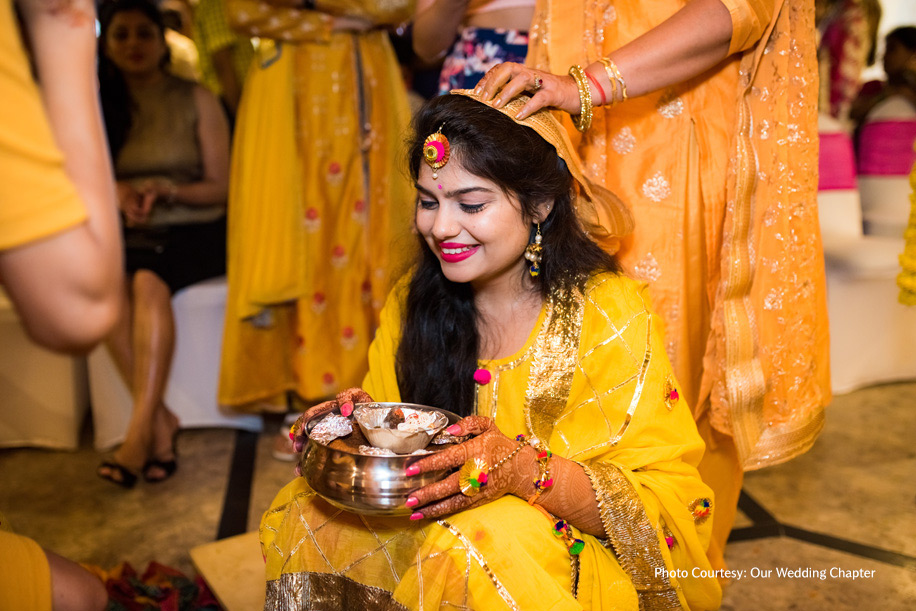 Sangeet and Cocktails
“We had a rustic vintage decor for our sangeet, and the stage featured an arch made of sticks and flowers. To match the mood, I wore a golden gown by Dolly J. I love her craftsmanship and the attention to detail that she puts in each one of her outfits. Eklavya wore a tuxedo from Study by Janak. Both of us entered the venue with the spotlight on us. This was followed by a ring ceremony. Both the rings were picked out by me and I had got a message engraved on each one of them. My niece narrated funny stories which everyone loved and my brothers surprised me with a dance performance. They dance to the popular track of yesteryears – ‘Phoolon ka taaron ka’ and the moment the lines “Ek hazaaron mein meri behna hai” played, they brought on stage an 8-feet long printout of the old 1,000 rupee note with my face printed on it. That was truly hilarious.” 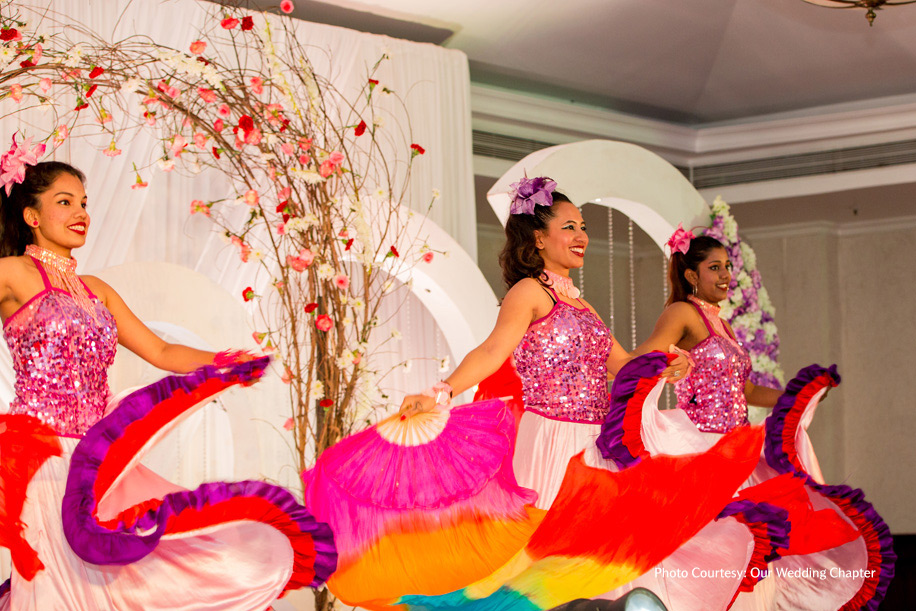 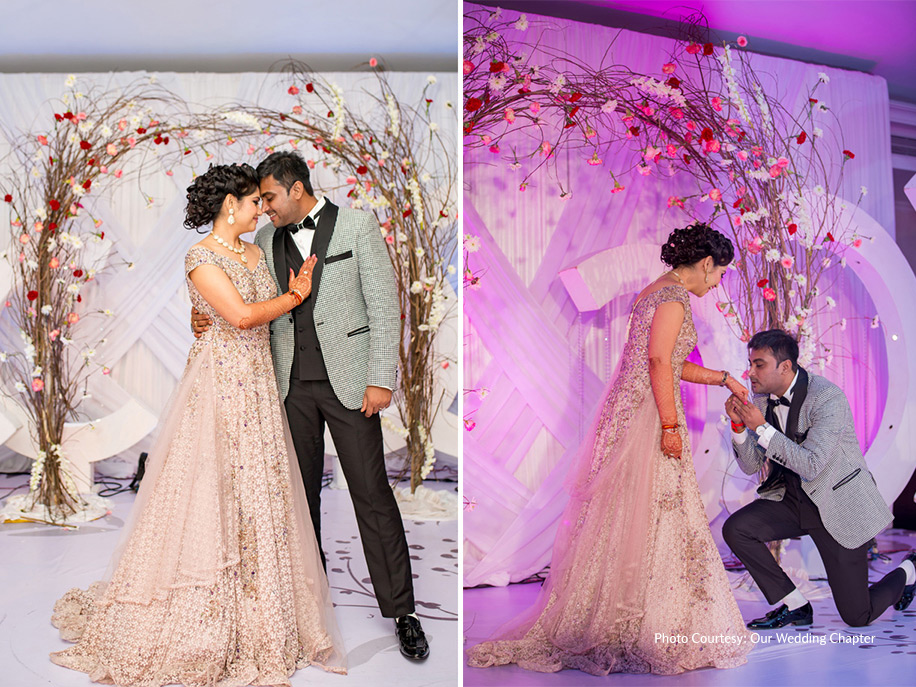 Pool Party
This was one of the most happening events at our wedding. Eklavya and I entered the venue on an All-Terrain Vehicle. We hired a games coordinator who had planned a whole lot of exciting activities for our guests. Great music, a rain dance set up and lots of alcohol rocked this party with bartenders mixing drinks with coconut water and ‘golas’ (iced lollies)! One of the funniest sights at this function was my grandfather bringing beer for my grandmother in a soup bowl so that no one would notice! All of us had such a good laugh at that. The decor had a boho vibe to it, so we had a lot of dreamcatchers, pom poms, and colorful tents to decorate the place.” 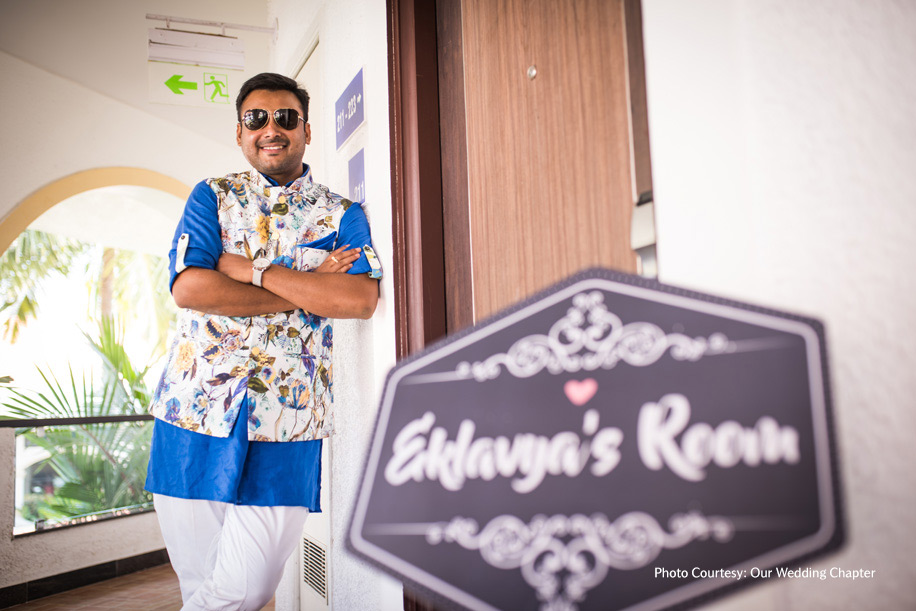 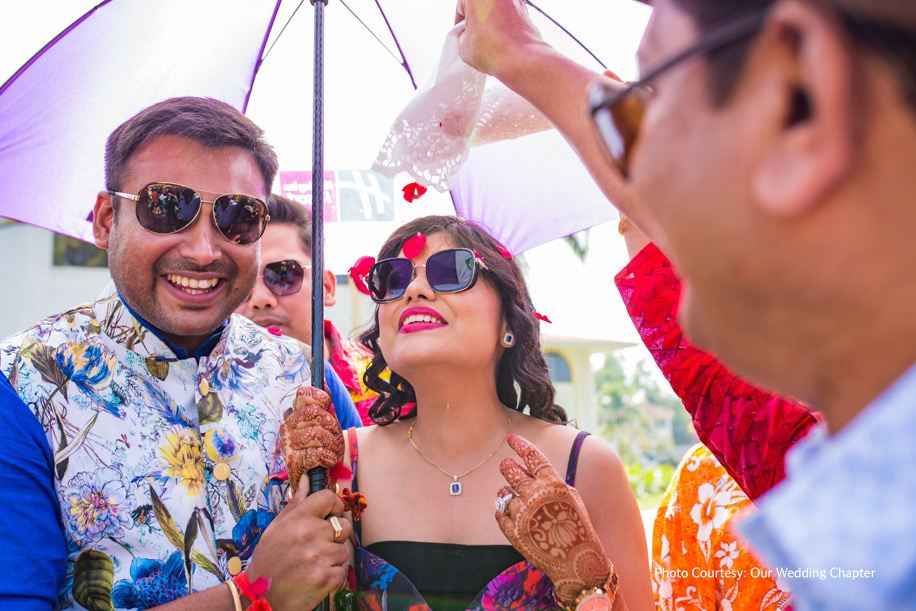 Wedding
“We had our wedding by the beach so that we could make the most of choosing Goa as the destination for our wedding. The decor made the event look like a royal affair. The white mandap was decorated using hot pink and peach drapes. Eklavya entered in a vintage car while I was brought in on a chariot that was evocative of Cinderella’s coach. I wore a lehenga by Sabyasachi Mukherjee while he wore an outfit by Gujral sons.” 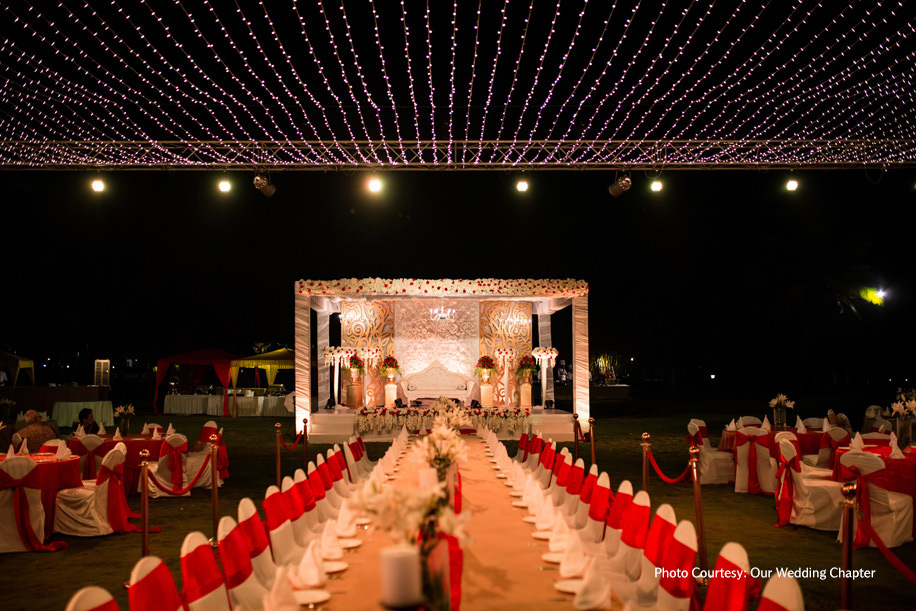 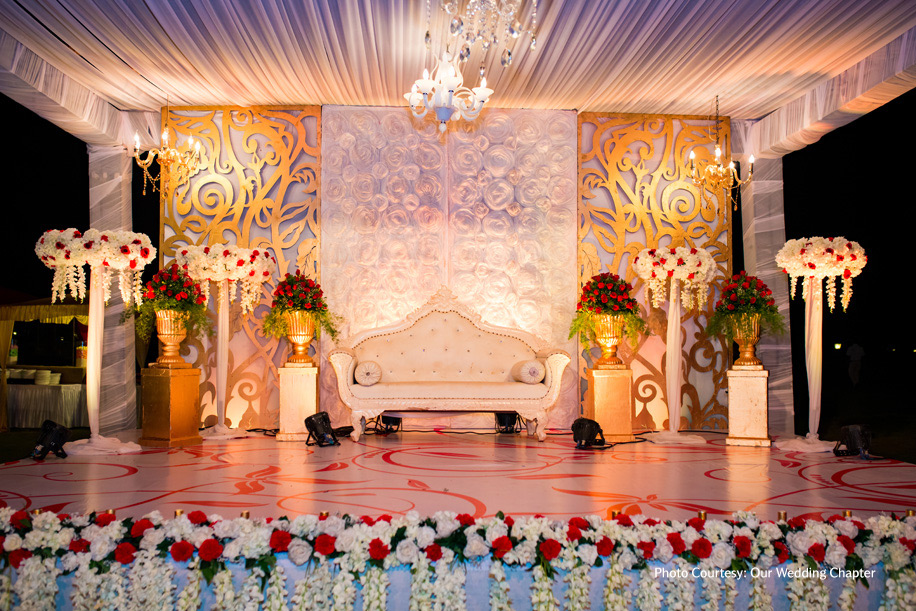 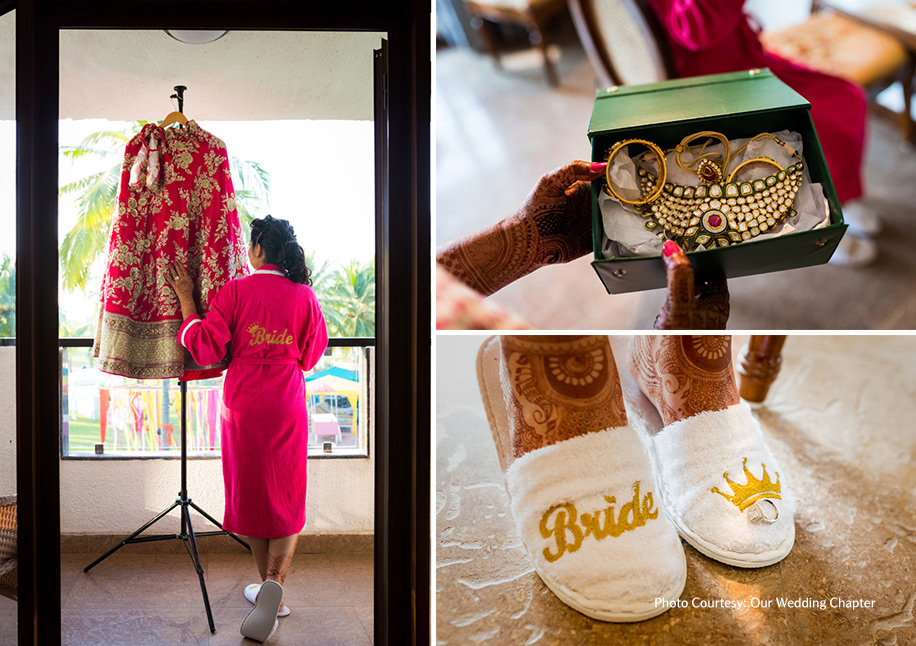