With an eye on gorgeous, nature inspired décor, a mandap swapped for an ancient tree, a unicorn in a pool and some scintillating performances, Aashna and Bhisham’s wedding was a dream come true for them and one that their guests will never forget. Their breathtaking nuptials at Karma Lakelands, Gurgaon were deftly captured by WeddingSutra Favourite WeddingNama.

Aashna shares with us the highlights of the #BhishKiAash wedding. How We Met
“For me, it was love at first sight,” Aashna begins. “I saw him at a pre-wedding shoot after which we had a little conversation. That was all it took for me to realize that he is the one. I called my friend and told her that I would marry this guy and here we are!”

Bhisham had a similar moment, “After the shoot, we met again at the wedding and had a Bollywood moment. I was dancing and hurt my leg and out of nowhere, she appeared and tied a cloth over the wound!”

When they met again in Mumbai after the wedding, that’s where the story began.

Proposal
Aashna smiles, “He proposed three days after Valentine’s Day because he didn’t want to be cheesy! We were traveling in the Philippines and he took me to a private island where he’d arranged for a massage and an amazing meal. Then we went to watch the sunset and there was a table set up and a musician playing in the middle of the water! A crowd of people had gathered and they all clapped and cheered for us when he proposed. It was something straight out of a Bollywood movie and I was entranced.”

Wedding Venue
The couple was married at the Karma Lakelands, Gurgaon. The bride says, “The way the decor by Aura turned out was amazing. We were clear all we wanted was open space and greenery. Nature had to be the key visual element and the place had to be decorated in a manner that enhanced its beauty further. The pheras at the golf course, under a tree was the dream come true for us.”

Wedding Planning
The groom credits the team at Panodrama for their wedding planning smarts and intuition, “We worked very closely with them and they did a fantastic job with our wedding.”

Aashna says they were really focused on the décor for the vibe it brings to every celebration, “At weddings, certain decor elements can be very, very typical so we kept discussing fresh ideas with Gautam of Aura. We wanted to get married under a tree under so it had to be decorated beautifully. We also wanted the decor to reflect our values so a lot of the concept revolved around the same.”

The couple treated their guests to a live performance by Kailash Kher at the wedding because Bhisham had proposed to Aashna to his song.

Mehndi
The couple’s mehndi was a day event and they wanted a fresh, lively vibe. The bride says, “Powder blue, baby pink, and white were the central shades used across various decor elements. A canopy was set up in the lawn, with its pillars covered in green leaves, white stripes suspended from the ceiling, a white floral backdrop with our wedding hashtag and a swing for us to sit on. For this function, I wore a Manish Arora lehenga with a blouse designed by ApurvaXoxo. Bhisham’s outfit was designed by Ajay Kumar from Bangalore.” 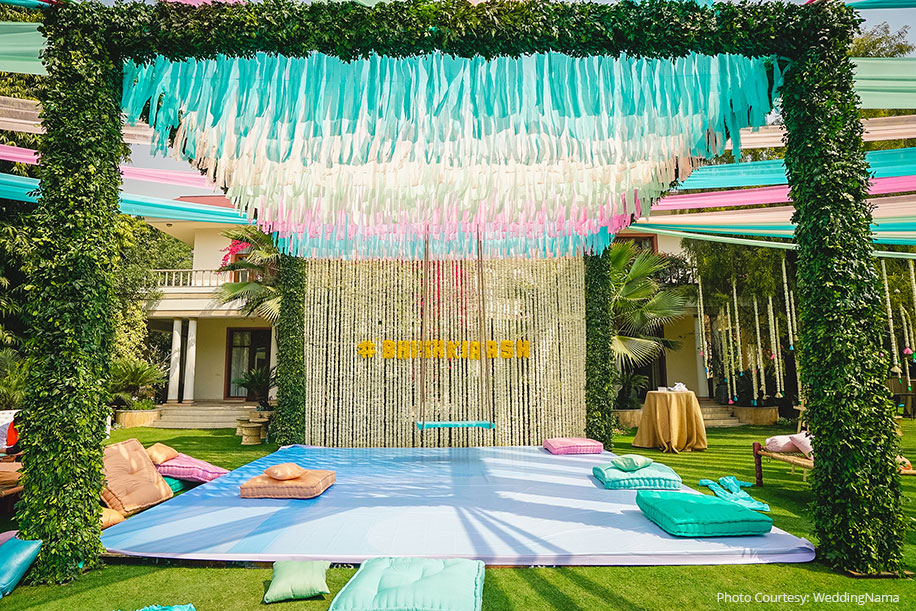 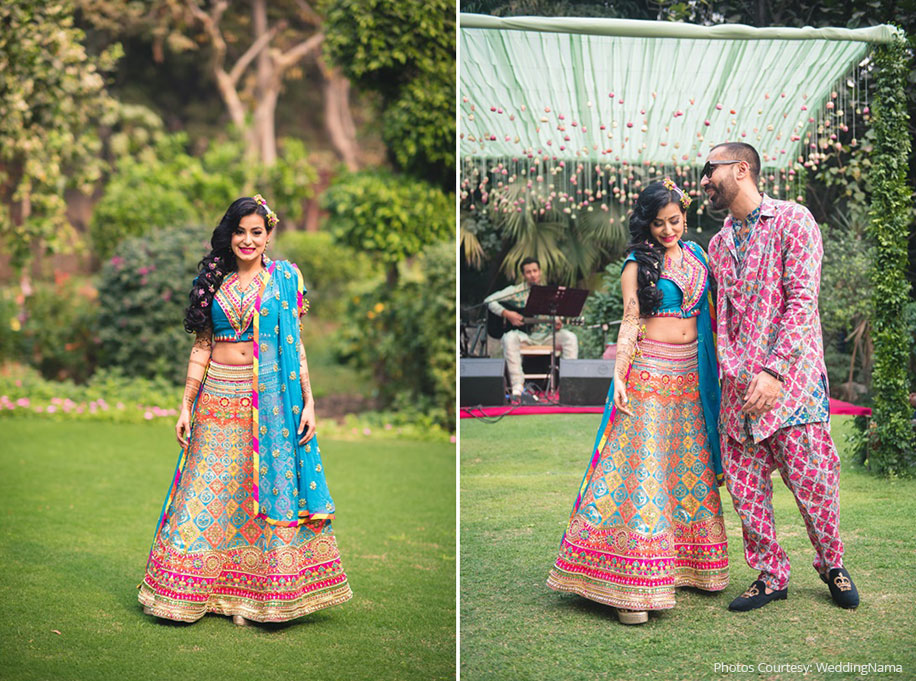 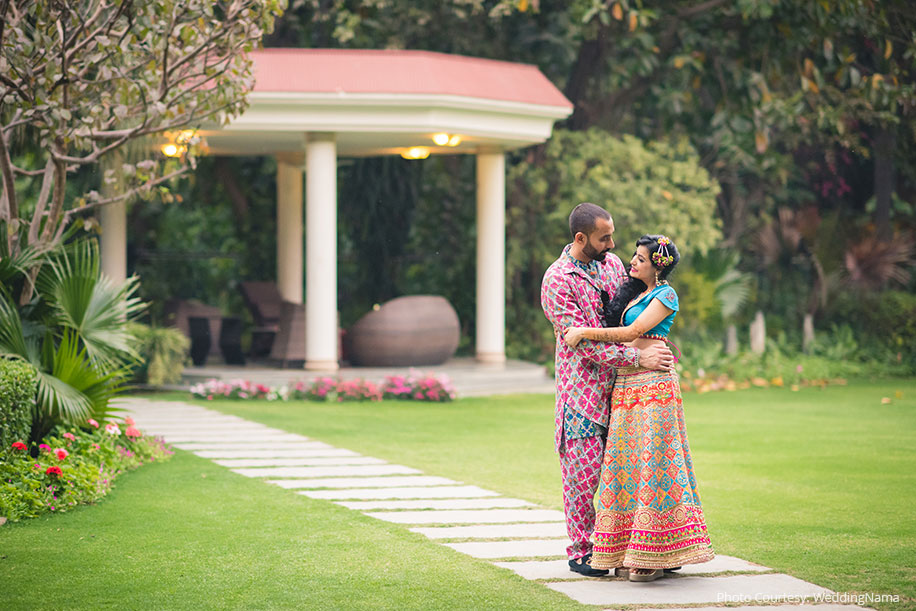 Sangeet
The focal point of the sangeet decor was the unicorn set up in the middle of the pool. A blanket of fairy lights hung over the structure and the candles on the platform bathed the setup in a surreal glow. Behind the main stage was a colossal LED screen that matched visuals to the mood of the songs. The night saw several performances and lots of dancing.

Aashna wore a lehenga by Papa Don’t Preach By Shubhika that featured creative input from both bride and groom! She says, “It was bright, kitschy and truly one of a kind. Bhisham, on the other hand, went with a neutral color and opted for a black outfit by Kanav Davar from Gurgaon.” 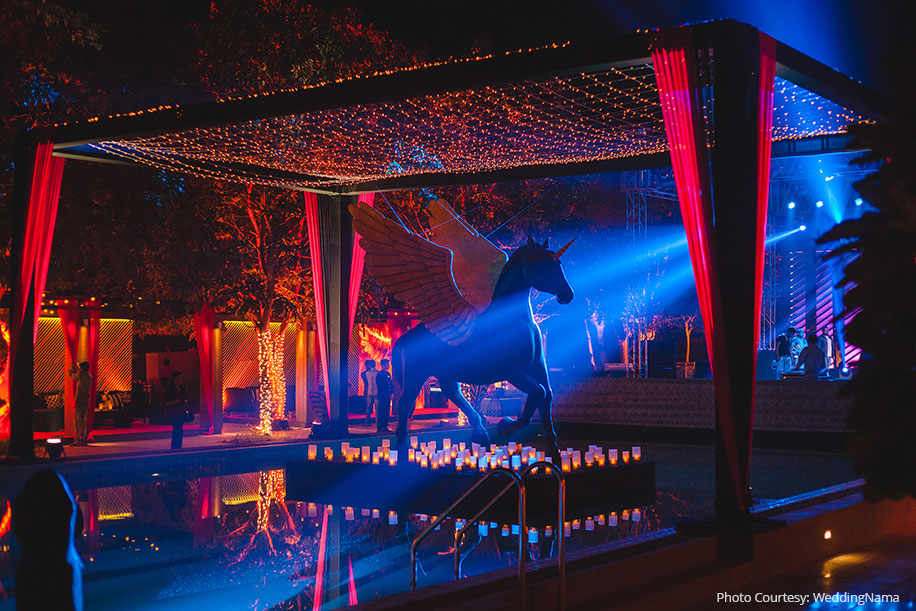 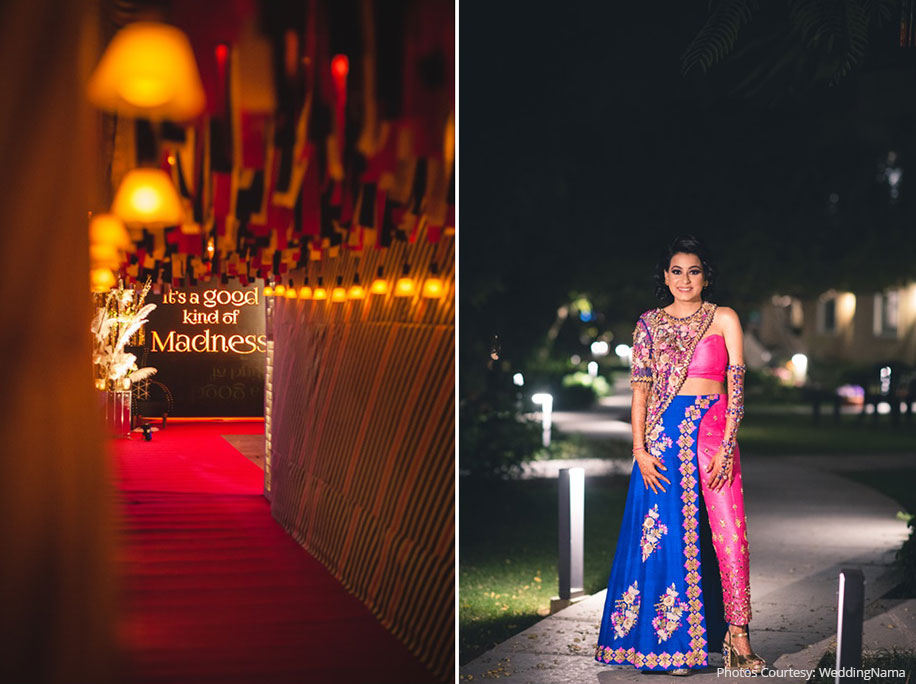 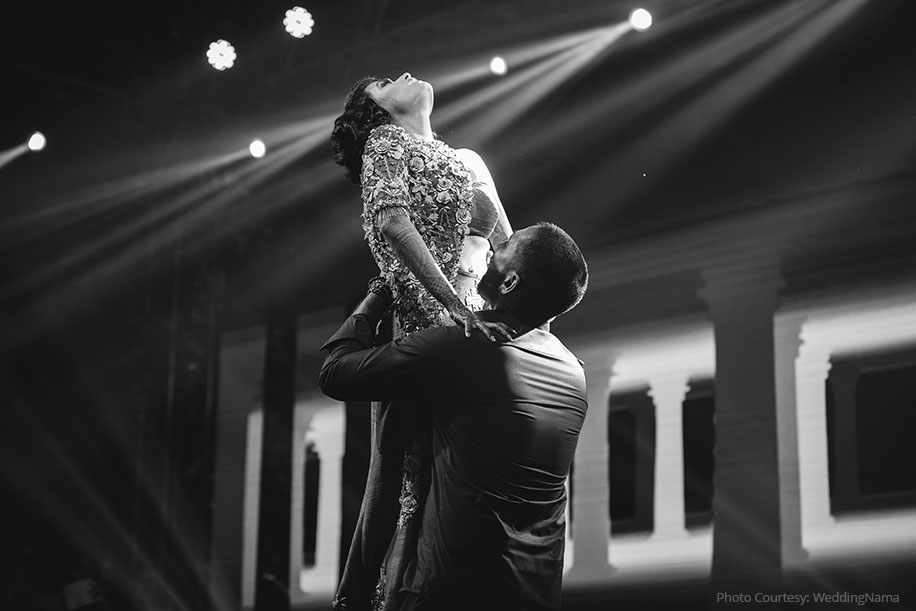 Wedding
Aashna says that since the wedding was in the day, they chose colors that were easy on the eyes, “We paid a lot of attention to creating a set up that was nothing like anything else. One of the most radical alternatives was swapping the mandap for the shade of a ginormous tree for our pheras. The trunk was engulfed in a swirl of flowers and light drapes and elegant chandeliers festooned the branches.”

As for her lehenga, she says, “I have always dreamed of wearing a lehenga with my husband and my names embroidered on it so selecting the designer who would customize my wedding outfit was easy. I wore a creation by Koecsh by Kresha Bajaj and Bhisham picked out a pink outfit by Kanav Davar from Gurgaon.” Advice for Couples
It’s easy, she says, “Get a good wedding planner on board. When the wedding is far away, you can often feel like you will be able to manage everything very easily, but as the dates come closer the pressure increases and soon it doesn’t feel all that simple anymore. There is a lot of work that goes into putting up a wedding and wedding planners are experts in making your day special by taking the load off you and leaving you with the fun parts of the wedding.”